I do a weekend recap every week, and I did this past weekend's on Monday.   But in keeping with the format of other Day in the Life posts I've done, I'm going to go through Saturday again with a little bit more detail.

Q and I were up at 6:00.  No luck getting him to go back to sleep in our bed, so we got up.  I put on an episode of Downton Abbey while Q played around on the floor.    Then it was breakfast time.  I usually just blend up whatever fruit we have to add to Q's cereal.  I'm sure he could handle eating bits and pieces on his own but I feel like he should keep on with the iron fortified cereal for now. 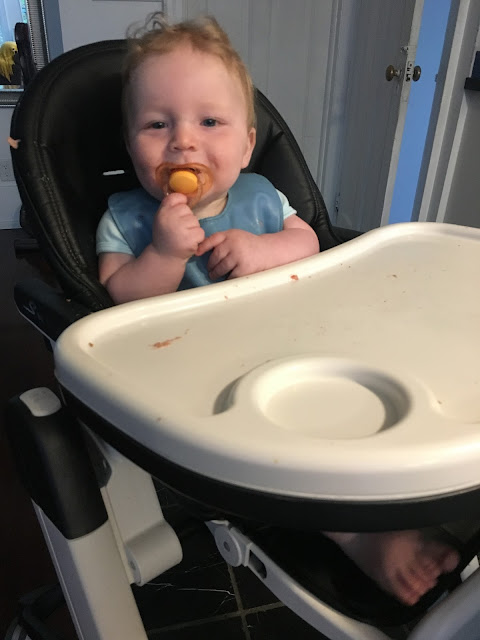 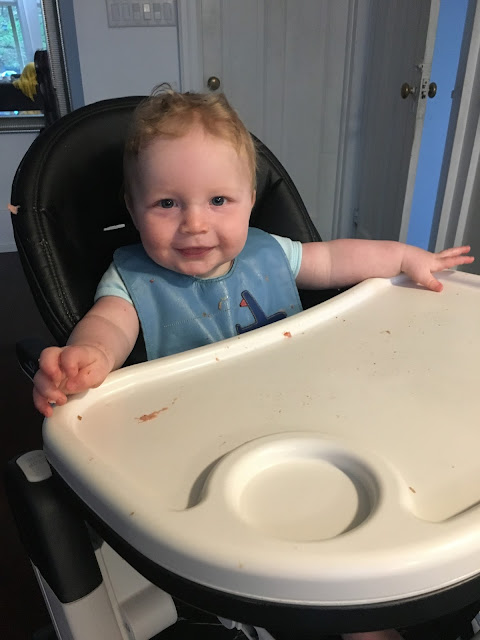 A little playtime after breakfast.  His favourite part of the dinosaur set is clearly the plastic scenery sheet. 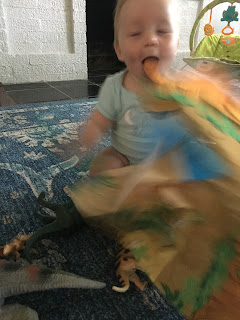 Since he was up so early, he went back to bed for his morning nap before 8:00 so I had a few minutes to drink my coffee, eat my breakfast, flip through the LCBO magazine, and watch Wimbledon and the Tour de France. 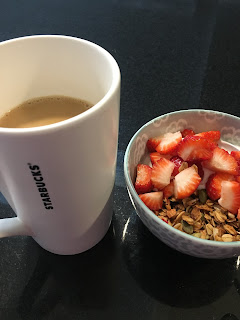 I took a picture of this page because this is one of the rosés I like and I had this Sunnyside Session IPA at Bryden's the other day and it was very tasty, I'll have to look for the cans next time. 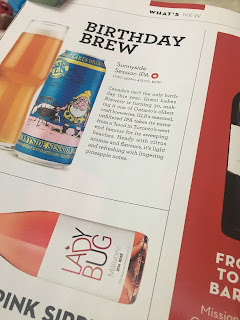 After Dave and E got up, I walked up the street to buy some ingredients to make some baby food.  Of course I bought all kinds of stuff and then remembered we were going away for two weeks.  I've made some baby food and also incorporated some into our menu. 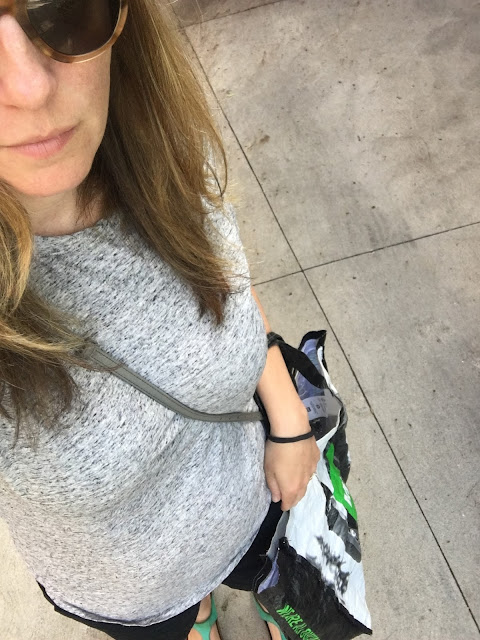 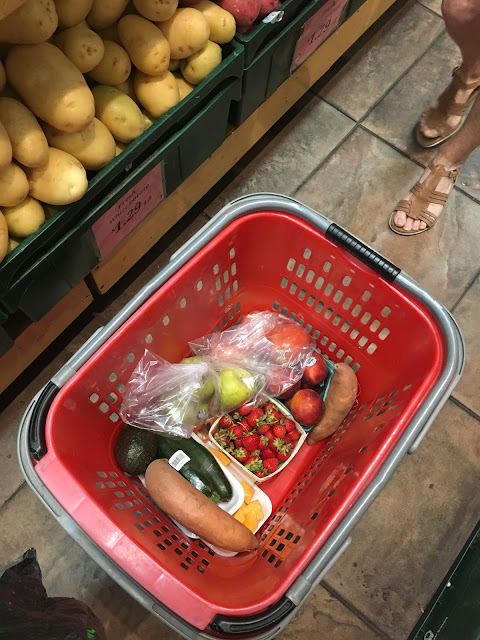 When I got back, we all headed up to the Baby Point Club to attend a Teenage Mutant Ninja Turtle birthday party for one of E's friends.  They had a bouncy castle, lawn games, a craft to make your own nunchucks, pizza, and lots of buddies.   Bonus, on the way up, we ran into other friends at the playground who were attending a birthday party across the street. 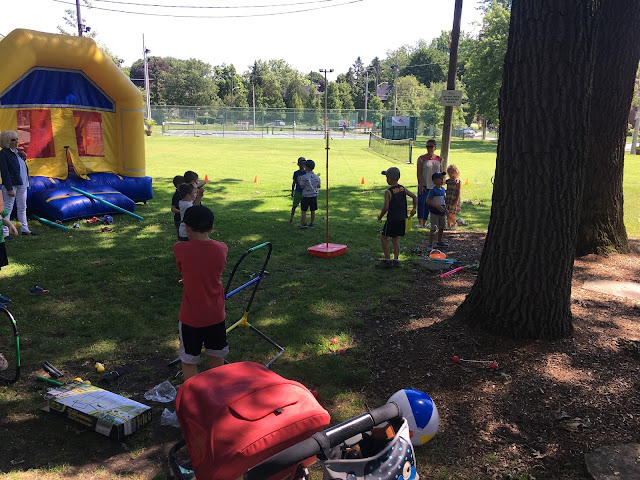 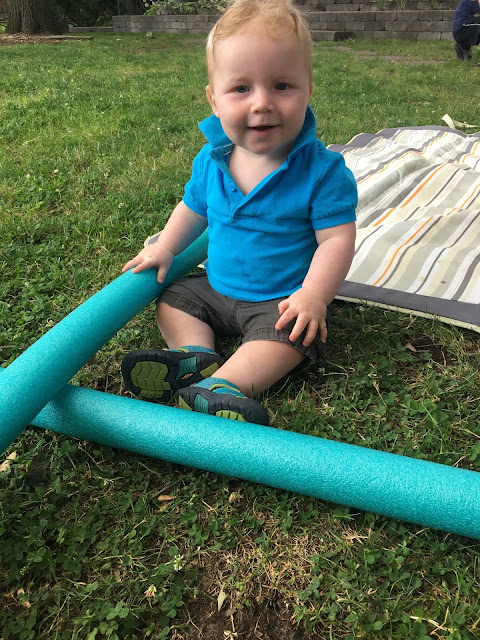 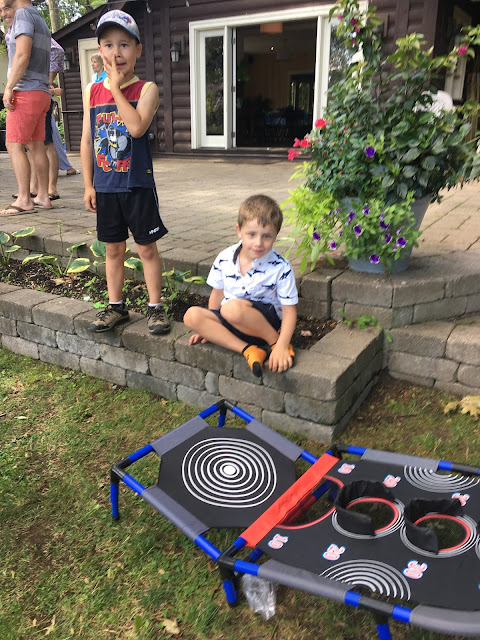 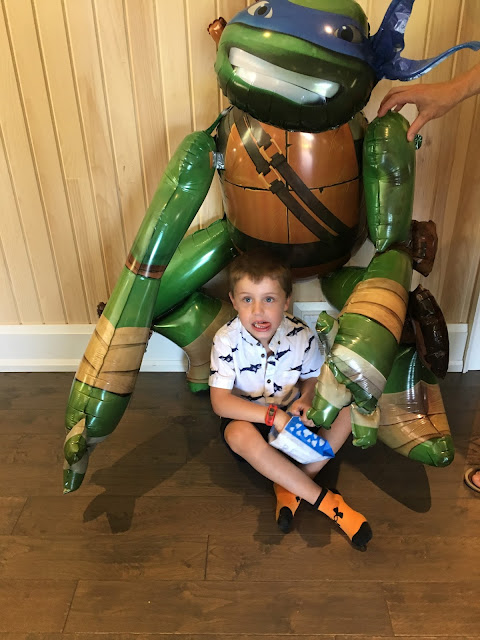 When we got home, we watched some of the Blue Jays game, and I made up some baby food. 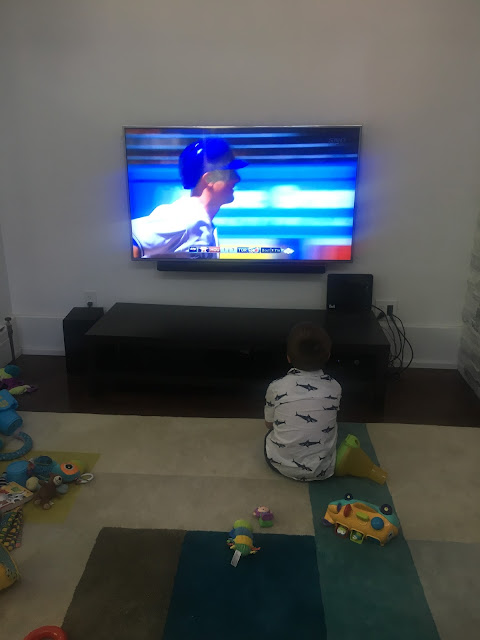 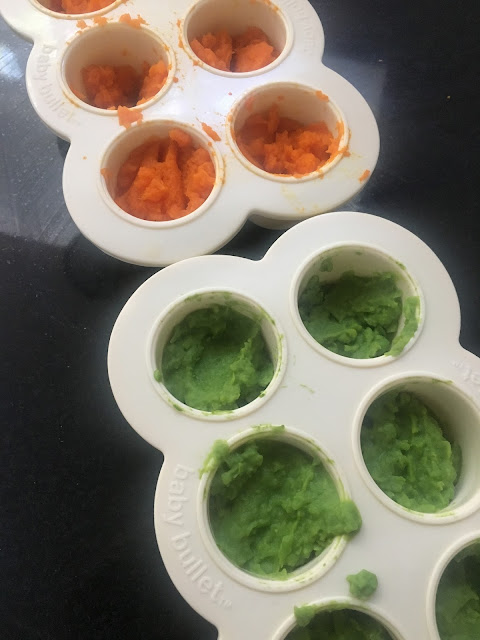 Dave had the idea to go for a swim so when Q woke up, we drove down to the Sunnyside Gus Ryder Outdoor Pool.  E worked on his swimming; I think he just needs more confidence and practice without his floaty thing and then he will be okay. 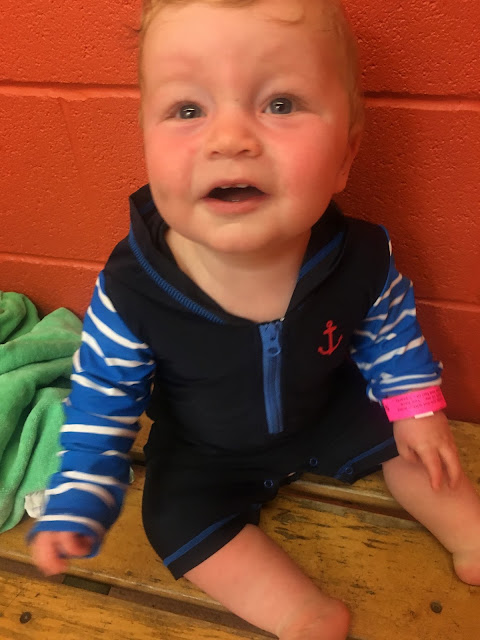 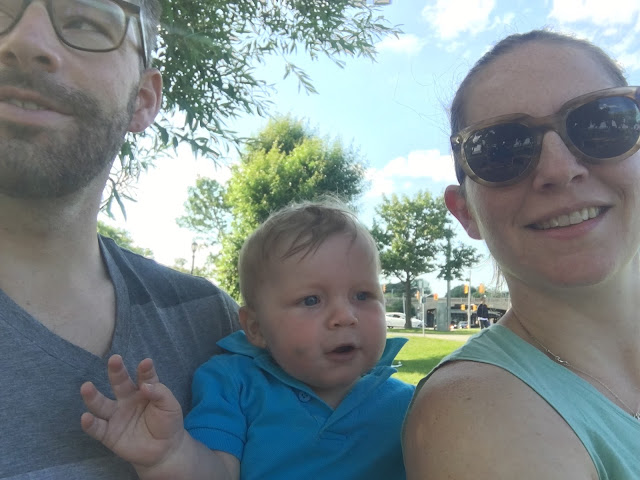 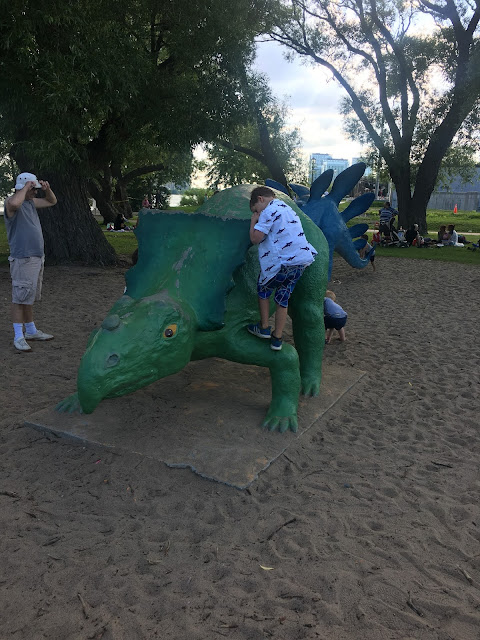 When we got home, I made a quick dinner for Q, and Dave and E had their leftovers from the night before, and then they went to play tennis.  The local tennis club has public hours on Saturday evenings so they went down to hit a few balls.  This is another sport that we'd like E to get into but he needs to mature a little bit first.  He took lessons last year that were semi-successful, but he wasn't super into it yet.  I think the Wimbledon watching has encouraged him to try it again though. 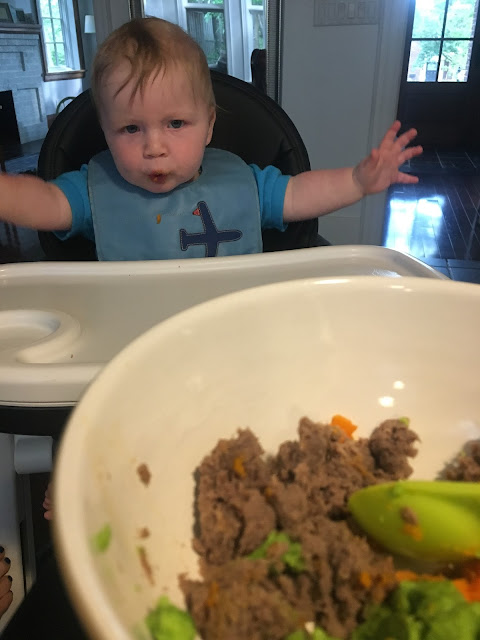 While they were gone, and after Q went to sleep, I sat outside with a drink and a book.  I'd love to spend more time out here but I'll take the small pockets of time when I can get them.  I must have been quiet because two chipmunks came to visit, one just ran under my seat, but the other one charged at skipped towards me from down the hill.  I screamed both times.  They're cute and all, but I don't want them that close to me. 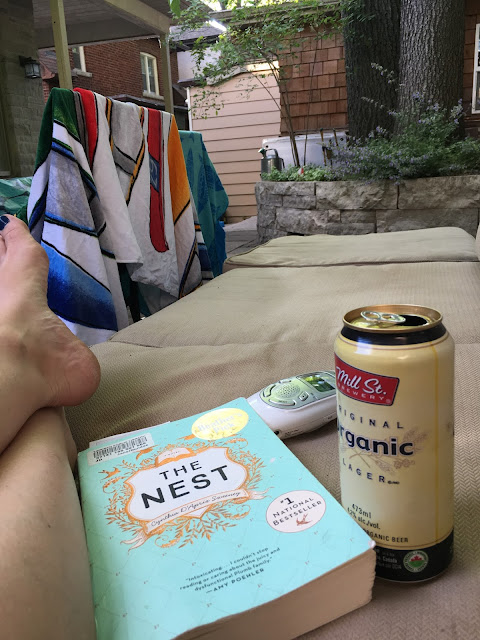 After tennis, E had some dessert and licked the plate clean (with my encouragement). 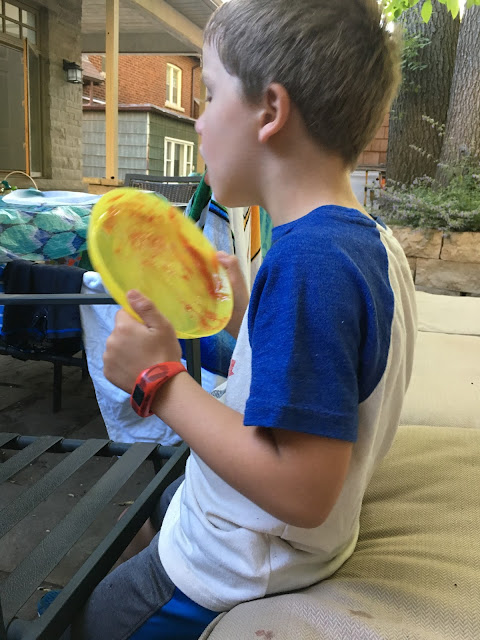 After E went to bed, we watched Snowden.  I wasn't sure if I would like it, but I don't know why I thought that, I love movies that are based on true stories, and Joseph Gordon-Levitt is such a great actor.   It's one of those stories where I knew about it, but didn't really know many of the details, so it's well worth the watch.

I can't say that this is a typical weekend day in the summer, we don't usually have a birthday party, and go swimming (and tennis!) all in the same day, but we do keep busy and we always have yummy food.

Thanks for checking in!

Labels: Day in the Life, Workin It Wednesday