E brought a friend home from school on Friday so they could go sledding.   Dave took them down to the river to sled for a bit while I was to stay back and make supper.  But then Q wasn't happy being there because his hands were cold (he only likes wearing a certain kind of mittens).  So I went down and did a couple of runs with him and then pulled him home on the sled.  I put together some tacos and we ate that and then put on The Christmas Chronicles for the kids.

The next morning I was up early to register for swimming lessons (success!) and then we started getting ready for skiing.  We thought it would be a good idea to get all of our ski stuff sorted out and get Q up on some skis before lessons started in January.  It is rare we get to ski in December so we took the opportunity.

All bundled up and ready to go. 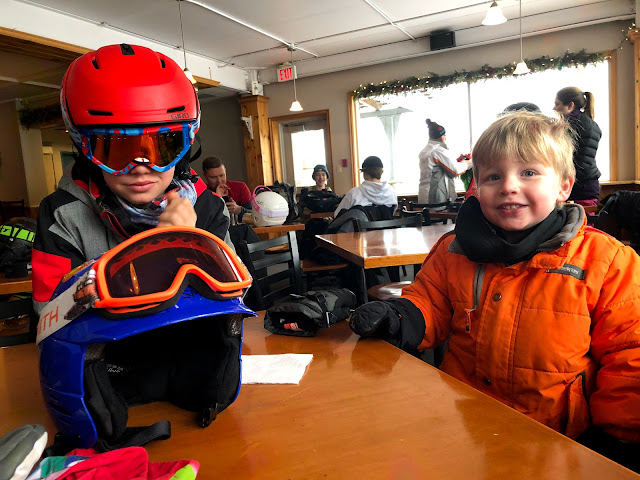 First stop was to get Q fitted for some skis. 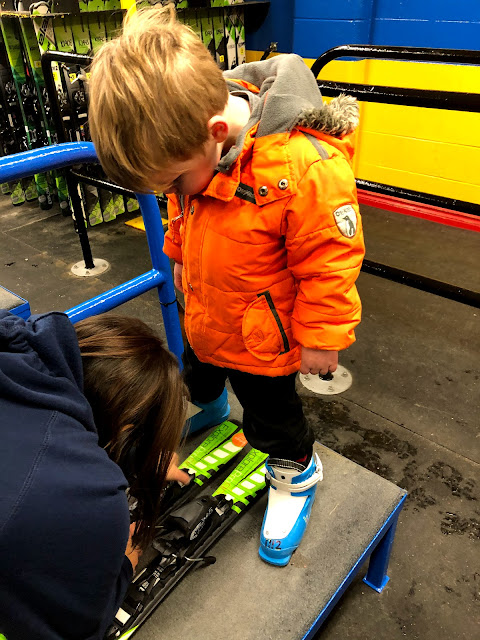 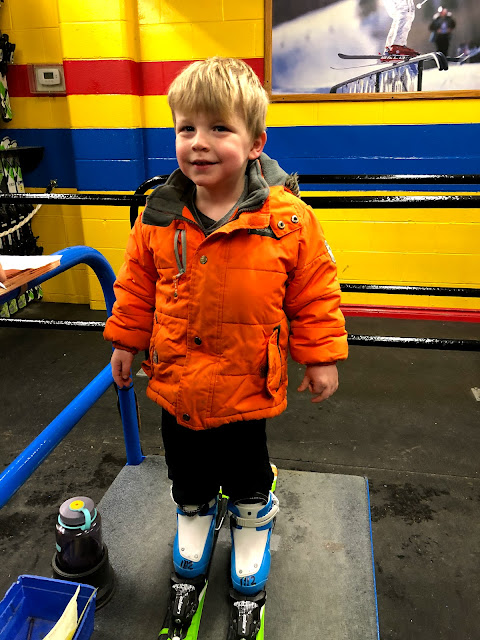 He carried his stuff for approximately 5 seconds, declared he was strong, and then struggled so I offered to take them and he was happy to give them to me.  And then I carried him and the skis up the stairs (I'm strong too!). 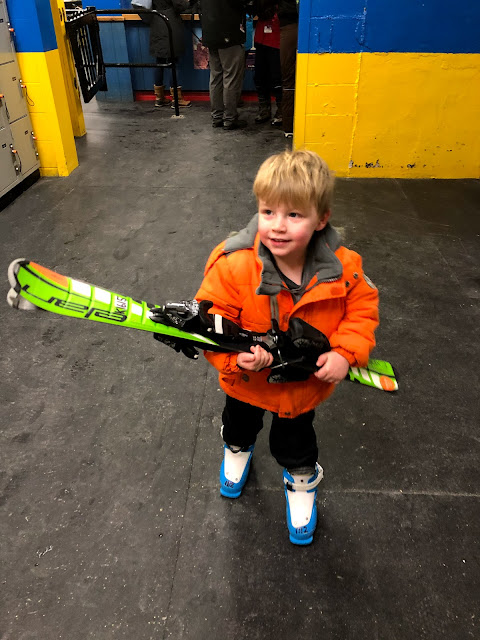 We all headed over to the beginner hill and we all coached Q down the hill.  Then I took off with E to do a big run. 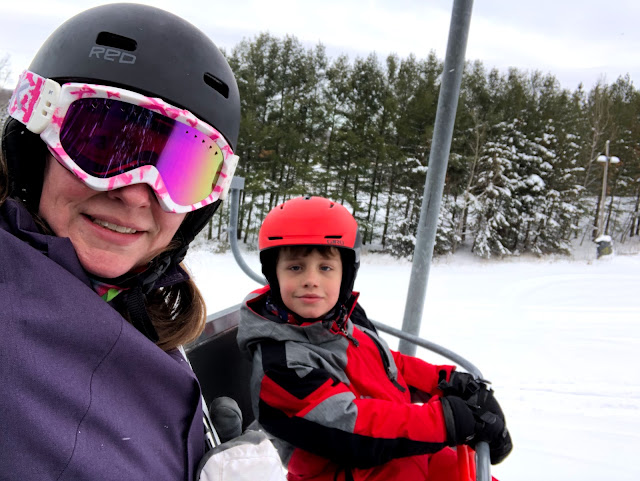 Then Q needed a snack of course. 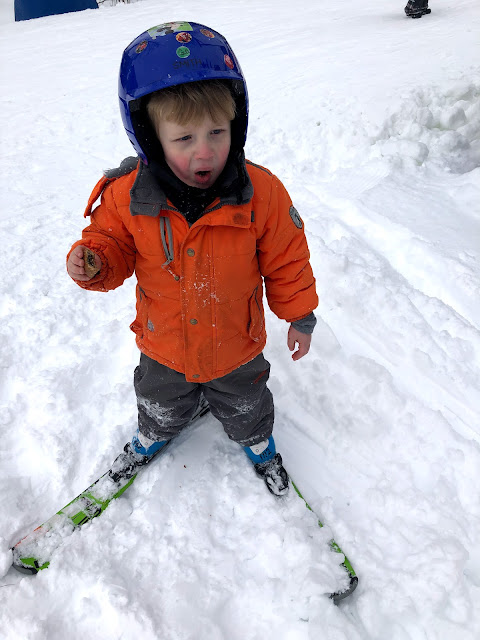 Then Dave took E skiing while I worked with Q.  He did pretty well holding onto my pole while I walked along beside him. Finally Dave and E came back (they had some delays on the lift).

Q and I are in the background to the right. 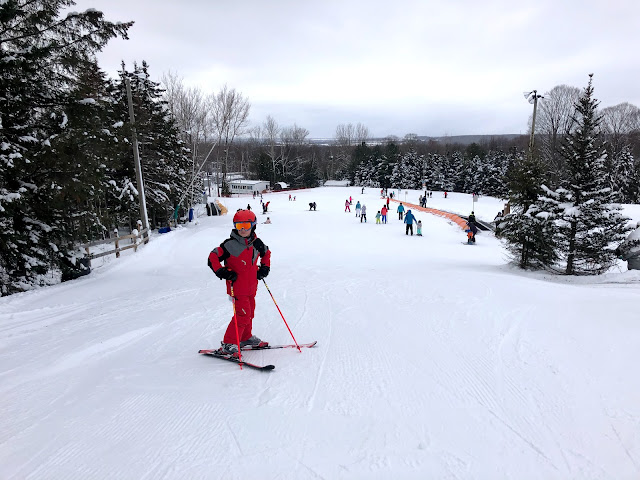 He was having fun, he just didn't want a photo.  You can't tell from this photo but I am sweating! 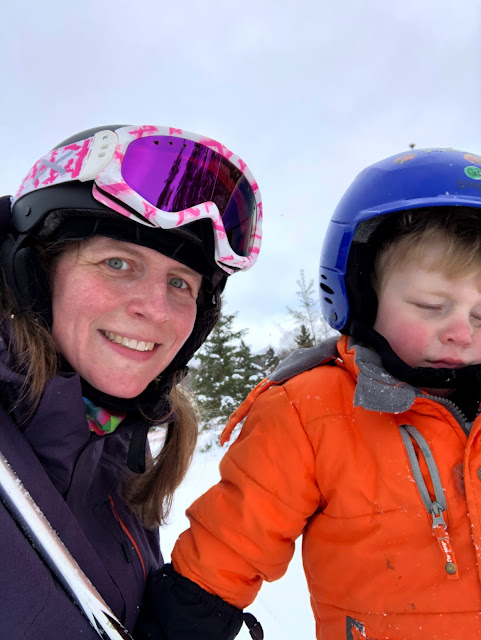 Then I took E down for a few more runs while Dave took Q inside.  We all have season passes so it was still worth the trip even though we didn't really get a full day of skiing. 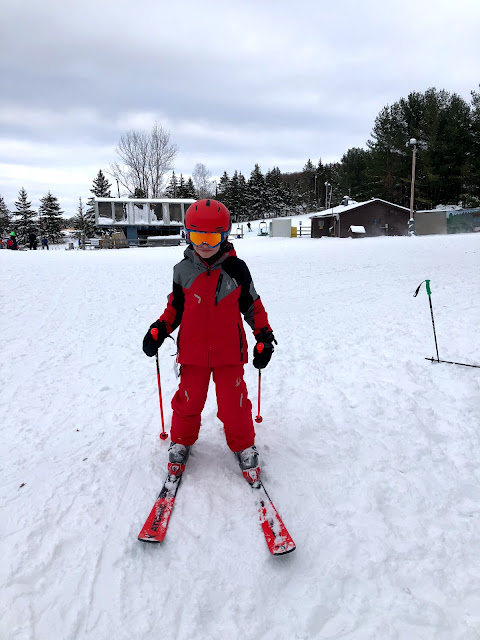 And pretty much as soon as we left the hill, this was Q.  Note Hulk and Thanos in his hands 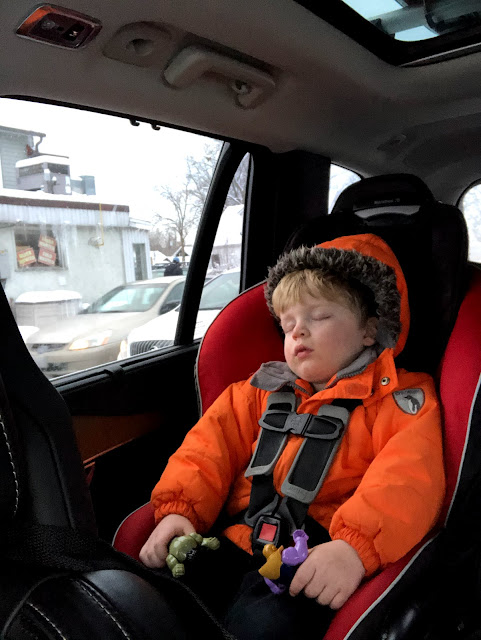 We had dinner at Montanas and it was pretty good. 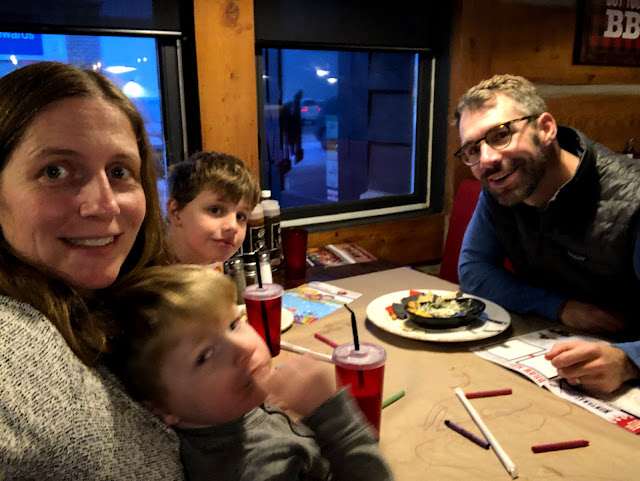 And if skiing wasn't enough, we met up with some friends in Schomberg.  They were having a Christmas parade with tractors decorated in lights, along with some other activities on Main Street. 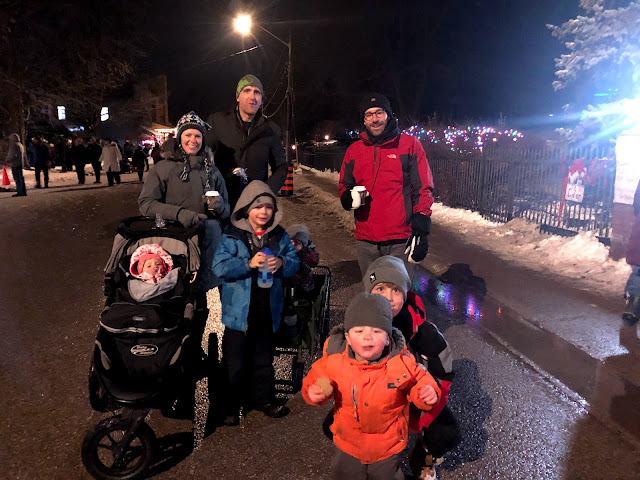 The boys tried out some curling. 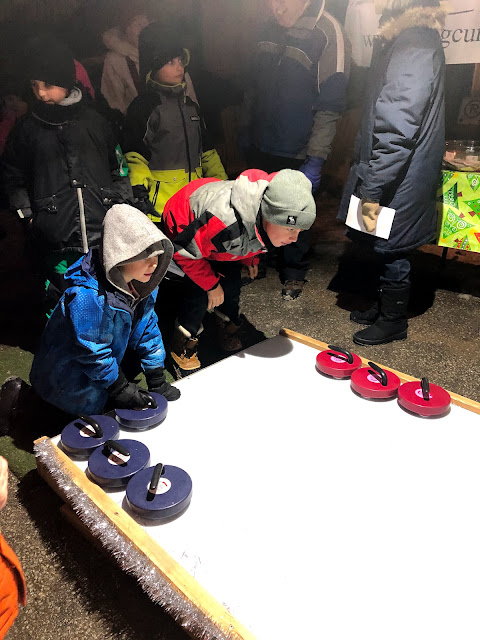 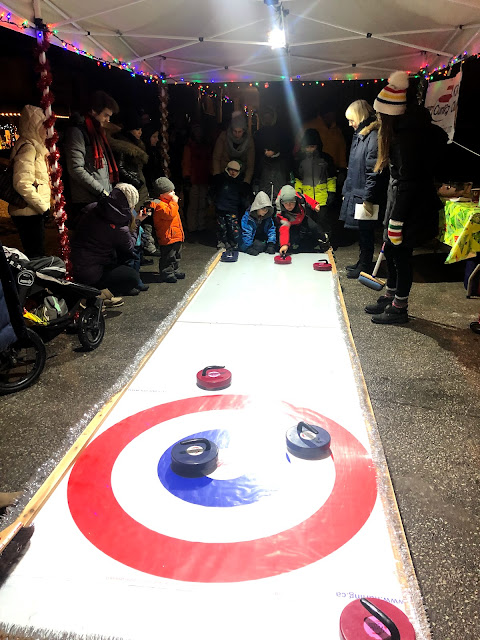 We saw some buskers, had some popcorn and hot chocolate, and tried to convince Q to wear his mittens. 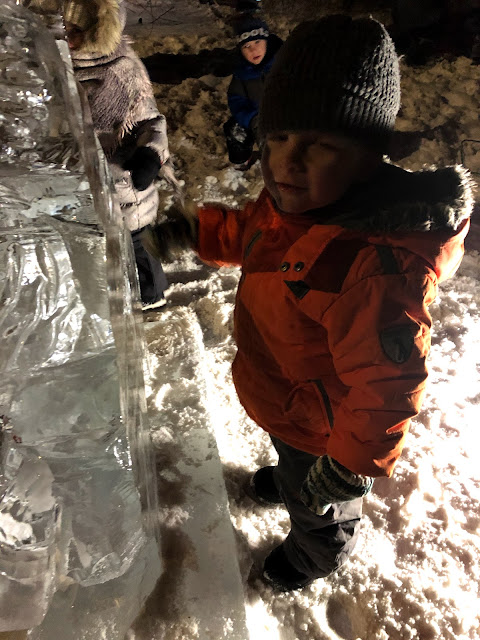 Here come the tractors.  It's a great idea for a parade. 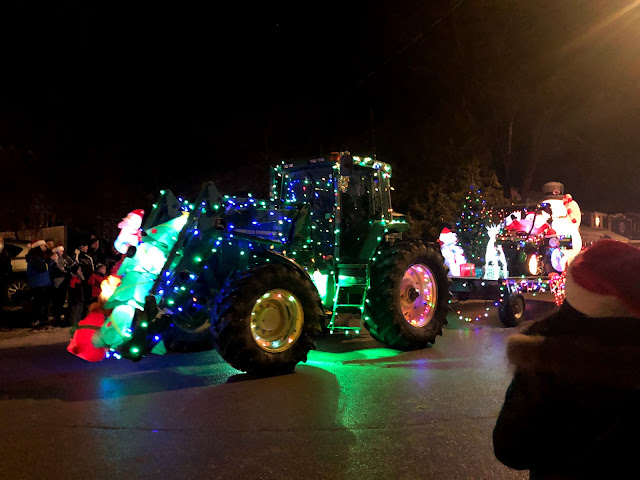 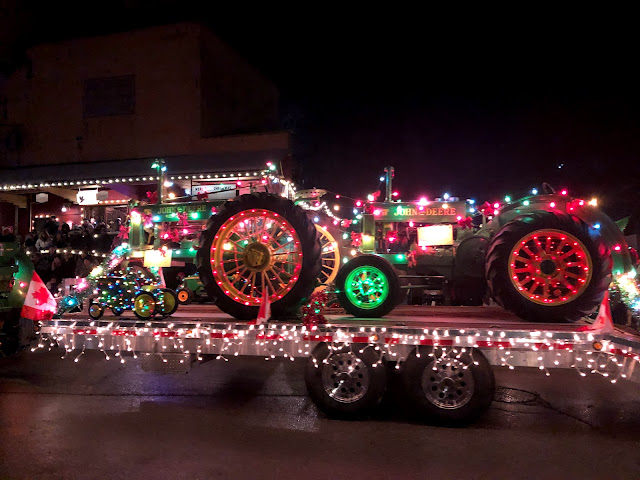 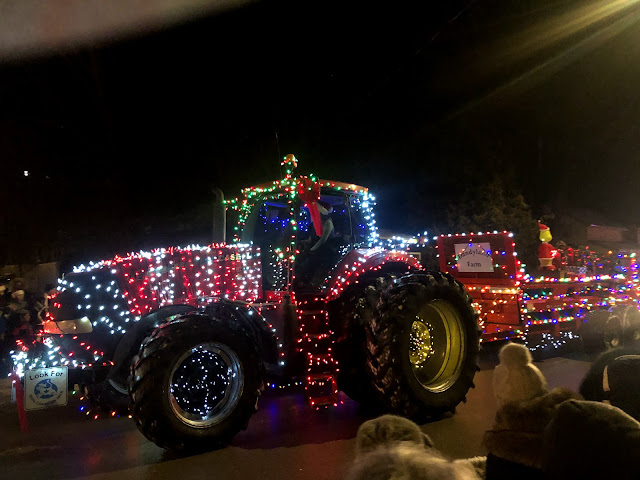 I started to take Q back to the car before the end of the parade (although we still go to see Santa), he was tired and cold (although it's his own fault for not wearing the several pairs of mittens we offered).  But I got him all cozy in his carseat and then he was fine.

Our trip home was a little crazy since the 400 was closed and we got turned around a few times.

I took no photos on Sunday as it was another busy day.  I was up early again to get some work done, then started tidying and doing laundry.  I took the boys to church, and in the afternoon started preparing for our Christmas party, happening this coming Saturday.  We put together a smorgasbord for supper and watched Home Alone.

*** Update ***
I did take a photo on Sunday.  Q joined us in the sanctuary before church and then went down to the nursery after a bit. 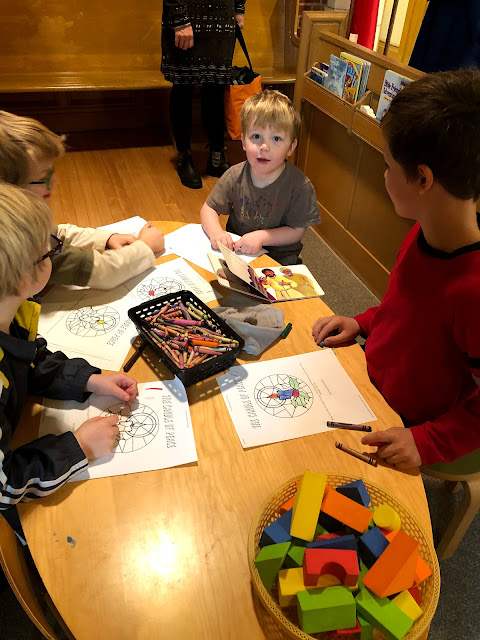