This past weekend we were invited to a cottage with some friends.  We don't have regular access to cottage country, other than our camping trips, so it was really great to experience the cottage life.  We were on Jack Lake in the Kawartha region.  The family we were with are our neighbours and they have two kids the same age as our kids so we know them well.  We left mid-afternoon on Friday and were quickly met with some traffic on the DVP and then the 401 East closed right in front of us so we scooted up to the 407 for an easy drive.  We had supper of sausages and salad and then jumped in the lake. 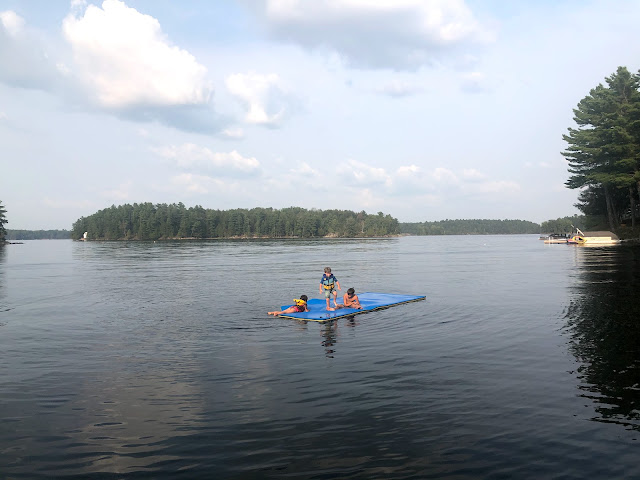 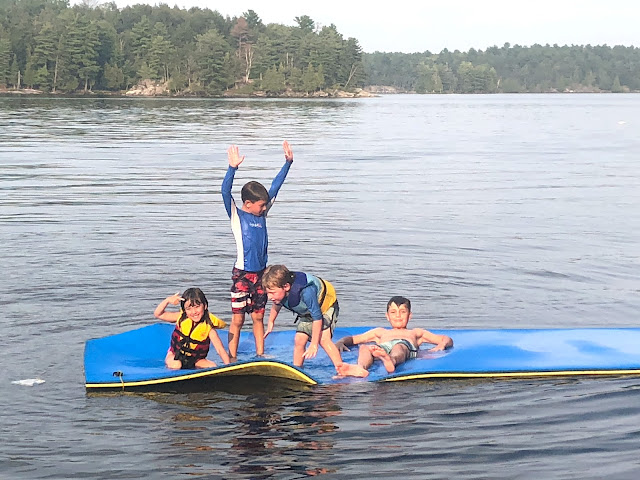 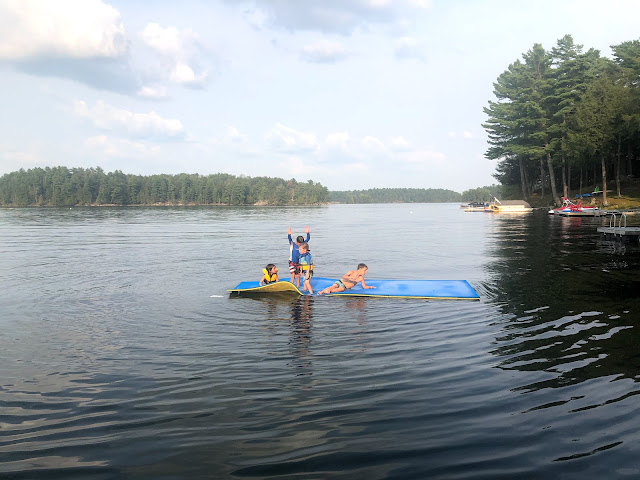 And tried out the tube and skis on the boat.  E tried the skis once on this trip out and was not successful but got up later in the trip.  Q had never been on a tube before so he thought that was pretty fun.   It was also so neat to see all of the different cottages on the lake. 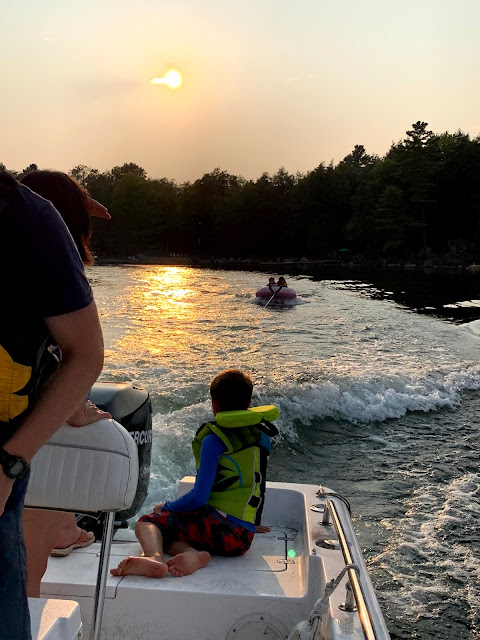 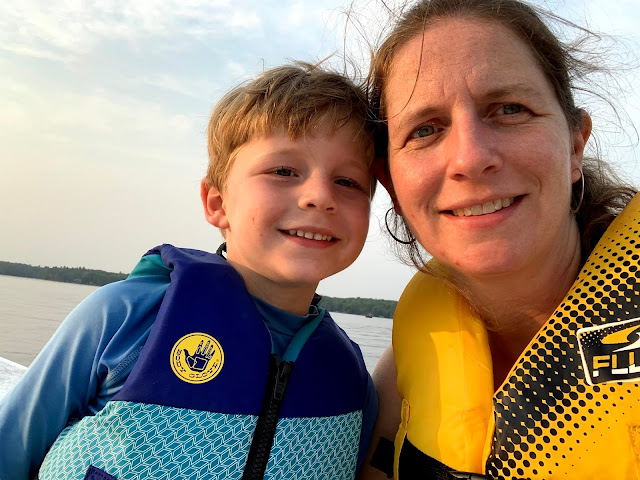 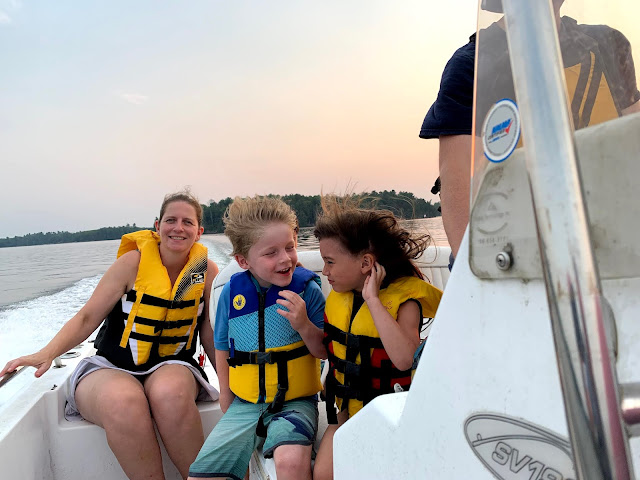 We had a fire at night but everyone was pretty tired so we did not stay up late.
We had an easy morning on Saturday with slow coffees and breakfast, and then packed up the boat for an outing to the dam.  We boated over, parked, hiked through the woods, and then jumped in by the "falls".   We had the place to ourselves which is pretty rare.  We had some lunch and then walked back to the boat. 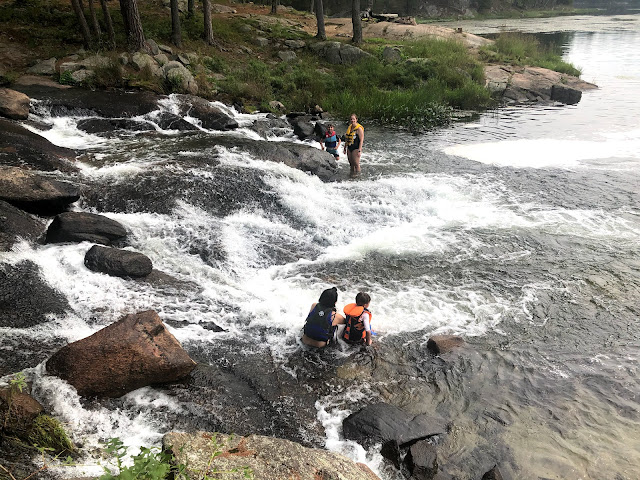 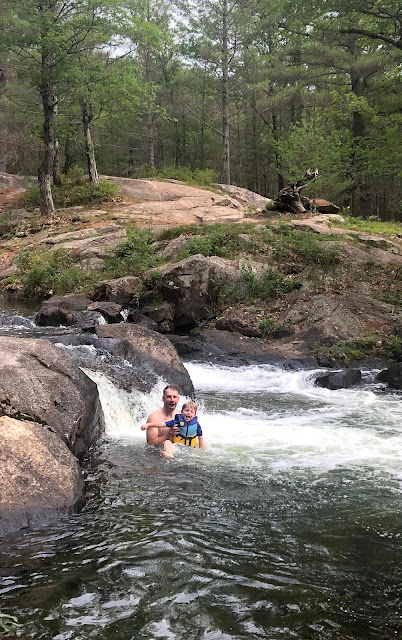 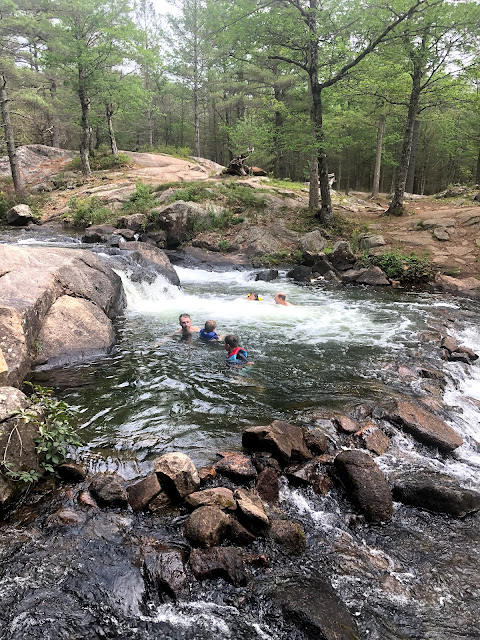 The rest of the afternoon was spent on the dock with freezies... 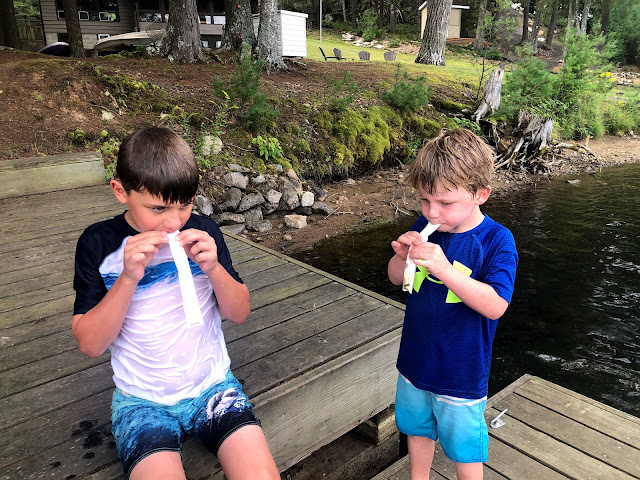 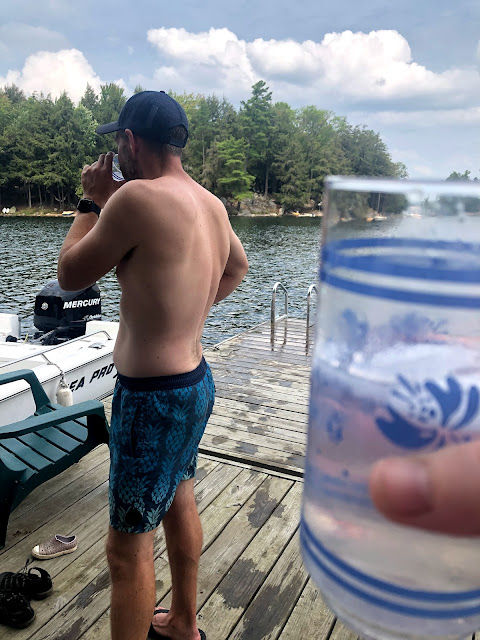 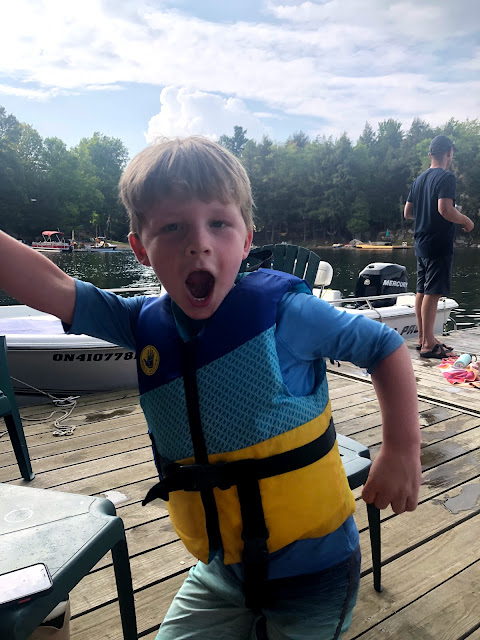 It started raining around supper time so we had to eat inside, but that was fine. We had steak, corn, caesar salad, and garlic bread.  Then we made some s'mores by the fire after the rain was done. 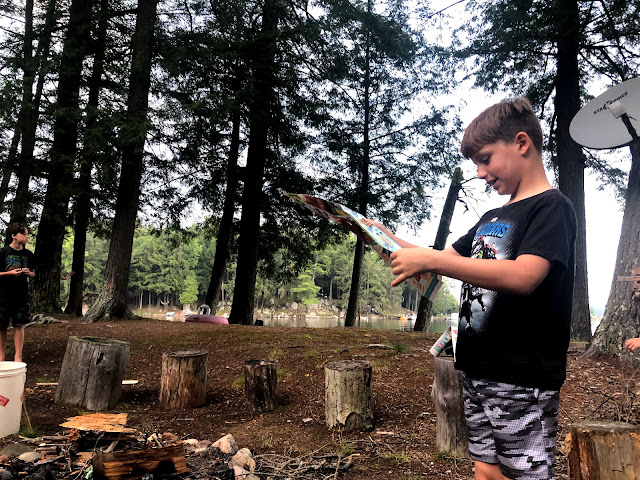 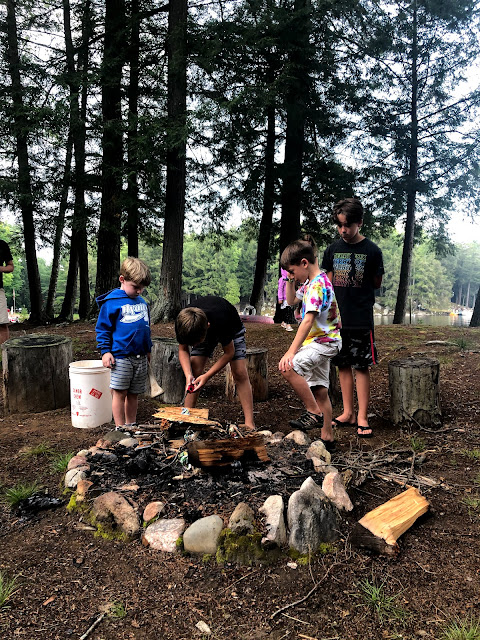 We had another beautiful day on Sunday and another slow morning. It was great to have the kids keep each other entertained so the parents could hang out.  After breakfast the kids got into the fishing gear and caught a number of small fish. 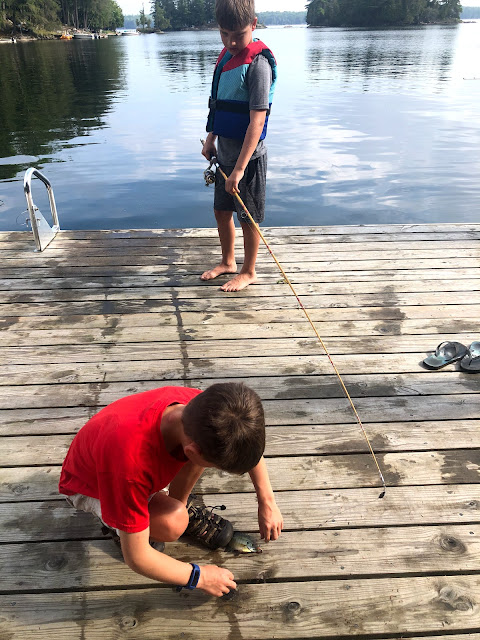 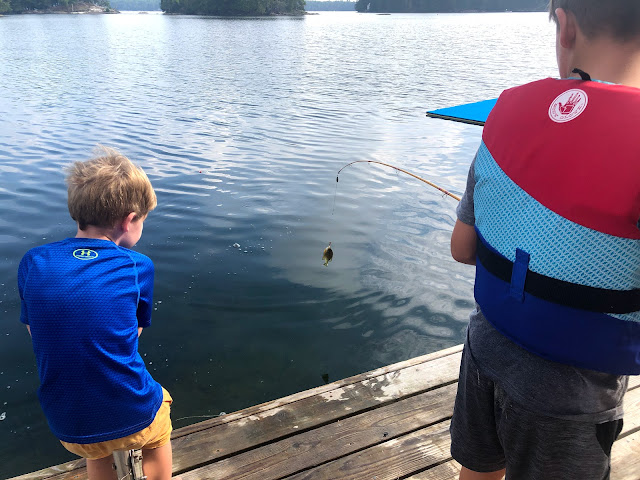 The littles caught some minnows for bait too. 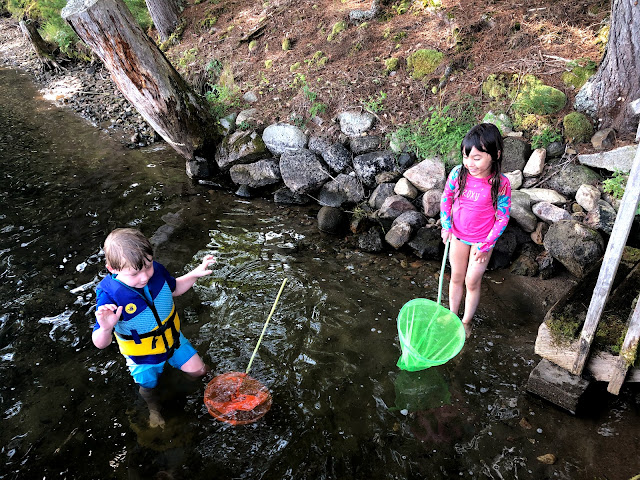 The kids did some great swimming all weekend. 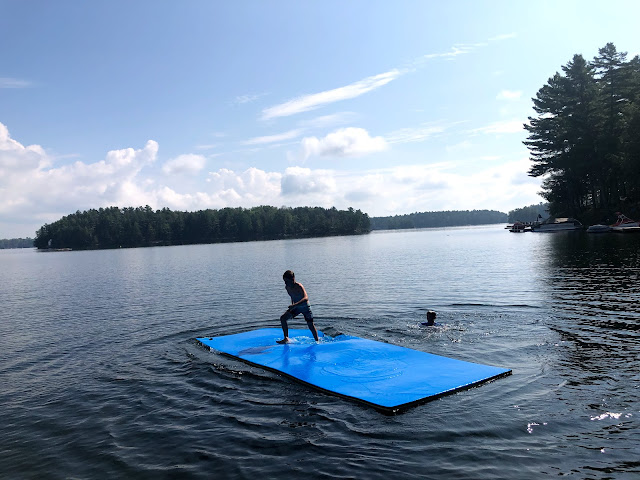 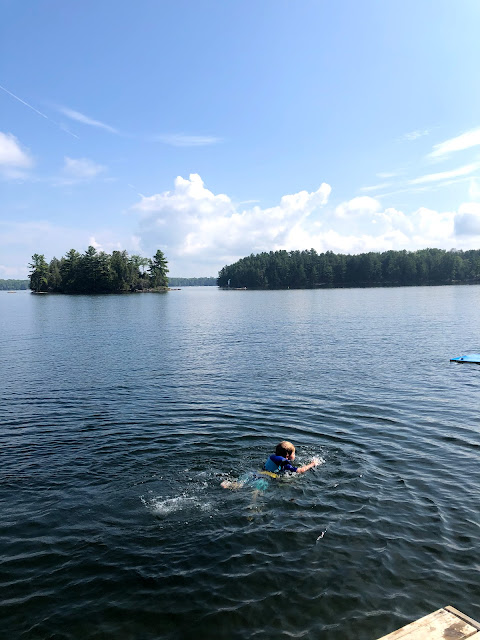 We did another round with the tube and then the skis.  Dave even got up on the skis but there is no photo evidence. 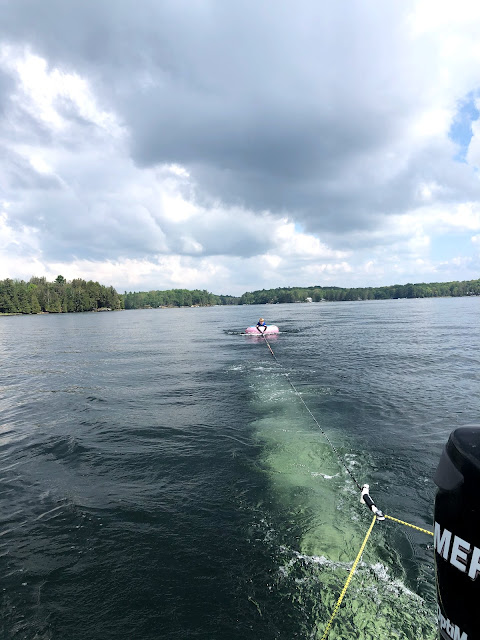 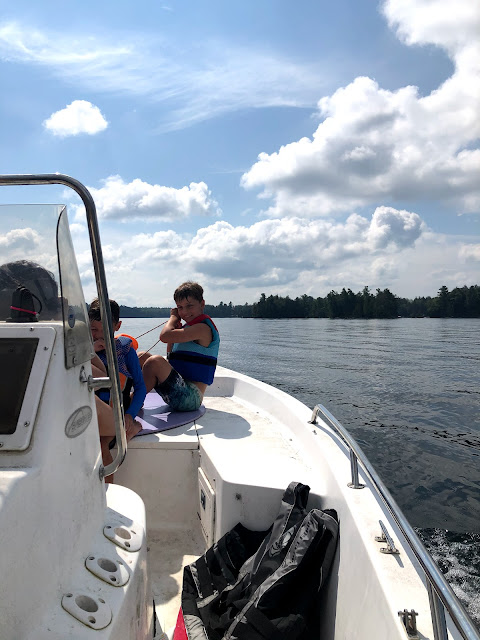 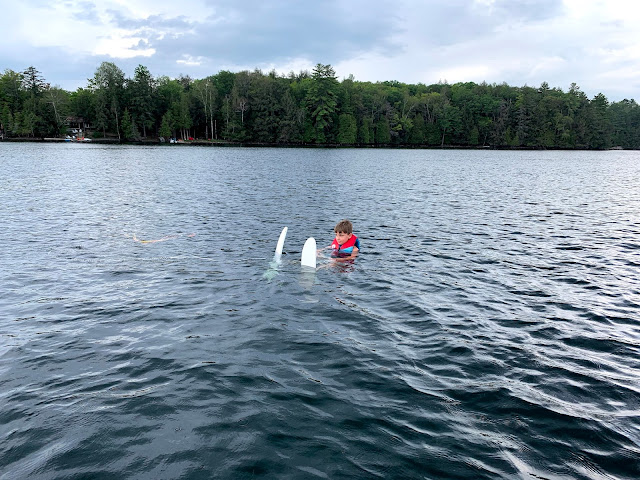 Then an early supper and ice creams on the deck before we got in the car and headed home. 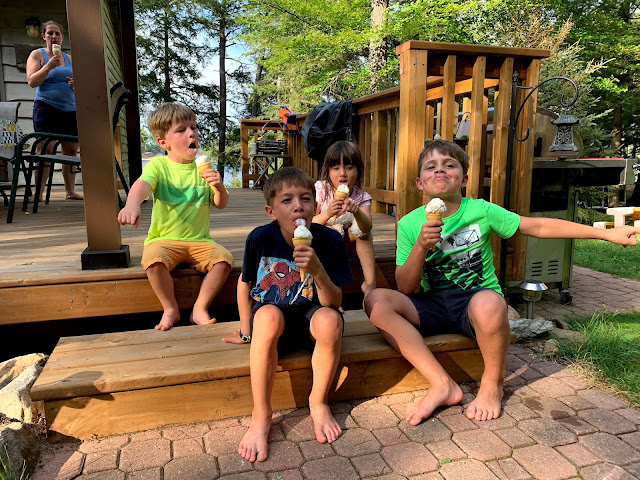 So much fun living the cottage life!
Posted by TorontoSAM at 6:00 AM