This cool kid was ready for the second day of school on Friday morning.  With Dave away and an 8:00 am meeting for me, we were out the door shortly after 7:30 to get to the YMCA. E walked to school with the neighbours and left around 8:15. 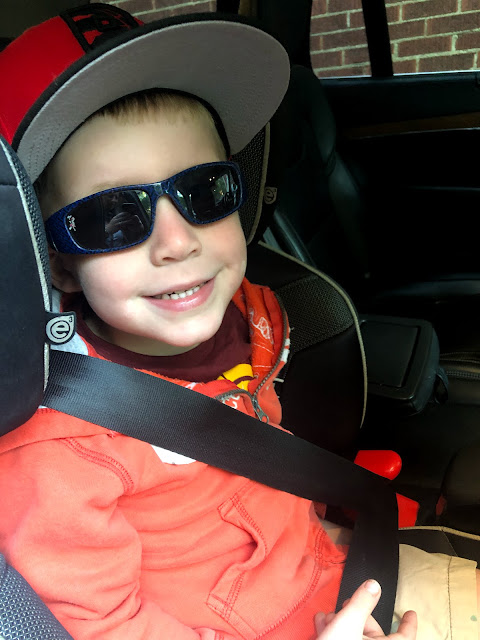 Around 11:00 I biked over the advance polling station to cast my vote.  I am usually first in line to vote but I was there mid-day so I had to wait a little while.  No problem though and glad to get it done. 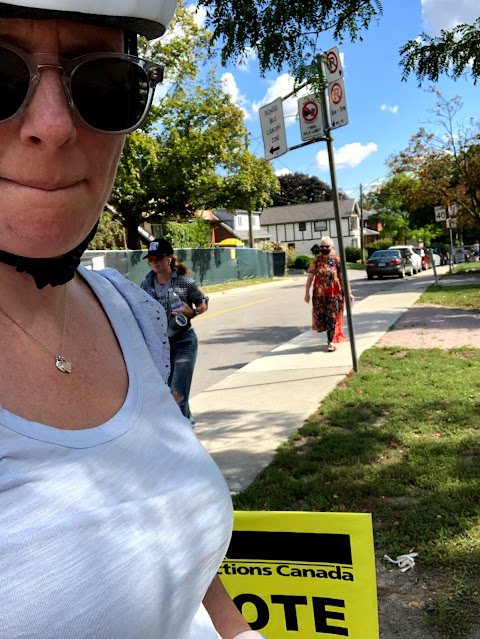 I made a lasagna for supper and realized we had lots to share so I invited some neighbour friends over to join us.  Dave was away and it turned out the dad/husband from their family was also away so it was just the moms and kids. 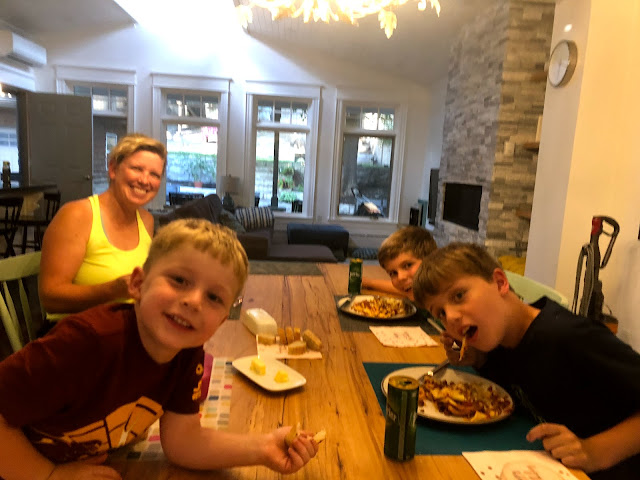 We were tired after the first few days at school so I put the kids to bed at a decent time and I read for awhile before going to bed at a good time too.
The next morning was the 20th anniversary of 9/11.  I had coffee out of my New York mug and thought a lot about that day in 2001. I also made some oatmeal and sent some emails before it was time to get to E's baseball game. 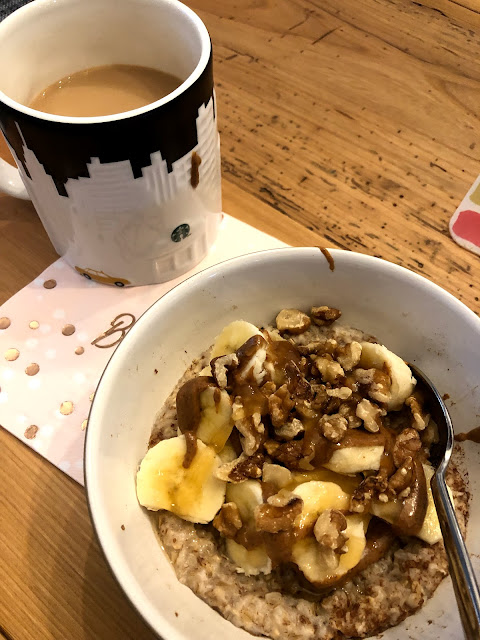 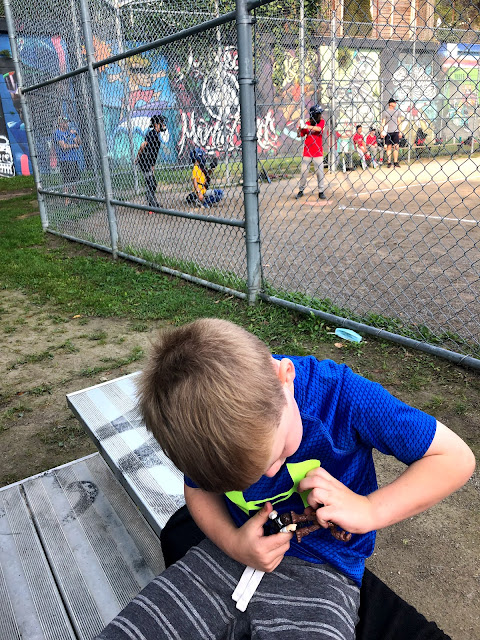 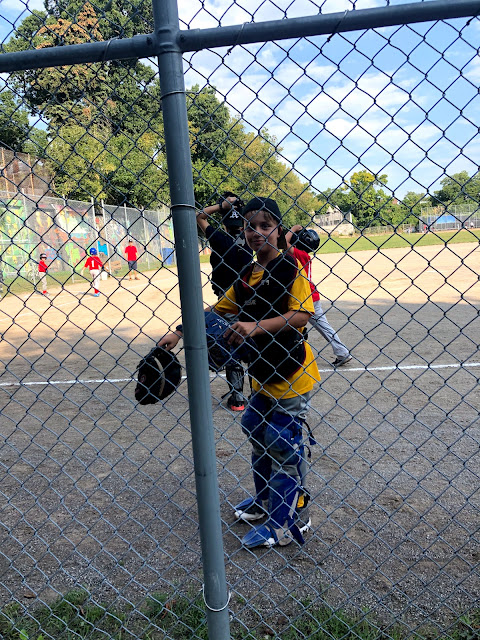 I left baseball early to take Q to his first gymnastics class.  E went home with one of his teammates after the, so then I picked him up after dropping Q off.  We scurried home, got changed, and then ran to the subway to we could get back to Q for pick up time.  Then we took the (replacement) bus (instead of the normal streetcar) down Roncesvalles to find something for lunch.  Q insisted on a burger so we went to the Gold Standard take out window. 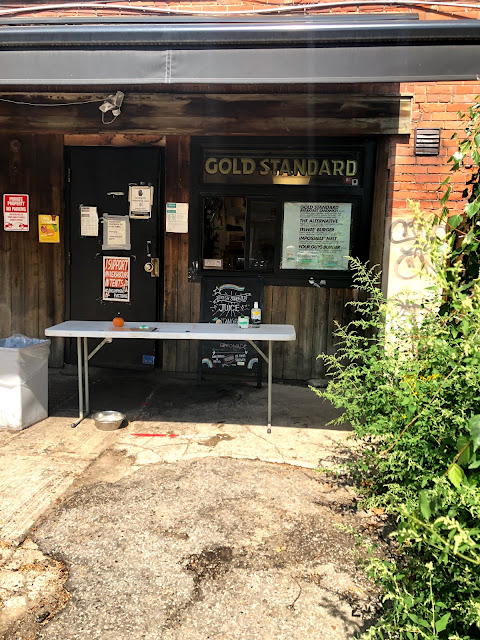 Waiting for our order. 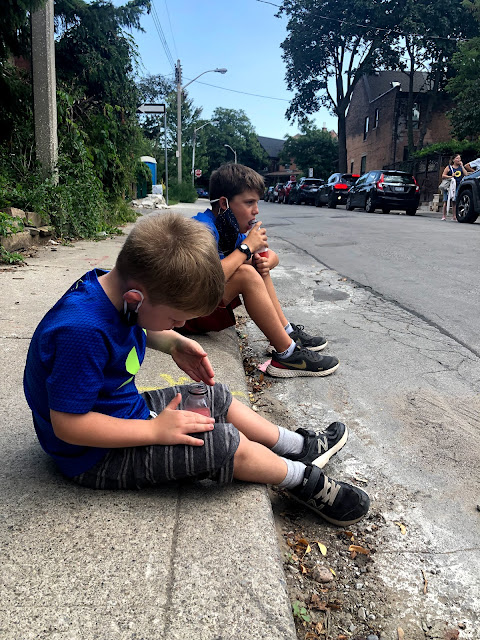 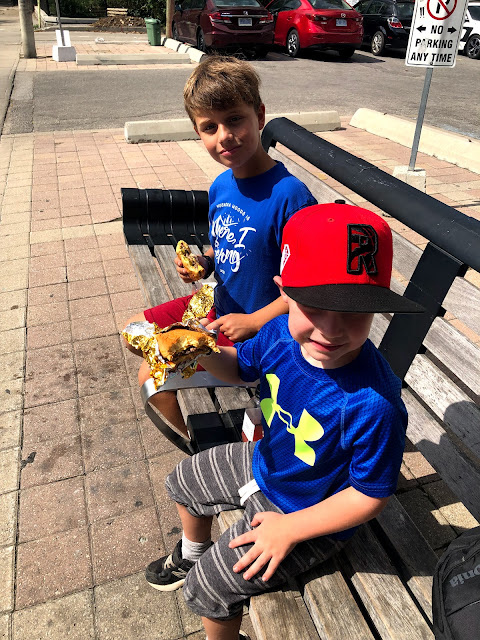 Then we walked down the street and found a flea market at a church so we picked up a few books. Then we found the ice cream store. 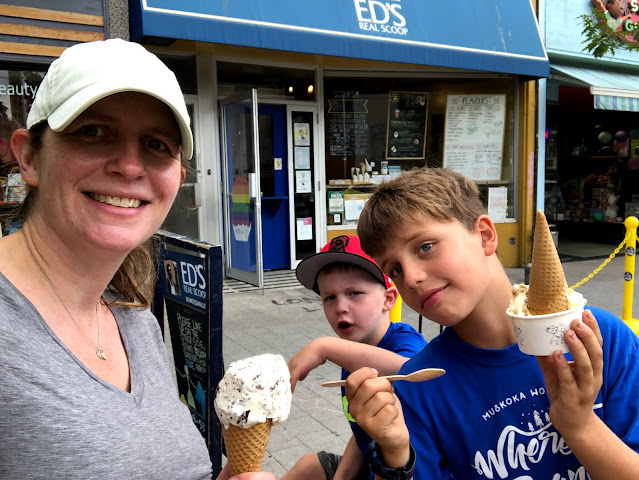 Waiting for the bus back up to the subway station.  Q is holding a bag of ice, he fell on his face outside of a restaurant and the server kindly brought him some ice for his face.  He was fine but we appreciated the gesture. 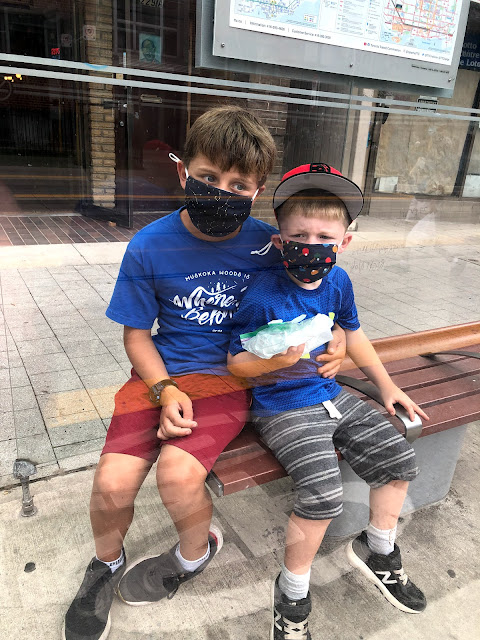 When we got home, the kids watched some TV and I put on the recorded F1 qualifying race but then fell promptly asleep!  I had just woken up when our neighbours came by to see if we wanted to go to the park, so we did.
Q wanted to go fishing and I wanted to go for a walk to the river, so I got the kids' fishing rods out and we went down to put them in the water. 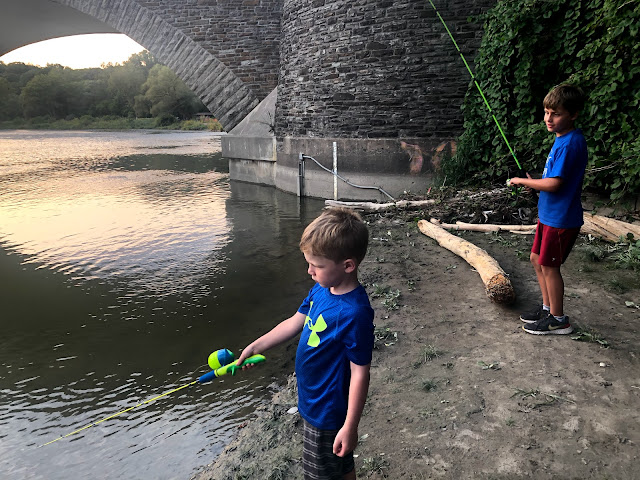 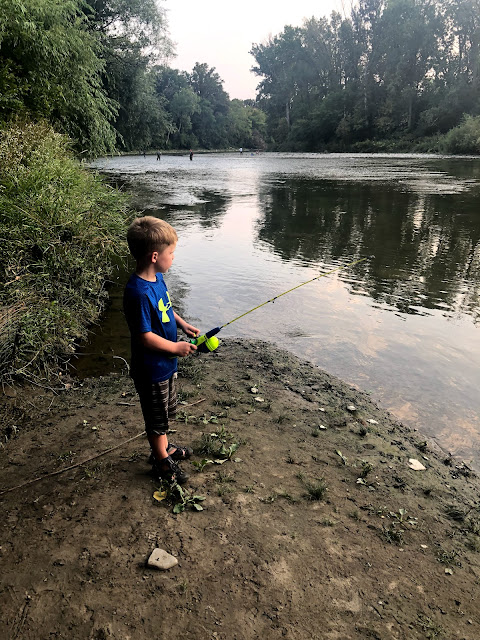 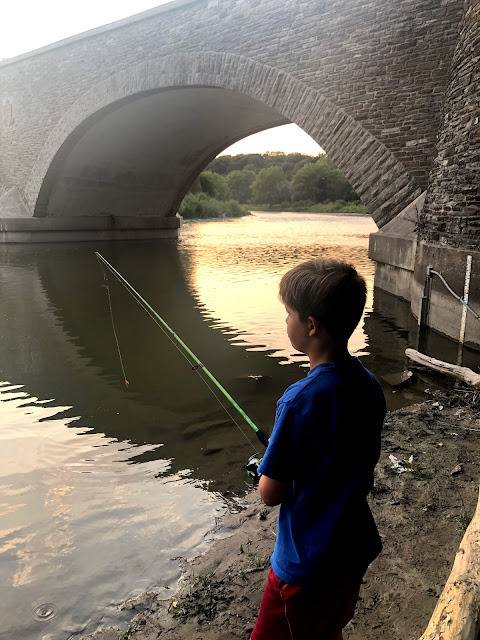 I started watching the 9/11 documentary on Netflix after the kids went to bed.  To this day I still grasp at my chest with my hands and look with disbelief when I watch the planes hit the buildings and then the buildings collapse.  I feel the same way I felt that day.
On Sunday morning we were up fairly early.  I did a 45 minute Peloton ride and then watched the F1 race on my iPhone with my airpods while the kids watched TV.  What a crazy race!  It was over by 10:30 so then I put the church service on the TV and we all watched together (amongst the couch cushion mess). 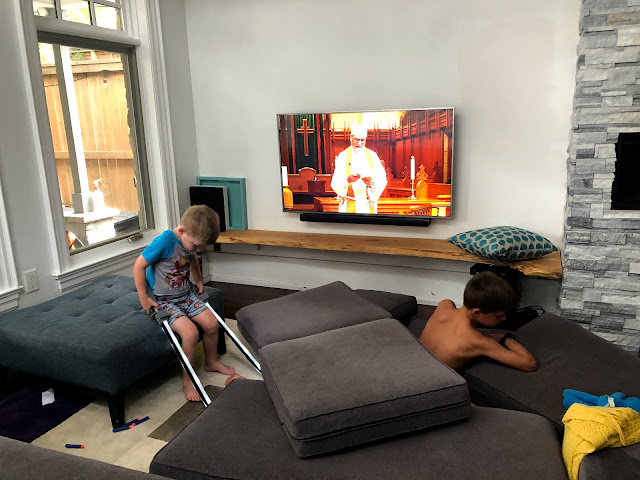 After church we went to Costco so I could get some mums for the front porch.  Then I suggested we drive downtown to get lunch at the Amsterdam Brewhouse. I love going out for lunch and I know our patio days are numbered so I take whatever opportunity I can get. 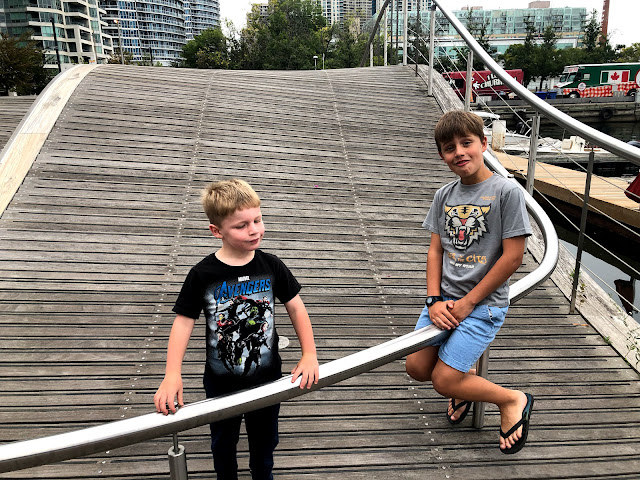 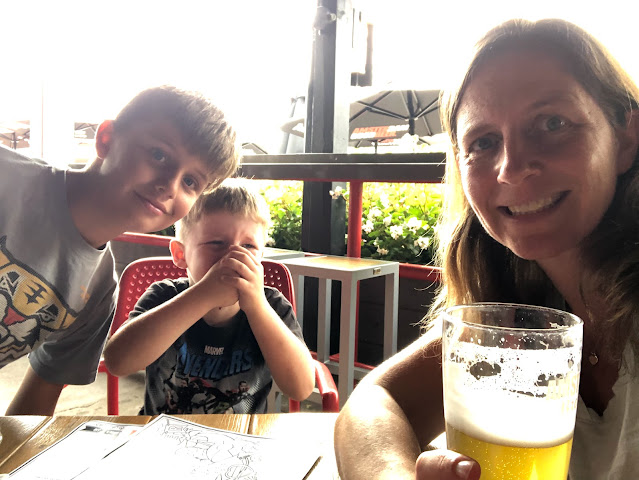 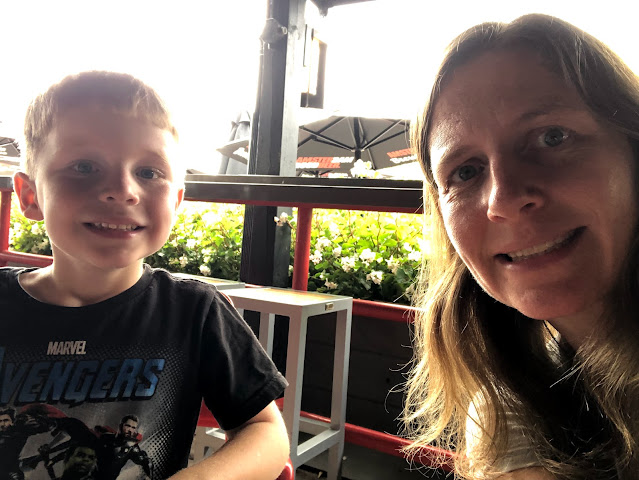 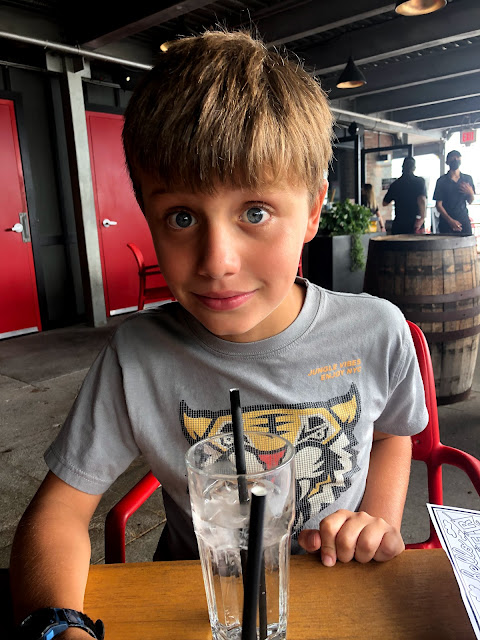 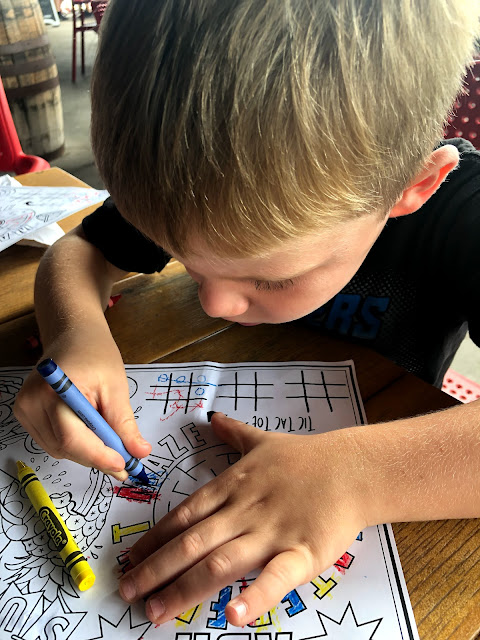 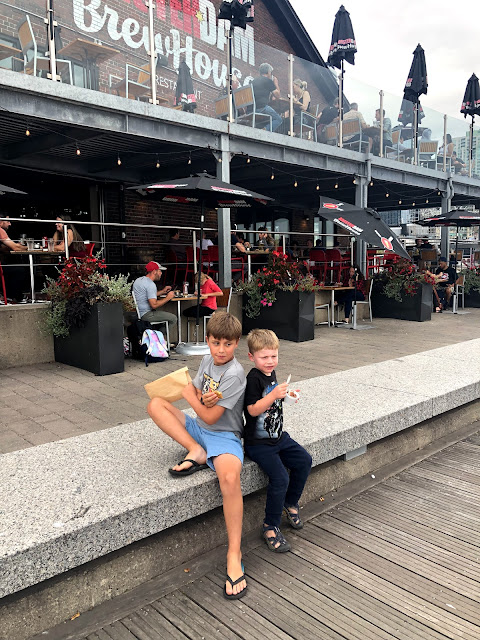 We went for a bike ride by the river before our simple supper of soup and melted cheese on toast.  E and I watched Come From Away on Apple TV.  I have seen it twice in theatre, once in New York and once in Toronto. The TV production is so good and I was reminded how great of a musical it is.  If you get a chance, watch it!
Posted by TorontoSAM at 6:00 AM