Three books this month to tell you about.
The first was Cloud Cuckoo Land by Anthony Doerr. 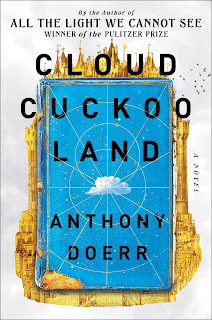 This book will probably be my favourite of the year, I loved everything about it.  This author wrote All the Light We Cannot See which was one of my favourites.  The review for this book said if "All the Light is a love letter to museums, Cloud Cuckoo Land is a love letter to libraries", and that was definitely true.  This book has many different threads that are woven together - a young boy and girl in and around Constantinople (now known as Istanbul) - short aside, if you cannot hear mention of Istanbul without singing this song then you are my person, end of aside - an older man who is directing a group of elementary students in a play at the library (and we look back over his life, as well as another person who is at the library), and a young girl in the future who is on a space expedition to a new planet.  Without spoiling much, all of the characters are reading the same story and there are excerpts from that story throughout the book.  If I was still in university studying English, I'm sure I could write an essay on the juxtapositions of the novel, but I'm not, so this is instead my superficial review.
Given the various settings, it felt like I was reading several genres at once - ancient history and sci-fi, with "regular" novel woven in, and the author succeeded in telling all of these stories.  Although there are big events that happen to each of the characters, I didn't really feel like it reached one big climax in plot, since they were all experiencing different things, rather the stories carried out independently of each other, and really, they all could have been their own fascinating story, but as I said, just linked through the ancient tale.  I do know I didn't want the stories to end, I wanted to hear more about all of them.
A beautiful quote from the book that I copied out was this: "Each of these books, child, is a door, a gateway to another place and time.  You have your whole life in front of you, and for all of it, you'll have this.  It will be enough, don't you think?".  I am fortunate that I love reading and that I do get to travel to so many different places and times, and although I do have a rich life, I won't be able to do everything so it is enough that I have reading to accompany me through life.  Highly recommend this book!
The next was Well-Read Black Girl, a collection of essays curated by Glory Edim. 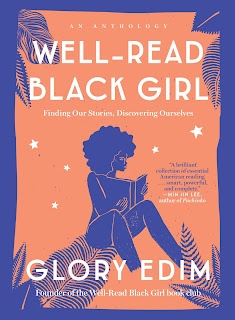 I found this book through Natasha and marked it down on my list last year when books by Black authors were particularly on my radar.  This is a great read.  I thought it was going to be excerpts from books and other written works by Black women writers, but instead it was a collection of actual essays written by them about books and writers that made an impression on them growing up and inspired their own writing.  I liked this better.  As a white person, I did not blink an eye growing up reading books about people that looked just like me and lived in the same sort of circumstances, I even loved Gone with the Wind so much that I read it multiple times, romanticizing the antebellum era, without thinking twice.  To read the essays in this book where it would only be one single book or character that spoke to these young Black girls, it struck a chord of the need for more representation in literature, film, television, and other works of art. It's not only important for the under-represented population to read about someone that looks like them, but it's important for people who do not look like the characters to see what other experiences are like.  I've said this multiple times about various books I've read, I can't know what it is like to grow up Black, Indigenous, poor, homeless, disadvantaged, abused, etc., but when I read about those that were, I can at the very least be empathetic to those people and see beyond my own little bubble of privilege.  I encourage you all to do the same.
And finally a fun summer book - Summer Love by Nancy Thayer. 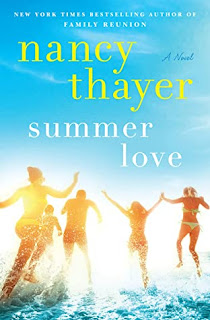 Ignoring everything I just said above, this book is just a book about rich white people in Nantucket and not an empathy building exercise at all!! That being said, it was a fun easy summer read and I'm not mad about it.  The book is split between the past when four roommates/friends are spending the summer in Nantucket, and the present where they have returned for a reunion and brought their kids with them, who are the same age as the parents were in the other part of the book.  I've never been to Nantucket but I can appreciate that it would be somewhat like Nova Scotia or Maine in the summer in terms of tourists.  I thought the author did a good job of rounding out all of the characters.  It made me yearn the beach and a lobster roll ;)  Recommend if you want something easy.
Posted by TorontoSAM at 6:00 AM