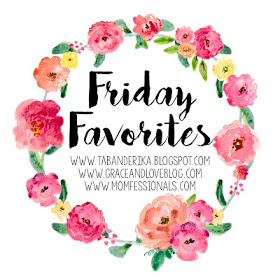 I will be doing a full post about our Jamaica trip next week so stay tuned, but I wanted to mention some favourite things about the resort where we stayed.  This is not a sponsored post, we chose this resort on our own and all opinions are my own.  However, if the Royalton people wanted to comp our next trip, I would be totally fine with that!!! ;)

We stayed at the Royalton Blue Waters.  This resort opened in November of 2016 so it is brand new, which was of course a favourite thing.  Everything is so clean and bright, the buildings and accommodations are modern and tidy.   I have gone to four resorts before.  One in Cuba and one in the Dominican Republic.  I was in university when I went to those and they were less than stellar.  The buildings were old and the food was not great, but they were fine for what we wanted at the time.  We knew when we booked this trip that we wanted a modern resort and Royalton fit the bill.  The other two trips we took were reward trips for Dave through his job and they were at the Four Seasons, one in Nevis and one in Punta Mita, Mexico.  Needless to say the Four Seasons is in a class by itself and although the Royalton is very luxurious, nothing could compare to those other two trips. 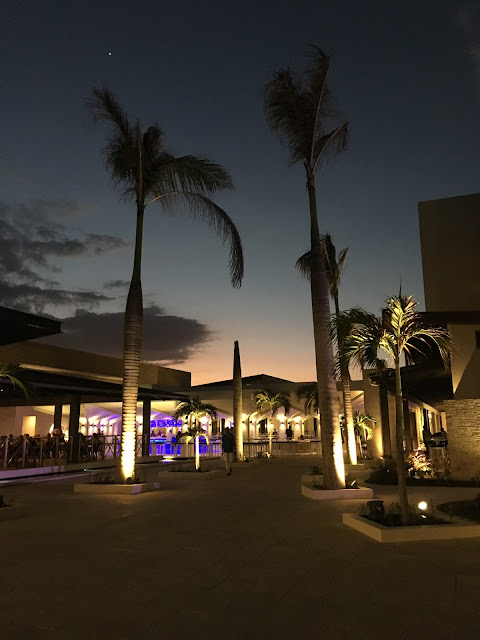 The Blue Waters is located right beside the older White Sands.  The two resorts share restaurants and the water park.  We didn't feel the need to go over to the White Sands' pools and beach although we could have if we wanted to.  The size of the resort was ideal.  I much preferred it to the large resorts I've been to before where it is a hike back to your room.  Not that we needed to often, but it was easy to pop back to our room to use the bathroom (although there are plenty of restrooms near the pool and beach) or grab something we needed. The pool was basically on the beach which was also great so you had the view even if you were poolside.

The beach is pristine and the water had virtually no seaweed.  We only spent two days of our trip on the beach however because it was quite windy and it was not ideal for E and Q.  E (and Dave) like the pool to swim, and I felt better letting E swim by himself in the pool than I would have in the waves of the ocean, and Q preferred a less windy place for napping.  If I didn't have kids with me, I would have been quite content sitting on the beach reading and napping myself. 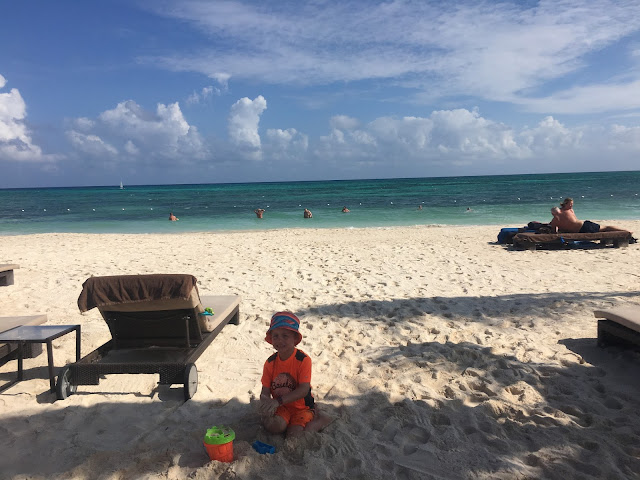 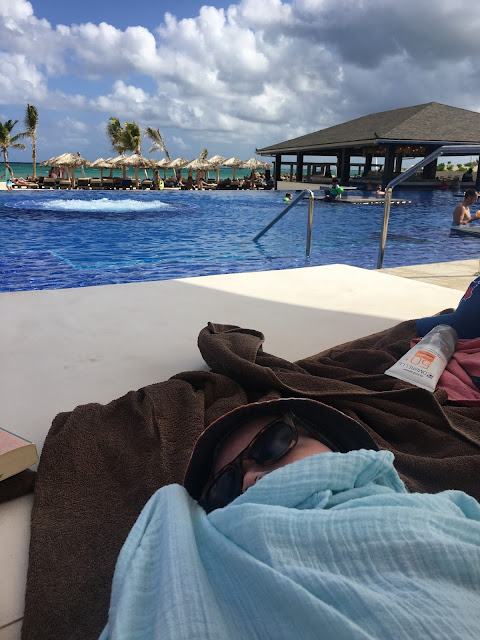 We booked a room with a swim out and it was worth the extra money.   E could play in the water while we got ready in the morning and when we got back to our room in the afternoon.   I also enjoyed an early morning dip after my run.  It was nice to be on the ground floor so we didn't have to take the elevator at all.  Our room had a king bed and a pull out couch for E; Q had a crib.  We had thought we wanted two queen beds, but the king bed was really nice especially when all four of us ended up there to watch some movies in the morning or before supper.  Some Tripadvisor reviews commented that the swim up pool was cold and that the nightly entertainment was too loud.  The pool temperature was cool, but refreshing, and we didn't mind it (however we heard that they may add some heaters).  As for the entertainment, I actually enjoyed being able to hear and sort of see the show from our room.  E and Q were too tired to stay up for the show but this way we could experience some of it after they went to bed.  Once the sliding glass door was shut, it was not too loud for us and everyone slept well.

This is the swim up part of our room.  (Pay no attention to Mr. "I'm not going to smile when Mom says smile") 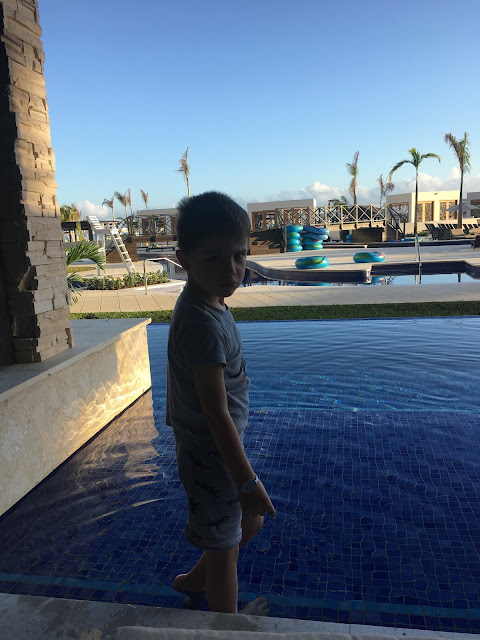 The staff was very good and there are always people to help you out with something.  There is a ton of security so we felt very safe. As I mentioned above, the resort was very clean which is partly due to its newness, but also to the people who are always cleaning, gardening, and keeping things in order.  Service at the restaurants was also great.

Okay, let me talk about the food.  We are sort of food snobs; we like to cook different meals and do so with relative success. We prefer to eat at fun hipster-y restaurants rather than chains. E eats all of the food we eat.  The food at the resort was fine but it was not the best food I've ever had.  Am I expecting best food ever at a resort?  No, but I did hear people raving about the food, and I am not one of those people.  That being said, all of the food we had and were offered was good and no one got sick.  The buffet was probably my favourite actually.  We ate breakfast there everyday and lunch there twice.  Breakfast buffets are one of my favourite things in life, and this was quite good.  I typically had the scrambled eggs or omelette, bacon, hash browns, french toast, smoked salmon and cream cheese on a bagel, fresh fruit, mimosas, delicious coffee, and some Jamaican foods like fried plantains and fish fritters.  The lunch buffet had lots of yummy food too, I especially liked the fried fish and pizza.  I am also a new convert to jerk chicken and Jamaican patties.  The resort had a jerk hut on the beach where I ate lunch three times.  On the other days we ate lunch at the beachside restaurant for burgers and chicken fingers.  The nice thing about this resort is that you don't need to make reservations for dinner  so we were able to walk in every night to the a la carte restaurants; it certainly helped that we ate early and arrived shortly after the restaurants opened.  We tried them all, except for the sports bar and the Mediterranean one.  Portions were small, which I thought was fine, but I could see how some people would complain.  They had options for kids at every restaurant but we encouraged E to order off the regular menu and try new things, and he did.

Other random comments:
- the poolside entertainment was good but not overwhelming.  I would have liked some more organized games and activities.
- most of the other guests were from Canada as Sunwing is closely aligned with the Royalton brand.
- there is a Diamond Club and personal butler service you can book, but I don't see much of a benefit to having that.  I mean, we didn't have the butler, so I can't really say, but the Diamond Club area of the beach was no different aside from more beds rather than chairs, and they had an extra bar and buffet on the beach.  I know someone said they were happy to have the butler service to bring them dinner to their room since they couldn't go out with their kids at night, but that wasn't an issue for us, so I don't know what we would have used the butler for.
- we didn't use the kids club at all, but it looked like it would be fun.
- you have to tip constantly for drinks and other services, but I didn't mind it.  The staff really do such a good job that I was happy to leave a few US Dollars for our servers, bartenders, and housekeeper.  I saw someone tip the omelette lady which I didn't think about, but I suppose would have been nice to do.
- the trip from the airport was only about 30 minutes by bus and we were the first people dropped off and the last ones picked up.  This was very nice especially with two children.
- there was reliable wi-fi throughout the resort.
- there was one day when the power was off for most of the day, this is apparently an island problem. We were mostly unaffected by it, it just meant we couldn't have any blender drinks at the bar, and then couldn't watch TV when we got back to our room before supper, but the power was back before it got dark so it was fine.
- we were greeted with a cold towel and cocktail when we got off the bus.  They also do a sit down check in, so you just find a seat in the lobby and they come to you with the forms.
- the bracelets are also keys to your room so you never have to worry about bringing the key with you.  E's bracelet opened the door too so he was happy to run ahead and get in on his own.
- the splash pad and waterslides were nice to have and gave us something different to do occasionally. E was too small for the big waterslides, but Dave and I enjoyed a few runs down them.
- we never had an issue finding lounge chairs although we did go down early a few times to reserve some premium spots.

I would definitely recommend this resort to families or couples/friends travelling on their own. I also loved Jamaica. We felt very comfortable the whole time, and it wasn't overly humid like it can be in other places.  I don't know if that was because of the time of year or just the location of the resort, but it was nice.

Phew, that was a long post! Did I leave anything out?  Let me know in the comments.