I'm back to feeling like I don't know what to say so I'm not going to say anything, but that isn't the tack to take.  I had this post planned for yesterday but then decided not to post it.  Rather I was feeling bad because I posted a black square on Tuesday, like many people did, but then I read things about how it really isn't doing anything.  And of course a simple black square doesn't do much, and usually I am loathe to participate in these social media challenges since I know that.  I do think however that it does help people to come together to show their support and it is a symbol of something to link people together, I was happy to see how many people in my circle posted it and also shared great posts and links in their Instagram stories.  And even though my circle is pretty white, I know that I hang with good people.  I did remove the square from my feed at the end of the day; I made my point but it wasn't serving a purpose anymore.

Another thing I felt bad about was that I used the phrase "diversify your feed" in Monday's post when I talked about following black voices on Instagram and Twitter.  This is again an instance where I meant well, but where I now understand this phrase hurts people as it suggests POC faces are there to colour white peoples' worlds.  I still think it is a worthwhile exercise to see people that look different and to hear what they are saying, although I may refer to it differently in the future.

One thing I wanted to do with this post was to recognize my own implicit bias and racism.  It's time for us to get uncomfortable and recognize the systematic racism that is built into this country and how it affects us, even if we know better and act better on a mostly regular basis.  This will likely be an instance where what I say isn't perfect, but I wanted to try (and "fail better").

We watched The Best of Enemies on Amazon Prime last week, and there is a scene when everyone is in the town hall meeting and when Ann Atwater (played by Taraji P. Henson) is speaking, the black people in the gallery start speaking up and interjecting with "Yes m'am" and "Amen", and my original thought was that they should be quiet.  But that was wrong of me.  Lending support to a speaker (whether in this setting, church, or others) by repeating what they are saying is just a way of communicating.  White people tend to be quiet, which we consider being respectful, and that's fine, but if different people do different things, that is not wrong, it is just different.  I immediately caught myself and said, "no, that's just how they were supporting her, and it is fine", even though it felt jarring to me at first.

Then on the weekend, while we were at the park, a group of about three black people were walking through, and stopped near us for a minute to talk.  They had three big "scary" dogs with them.  Pitbulls are apparently banned in Ontario so I don't know what kind of dogs they were, but to me, they were intimidating. And although it was the dogs that caused me to look at the group twice, and feel a little afraid, I made some assumptions about that group of people in the park, for absolutely no reason, and I recognized it and felt ashamed. I didn't have any thoughts of calling the police at all, but this is what happens, black people are minding their own business, and a white person calls the police (or worse in the case of Ahmaud Arbery and Trayvon Martin) because they feel scared (although in the case of those two men I just named I don't think fear was really a factor).  I think about this episode of This American Life all of the time.  W. Kamau Bell talks about how to talk to his kids about racism, and particularly how black people are perceived when they are "white spaces".  Take a listen.

I'm writing about it because I'm guessing other people have these same racist thoughts at times, implicit bias and systematic racism are ingrained in us, whether we like it or not and we need to identify this and fight against it. 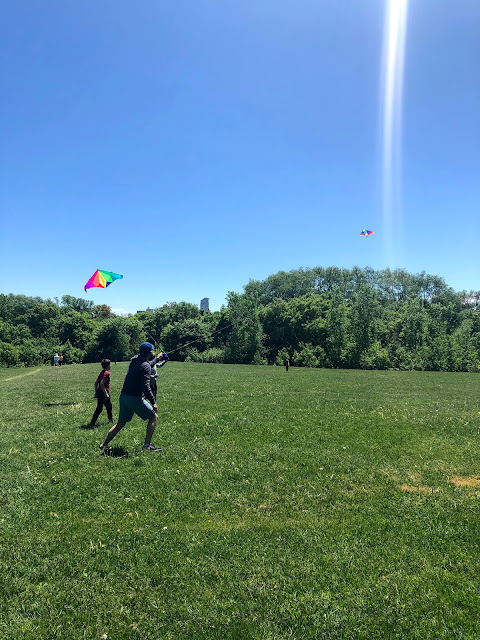 I'll be back next week. It is my birthday and I will be asking something of you, stay tuned.
Posted by TorontoSAM at 6:00 AM