Day in the Life - Covid Edition

I documented our day on Wednesday of this week.  No two days are the same, and this one was a pretty good day (unlike yesterday when Q was whining to watch TV by 9:00 and then destroyed some Lego, good times).

I had my alarm set for 7:30 but was awake before that. I laid in bed for a little while and then I heard the kids getting up. 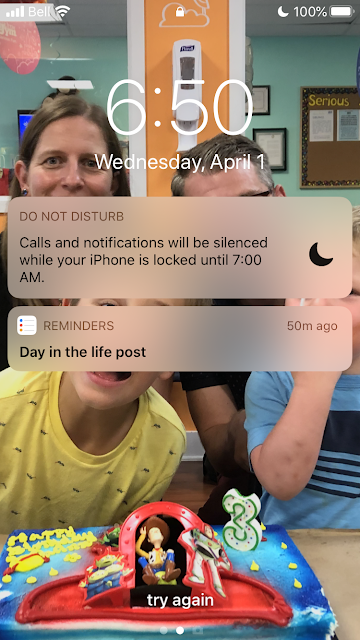 When I went downstairs, they were on the couch trying to watch TV.  During the week while we have been home, we are still trying to keep some sort of routine which means getting dressed before coming downstairs and not watching TV in the morning. 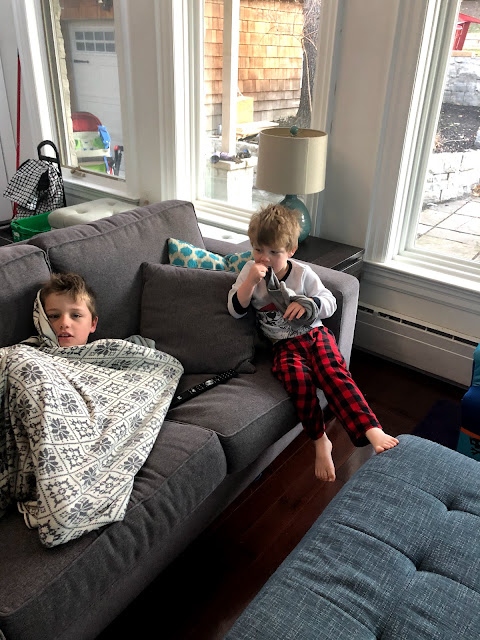 Q wanted eggs for breakfast.  I do most of the work but he likes to get involved. 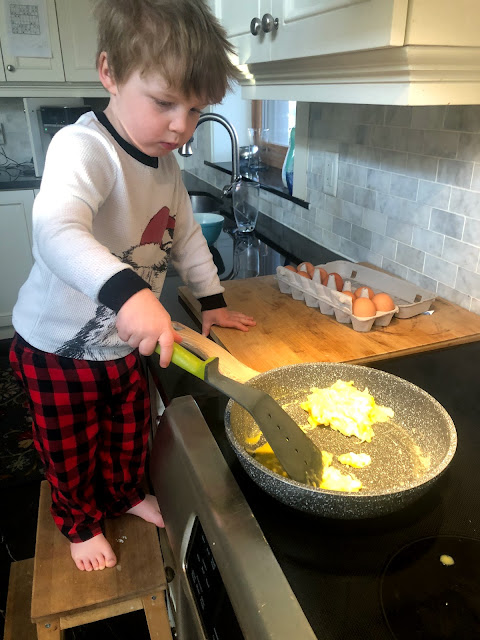 I popped out to take the garbage bins down to the street. 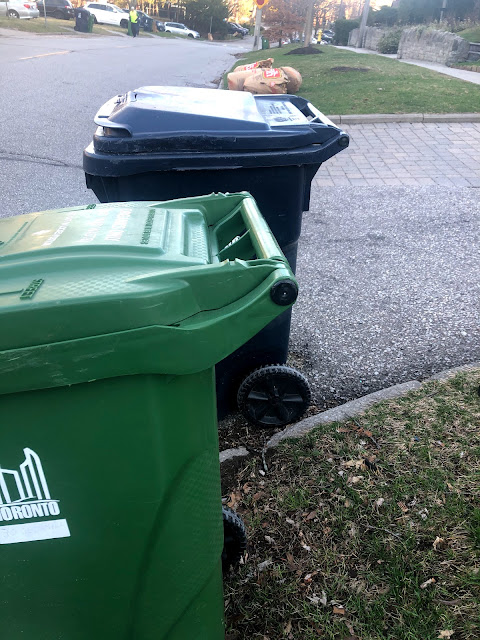 I made some oat bran cereal for my breakfast and took it over with my coffee to work on our puzzle. 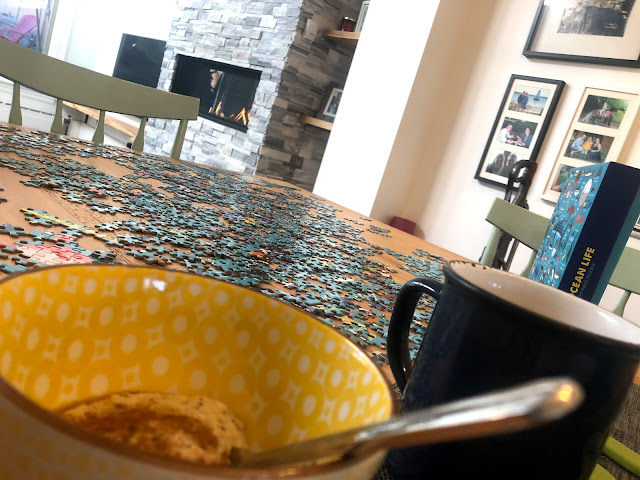 Then it was time to get to work.  I set up my laptop at the dining room table and E did a bit of work too.  Meanwhile Q went downstairs to play Legos while Dave worked down there. 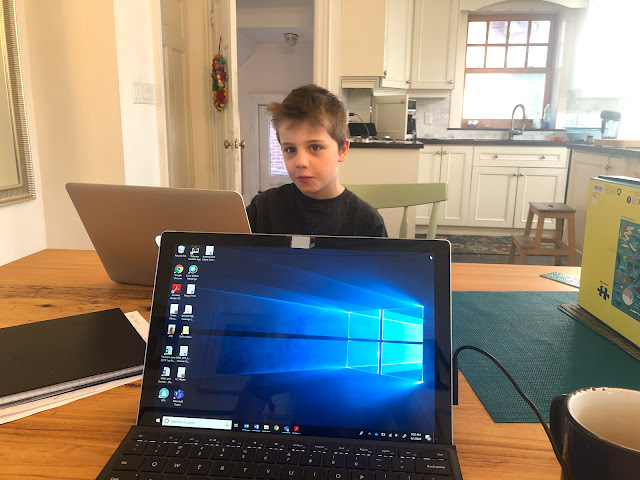 He had to do a word search for his class, so when he was done we snapped a photo and uploaded it to the Google Classroom.  The school hadn't really gotten anything going work-wise until this week, but it sounds like the kids will be getting some assignments going forward. 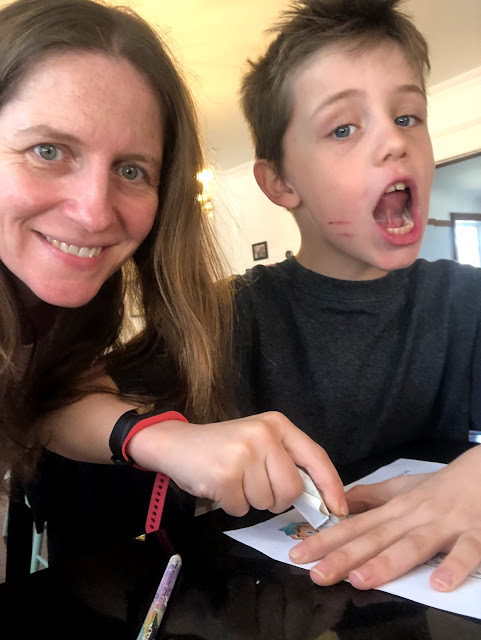 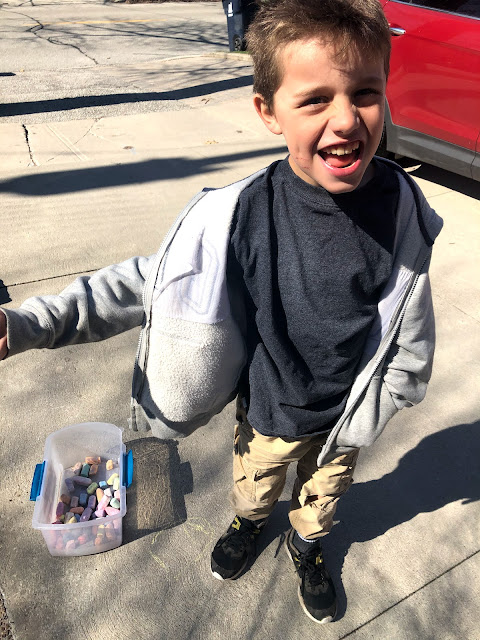 We wrote some chalk messages on the sidewalk, and I traced both of the kids so they could colour themselves in.  I see people stop all the time to read our messages :) 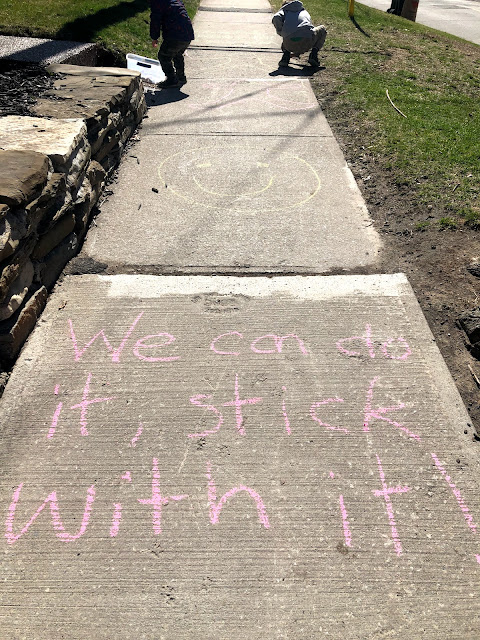 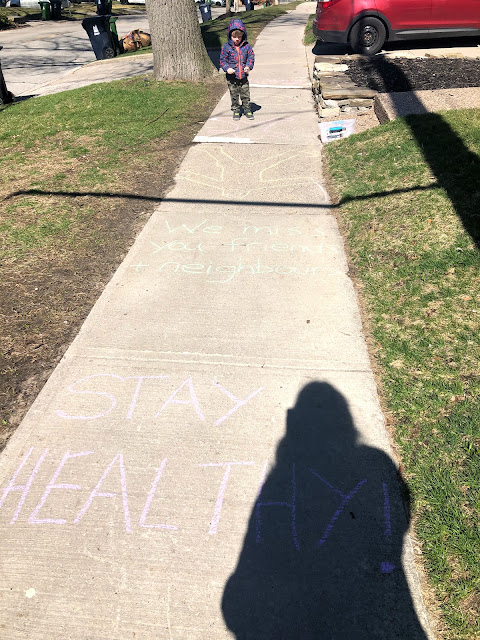 We went back inside to have lunch, egg sandwich for me, and some more puzzle work. 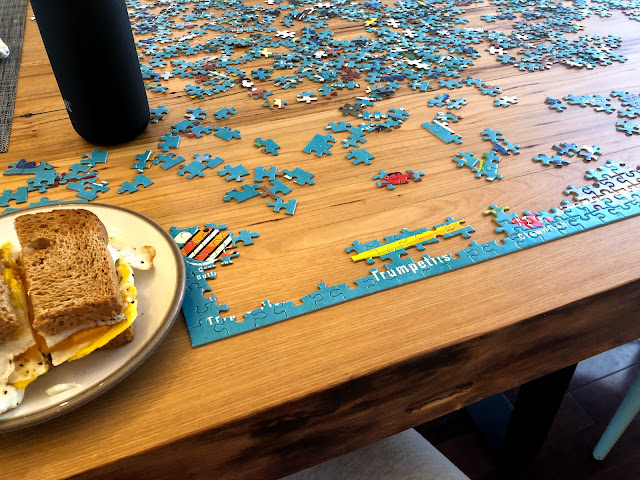 E has been joining Mo Willems for doodling each lunch time for the past three weeks.  He is finishing that up today but you can go here to see all of the episodes.  He has really enjoyed it. 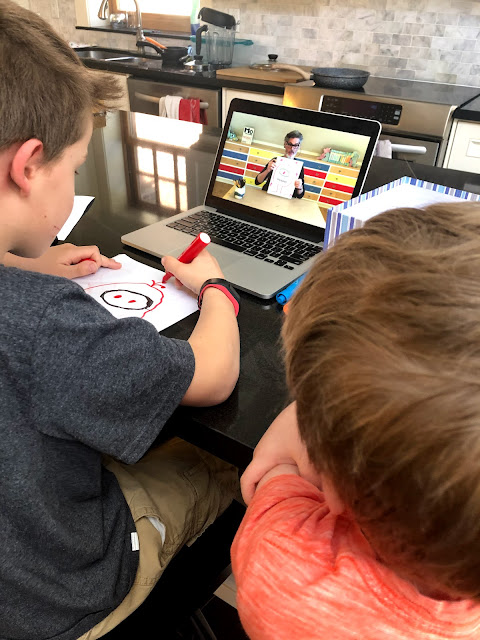 I did a bit more work in the afternoon, although this was not a typical day for me.  I didn't have any scheduled meetings and very few phone calls, so I was bit more flexible to go back and forth between work and the kids, which was a nice change. 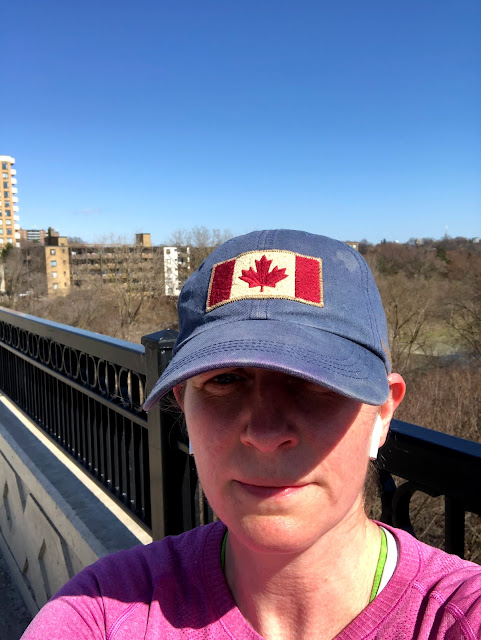 We had sausages on the BBQ and french fries for supper.  Then I joined my trivia team online.  This is put on by the local brewery in my hometown. 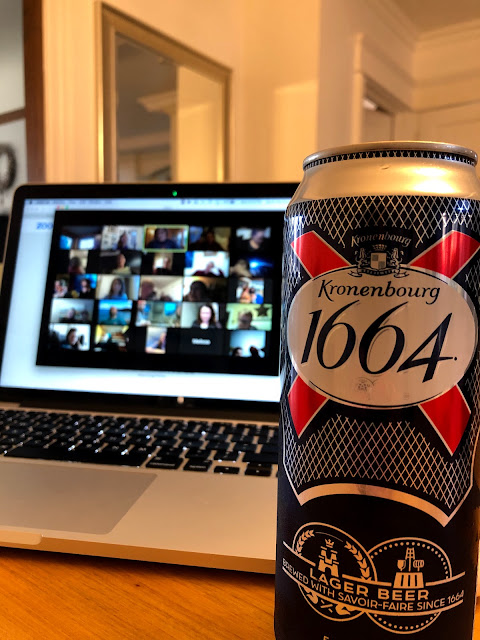 After trivia, I put Q to bed.  We snapped this after the lights were turned out. 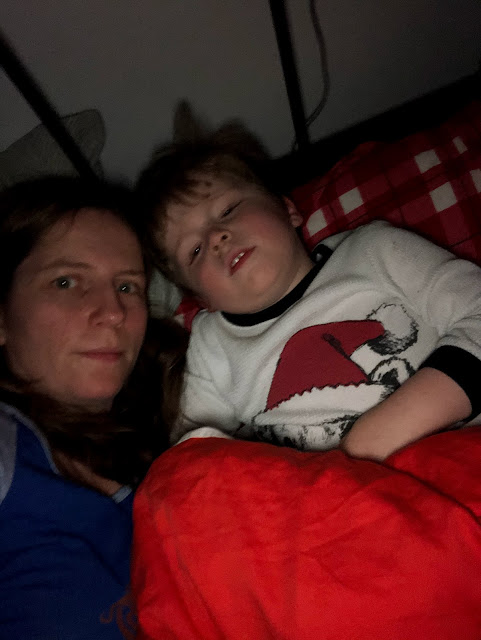 I went downstairs and E was playing a new game on his Nintendo.  I was forced to play a few rounds too. 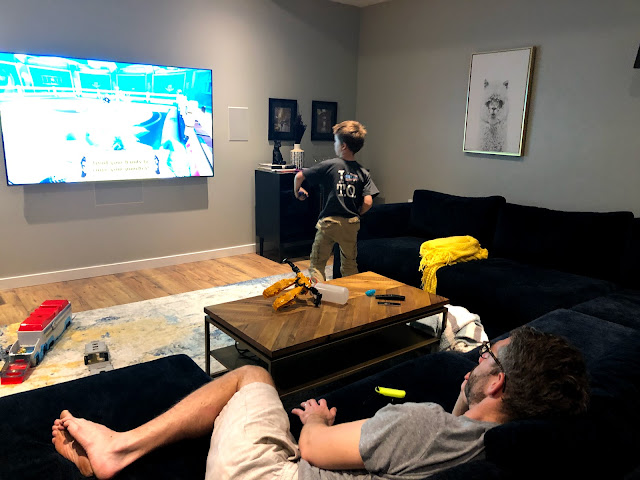 I told Dave I needed a photo of him. 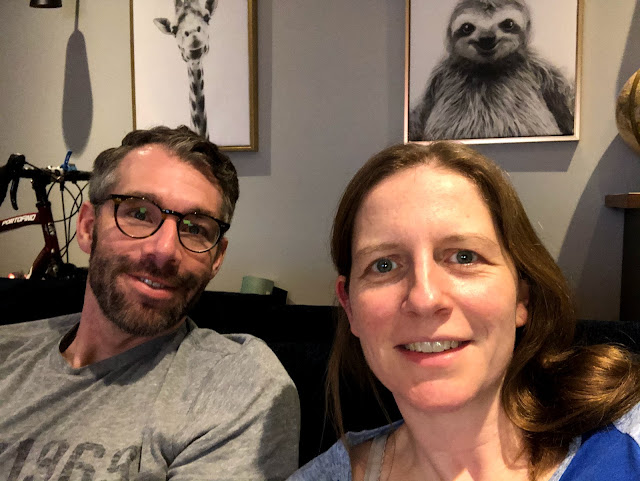 E went to bed and Dave and I watched The English Game on Netflix. 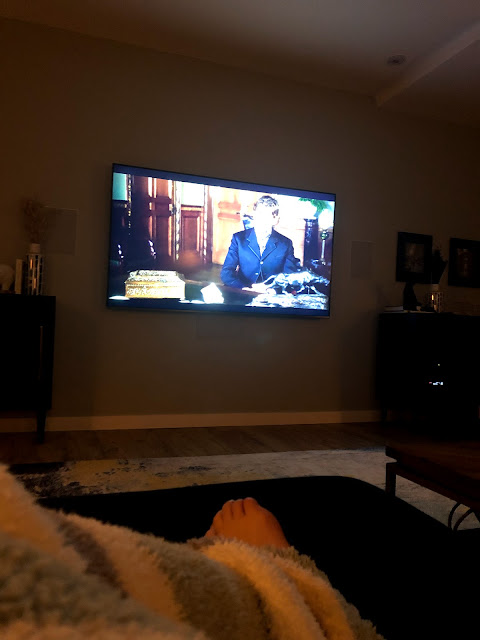 Another day of isolation done.