We found lots of fun things to do on the weekend - starting with kite flying on Friday afternoon.  We have been watching and listening to the Mary Poppins so "Let's Go Fly a Kite" has been on the brain.  Dave found his old kite and took the boys to fly it in a field.  It was not super windy but here is proof they got it up in the air at least once. 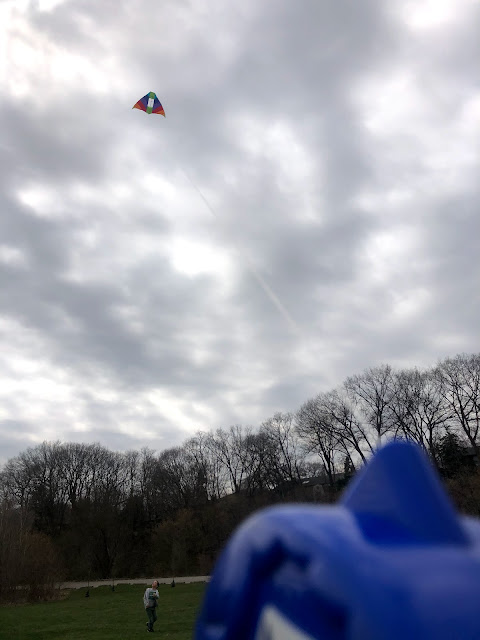 We made pizzas for supper and I used my Uncle Robert's combination of sliced tomatoes and black olives.  So delicious! 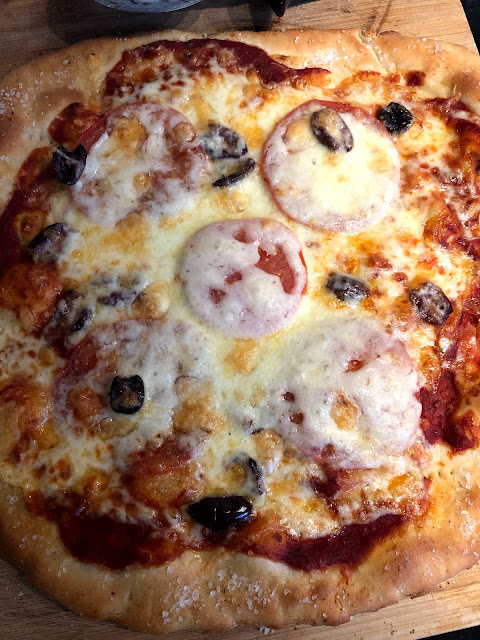 Then we went down to watch Toy Story 4 with the gang. 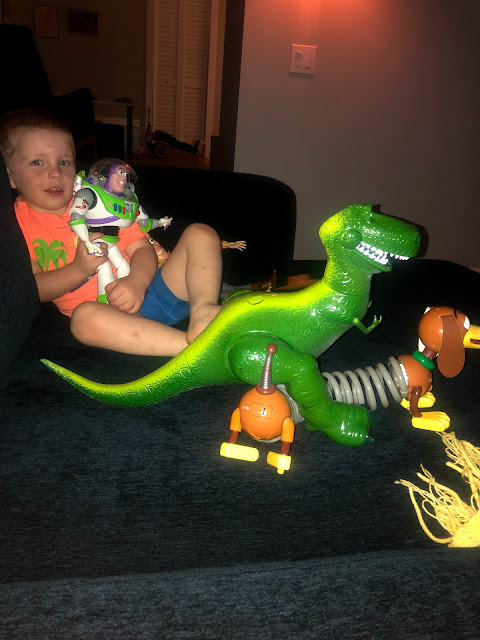 On Saturday morning I got up early with Q and then was able to make pancakes before my Zoom workout started at 8:30.  The boys played legos in the basement and I read my book. 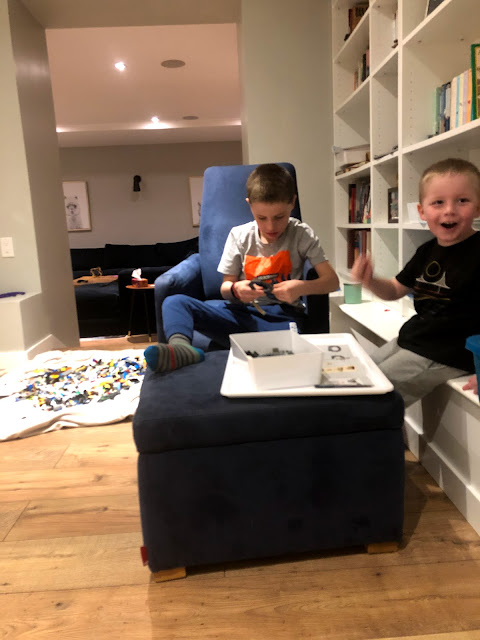 After lunch the boys went to ride their bikes in the parking lot. 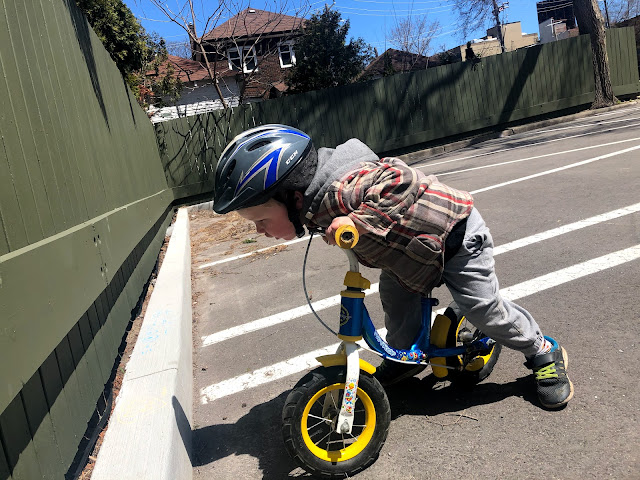 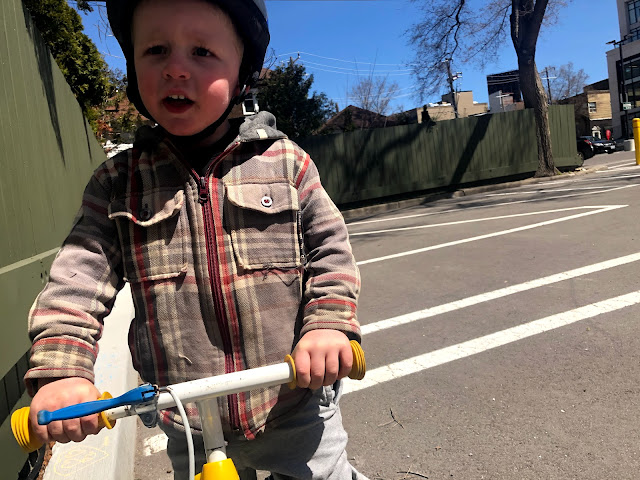 While we were out we got the idea to make ice cream.  We fortunately had enough cream so we made two kinds - mint chocolate chip and strawberry.  We have one of those ice cream balls that works with ice and salt to freeze the ice cream while you roll it around. 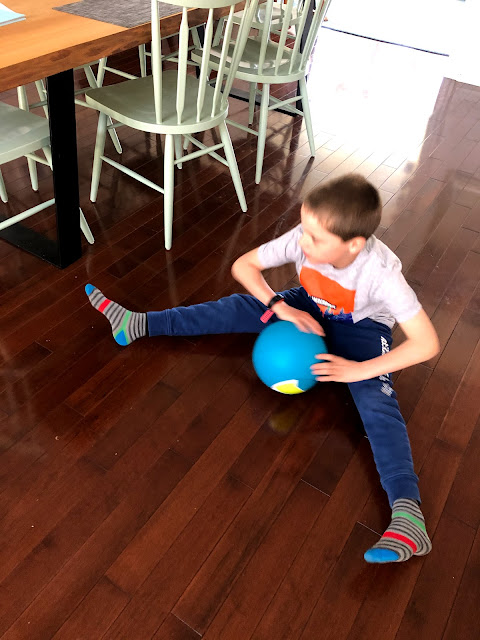 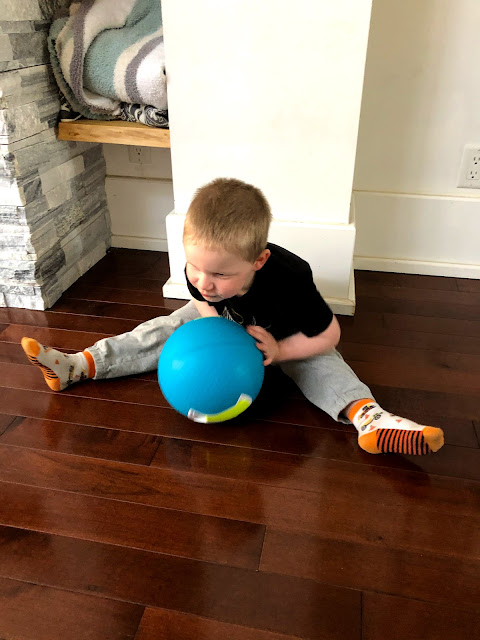 While we were doing that Q actually fell asleep on the floor. 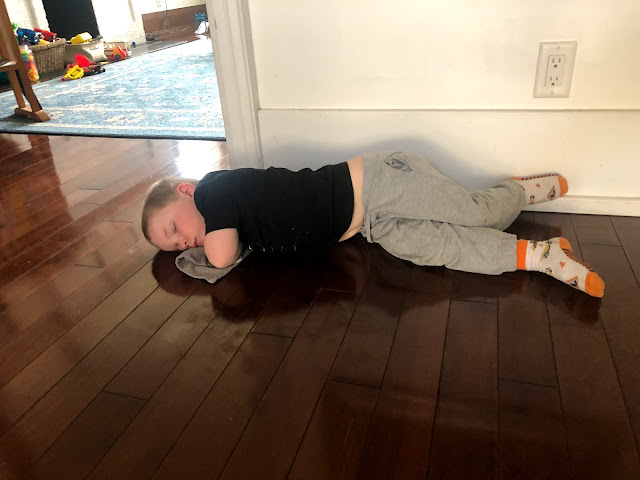 Back outside for a bit before supper. 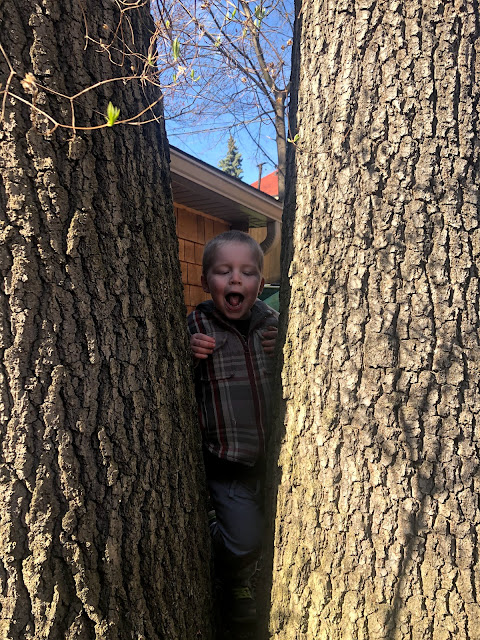 We tried opening this wine but the cork was stuck and since it was a rubbery cork, not a natural one, we couldn't dig it out.  Dave tied a rope around the neck and lit it on fire (tips from the Internet!) and the cork came up enough that we could get it open. 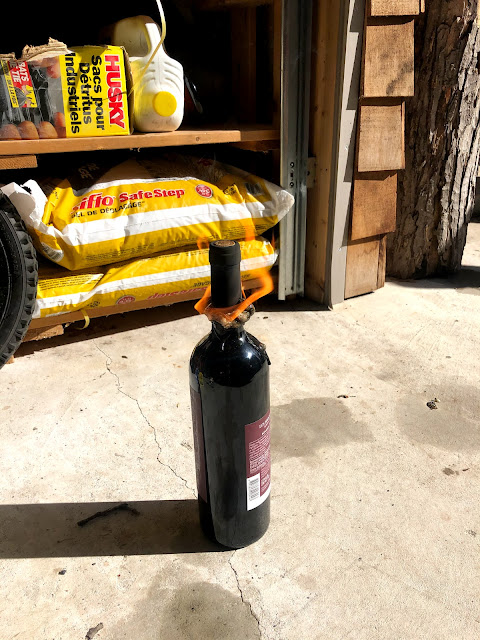 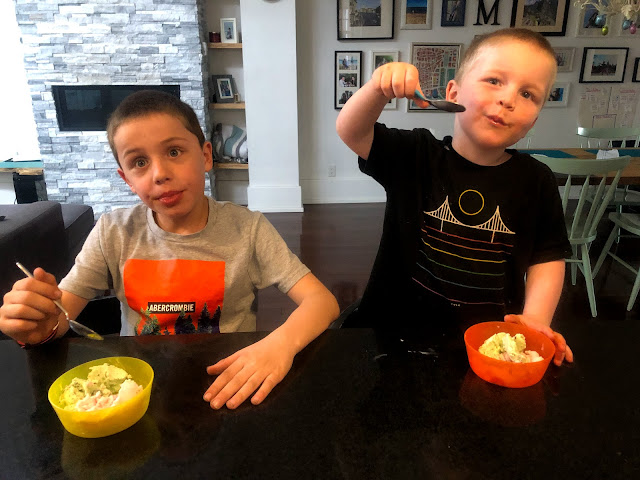 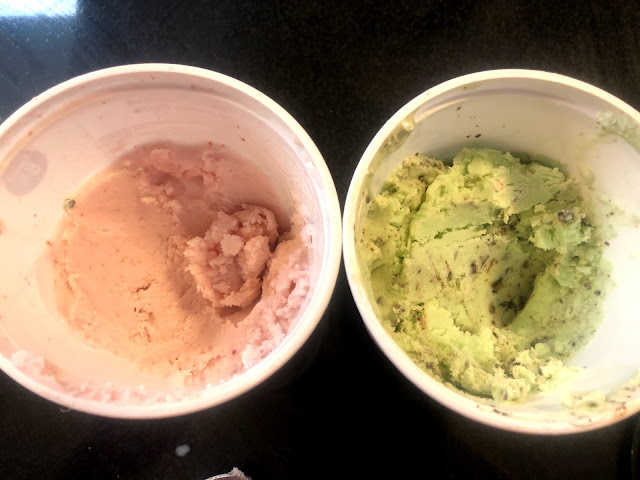 That evening we "met" up with some neighbours on Zoom and enjoyed a few beverages together.

We watched some movies in the morning and I read more of my book.  Then it was time to cut Dave's hair.  I watched a video on YouTube and figured it out. 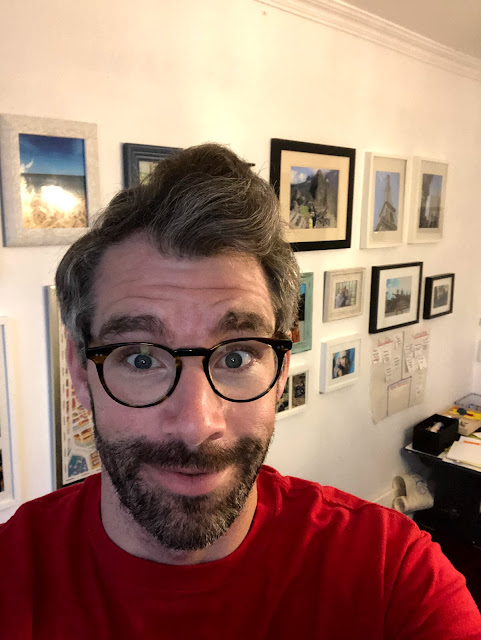 Collecting the hair at the top around his crown, chip clip since we don't have fancy hair clips. 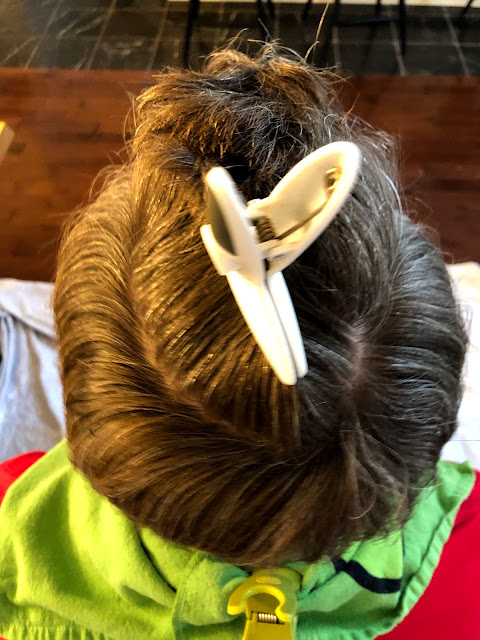 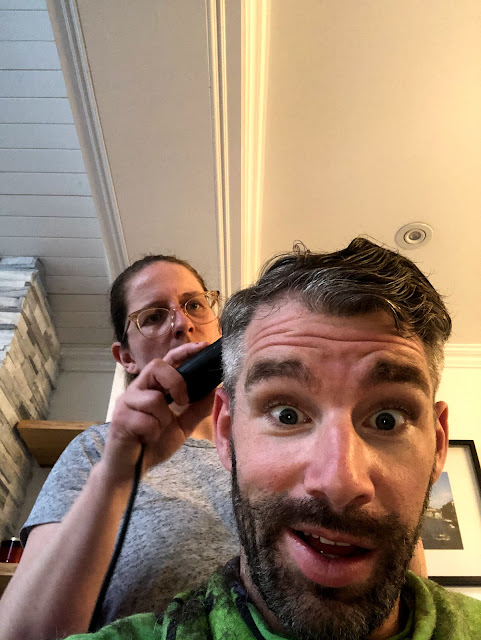 And after.  I did a pretty good job if I do say so myself. 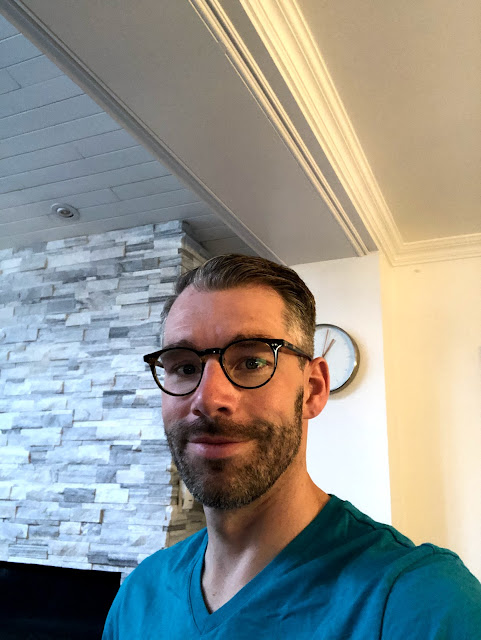 Dave thinks this means I will cut his hair all of the time, but that will not be happening, haha! 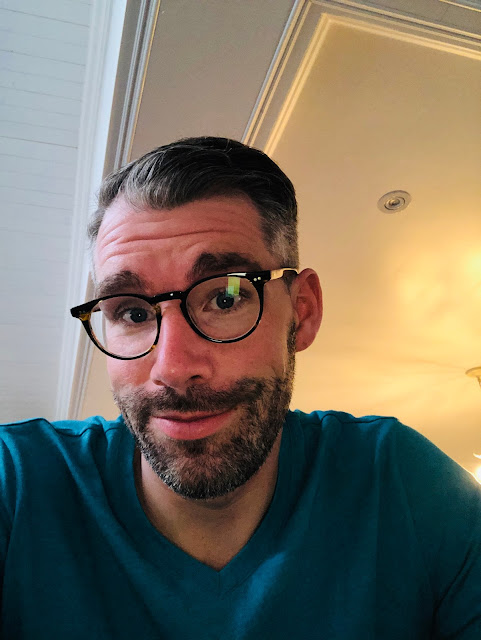 I took Q for a drive to try and get him to nap but he did not so we just came home.  Then we all hung out on E's bed and watched our screens. We went to McDonalds drive thru for our dinner but sadly we got the wrong order and didn't notice until we got home. It wasn't the end of the world though, we just got three Happy Meals instead of two and Quarter Pounders instead of Big Macs (plus two McChickens).  The extra fries did not go to waste.  Then showers and bed for the boys.  Dave and I watched SNL and it was really funny.  It can be hit or miss but I thought all of the skits were great. I was in tears at the end #turtel.