Last fall Dave and I went to New York City for the first time.  We did lots of things, typical tourist things, but we really enjoyed the restaurants we visited so I decided to write this post about the places where we ate.  Some were just regular places, but some were spectacular.  I didn't take pictures of everything we ate, but I did get a few.  Links to these places are also included.

We stayed at The Chambers Hotel.  It has its own momofuku restaurant, Ma Peche. We ate there the first night when we arrived in town.  It was not your typical hotel restaurant, and we enjoyed trying a few new things and some fun cocktails. 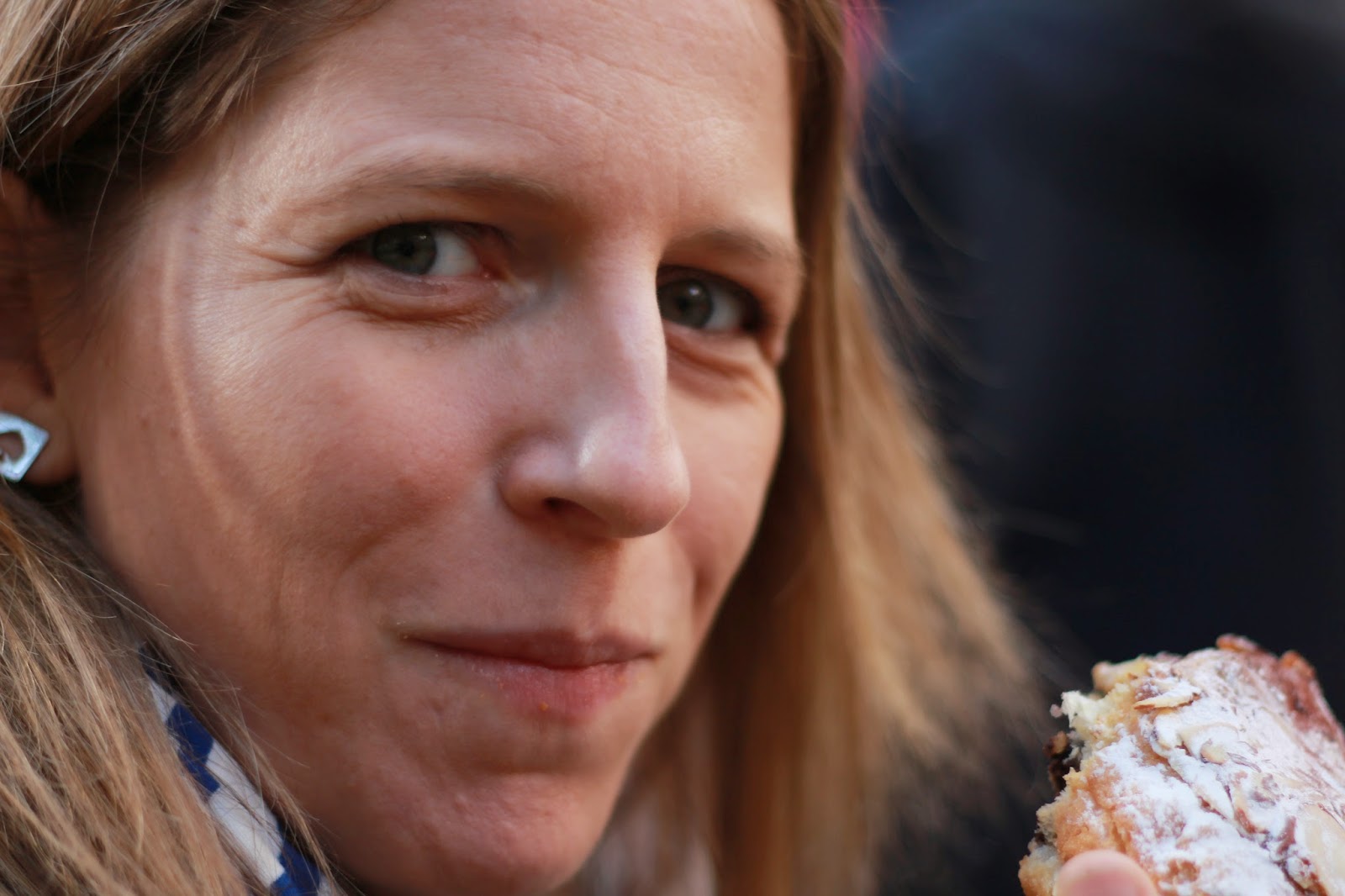 Our first stop was Bouchon Bakery in Rockefeller Plaza for breakfast.  If you watch the Today show, it's the coffee shop that is always in the shot when they are outside.  This day I had an almond croissant, but when I went back a few days later to see the Today show, I had a ham and cheese toasted croissant and it was amazing.

That night we headed to the Village to find a place to eat.  We had done some research about some good restaurants, but they don't take reservations so we knew we were taking our chances.  We finally decided on The Spotted Pig.  It had a two hour wait list, but we didn't have to stay there the whole time so we had drinks at The Orient Express and then walked around the Village.  The Orient Express was really neat, it is a tiny place and the idea is that it is like the inside of a train car.  Cool atmosphere and an inspired cocktail list.  Our meal at the Spotted Pig was great.  I would go there again.

On Saturday we went to the Chelsea Market. If you are in New York, go here.  It not only has some really neat food shops, it has some clothing and antique stores.  We did buy E some mittens, but not much else.  I wanted to buy everything though, art work, jewellery, scarves, etc. 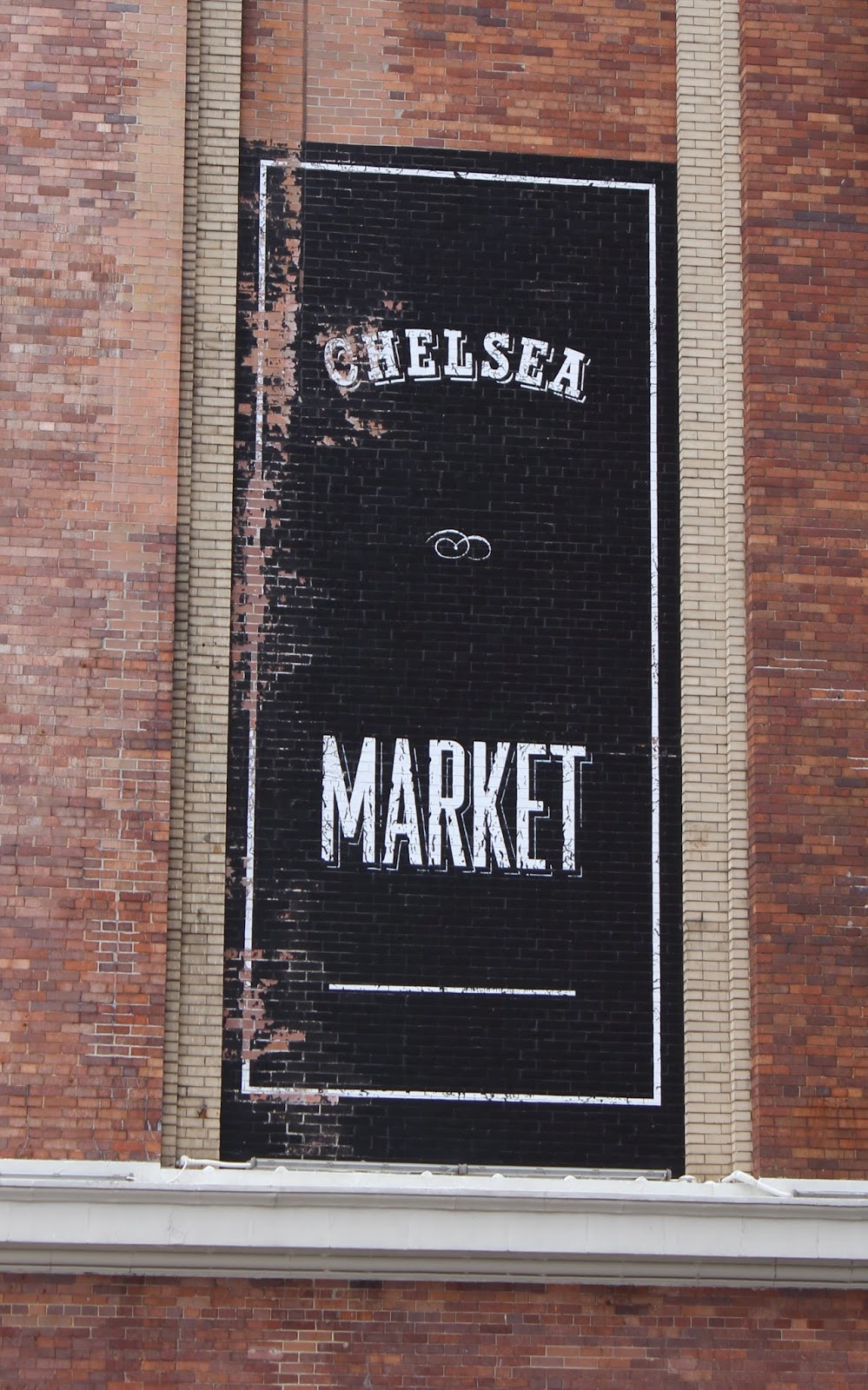 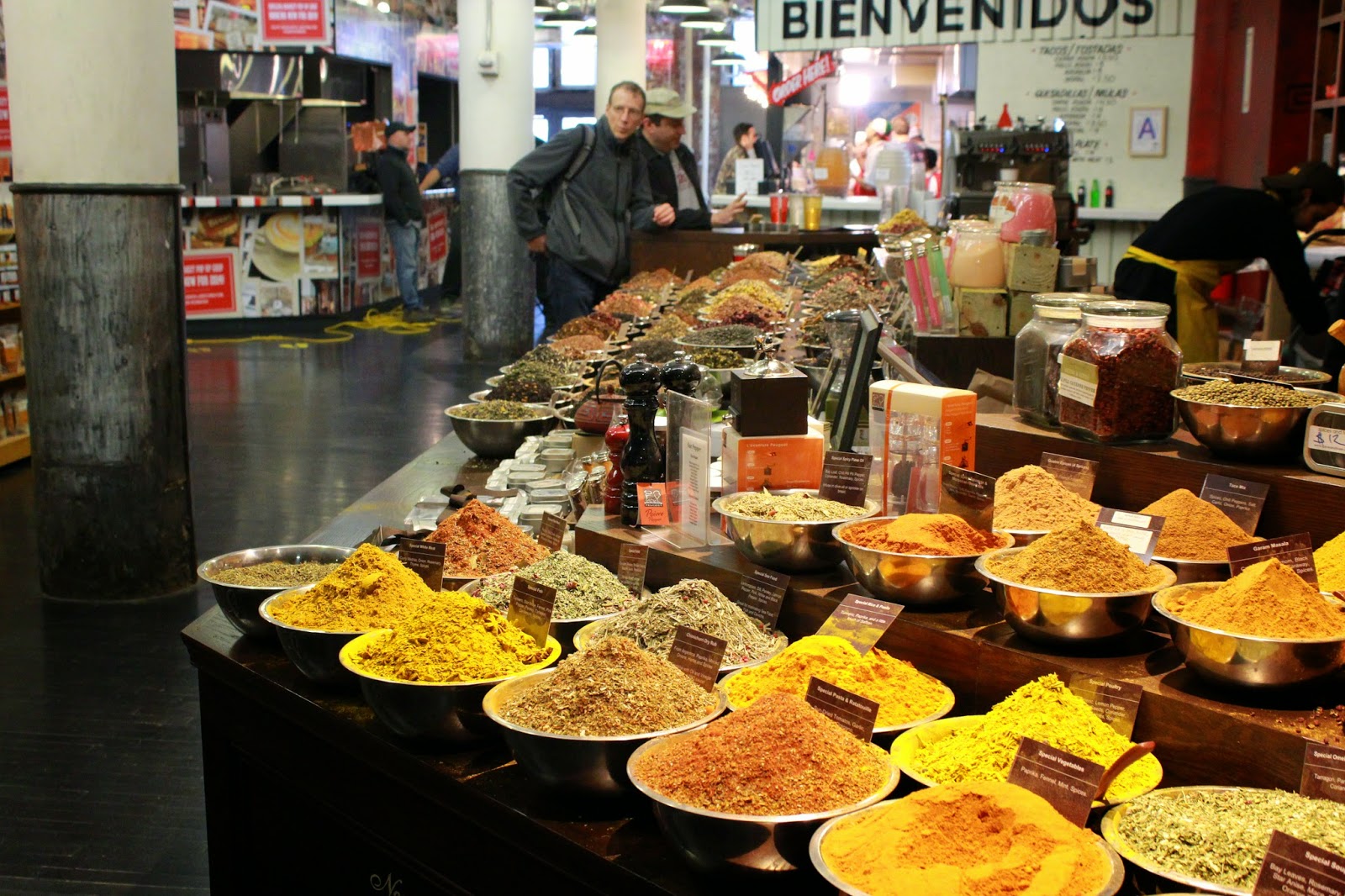 One of the stalls with their multitudes of spices. 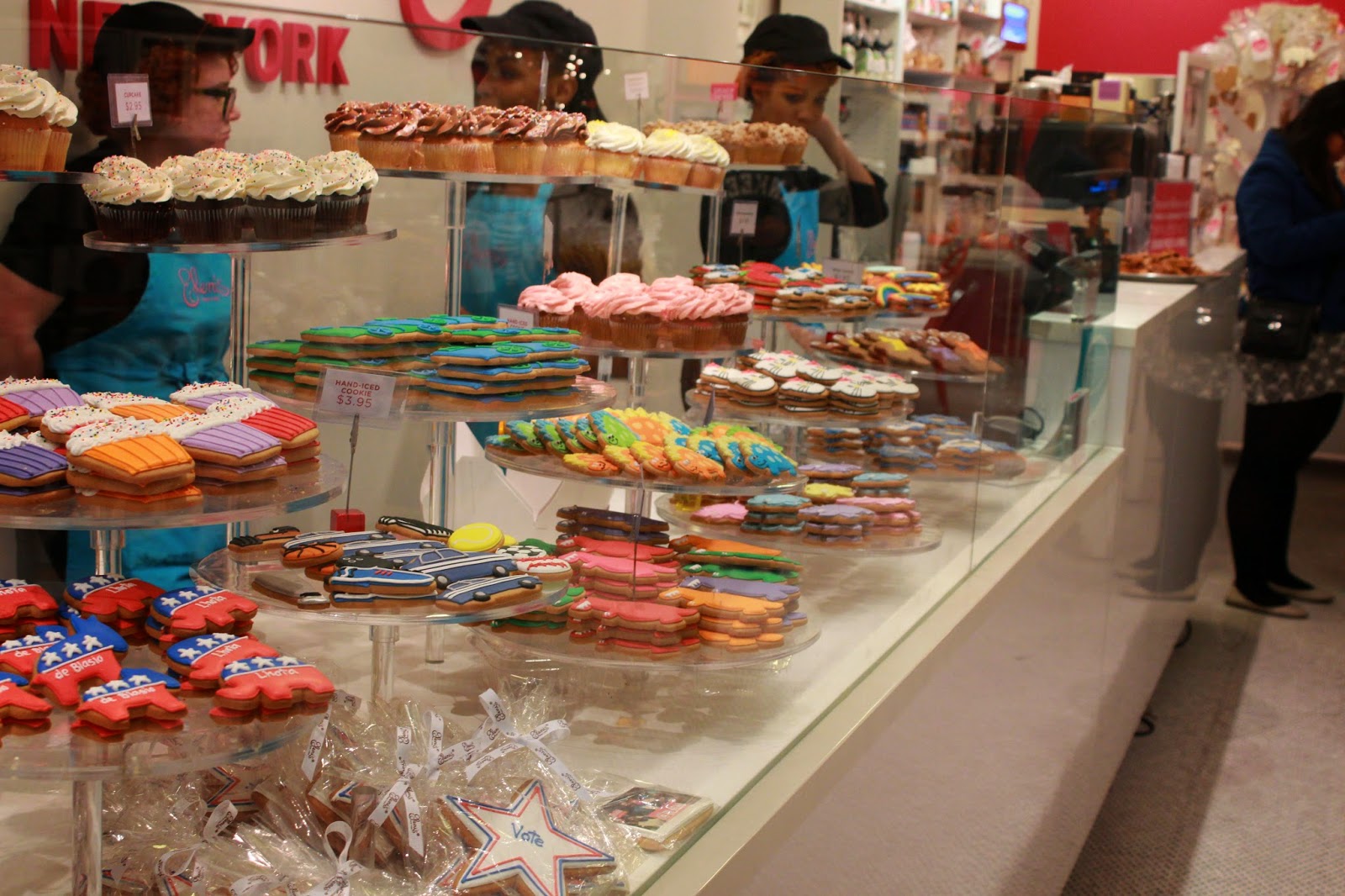 The most adorable cookies.   We bought a couple for ourselves and some to take home.

When we were planning our trip to New York, I asked for some suggestions.  Someone suggested doing a food tour of Greenwich Village.  This tour was worth every penny.  It takes place over three hours, we visited 8 shops/restaurants, learned about some of the history of the Village, and were stuffed at the end of it. 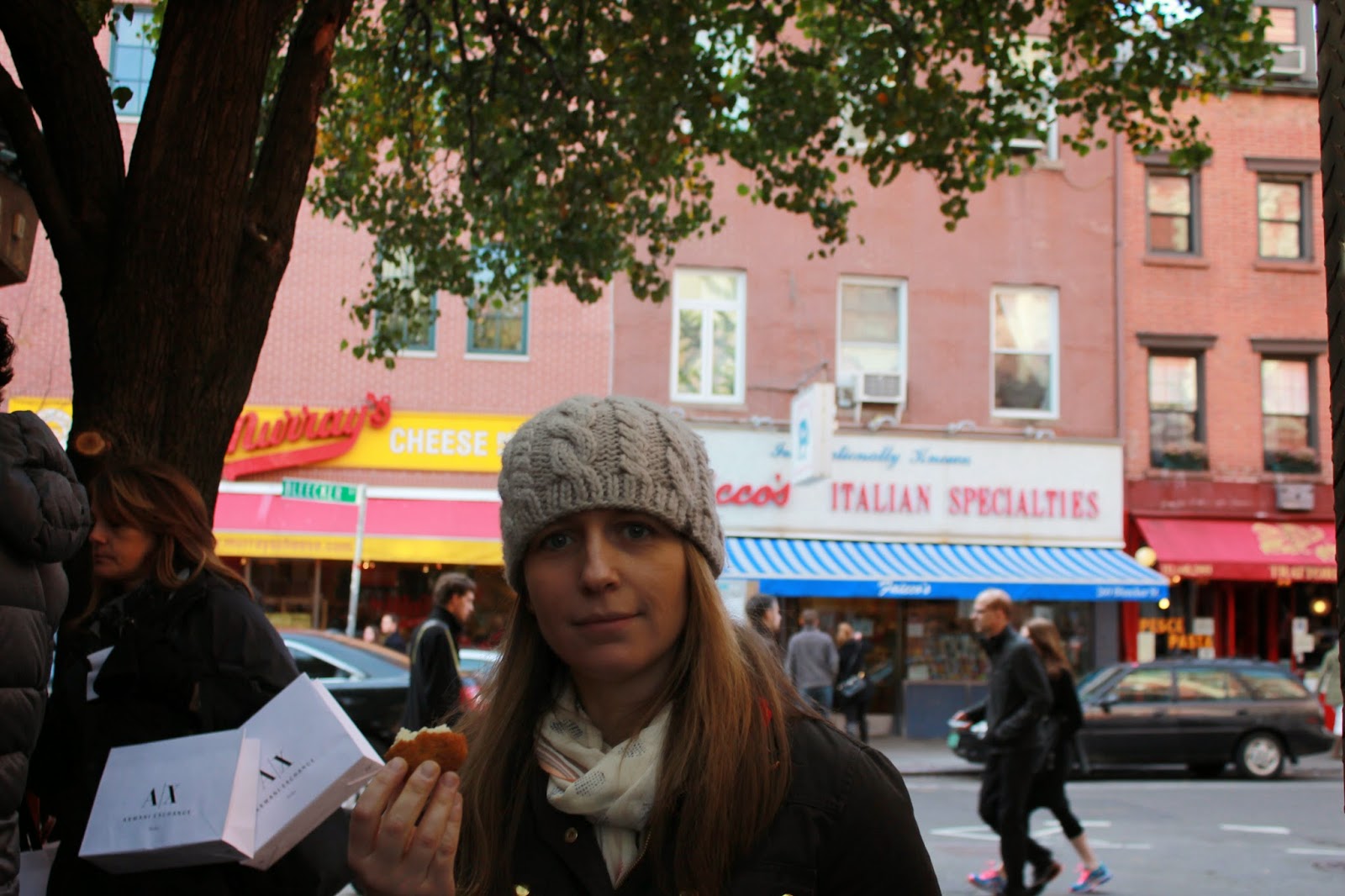 Rice ball.  I didn't know what this was and I had always assumed it would it be similar to sushi rice, I was so wrong.  It is soft risotto rice, with cheese, deep fried.  We ate it with our hands, but you could also dip it in marinara sauce. 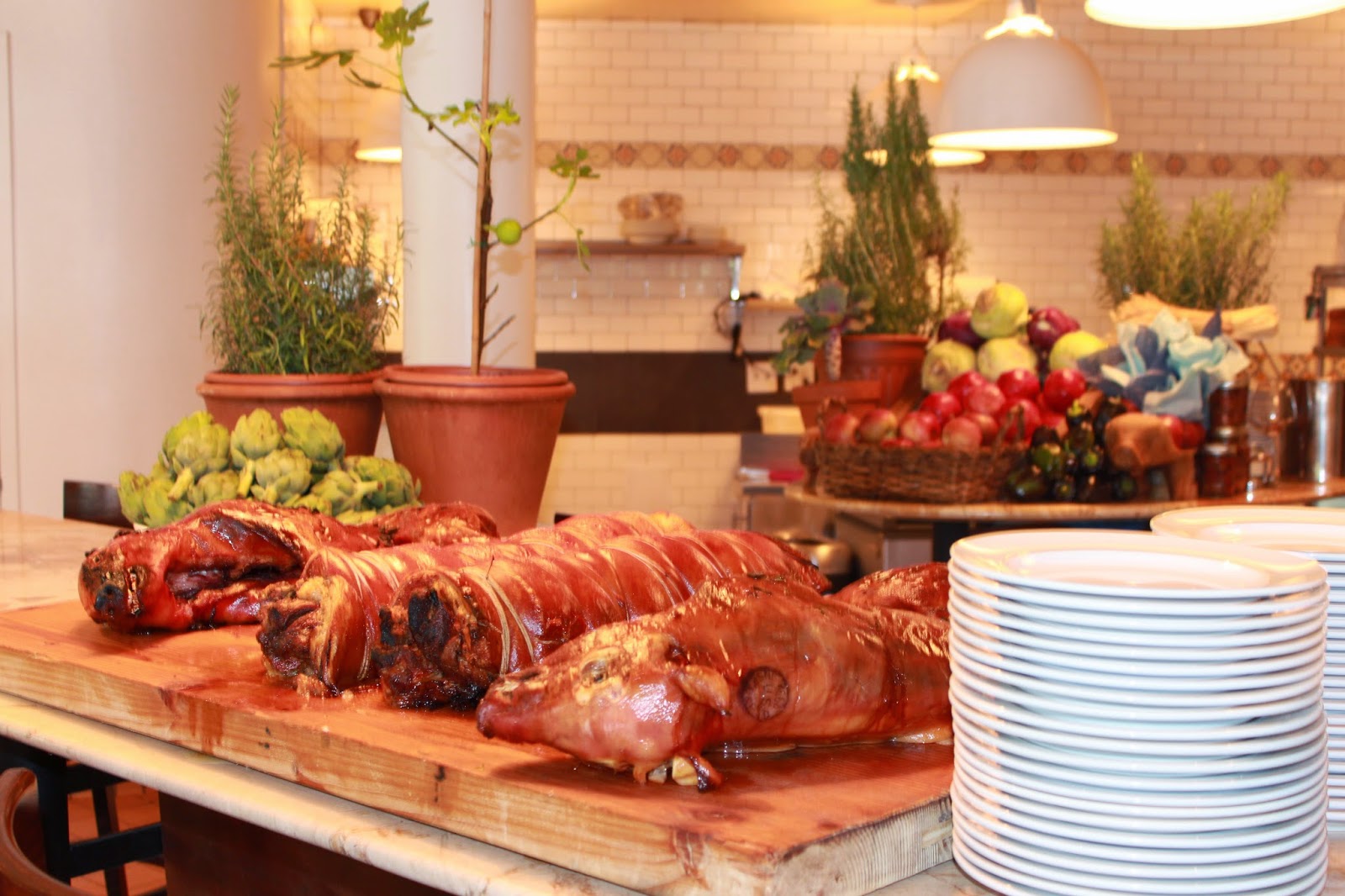 At one of the restaurants, they were having a private party in the main dining room, complete with pig. 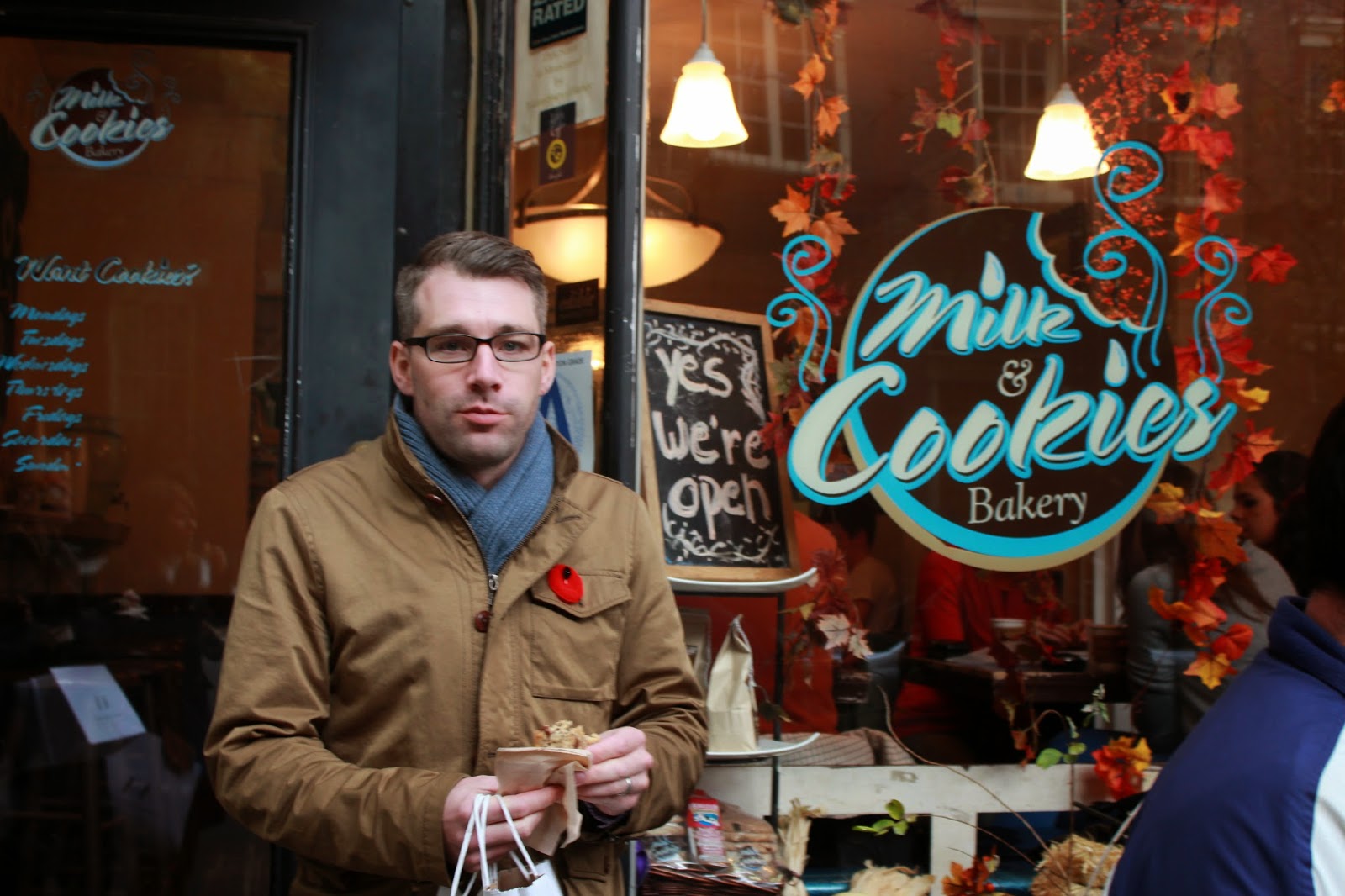 Fresh, warm cookie
That night we went to Dos Caminos.  I don't think it was the most trendy of their locations, but it was busy, we could walk from our hotel, and the food was good. 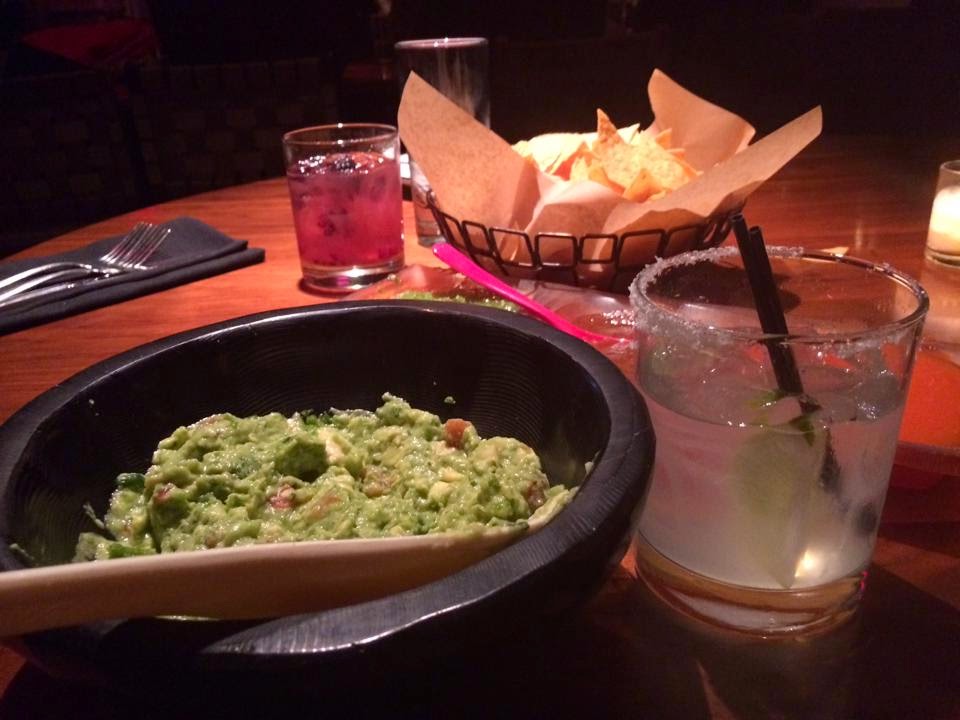 Not much makes me happier than fresh guacamole and a lime margarita on the rocks.

On Sunday morning, we went to the Loeb Boathouse for brunch.  This was the place in 27 Dresses where the sister wants to have her wedding.  It was very posh, maybe a little overpriced, but a great experience.  We loved Central Park, and would definitely stay close to there again. 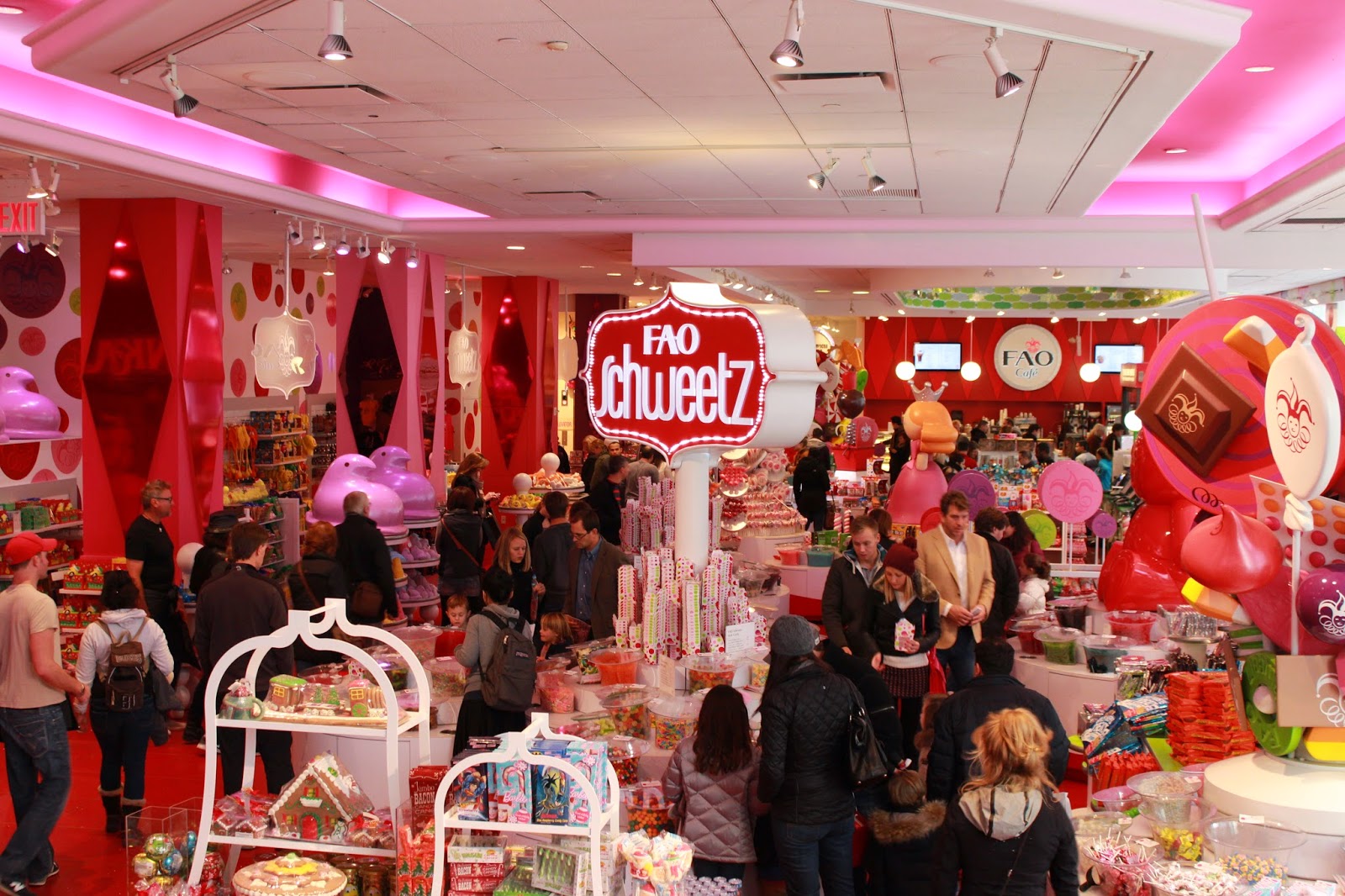 This is the candy store part of FAO Schwartz.  We didn't buy anything here because we had just left Dylan's Candy Bar, which is an amazing three storey candy store owned by Ralph Lauren's daughter.  Word is she is opening a location in Toronto, can't wait!

That night we headed back to the Village for supper and a comedy show.  We had drinks at The Blind Tiger.  This is the site of one the oldest bars in the Village. Then we ate at Home.  Both the bar and restaurant were recommended during our food tour.

The next day after attending a taping of Live with Kelly and Michael, we took the subway down to SoHo for some shopping.  We had lunch at Olives which is just a sandwich counter really, but very fancy yummy sandwiches. 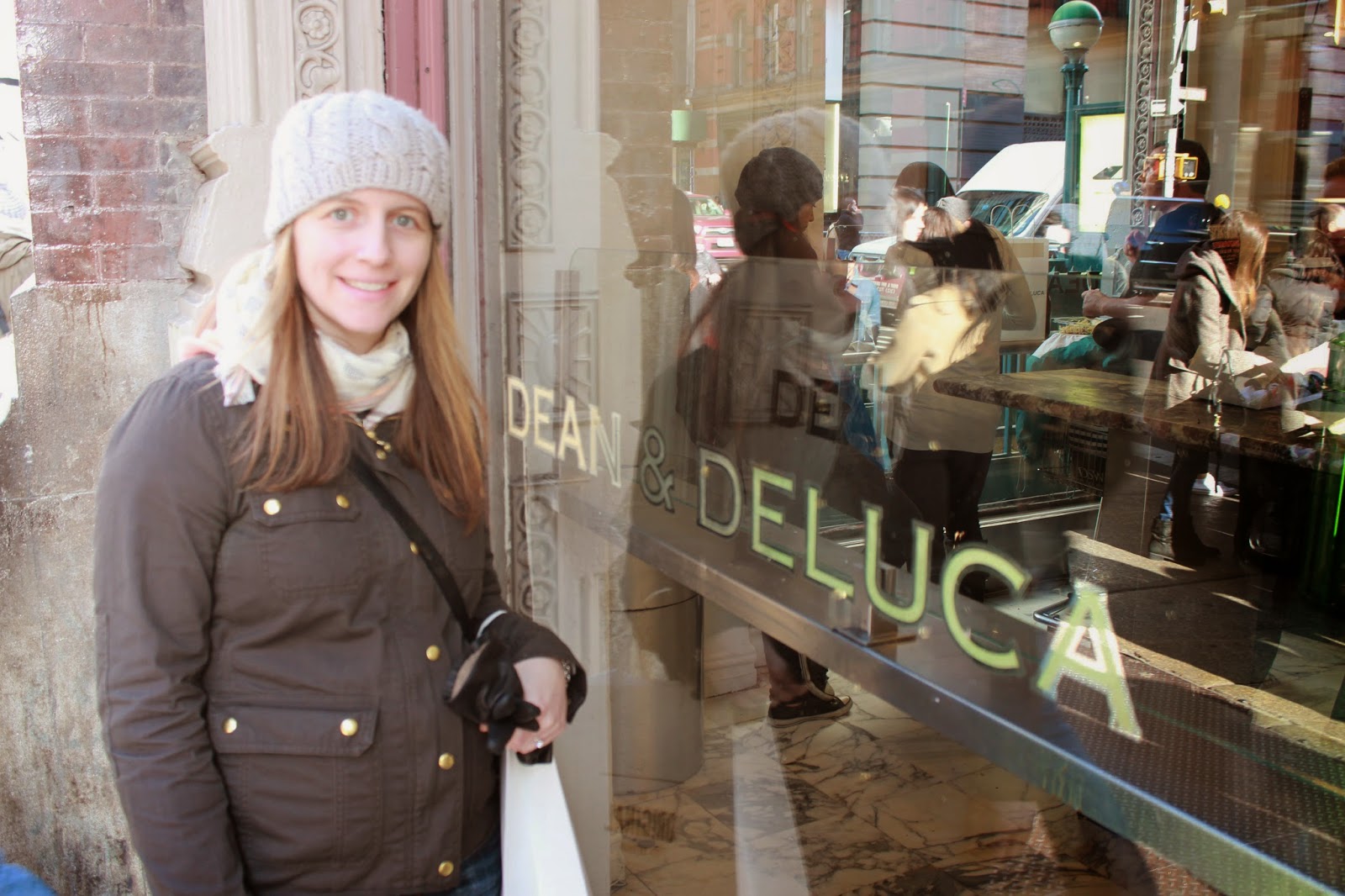 A fan of Felicity, I had to search out a Dean and Deluca.  This one was in Soho. 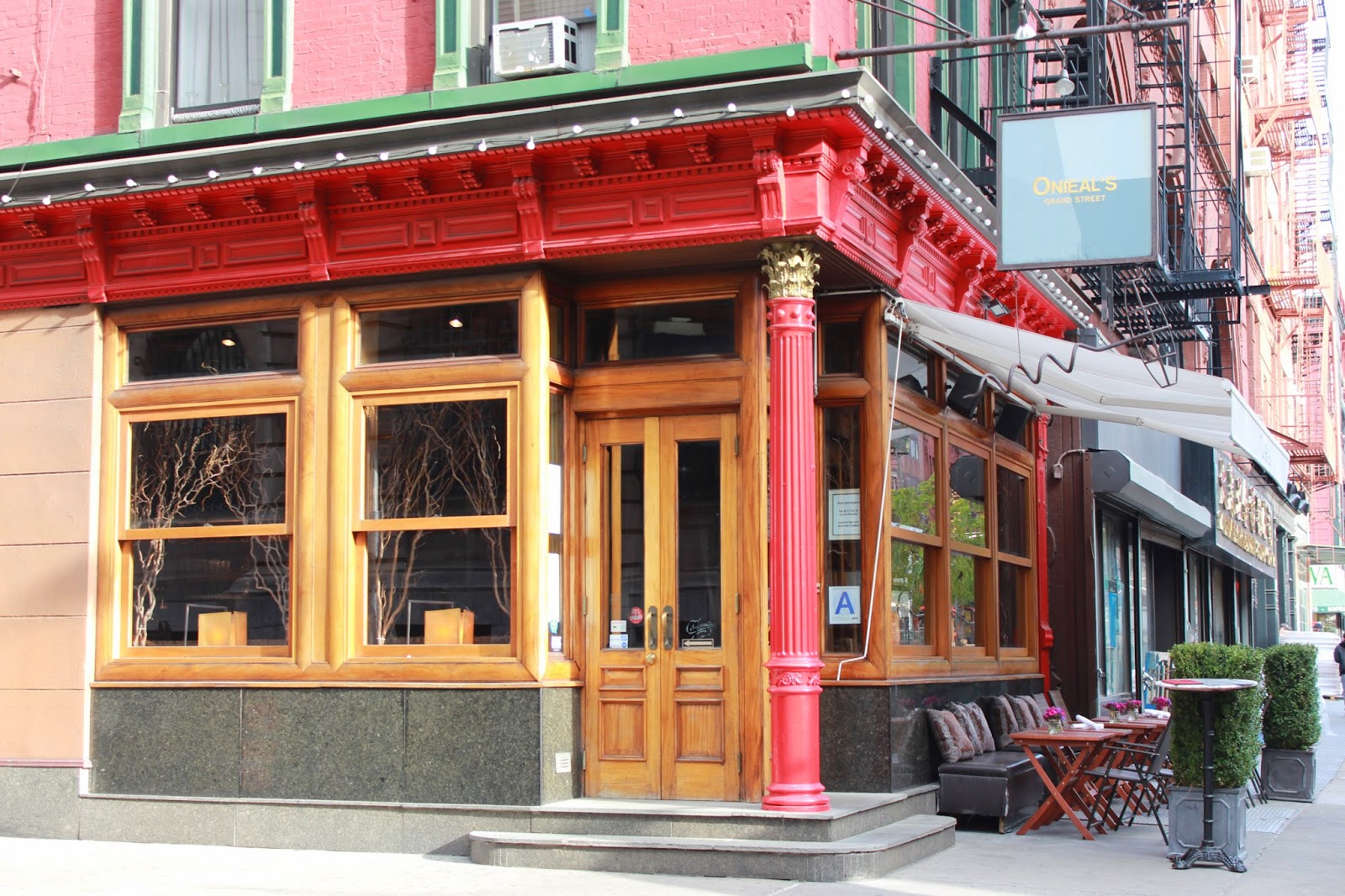 We didn't eat here, but Sex and the City fans will recognize this as "Scout", the bar that Aidan and Steve opened.  It's not actually on Mulberry Street, but it is a few blocks away.
Our last night in New York, we had kind of a weird dinner.  First we went to the John Dory Oyster House for their happy hour special of oysters and champagne.  After a few rounds of that, we went back up to Rockefeller Plaza to see if the Christmas tree was up yet (it wasn't) and got a cookie at Bouchon Bakery.  Then we got take out from The Burger Joint and ate it in our hotel room.  The Burger Joint is located behind a curtain at Le Parker Meridian, conveniently down the street from our hotel.  You'd never know it was there unless you were looking for it, but it has been there for years. The burgers and fries are greasy, but great!  It's a little like the Soup Nazi, you have to know what you want when you step to the counter, their menu is small, and you can't ask for substitutions.
I hope you've enjoyed this little food tour of New York.  I know we barely scraped the surface of New York, but that's just an excuse to go back again.
Posted by TorontoSAM at 6:00 AM