Well we are in the dead of winter here in Toronto and I'm actually enjoying our snow.  We had a lot of cold weather early in the winter but no real snow that we could play in. Now we have a lot and it's fun to be outside.  I even secretly enjoy driving in winter weather.  Of course we have all wheel drive and snow tires so I'm better off than some people but I really do enjoy the challenge of controlling speed and braking.

Anyway, we did enjoy the snow on the weekend, which is good, because it never stopped for the entire weekend. 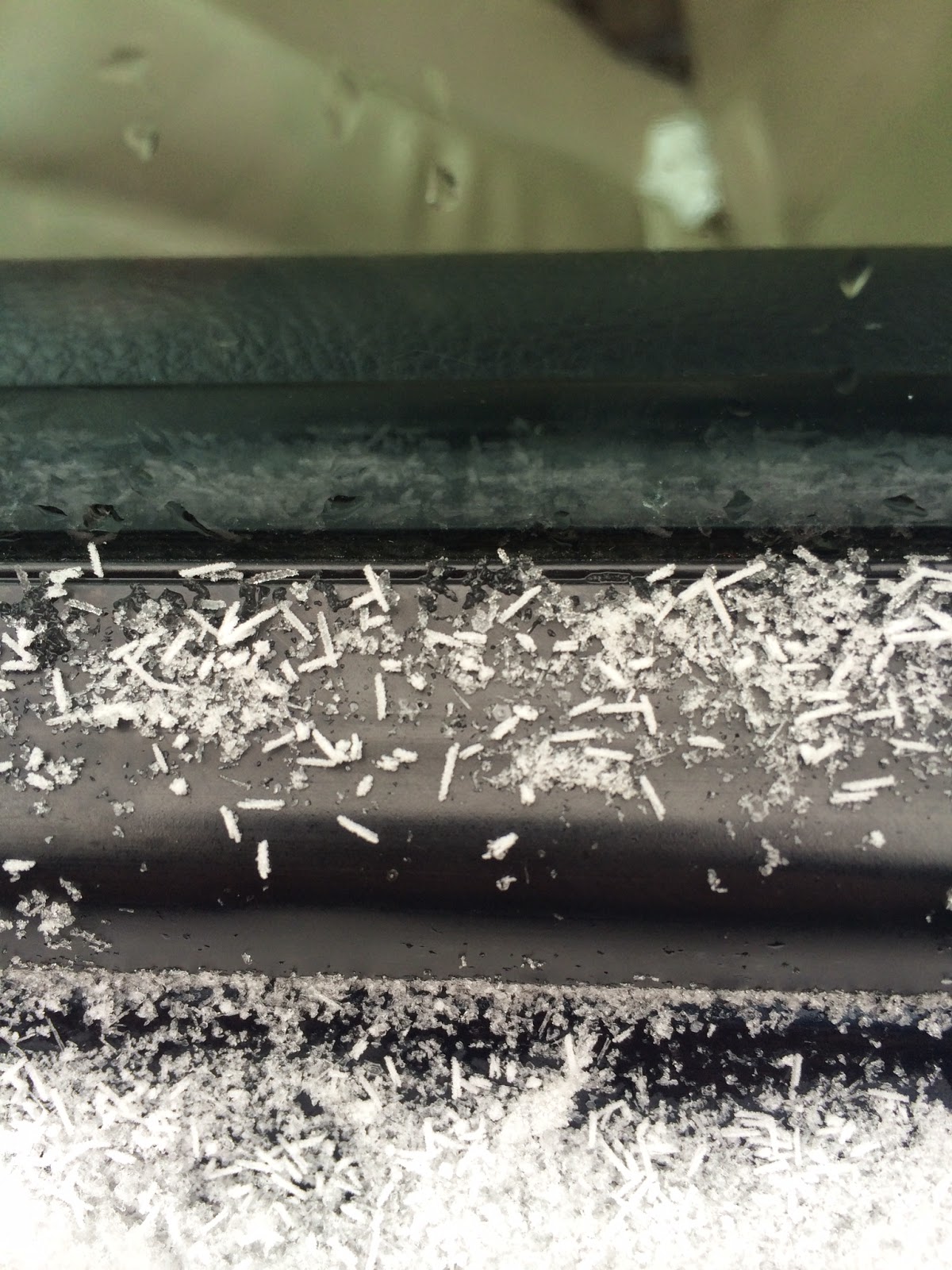 The snowflakes on Saturday morning were long and flat, the looked like coconut flakes.

We headed out to swimming but the pool had just been fouled so E's class was cancelled.  So we headed home after a quick stop at the grocery store and cleaned up. 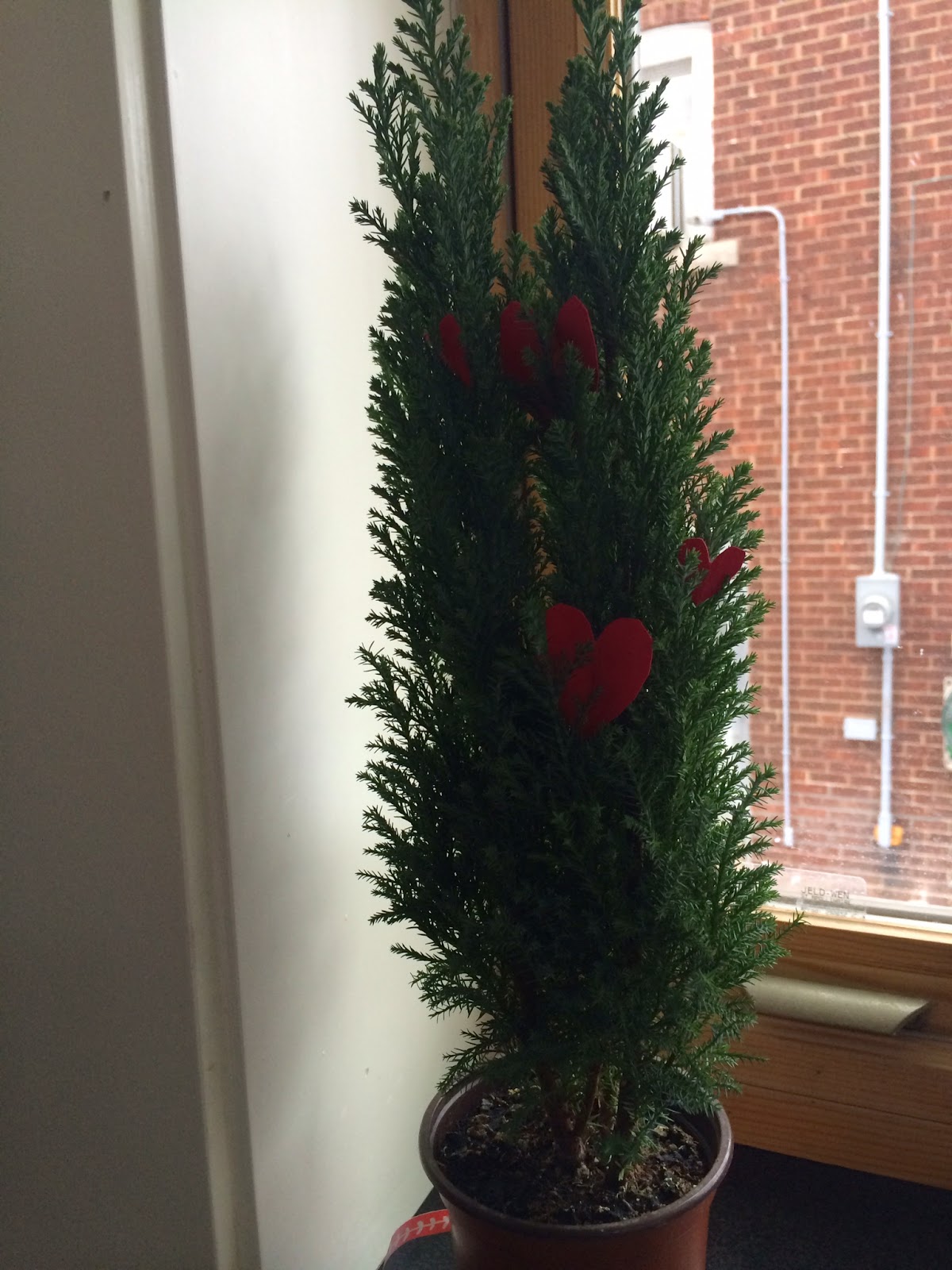 I put up a couple of hearts in the trees leftover from Christmas.  (Side note, can this actually be called a tree if it fits on our windowsill?) 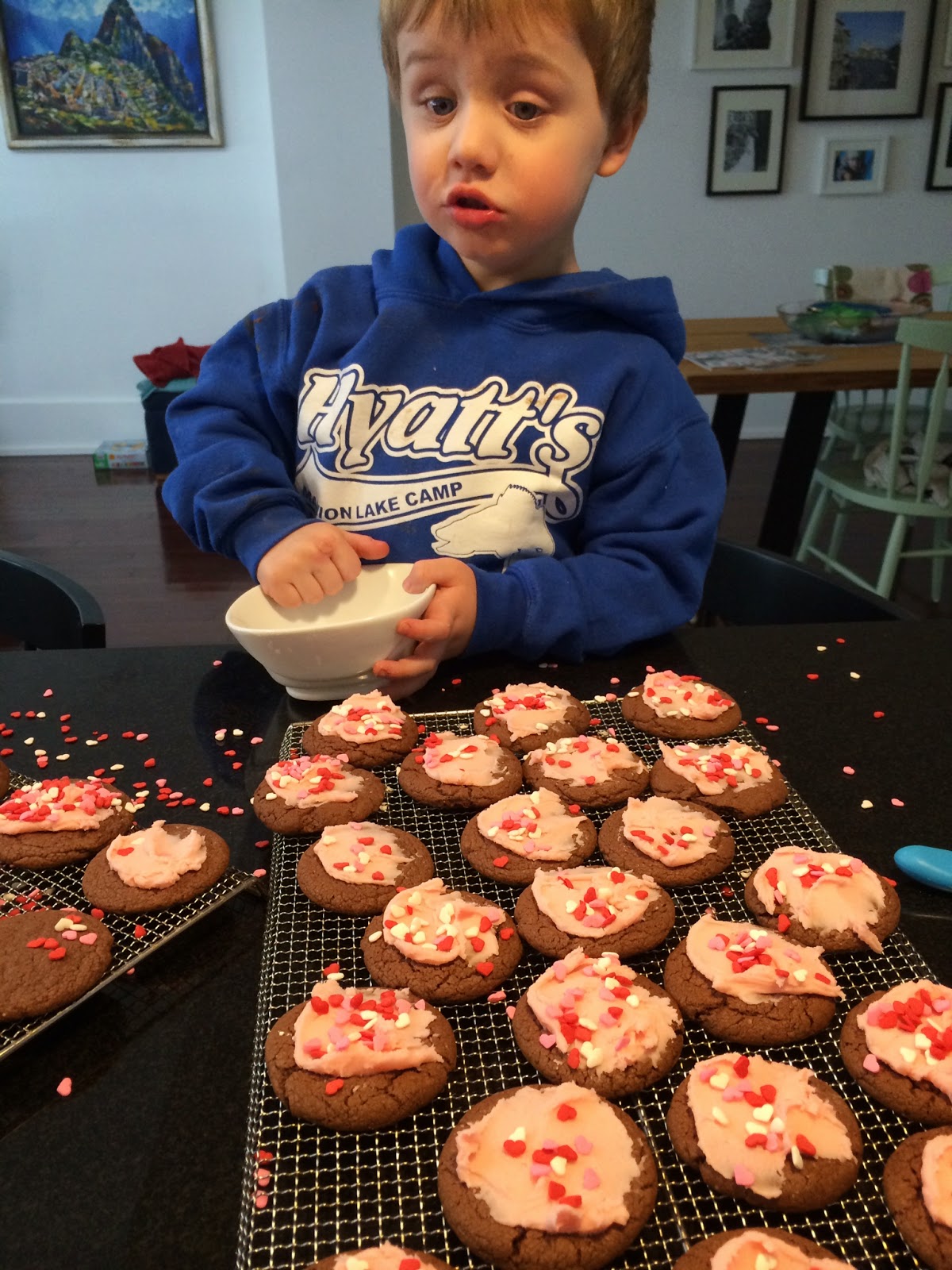 My little helper adding sprinkles to our Valentine's cookies. 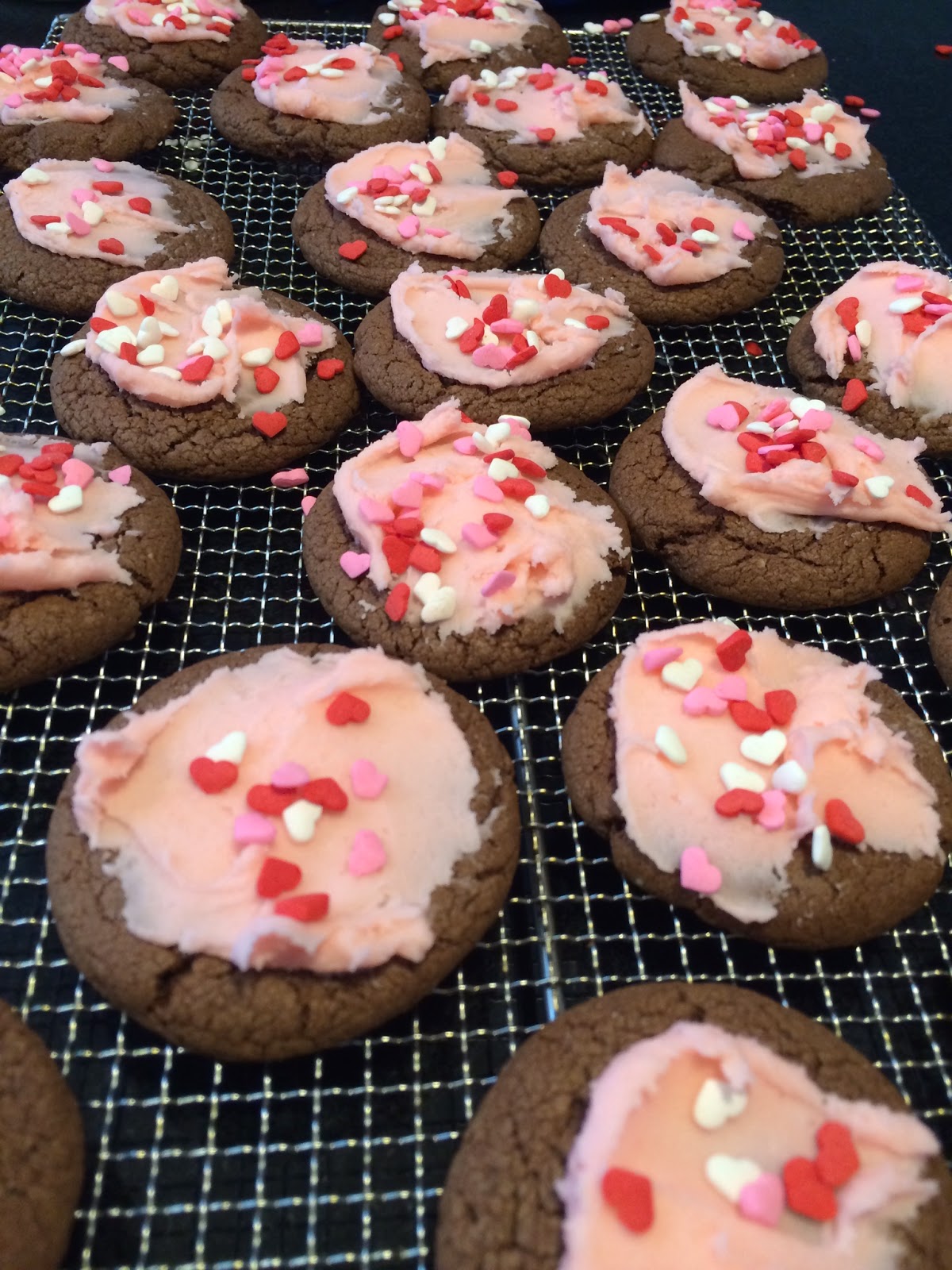 These cookies were ridiculously easy.  A box of cake mix, two eggs, and 1/3 vegetable oil.  Roll them into a ball, place on a baking sheet, press down with a rubber scraper. Baked at 375 degrees for 9 minutes.  Then top with icing.  I made my own and added some almond extract. They are so good, and they are already gone.

We invited some friends over for Saturday afternoon.  The kids played really well together (and by together, I mean separately but near each other) and we all went out to the backyard for some sledding.  They stayed for supper and we made some tacos, simple but yummy. When it was time to go, E helped his friend with her boots which was hilarious because it basically looked he was saying "okay, time to go, how can I help you get out of here faster?"  Then we said, he should help her with her coat, and he picked it up but instead of actually helping her, he just placed it on the floor in front of her so she could put it on.  I guess that is the daycare way of helping someone with their coat.  We laughed.

On Sunday, we went to church where E again volunteered to answer a question, but I didn't know what he was trying to say. 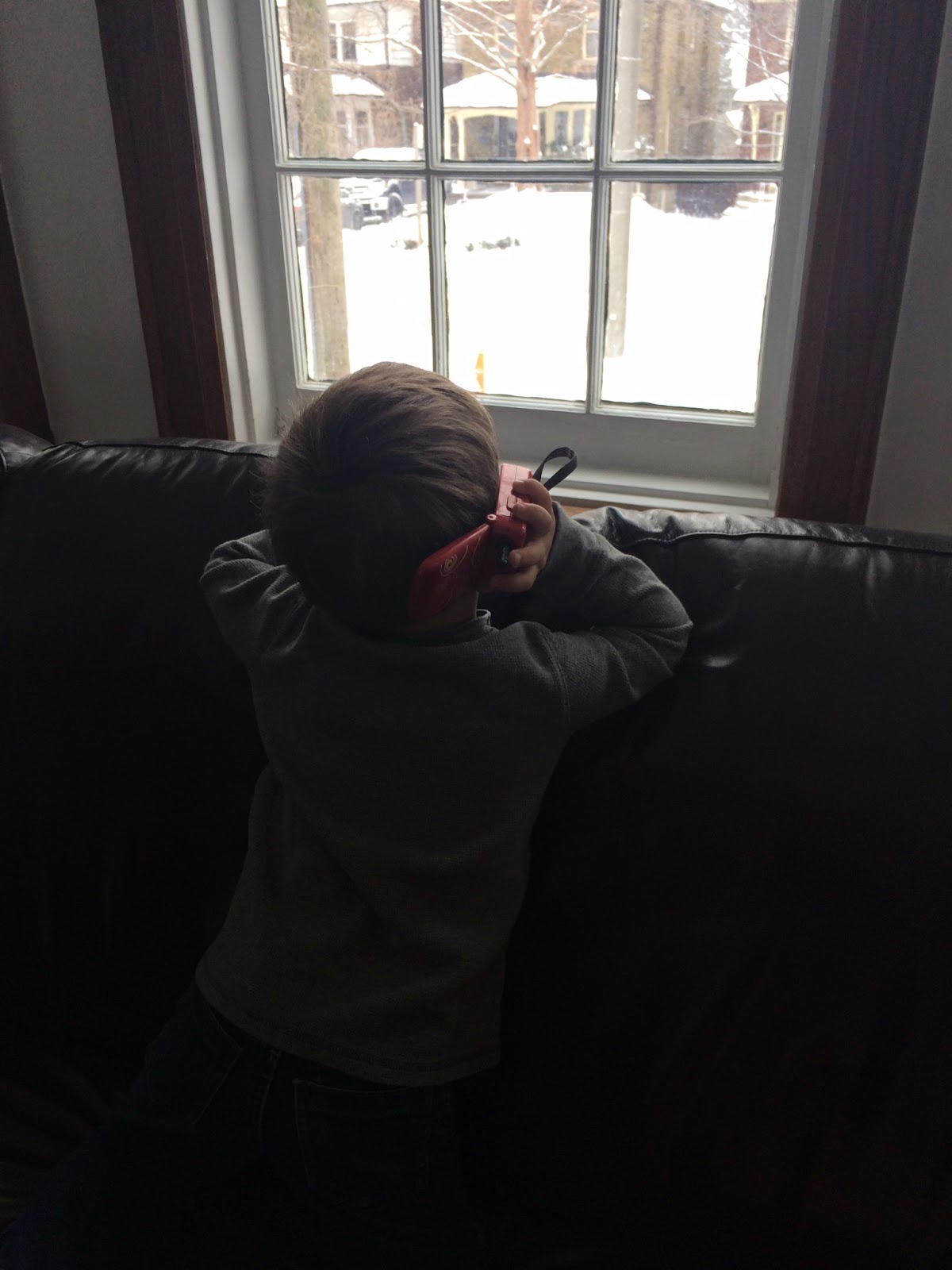 E talking on his cell phone, hilarious imaginary conversations.  We don't even talk on the phone that much so I don't know where he gets this from.

We went for a walk on Sunday afternoon down by the Humber River.  We pulled E on his sled and we saw some cross country skiers and some snowshoers.  Not sure if I want to invest in cross country skies now, but this would be a great place to use them.  Dave made a little fort for E in the front yard when we got back.  I told Dave it is probably illegal to make snow tunnel and snow forts now because they can collapse and suffocate children.  Then we reminisced about the snow forts we used to make as children.  Ironically (?) the roof of this fort did fall down before it was completed, but everyone got out safely. 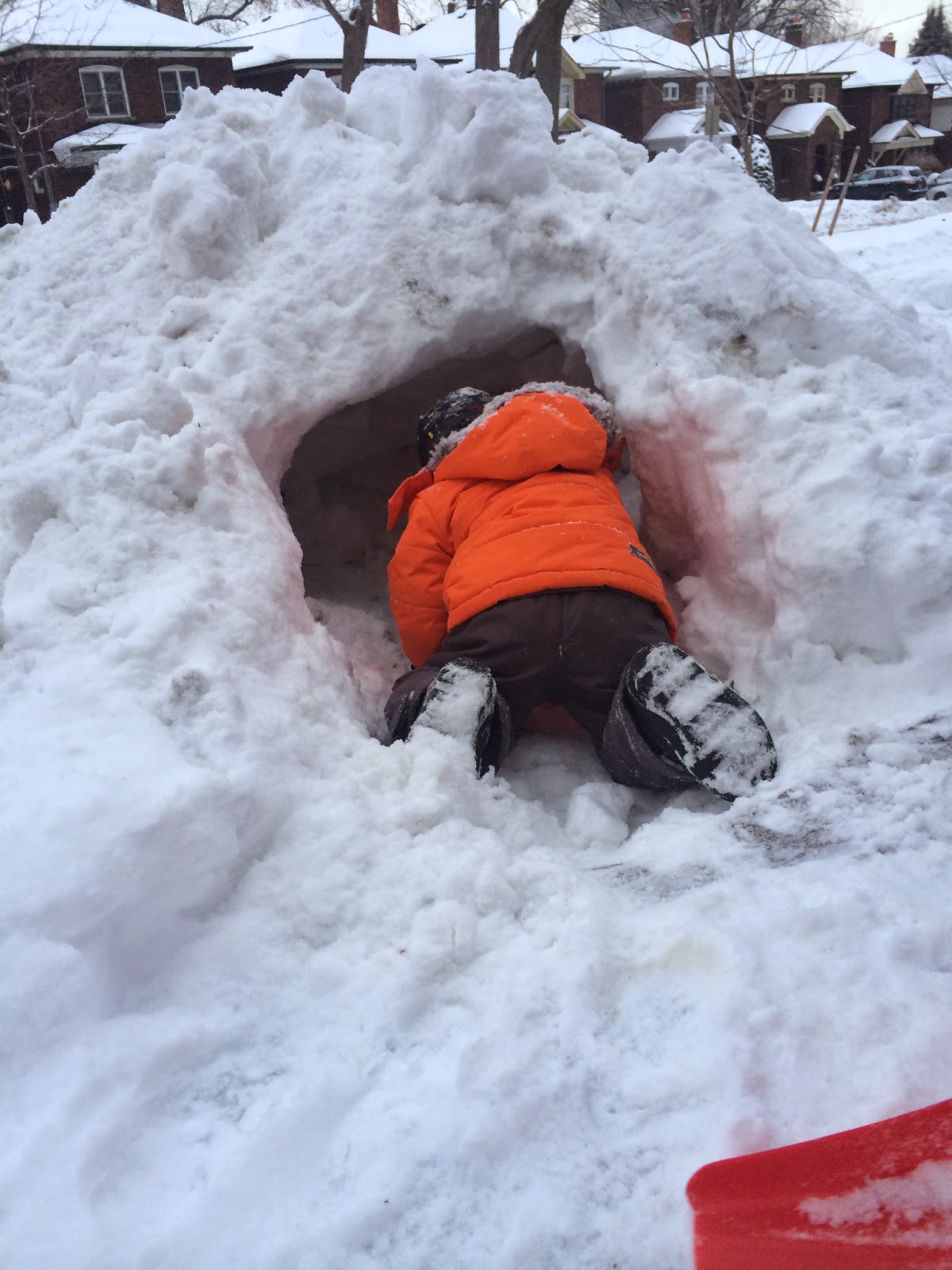 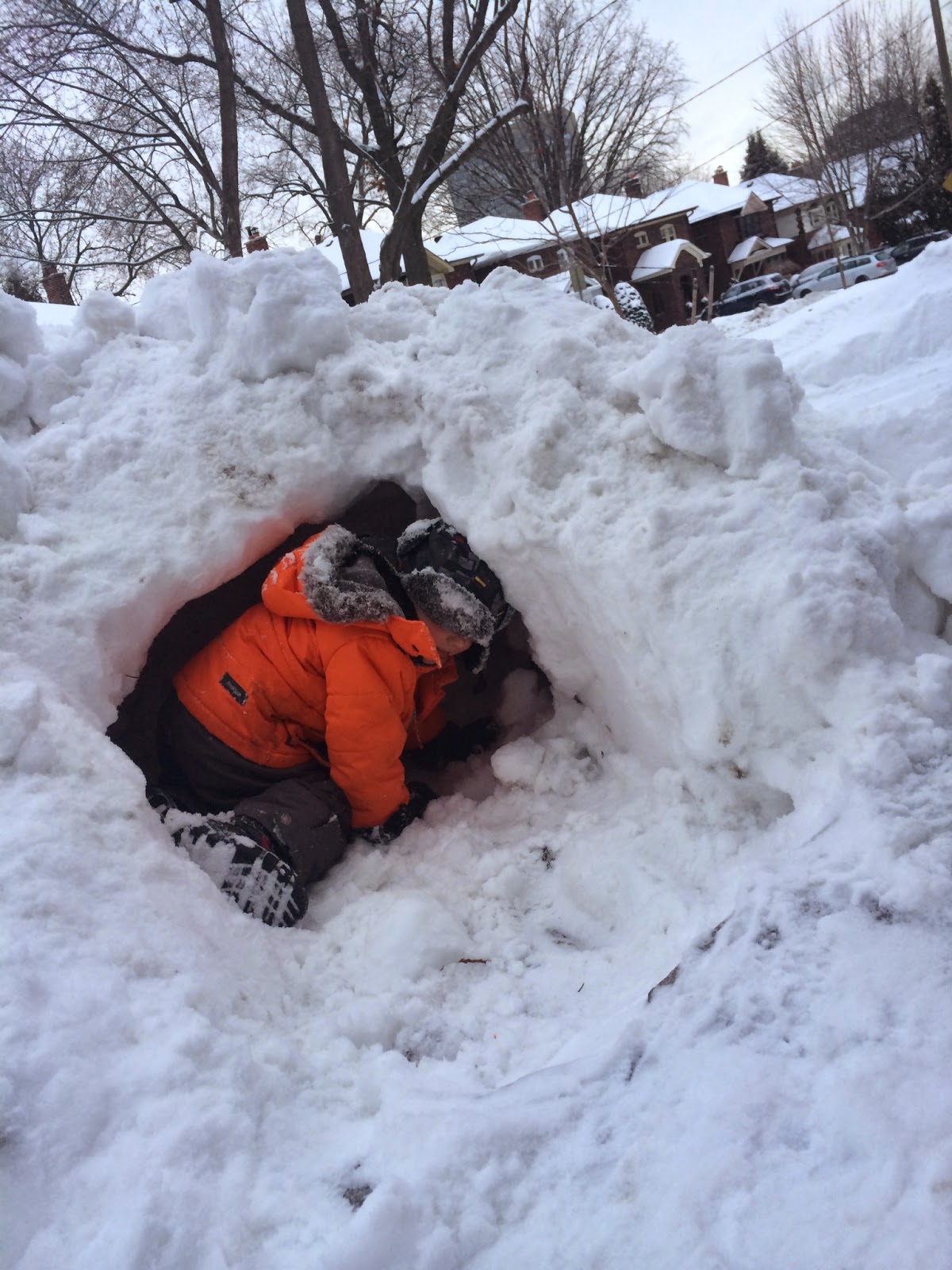 Next weekend is a long weekend in Ontario so we may try to do something different.