Our family left on Thursday so we were somewhat back to normal this weekend.  On Thursday after they left I tidied up the house and then our neighbours came over with their kids to play.  We were all looking for some entertainment for our kids and they enjoyed playing with E's new toys.  On Friday I went to the gym, took Q to get a shot at the doctor, and then went to the grocery store.  E was a big helper - he pushed the stroller at the doctor's office and pressed the button for the elevator.  He said "I can do it all, Mom", yes, you can buddy.

On Saturday Dave went for a run in the morning and then I did some errands down the street.  I had to return two books to Amazon and exchange some boots at Soft Moc.  I don't return a lot of things so I am always pleasantly surprised at how easy it can be.

In the afternoon we went bowling.  E has only gone bowling once at a birthday party, but he was younger and it was more a free for all with all of the kids rather than a structured game.  We chose the five pins with the small balls so he could easily throw the ball himself and it worked out well.  This was the type of bowling I grew up with, I did okay, but I know I can do better.  I tied Dave in the first game, but then he smoked me in the second and third games. 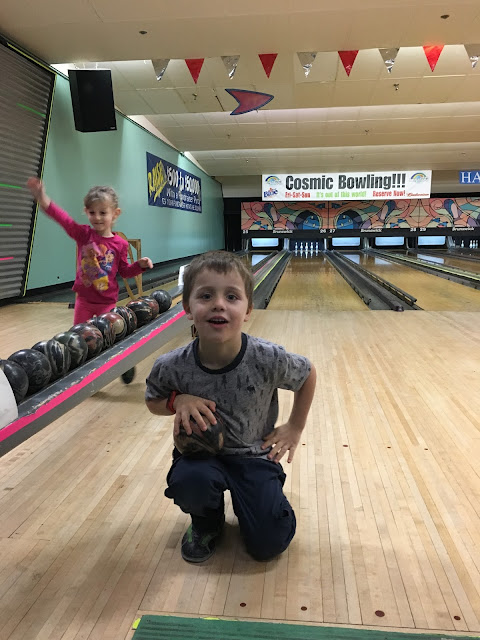 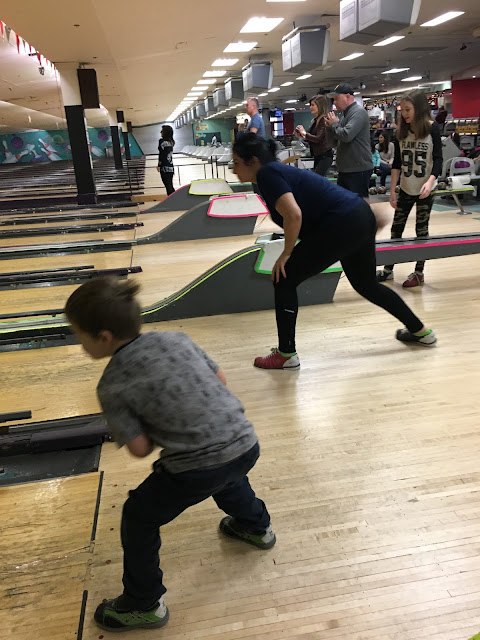 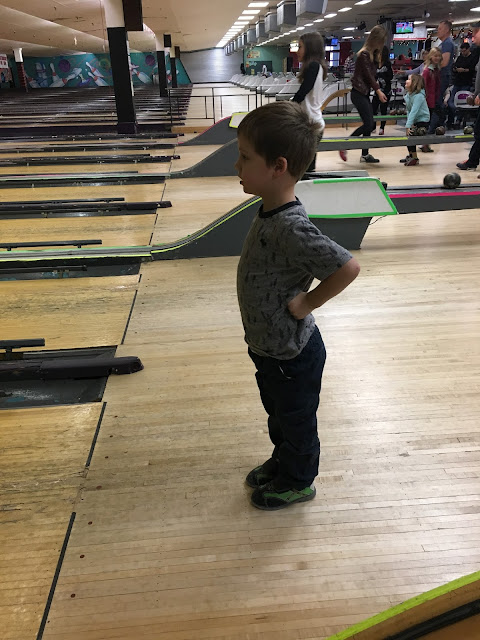 After we got back from bowling, it was time to get our New Year's Eve meal ready.  We had fondue with chicken, shrimp, meatballs, snow peas, peppers and mushrooms.  We do a beef broth for cooking, not oil, and this time I added some shallots, ginger, garlic, sherry and soy sauce to the broth.  I also made a peanut dipping sauce and we had thai chili sauce too.

We also made our own hats.  I found some printables for new year's hats and we coloured our own (Dave outsourced his hat to E to colour). 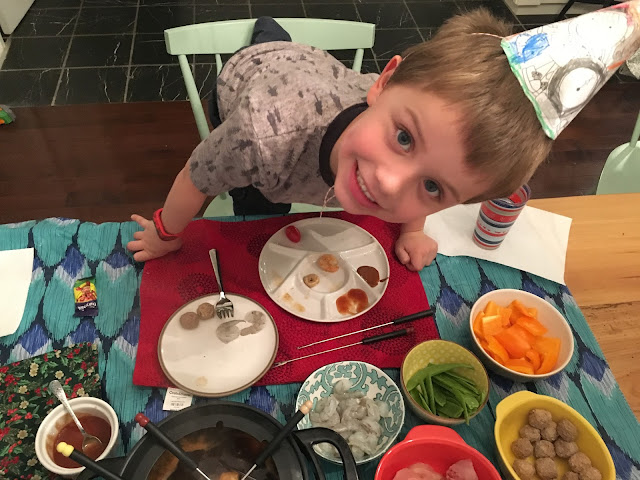 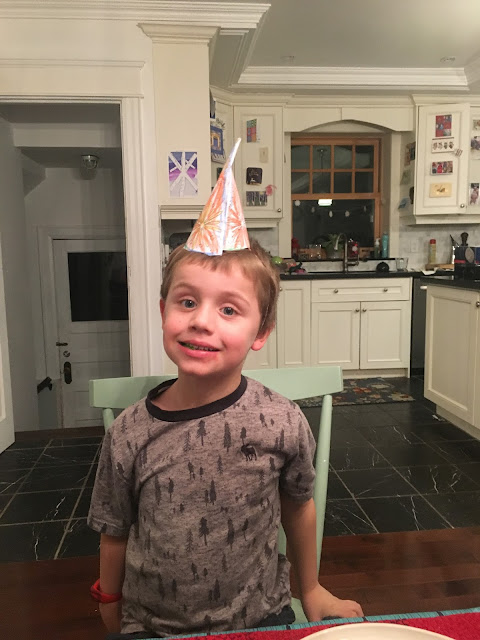 Fishing around for a lost mushroom 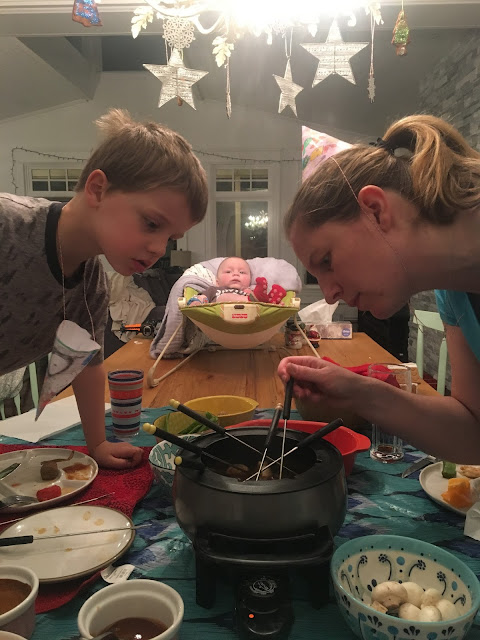 After dinner, we watched a few movies and we let E stay up as long as he wanted.  He made it to midnight, and so did I (although I did snooze for about 15 minutes during one of the movies). It was a  quiet night but we enjoyed it.

On Sunday I made latkes for breakfast. When I had asked E what he wanted to do for New Year's Eve he said he wanted to celebrate Hanukkah (one of his classmate's dads had come in to the class to talk about Hanukkah and he was very interested) so I thought I would try latkes and they turned out really well.  I mean it's potatoes fried in oil, you can't go wrong.  I know they are traditionally eaten with sour cream or applesauce but we only had ketchup (#hanukkahfail). Next time I want the sour cream!

Then we went for a walk by the Humber River, it was a beautiful day. 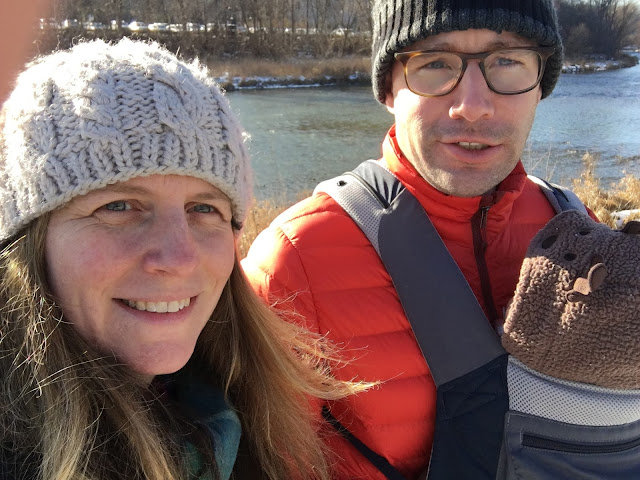 It was very icy and muddy, and E managed to get extremely wet and dirty but since the temperature was pretty warm, he was fine. 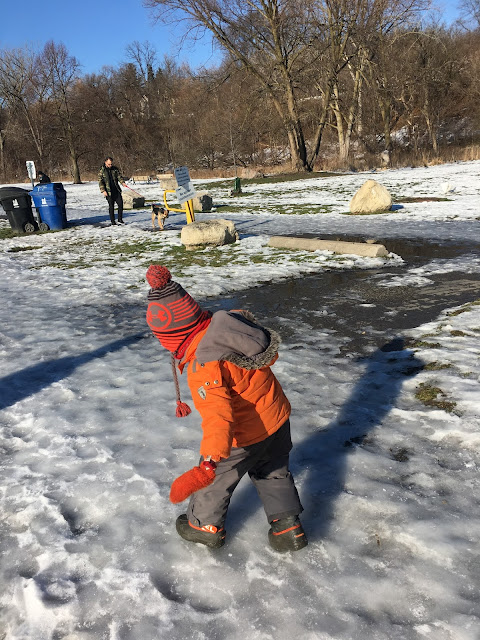 As usual the photo never does the sky colour justice. 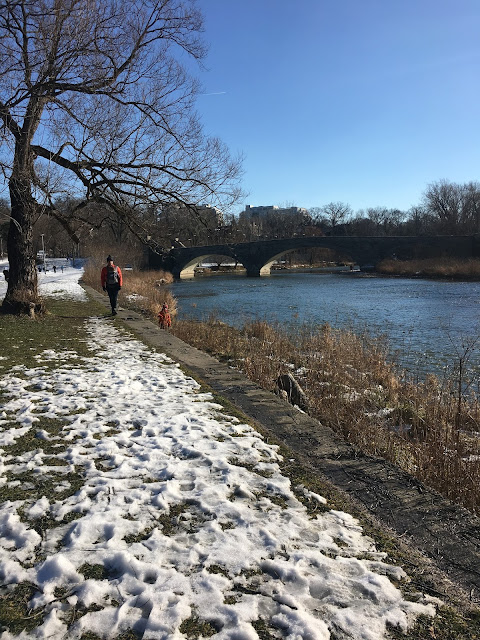 After our walk, Dave took E to see Rogue One.  I organized E's book shelf and then got dinner ready. In the evening we watched the very strange movie The Lobster.  Colin Farrell is nominated for a Golden Globe for this role.