We had a fun weekend celebrating Father's Day. Q and I started our Friday morning with a workout in the park.  Instead of running there, we took the subway and then walked home and did some errands along the way.  In the evening, Dave and I went to a party for the parents of E's class.  We know some of the parents but this was a good opportunity to meet more and actually talk to them. 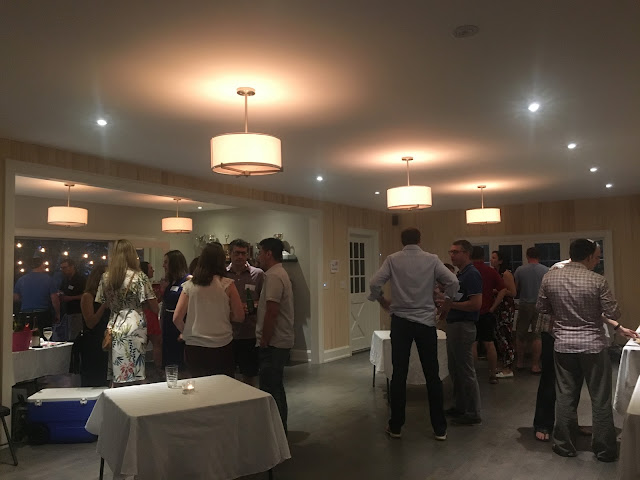 On Saturday morning we were up early, as usual.  I had my breakfast in the backyard and enjoyed the warm morning. 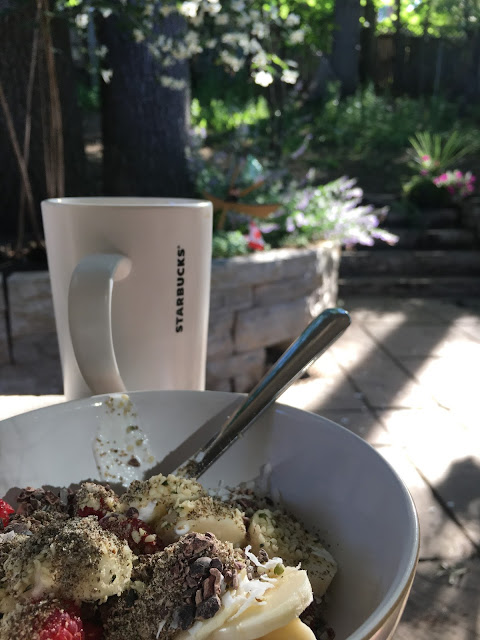 I peaked in to see what E and Q were up to.  Big smiles for big brother. 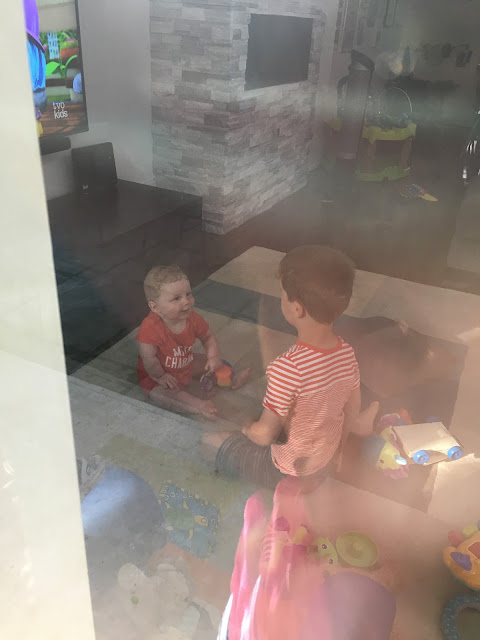 I went up the street while Q was napping and picked up a few things including a couple of cinnamon buns for Father's Day but we ate them on Saturday when they were fresh rather than waiting until Sunday morning, no one complained.

After Q's nap we went to the library to sign E up for the TD Summer Reading Club.  E's class had visited the library on Friday so he was excited to go back on Saturday morning to sign up.  They had crafts and a scavenger hunt too.  Hopefully this will be more motivation to learn to read. 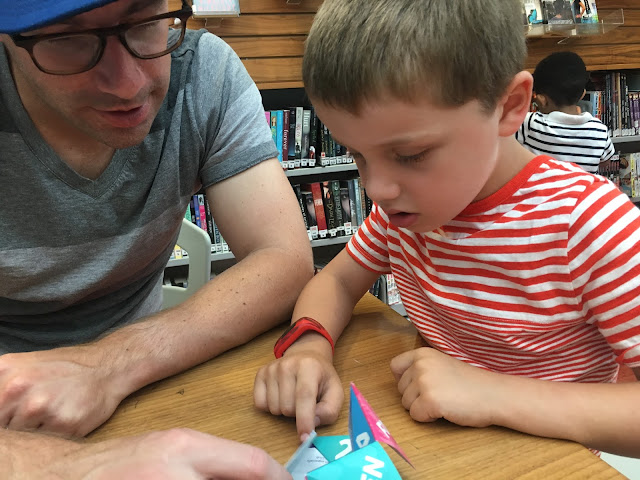 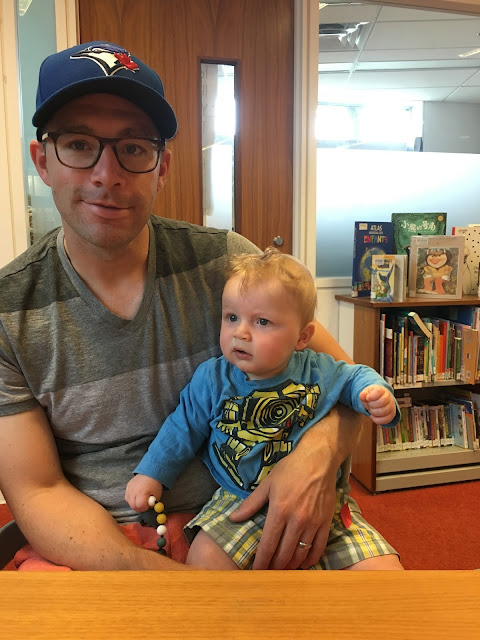 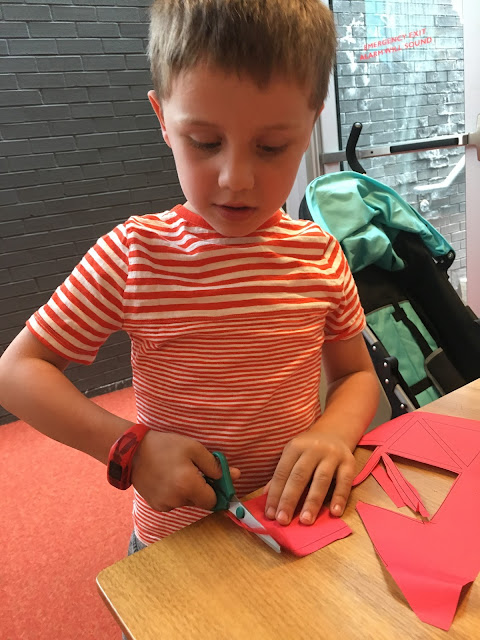 This is a maple leaf in the style of a quilt square. 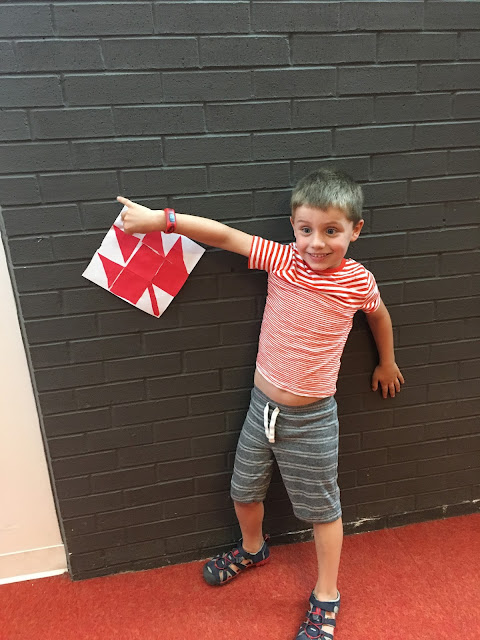 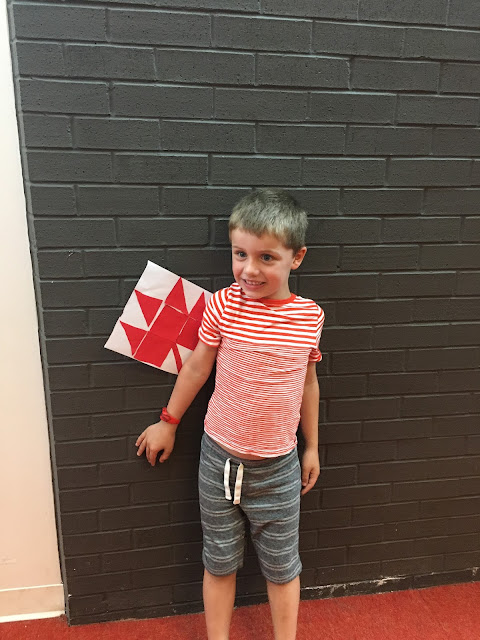 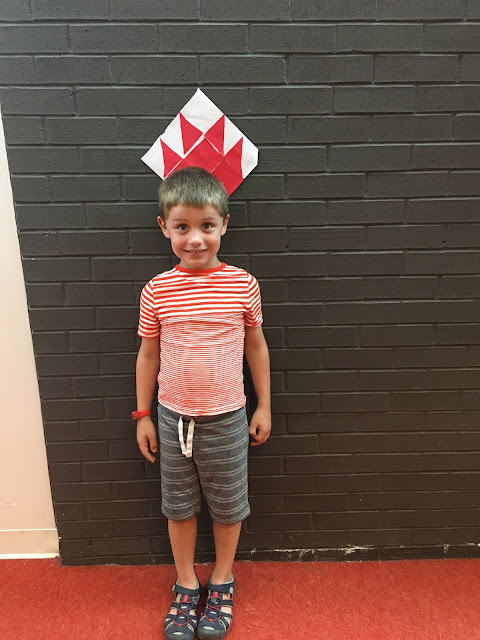 After lunch E and Dave went to see Cars 3 and I stayed home with Q.  We had an easy supper on the BBQ and then went for a walk by the river and threw the baseball around. 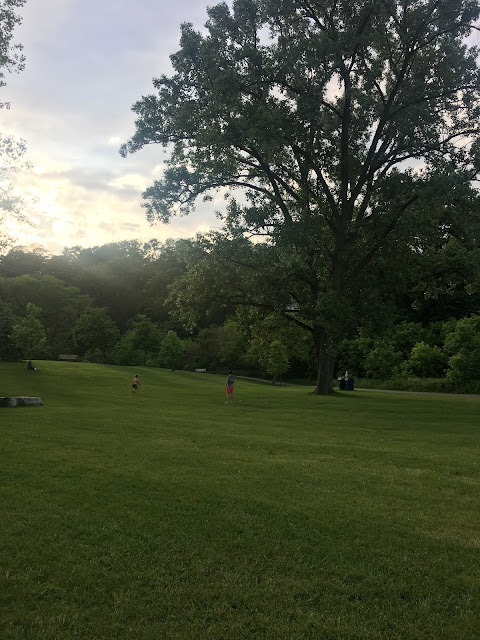 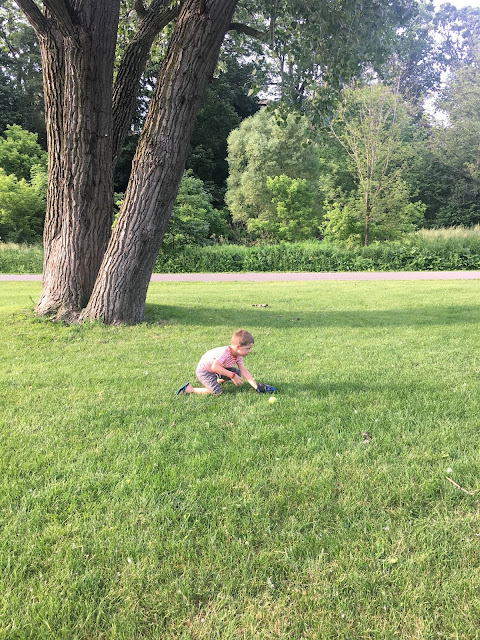 Another early morning on Sunday.  Dave went for a long run and opened his presents when he got home. 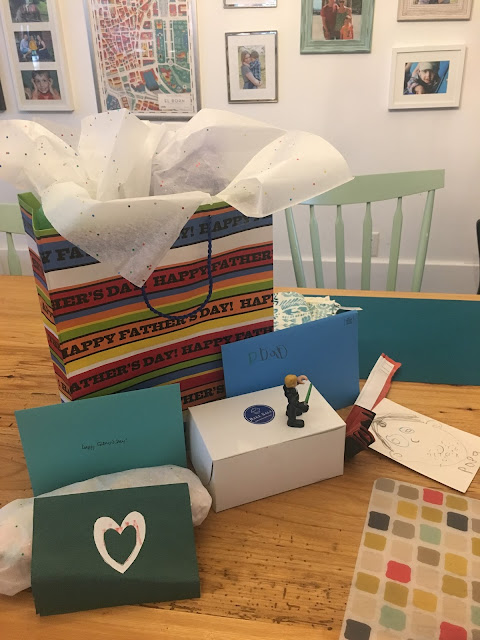 Some candy, a bottle of scotch, a nice bottle of red wine, and these yummy cookies from Bake Sale. 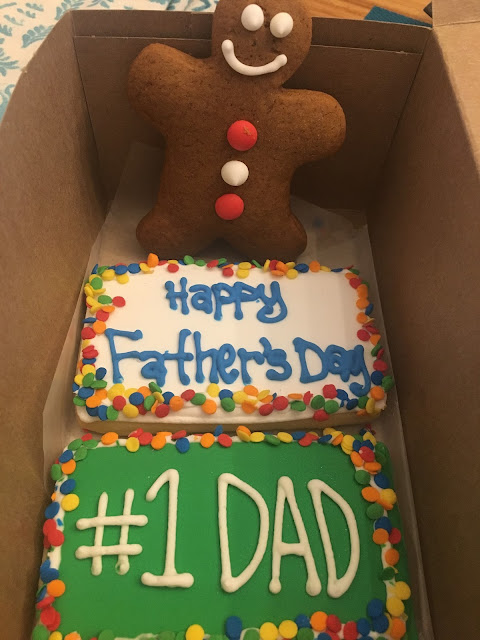 Then we set out on a little Father's Day adventure.  We took the subway to Dundas West Station, walked along the Rail Path, and stopped in at Henderson Brewing Company.  They don't usually have food but they had some BBQ'd hot dogs for dads (and others) on this day.  We had a couple of drinks, played a few rounds of pinball, and enjoyed the atmosphere.  There were a lot of families doing the same thing as us and it was fun. 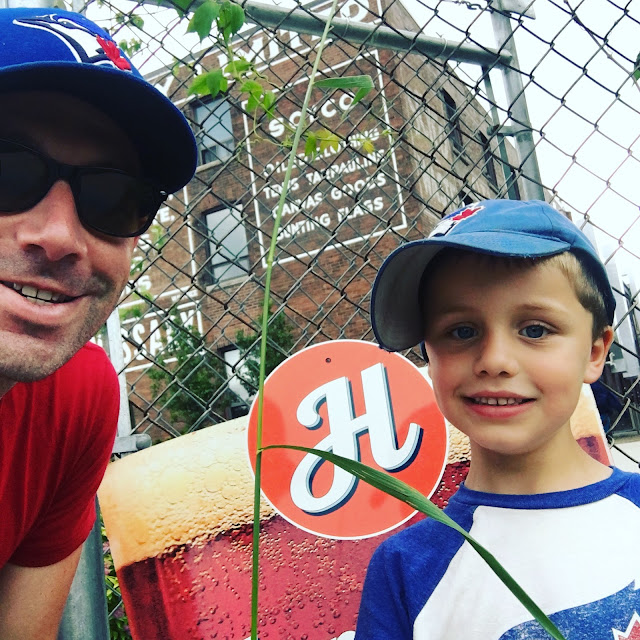 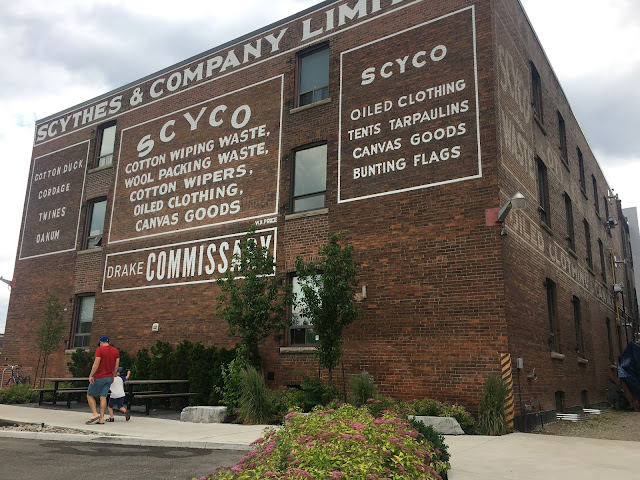 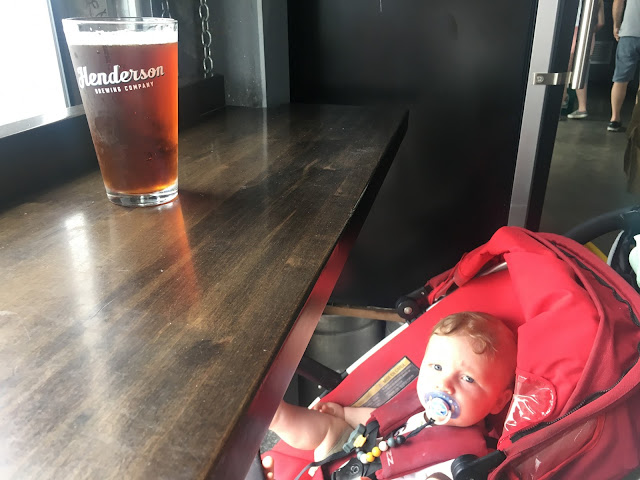 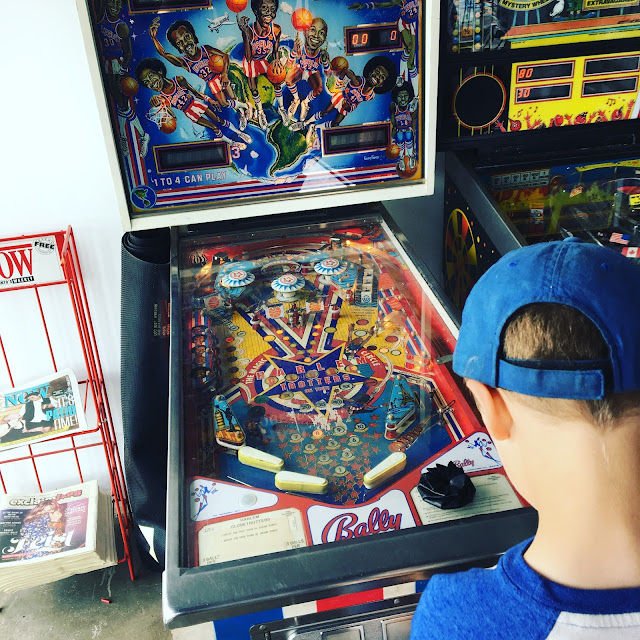 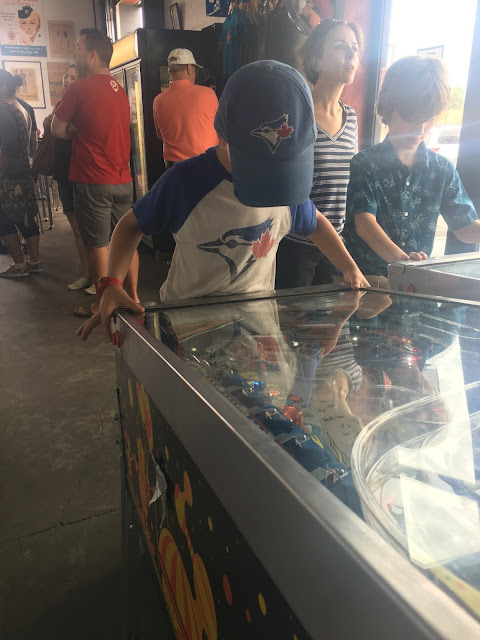 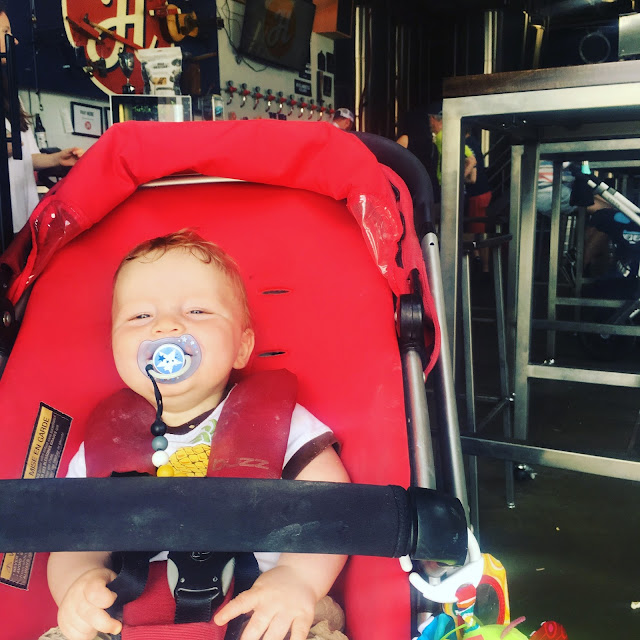 The Drake Commissary is right next store so we stopped in there for a minute.  I had thought it was like a store, and although they do sell some artisanal food and condiments, they are mostly an eat in/take out place.  We didn't stay but I think it will be a destination another time. 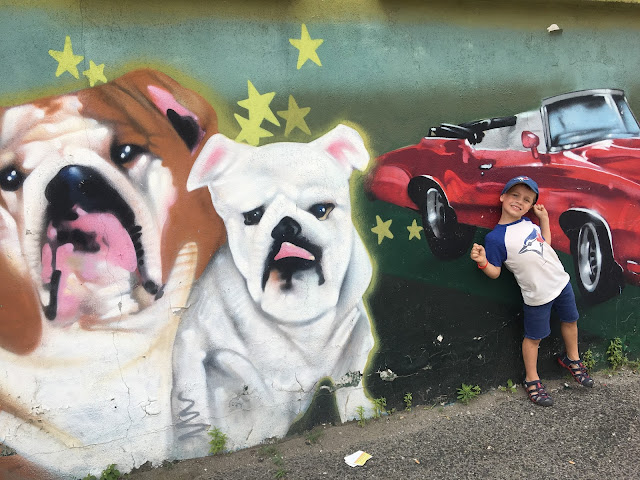 We continued our walk to Bandit Brewery to sit on the patio and get something to eat.  Dave made this makeshift tic tac toe board with the pebbles. 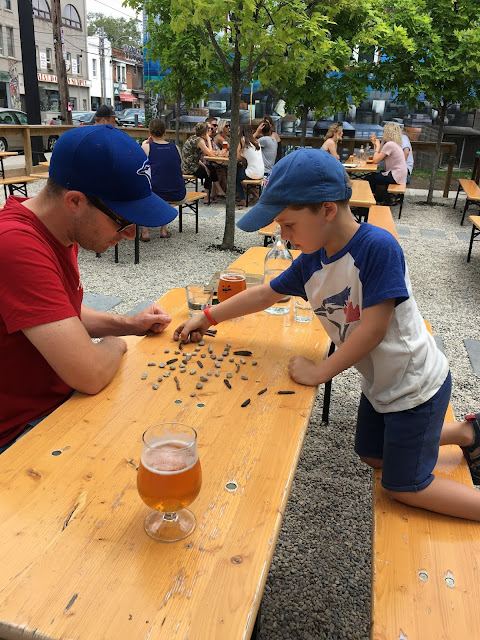 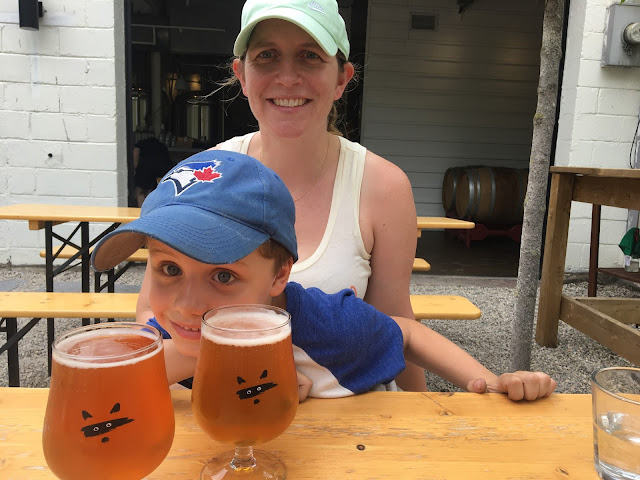 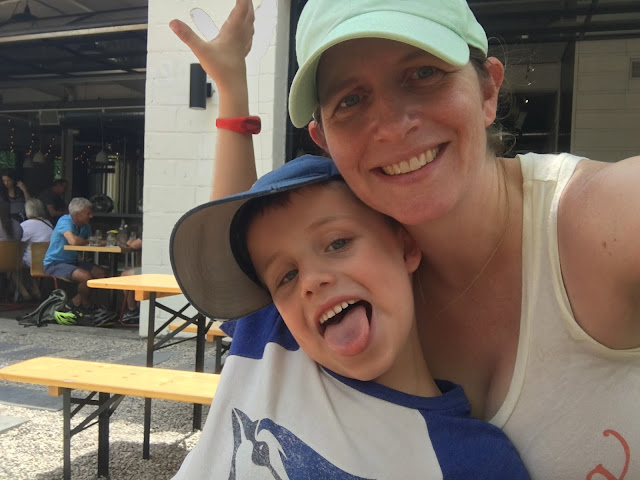 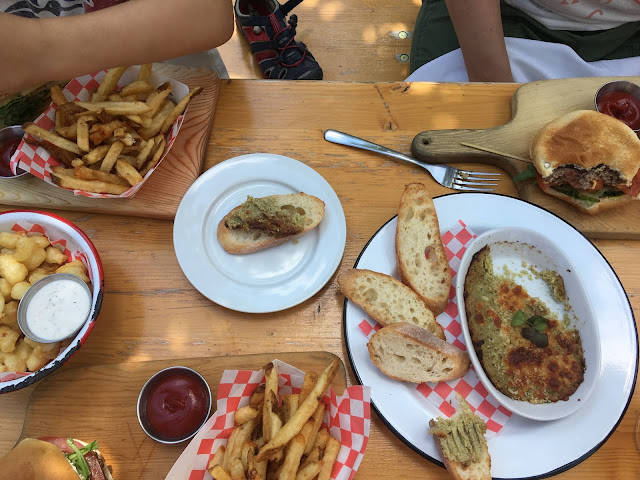 Q wasn't as happy at this place.  He'd napped a bit on our way from Henderson and then woke up and didn't go back to sleep. It was hot too, even in the shade.  He hung in there though. 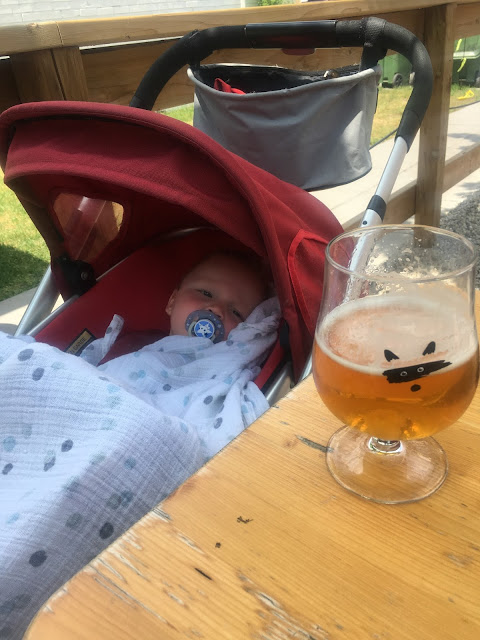 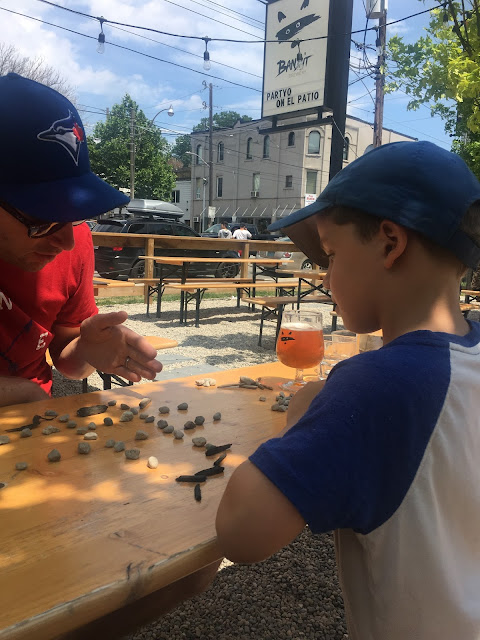 Then we walked back to Dundas West Station and went home.  Since we had snacked and drank beer all afternoon we decided not to make the big Father's Day dinner I had planned.  So steaks, mushrooms, red potatoes, green beans, and red wine were on the menu for Monday night instead!