Three things that are going on with us at the moment: 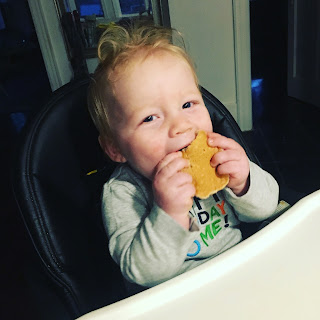 1. Q is getting a bit more stable on his feet and although he can stand alone for a split second, he is a little ways away from walking.

2. We have all of E's old clothes of course, so now Q is wearing those outfits again.  They are clothes from five years ago and I see such a difference between them and clothes they sell now.  The ones now are more colourful, even for boys.

3. We celebrated his birthday on the weekend (photos to follow tomorrow); he ate his piece of cake like he'd been eating cake his whole life. 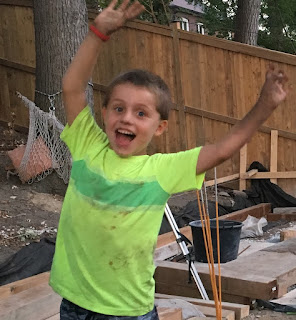 1.  E has been doing up his shoes in a different way since he started school, I guess this is the new style.  He does up the velcro strap behind the tongue.

2. He got poison ivy when we were camping but it didn't show up for a couple of weeks later so we didn't know what it was.  At first we thought it was just some bug bites but it wasn't going away.  So we took him to the nurse practitioner and got some cream and it cleared right up.  She also recommended some kids' Claritin to help with the itching and that was good too.

3.  E's birthday is this month and he has big plans.  We need to lock these plans down soon so we can send out some invitations.  We'll just have the party here like we usually do, but the various activities and guests that E has in mind may need to be reduced.

Dave
1.  Dave's summer beard has made its way into fall.  I wasn't sure about it at first, but I like it now. When I see pictures of him without it, it's like, "who's that?".

2.  Now that I'm back at work full time, Dave is back to his usual routine of going up the street to buy ingredients and getting our supper ready.

3.  Dave is working his way through Breaking Bad again on Netflix.

Me
1.  I finally got a haircut on Friday.  I think it had been six months since my last cut, which is too long, but I had found it hard to find the time.

2. Our office is having its annual client appreciation event this week.  Even with the force networking (haha) the food and wine is always a treat!

3.  I listened to Kailyn Bristowe's podcast where the guest was a medium.  She told Shawn and Kaitlyn a bunch of things about their deceased family members and it seemed very real.  I just don't know if I believe in these mediums, but maybe it's possible, I don't know!!