My Friday included a quick trip to the LCBO, mask in tact. 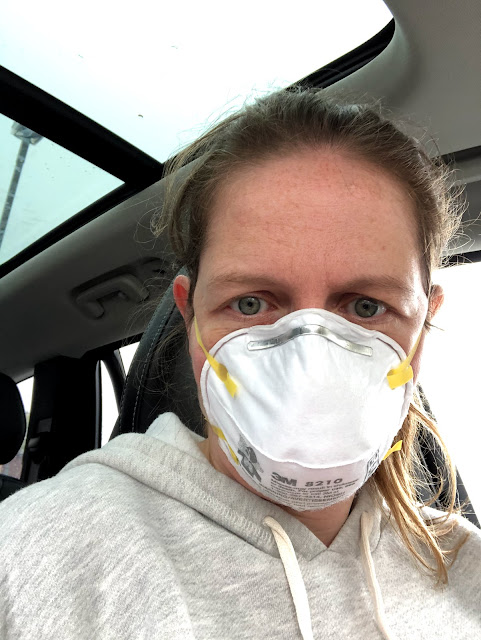 Then after work, I took Q for a run.  He is heavy!  We made it all the way to the (Winnie the) Pooh stick bridge, as per his request, but he was asleep! 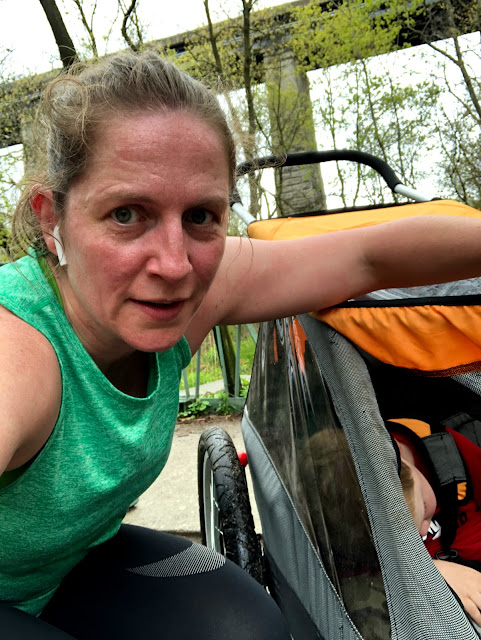 Pizza and movie night after that.  We watched Sonic the Hedgehog again.

Saturday was supposed to be our only nice day so after our pancake breakfast, we went right outside to do some yard work.  We have to get two of our big oak trees cut down in the next week or so, so I moved the plant and the small tree that was underneath them.  It took me all morning, but it was a success. Hopefully the stay alive, but at least they have a chance now. 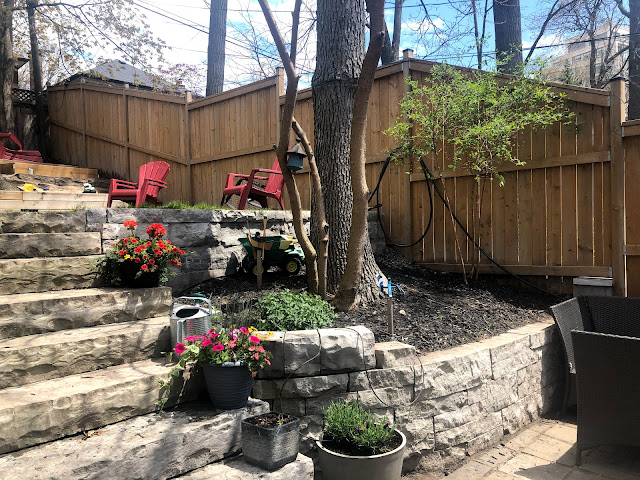 Meanwhile the kids played around and Dave worked on the back porch posts. 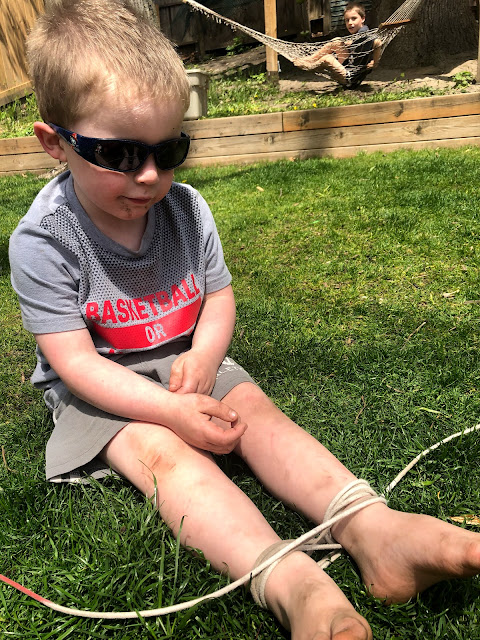 After lunch I started to mow the lawn, but E asked to do it instead. 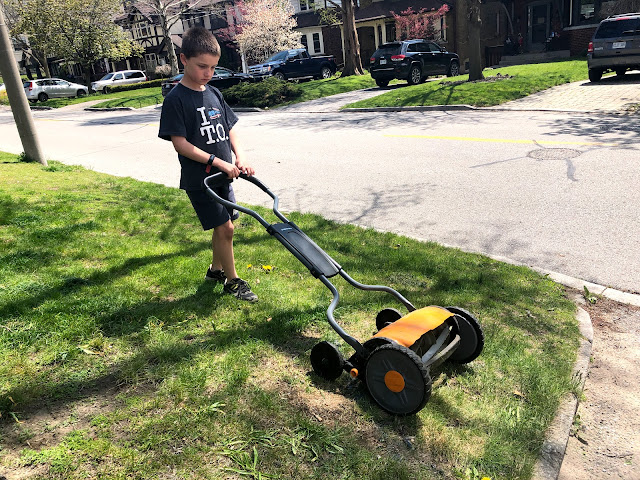 For supper we had burgers and French fries.  I picked up this salt in San Francisco and we like to put it on our fries. 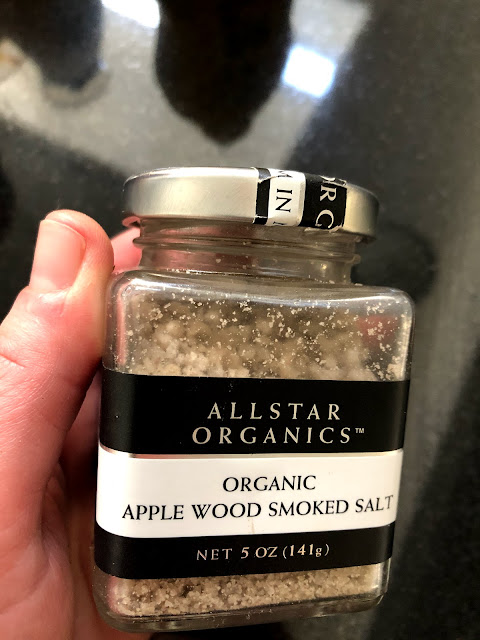 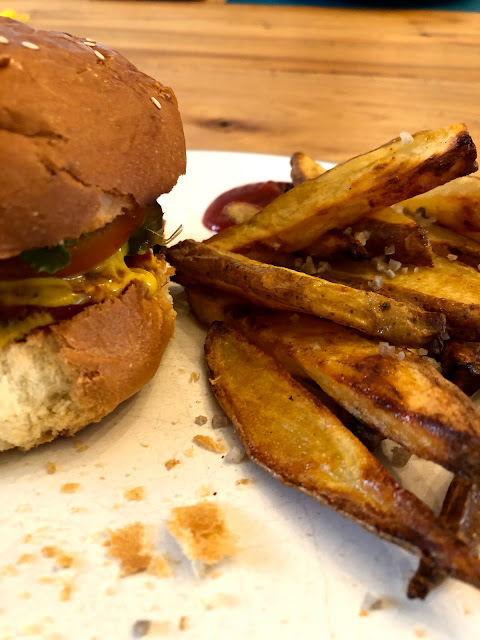 On Sunday morning we knew the rain wasn't supposed to start until mid-afternoon so we hurried down to the Lakeshore to ride our bikes, the city had closed down the East bound lanes for the weekend so people would be able to run, bike, and walk on the waterfront and stay spread out.  It was fun! 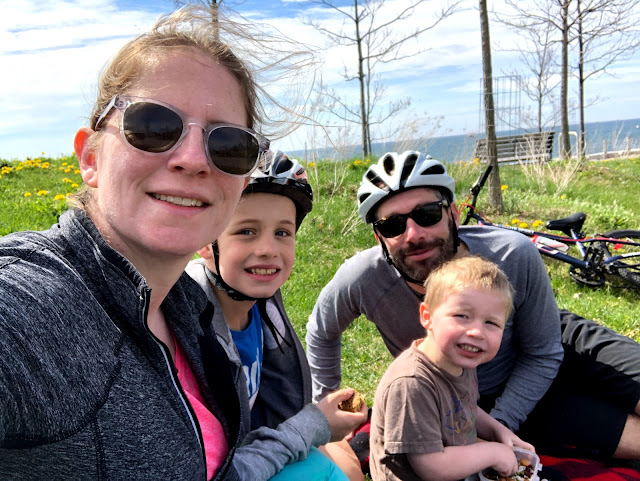 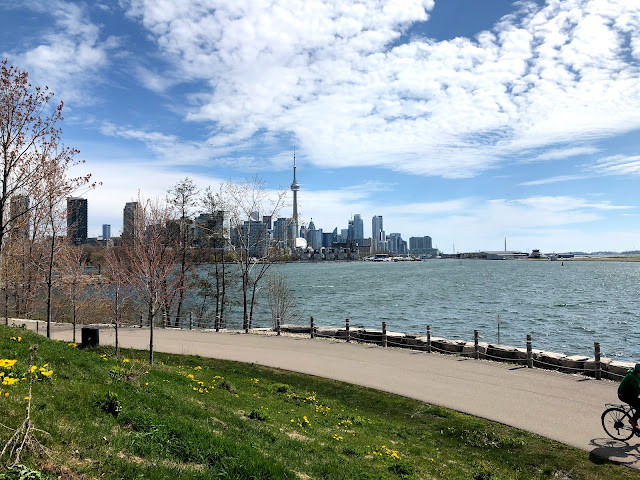 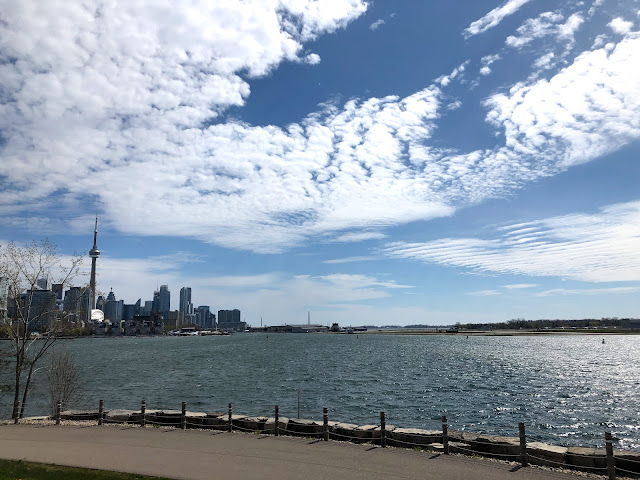 A little chilly when we stopped for our snack and Q didn't have a sweatshirt since he had been snuggled into a blanket in the bike stroller. 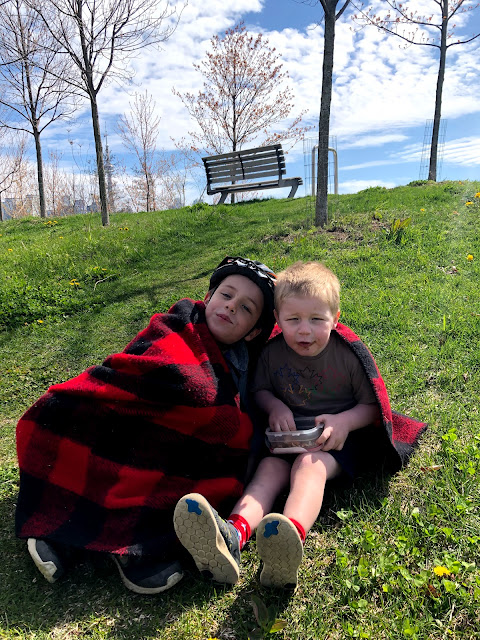 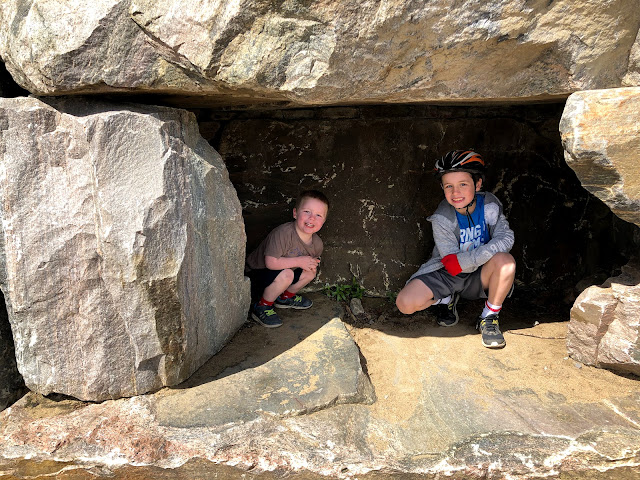 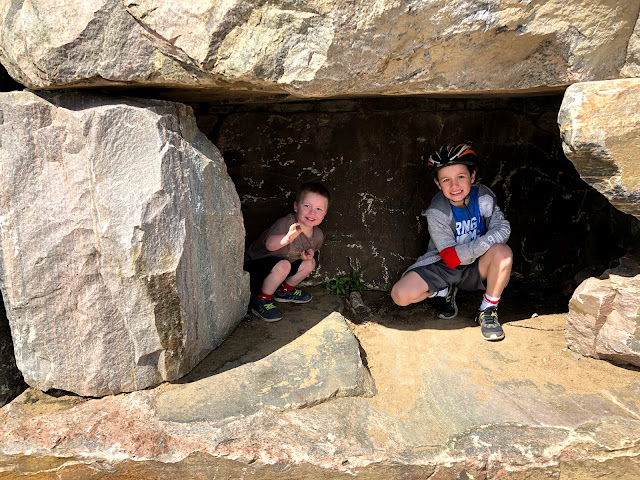 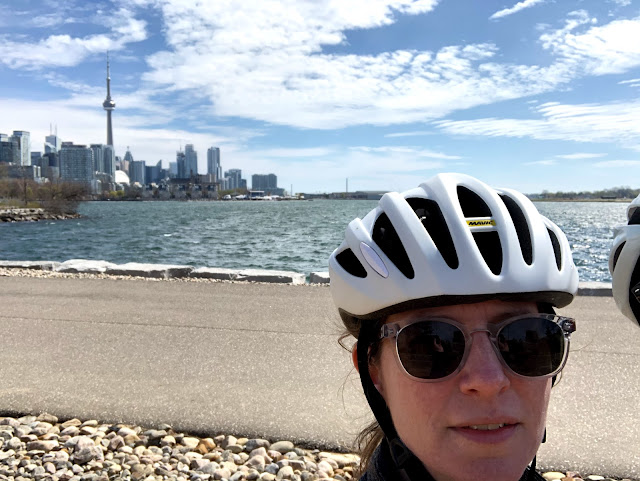 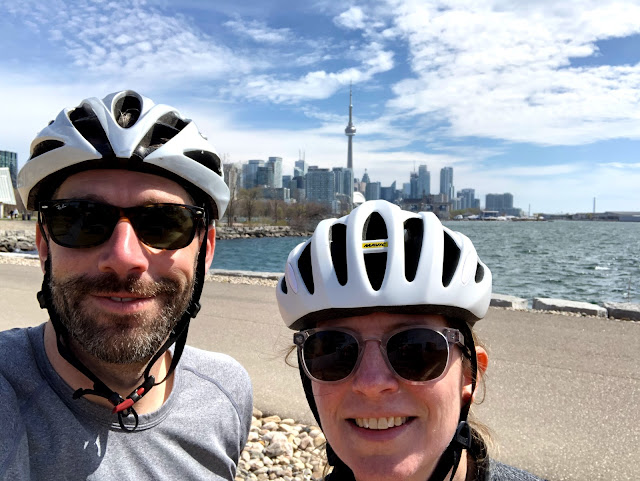 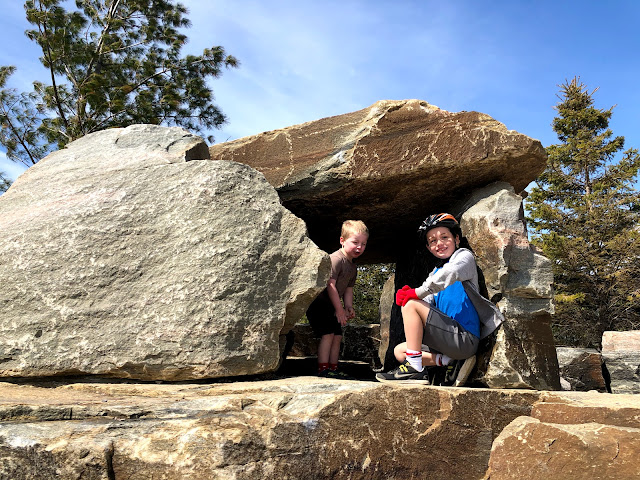 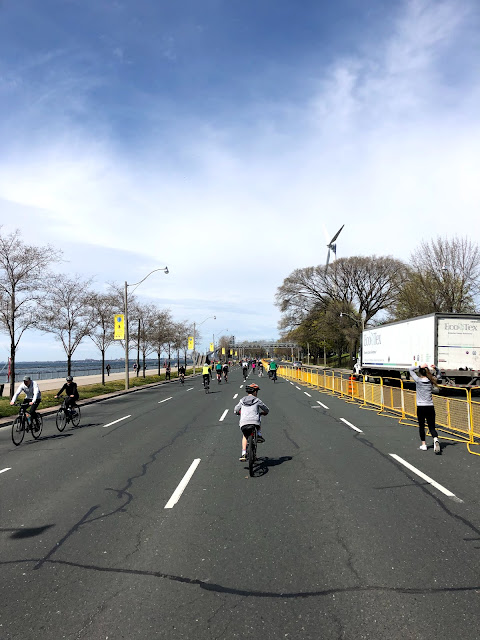 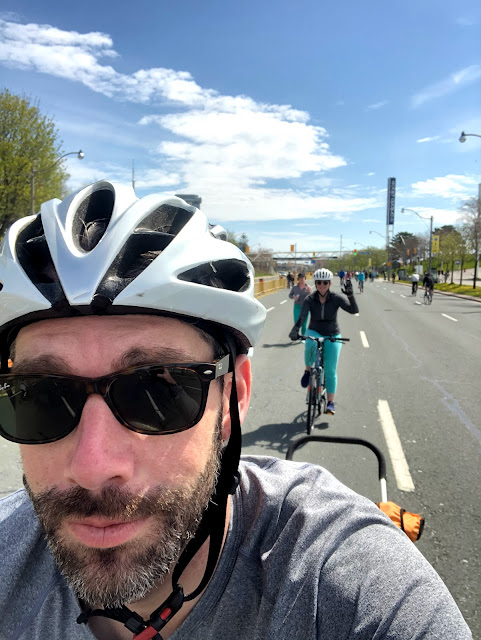 It was supposed to start raining in the afternoon so we had decided to watch Trolls World Tour and make popcorn. It seemed weird to do it even though the weather was still nice, but we did it anyway.  Well, the kids did, while Dave continued his work outside and I cleaned the bathrooms and made banana bread.

Some cards before supper. 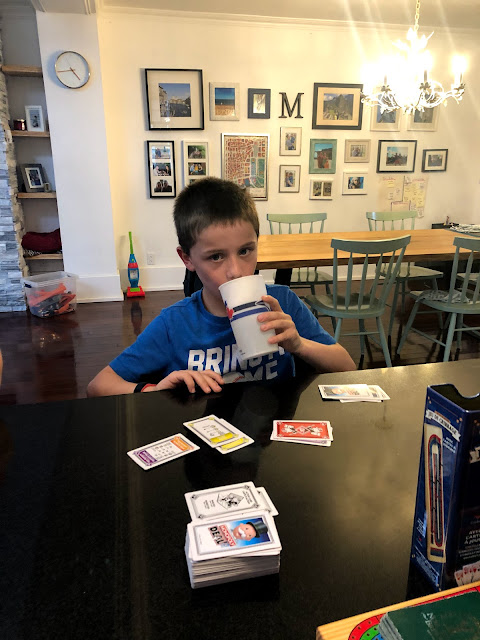 Then another movie downstairs, this time Scoob, the new Scooby Doo movie.  It was actually pretty cute. 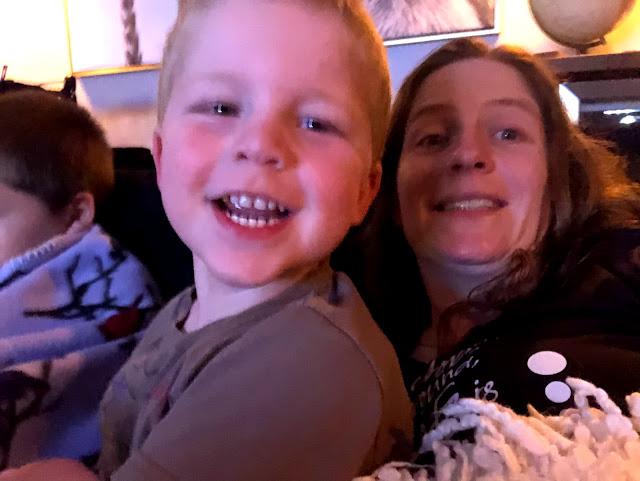 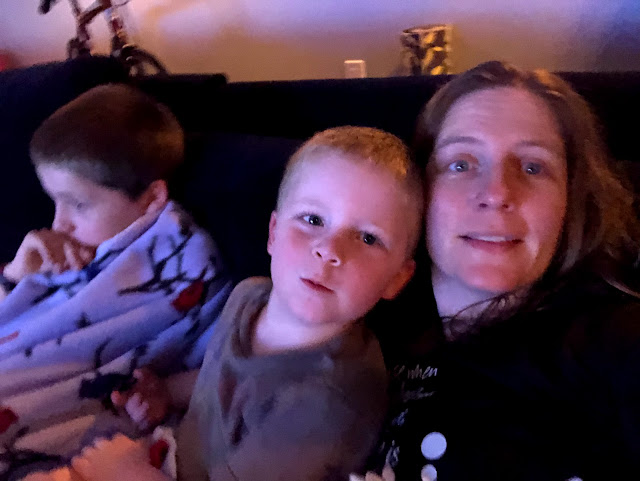 It was nice to have a holiday on Monday although I actually ended of working for most of the day.  One of our neighbours organized bingo for all of the kids via Zoom.  E loved it and won a few times. 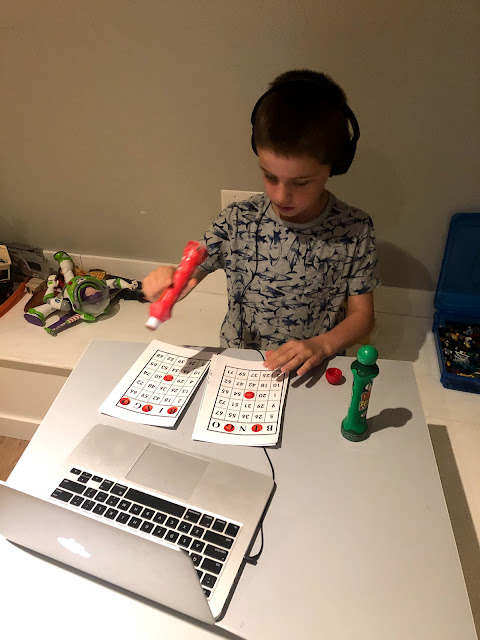 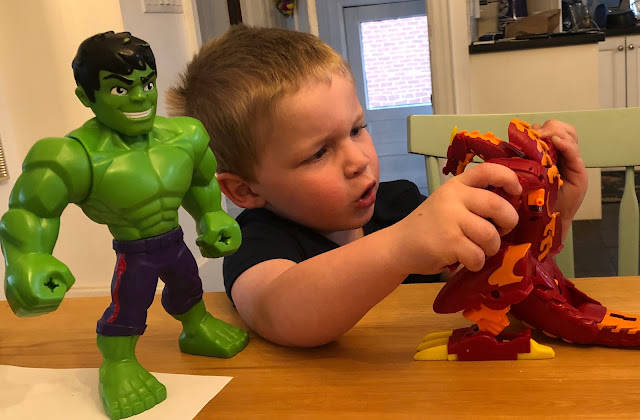 I took Q for a drive in the afternoon and he fell asleep almost immediately.  And meanwhile Dave made some foccacia bread.  It's addictive! 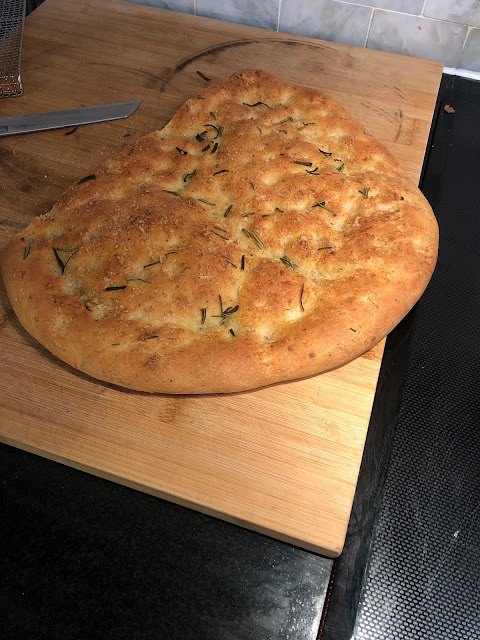 We ordered our supper from The Friendly Thai, with enough leftovers for the next night.