Last October when Canada held its Federal election (remember that? it was so long ago) I wrote a letter to Peter Mansbridge's podcast (which he read on the show), and I'll copy it here since it sort of mirrors what is going on the United States.  (A little background, Peter had said that typically Canadian elections come down to one single question and that is what people cast their vote for (or against), with the rest of the issues sort of fading into the background.) 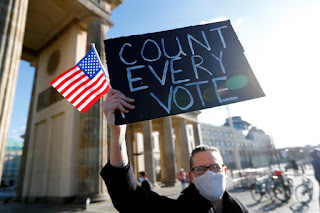 My question ties together two themes you touched on this week - the ballot question and how Canadians feel about our identity/image.  If the ballot question will be "Do you like Justin Trudeau as Prime Minister?" and the answer ends up being "No, we're tired of him, let's go with Andrew Scheer?", how can that then be reconciled with an image of Canada being an open and welcoming society, progressive in its views on climate change, feminism, and so on, if our PM will then be pro-life and climate indifferent?  Perhaps if Scheer is elected, then my view of what Canada thinks of itself is wrong, but I have to believe that the majority of people would like a leader that looks to the future rather than one trying to backtrack to the "good old days".  Or would his election actually force us to look at ourselves in the mirror, rather than just patting ourselves on the back if Trudeau wins again, and ignoring some fairly significant flaws in our national fabric (you know the ones).

So at the end of the day, Trudeau was elected again and although won a minority, it was enough for me to say that we are still a fundamentally good country and we will still make the right decision.  Now there are many more nuances there since Andrew Scheer didn't exactly inspire confidence and "lost" the election more than you could say Trudeau "won" it.  But overall, I think a lot of us patted ourselves on the back and did not really acknowledge the differences that exist in our country.

In the opposite way, you could see that the United States has been deeply divided for some time, long before Donald Trump became President, but many people believed that this year things would turn around and the country could be more united and electing Biden would be proof of that.  Many people thought that this would be an early landslide victory for the Democrats and then Trump and the Republicans could back down and things could carry on, with only a slight four year blip in a relatively stable country.  That did not happen.  As I write this, we still do not know the official end result, but we do know that many many people have no problem whatsoever with Trump as their President, and that is the thing that troubles me.  Even if Biden manages to win the election, the United States cannot ignore the deep divisions, and it may not pat itself on the back. There are big problems down there and having Biden as President won't solve those problems overnight. 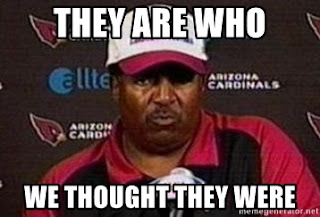