Last week I got to go to Miami for work!  So far my work trips have been to Timmins, and no shade on Timmins, but I mean!!  I don't actually travel a lot of work, so the novelty has not worn off.

Sitting with my colleagues before our flight.  We were flying American Airlines out of Terminal 3 (thumbs down to Terminal 3, it's like a whole different place than Terminal 1, even though it's the same airport, I do not understand!).  The flight itself was fine though, and I watched an episode of Belair and The After Party. 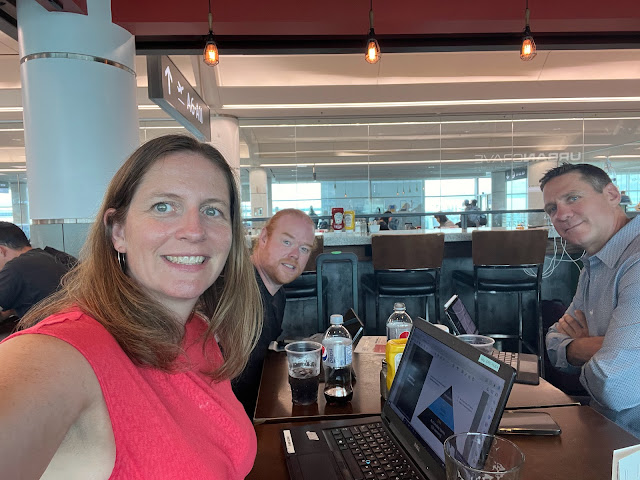 Checked into my room at the JW Marriott. 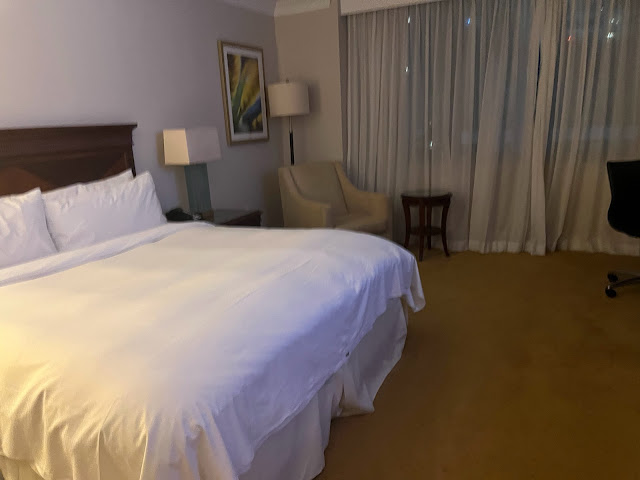 We were planning to meet for breakfast at 7:00 on Wednesday morning, so I had to get to the gym shortly after 6:00.  I did a Pelton treadmill run. 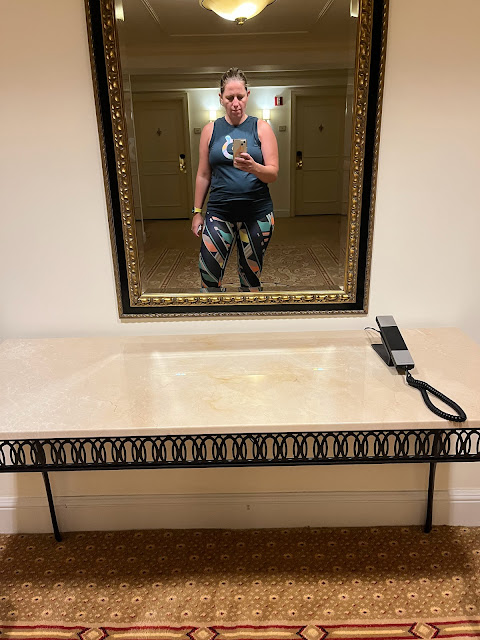 Then quick shower (that didn't take) before rushing down for breakfast. 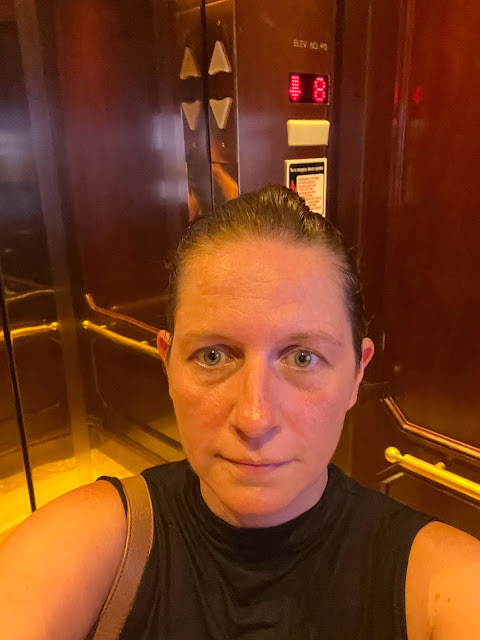 After breakfast, I did a bit of work in my room, but then went outside to see the water. 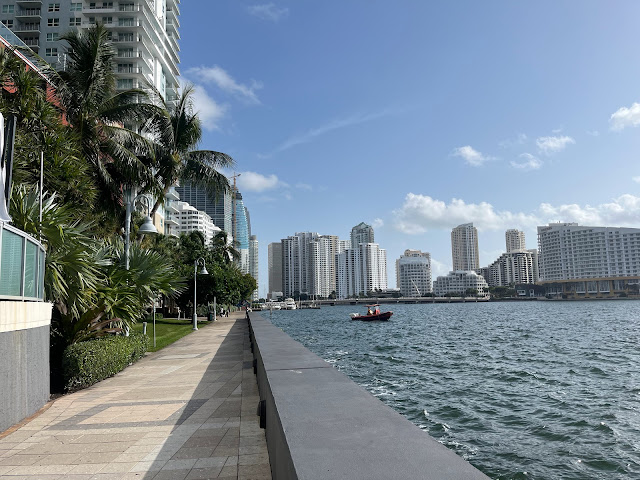 And couldn't resist getting another coffee and pastry at the cafe across from the hotel. 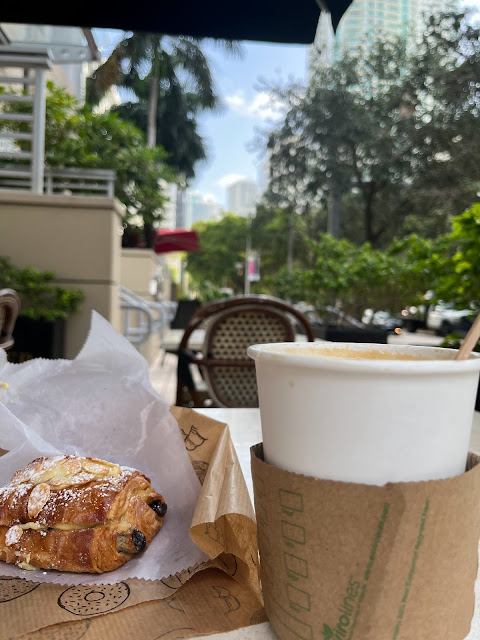 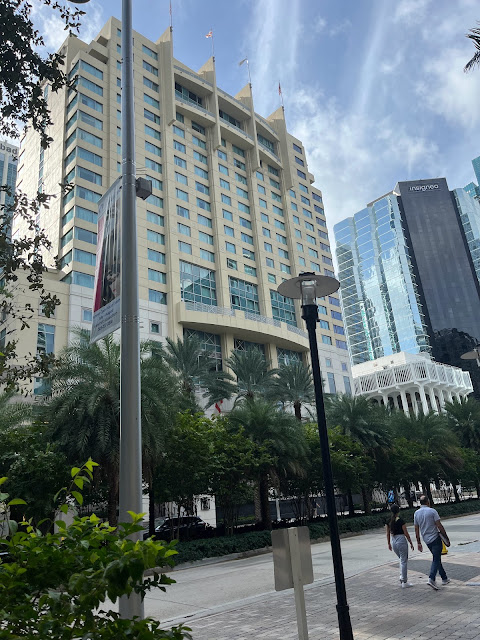 Then went to the meeting that we were in town for.  The view from the conference room was the pool at our hotel. 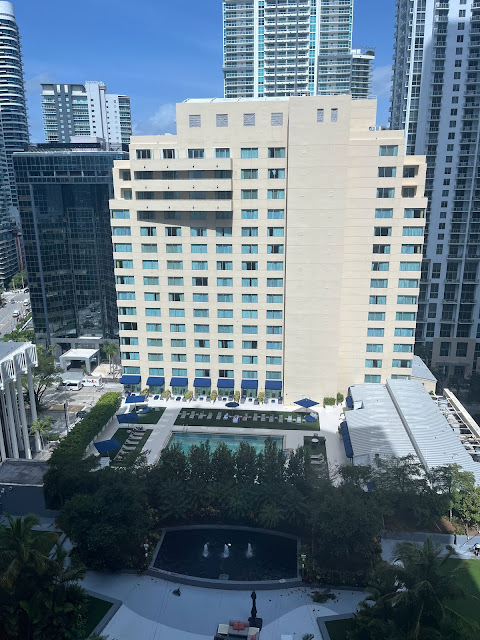 After the meeting wrapped up, instead of being a responsible employee who went back to their room to do more work and take calls (like the others did), I hopped in an Uber and went to the beach :)  And I regret nothing!
I chatted with my driver on the way and he pointed out some things to me (and when we drove by the Miami Heat's arena threw some good natured shade at Kyle Lowry who didn't have the best year in Miami).  I asked if he was from Miami and he said no, he was from Cuba.  I asked when he came to the US and he had the most interesting story.  He was part of  Operation Peter Pan in the 1960s.  I had never heard of this, but you can click on the link to read more about it.  He said he was sent to an orphanage in Montana in the middle of winter and he didn't speak a word of English.  His parents did end up coming over and he was eventually reunited with them.
My happy place! 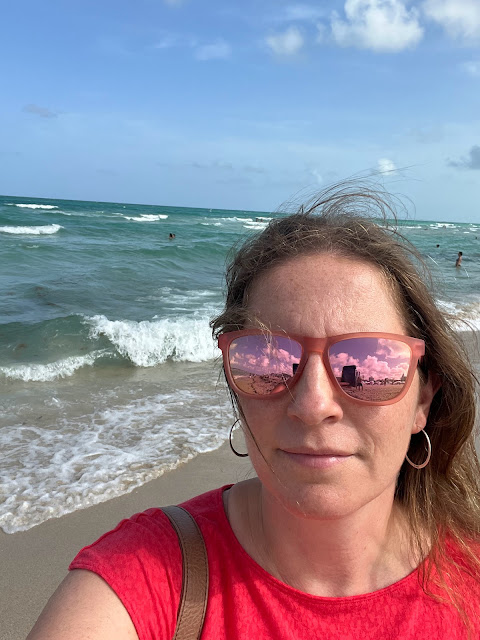 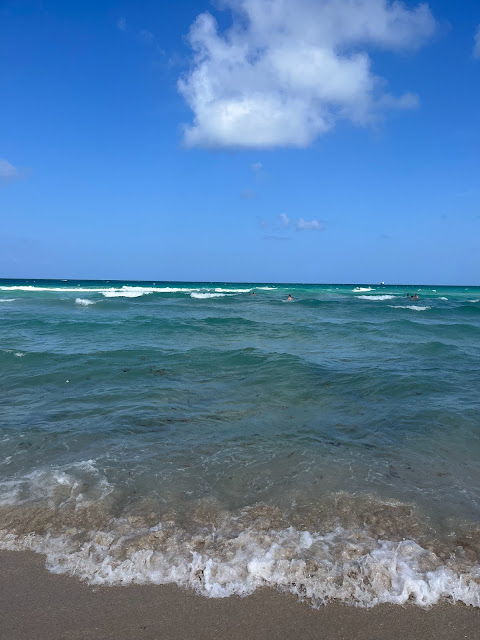 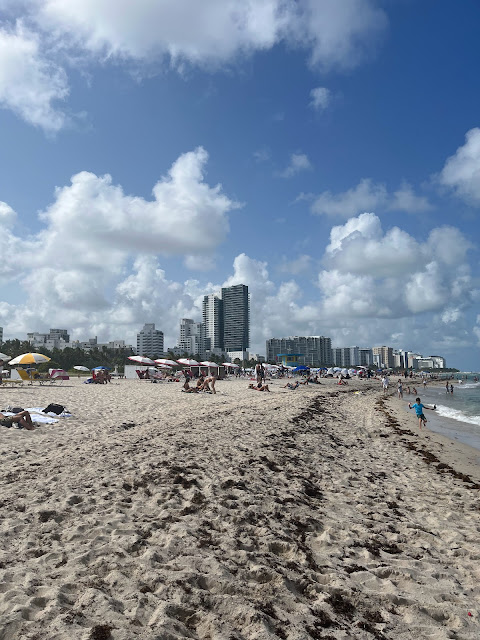 I could have sat here all day. 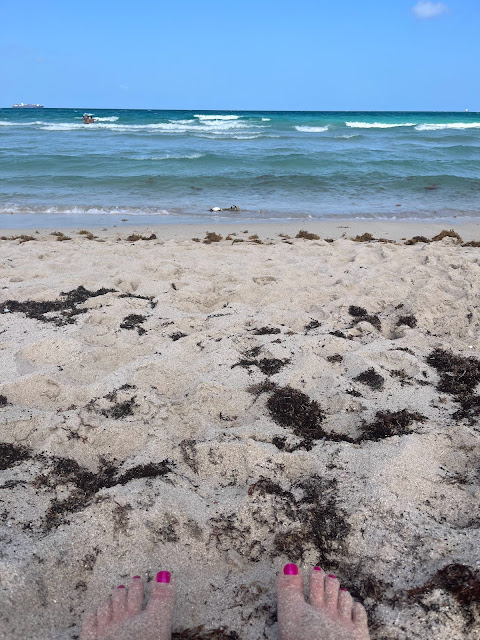 But I picked myself up and walked down the beach.  I randomly chose a path back up to the street and found myself in the Art Deco District. 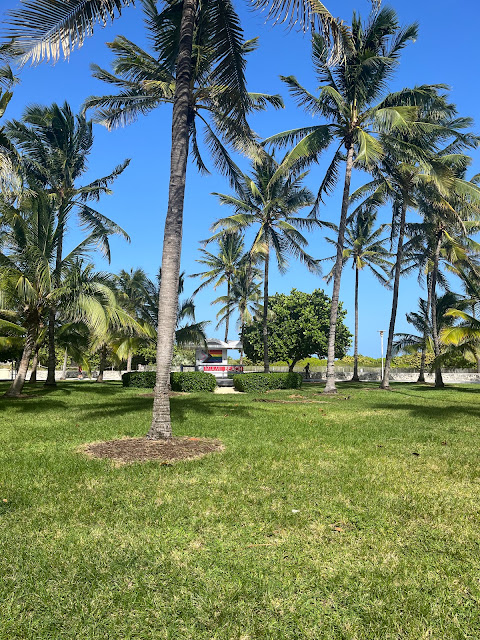 So many pretty pastel buildings. 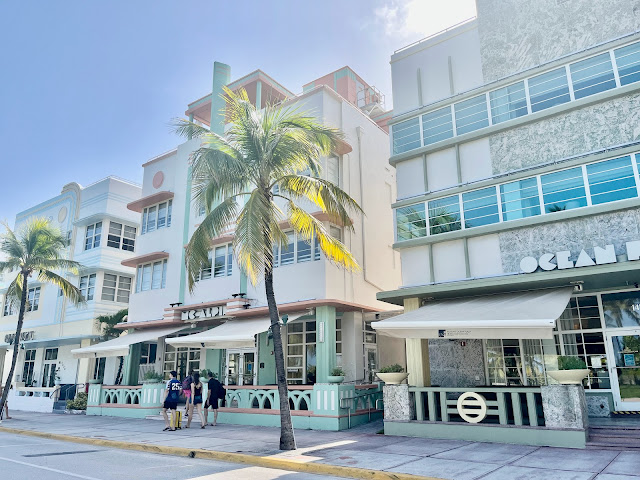 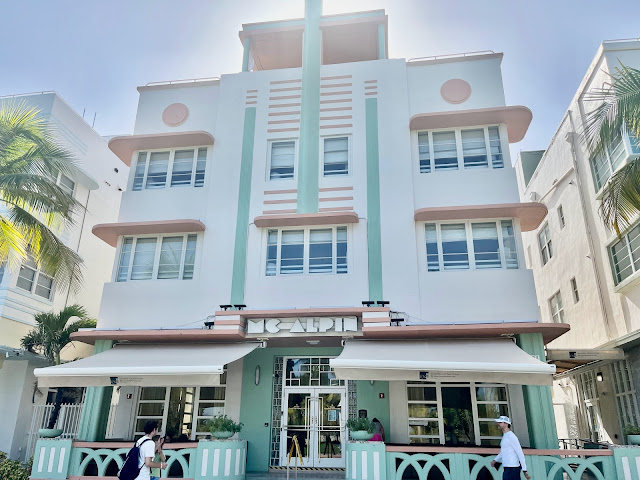 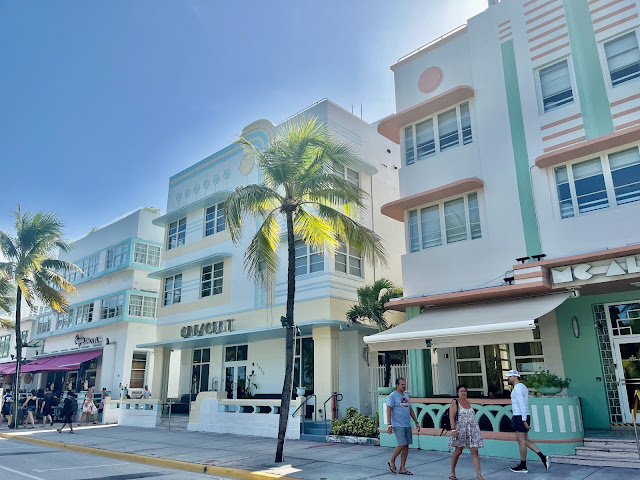 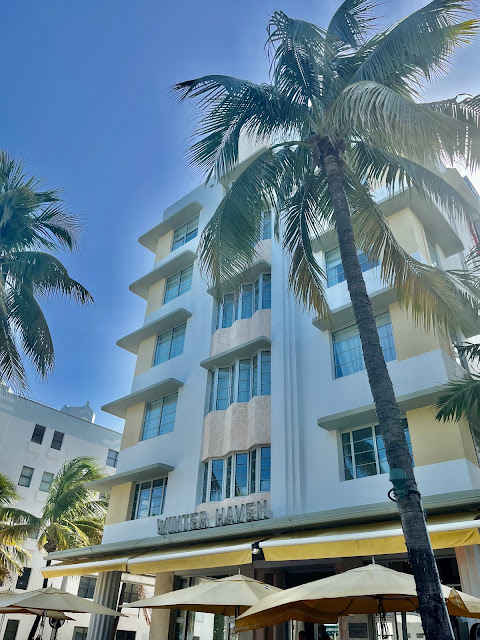 This is the building they used for The Birdcage movie. 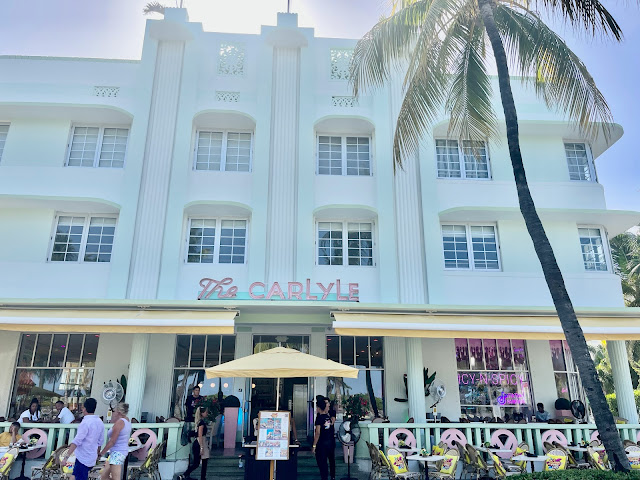 There were a few different places to eat but I chose Pink Taco for its happy hour margaritas. 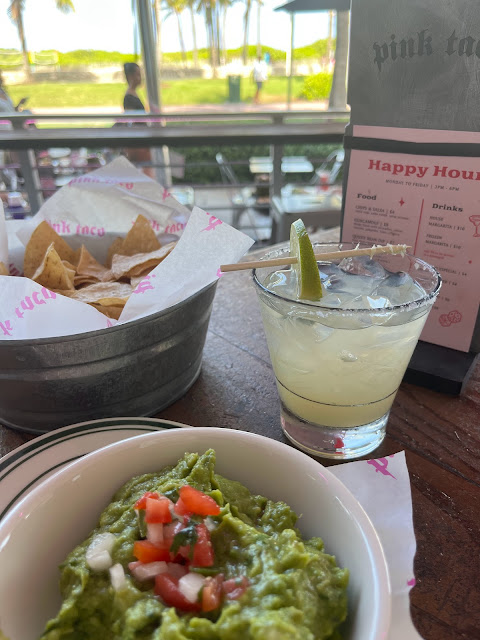 I got an Uber back to the hotel to get dressed for dinner.  I was meeting everyone at Novikov. 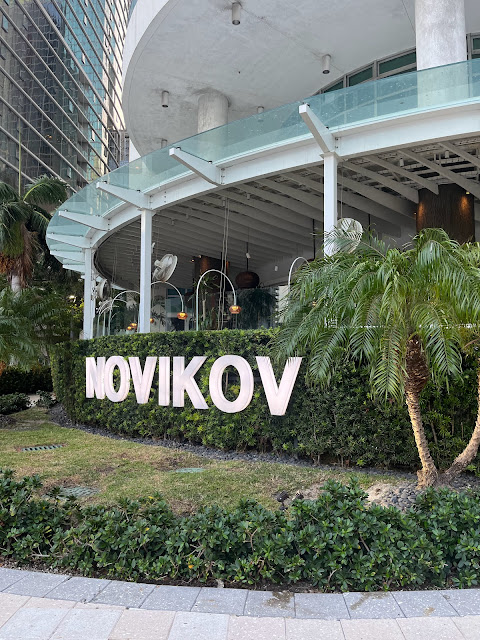 I enjoyed the Oxacan Sun cocktail. 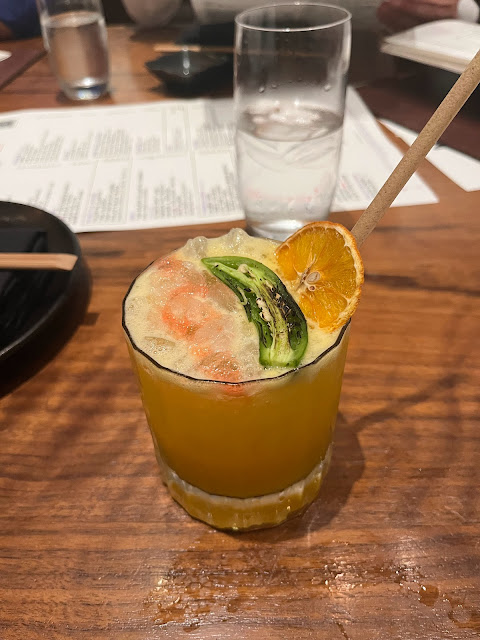 On Thursday morning I had the best breakfast at Carrot Express, a huevos rancheros burrito.  I ate in my room, did a bit of work, and indulged in some Real Housewives on my comfy hotel bed.  I love trashy TV when I'm traveling. 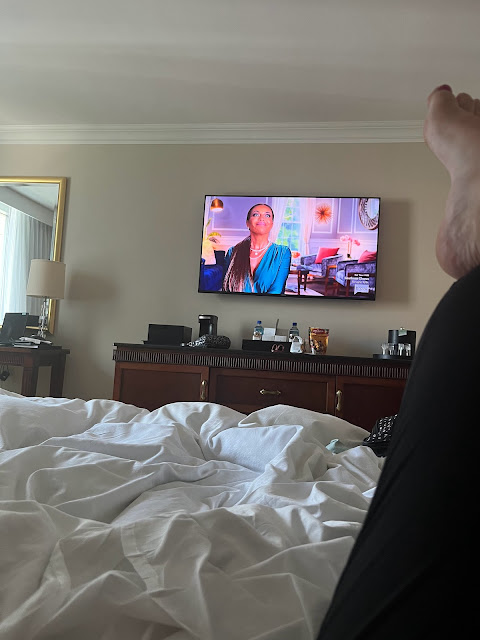 Then home with no real issues, once again, Nexus is worth every penny.

I told the girls I usually travel with that our next trip is to Miami and they were quick to write back they are fine with that!! Let's book it ;)