I had an excellent book reading month for once! This is due to being on holiday and two round trip flights.  It was also due to some great books that I couldn't put down and read even when I was at
home.
First up was the last book on my 2022 Reading List - Fight Night by Miriam Toews. 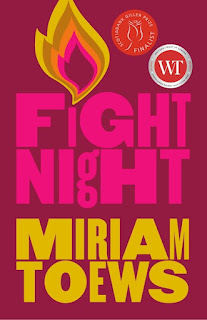 Miriam Toews wrote one of my most favourite books (All My Puny Sorrows that was made into the most beautiful movie) but also wrote one I didn't care for (Women Talking that has been made into a movie and will be premiering at TIFF and I will probably watch it; it's directed by Sarah Polley).  This book, Fight Night, was described as the Ted Lasso of books, so I thought I would give her another chance.  And she has roped me back in, this was a great book.  Set in Toronto, it is about a young girl living with her pregnant mother and colourful grandmother.  The girl, Swiv, has been expelled from school for bad behaviour (although it sounds more like a misunderstanding) so she is with her grandmother all day.  The grandmother is like Ted Lasso in that she is loveable, makes friends wherever she goes, had some great sayings and stories, and is genuine. Some parts of the book are run-on narratives of the grandmother telling stories or Swiv remembering different things, but it works.  It has some lovely details and you feel like you know characters just like these ones in read life.  It also had my tearing up at times, which is classic Toews, she writes heartache well.
Next up was The Younger Wife by Sally Hepworth.
I don't think I had read Sally Hepworth before but I know she is popular and I can see why.  I loved this book and could not put it down! This story is about two adult sisters, their mother is in an assisted living facility with dementia, and their father is remarrying a younger woman.  A few things don't seem quite right as we get closer to the wedding and we hear the story from the point of view of the two sisters and the fiancée of their father.  I caught some early clues so I felt pleased with myself when I had a few things figured out.  I will be picking up more Sally Hepworth books.
Then I read Truths I Never Told You by Kelly Rimmer 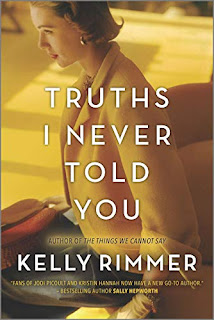 This was also a page turner.  I read another of her books, All The Things We Cannot Say a few years ago and had enjoyed it too.  This story starts with a young mother with four small children in the 1950s who is clearly suffering from postpartum depression (although undiagnosed at that time) and her journal entries of her struggles. Then we skip to "present day" (the 1990s) when the children have grown and their father is dying.  We know their mother had died when they were children and apparently the journal entries are that of their mother, and they start to uncover the letters when they are cleaning out the father's house.  We go back and forth from past to present and gradually learn about the circumstances surrounding their mother's death, not as straightforward as they were led to believe. Certainly some hard parts to read but very well done.
One nitpick I have is that the author is from Australia but the story is set in the United States and she used the phrase "fell pregnant" which is a British/Aussie way of saying "got pregnant" that we say in North America instead. I would have let one time slide but she said it every time and it bugged me.
Then I picked up In Five Years by Rebecca Serle. 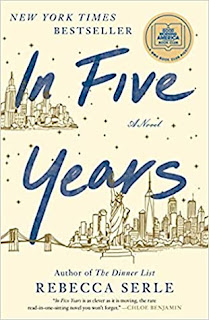 The Dinner List was this author's last book and I read that last year.  In that book the reader is asked to suspend disbelief and just accept that the main character is having dinner with five people, some of whom are dead.  We are asked to do the same thing in this book.  Here the book starts with an introduction to main character who has an interview for her dream job at a large New York law firm, and who has just gotten engaged to her boyfriend.  Then she wakes up in a completely different apartment with a completely different man. She spends about an hour there in that life (realizing it's five years from when she fell asleep on the night of her engagement) and then wakes up back in her regular life.  She is freaked out but wonders about it for the next five years when she actually meets the guy from her "dream".  I'll stop there on the plot but I will say that I had an easier time with this plot point than The Dinner List.
The author has taken two common interview questions, "What five people would have dinner with, living or dead" and "Where do you see yourself in five years?", and plays out the scenarios.  It's an interesting concept even with the magical element required.  She also writes with a good amount of layered details and I loved all of the characters in this one and really enjoyed the various twists.
Okay, last book, Smells Like Tween Spirit by Laurie Gelman
This is the fourth book in this series  - Class Mom, You've Been Volunteered, and Yoga Pant Nation.  I love these books, they are so funny and easy to read.  I laughed out loud a few times.  This is also so relatable because she has released them almost in sync with my own children's school years.  In Class Mom, E was in Senior Kindergarten and I was on mat leave so I did spend more time at school than I used to.  In this one her son is in middle school, just like E is going to be in soon.  I would recommend reading all of the books in order so you know who everyone is and so you get used to Jen's brand of humour.
One thing I think I commented on when I read Class Mom and it applies here too is that none of the moms in the book seem to work (other than teaching spin classes, or something else part time).  I don't know if this a Canada/US thing or a regional thing (like urban/rural) or just who my friends are, but I don't think I know any mom that stays at home with their kids, so it's just the norm that kids go to daycare and then before and after school care once they are in school, or have nannies.  I mean I know some people do stay home because on the occasions I have picked up the kids from school at dismissal time, I am always shocked by the amount of parents there to get their kids. *shrug* It doesn't matter to me what people do, but I just find it interesting.  There just seemed to be a lot more judgemental positions/comments from other parents in the book that I haven't experienced and it seemed like a shame if that is what people have to put up with.
(And I'm half done two other books, but will just add those to my tally for September.)
Posted by TorontoSAM at 6:00 AM