We are nearing the end of our book club year.  We read our second last book this month, The Paying Guests, by Sarah Waters. 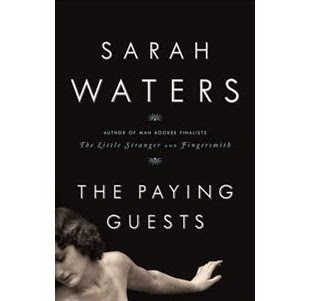 I feel like I say the same thing about my book club books each month - it was alright, but I didn't love it.  It was the same this time.  This book started out really slowly, and although it did pick up in the second half, it was still not that great.  I felt like the story line was so predictable, even though the author tried throwing something unexpected into the plot.  I think she wanted us to be surprised, maybe even shocked, at this plot twist, but it didn't really do anything for me. Maybe if I had read this book years ago (although it was only published in 2014) then I would have been more scandalized, but this stuff is pretty mainstream now.

I also felt that the plot devices were tired, I could have almost written the same story.  The writing and descriptions of things were good, and reminiscent of the time period in which the story is set (1920s England).  I was sort of expecting more Downton Abbey, and there was a bit of that port-war atmosphere, but my Downton desire was not satisfied.

I had no real sympathy for the characters.  There were aspects of them that were likeable, but overall, I almost felt they got what they deserved.

I don't think I would recommend this book - you can do better.

See our past selections here:

A little note about A House in the Sky.  I went to see Amanda Lindhout speak last week at a Women of Influence event.  I really enjoyed it.  I wasn't sure what to expect of her.  I had mixed feelings about the book, and about her, but I think I'm a fan now.  It is pretty amazing that she has been able to recover from her time in captivity, and thrive.