This month our book club read "Beat the Reaper" by Josh Bazell. 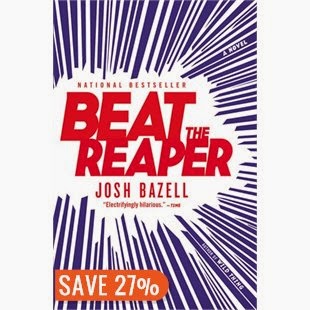 I will say that when we chose it I wasn't that keen on reading this book.  I don't know why, but maybe it was the title (totally judging a book by its cover).  I wasn't sufficiently interested until the 2nd or 3rd chapter, but then I really liked it.

I don't like giving away any spoilers about the books on here, but I will say there is a mob element to it and that is what drew me in.  I was late to the Sopranos party but once I got there I was a big fan.  This story reminded of that show and I kept trying to compare the book characters to members of the Soprano clan.

I mentioned this in last week's post that it is a little strange to cheer for the "bad guys".  The same was true for this book in a way.  By no means was I invested in these characters like I was with Tony, Christopher, Adriana, Silvio, Paulie, etc., but I didn't look at them with disdain or contempt.  I just took their story for what it was worth based on the circumstances, and I enjoyed it.

Can I just say since I've mentioned the Sopranos how much I miss James Gandolfini?!  I was just in the middle of watching the Sopranos for the first time and he died.  It was so heartbreaking because he was extremely talented.  If you love James Gandolfini too, make sure you watch Enough Said.
Posted by TorontoSAM at 6:00 AM