We had an absolute blast this weekend with our family in Ottawa (or more specifically Manotick).  Dave has two cousins that he spent a lot of time with when he was growing up.  We saw both of them, and their wives, and their kids, three boys and one girl.  E had so much fun with his cousins! 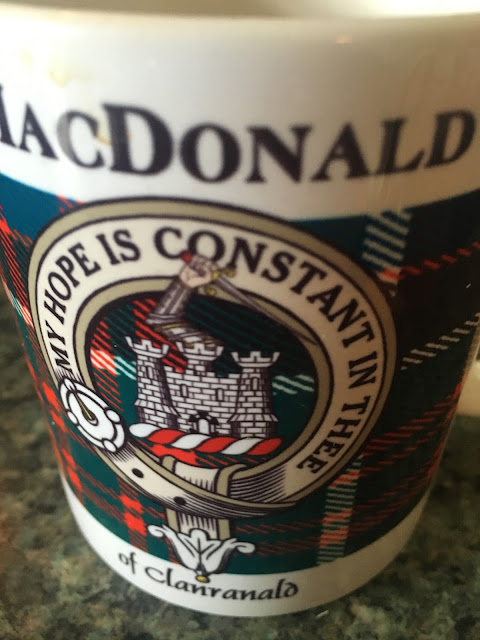 Dave and Adam on the deck enjoying the sun. 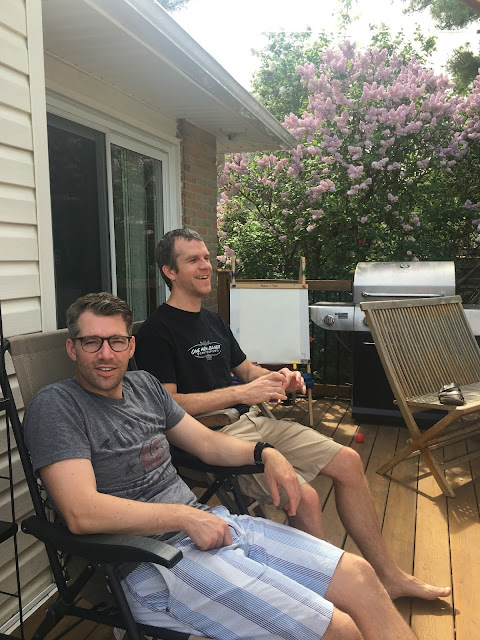 We arrived on Friday night, watched the Raptor game (they lost but it was still a great season and playoff run!).  We woke up to a beautiful morning on Saturday - complete with fresh cinnamon buns, muffins, fruit and coffee (my favourite type of breakfast).  We had no set plans for the day other than enjoying the outside.  A few of us took a walk to the local park before lunch. 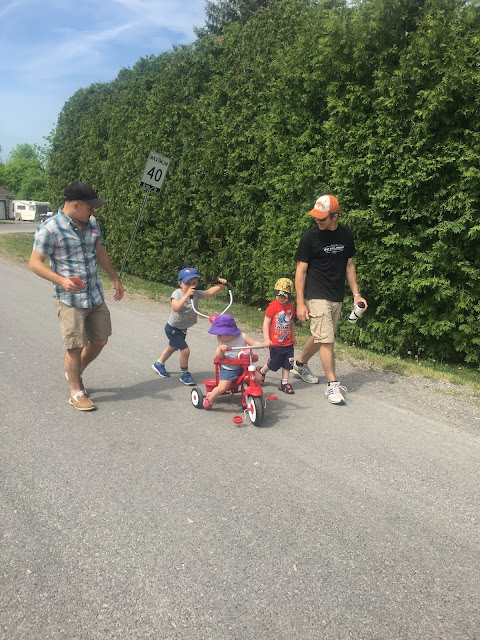 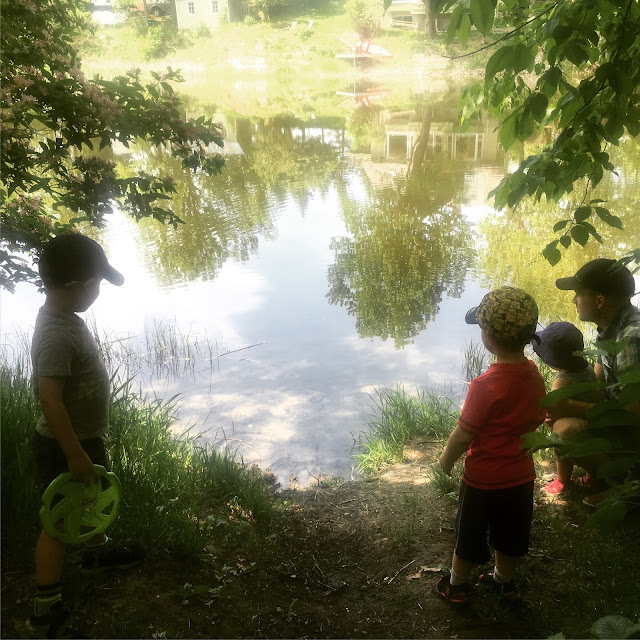 Chowing down on his lunch 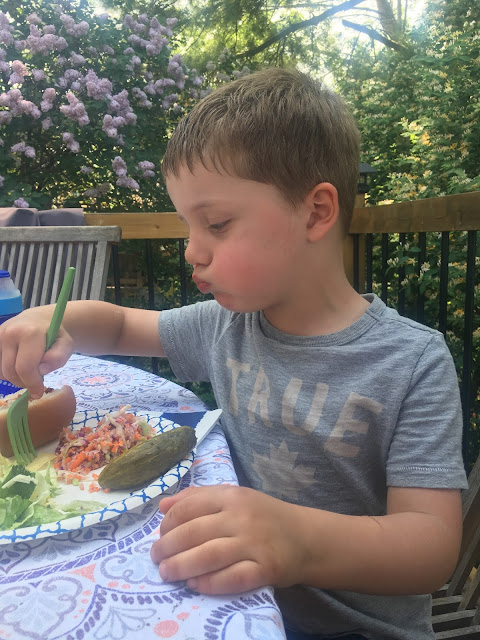 After lunch, the kids played in the backyard in the pool and sprinkler.  It was so hot and we were happy to have the shade. 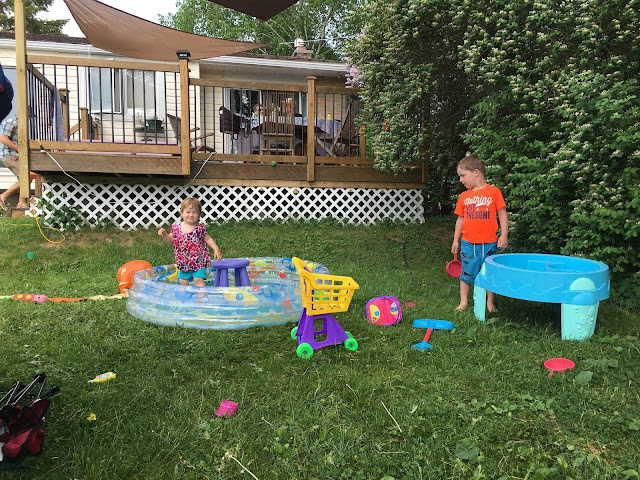 We had an early night on Saturday because the next day was half marathon day.  Plus Amy and Lindsay had run the 5K late Saturday afternoon, in the extreme heat, and it wore them out!  I didn't do any runs, but I was equally as tired after spending the day outside.

On Sunday, E and I got up early with Dave and Adam and drove into Ottawa for the race. Unfortunately Darren was sick so he could not run the half this time.  After we dropped off Dave and Adam, E and I settled in with our Starbucks to watch the start of the race. 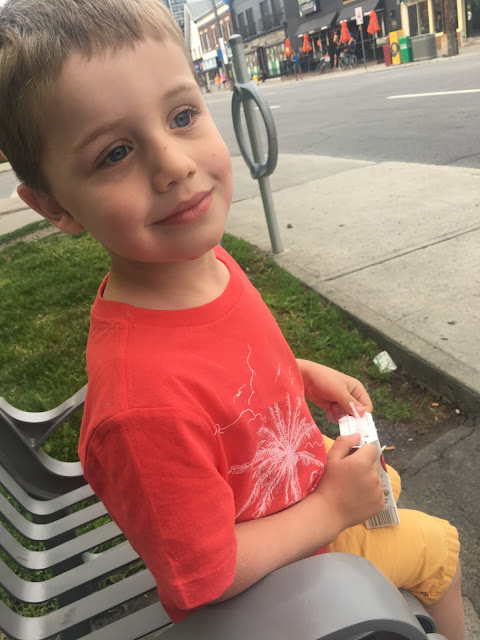 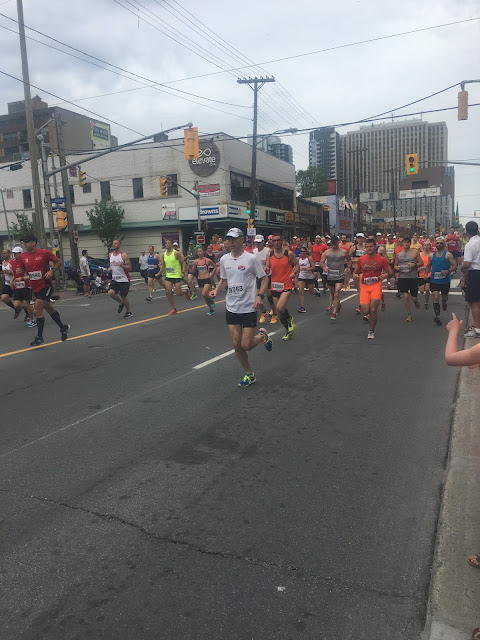 E stuck his hand out and got quite a few high fives, he loved it! And we saw the boys when the ran by, thankfully because Adam yelled out at me. 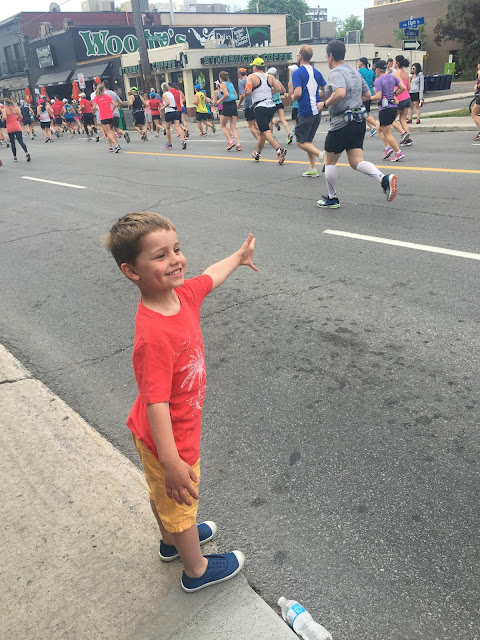 After the runners passed by, E and I took a walk up to the Parliament buildings.  I have been to Ottawa several times, but only ever in the dead of winter so I was happy to visit the city in the spring.

E went to pose with this statue and when he touched the leg, he assured me that it wasn't a real bear. 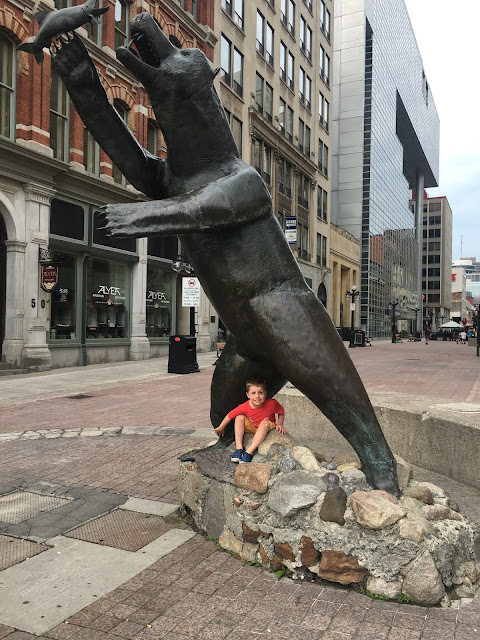 As we walked up Elgin Street, I tried to explain that Ottawa is the capital of Canada and this is where our Prime Minister and the other people that run the country work and live.  I thought E asked me where "that guy" lives, thinking he meant the Prime Minister so I pointed down towards the general direction of Sussex Drive and talked about that.  But then E says "no, where does God live?".  Funny question. 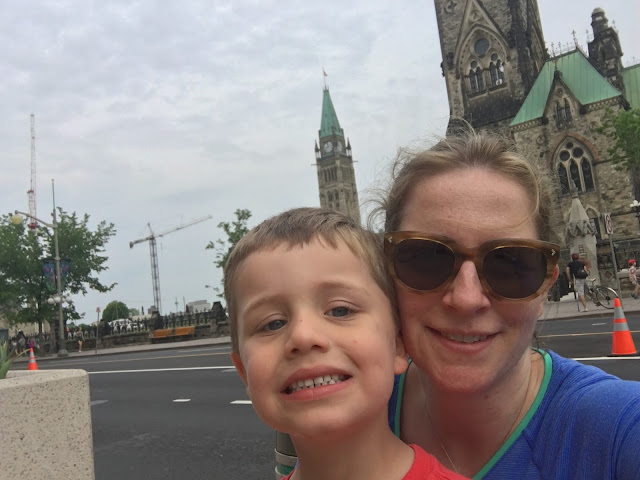 He wanted to go in.  Maybe next time we can get a tour, we do know a Senator after all. 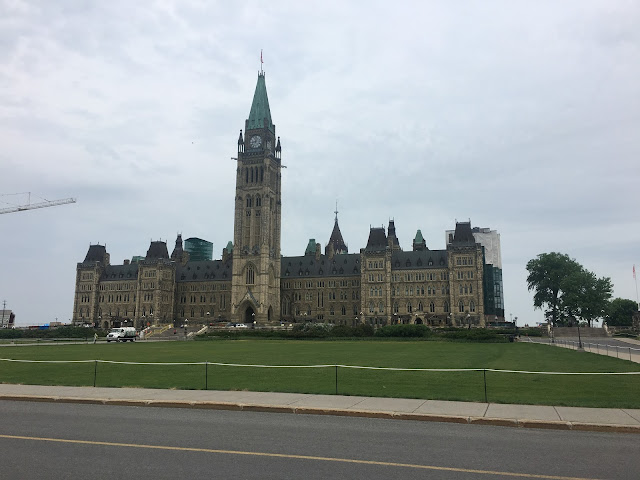 The War Memorial was closed for construction, but we got this picture with a soldier. 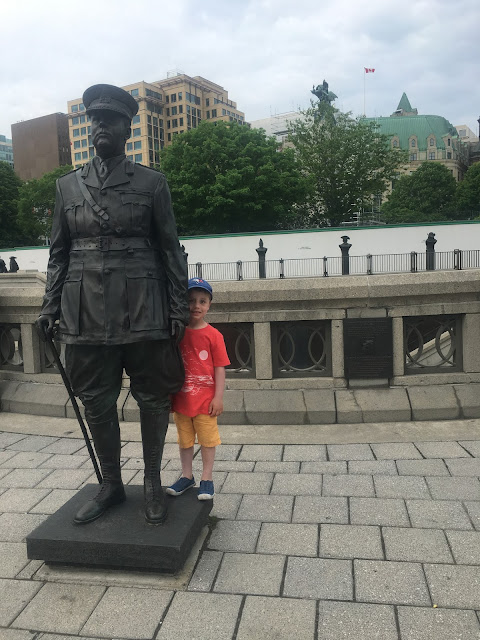 Then we walked along the Rideau Canal and we thought we could make it down to where the rest of the family was watching the race, but we ran out of time, so we settled in near the finish line instead. 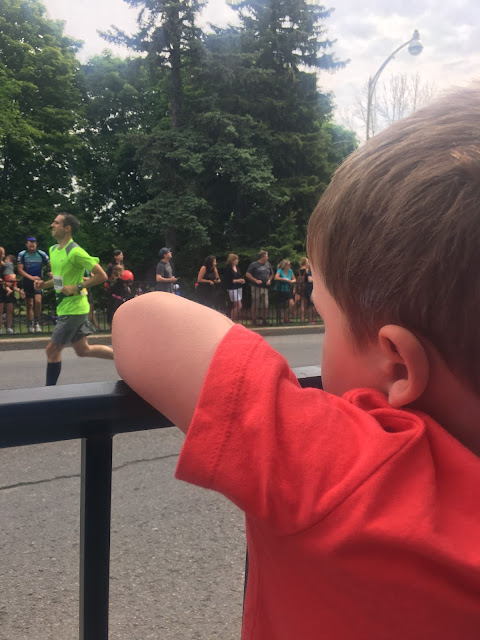 The runners after the race. Great work guys! 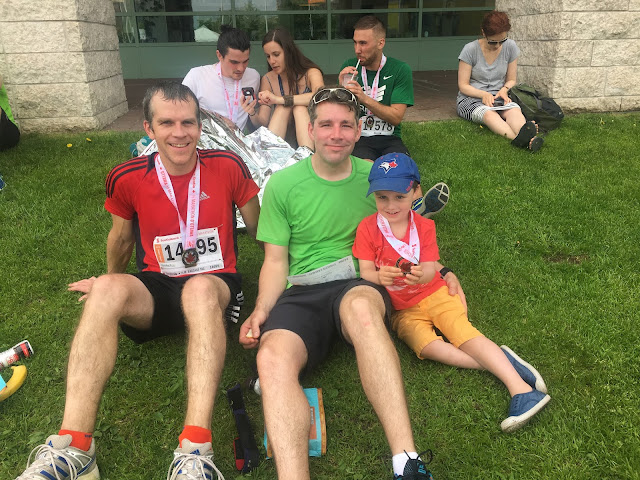 Dave's stats from his run.  The weather turned out to be perfect for the half marathon, despite all the worry about the heat wave earlier in the weekend.  They were able to keep a quick pace and both had great times in the end. 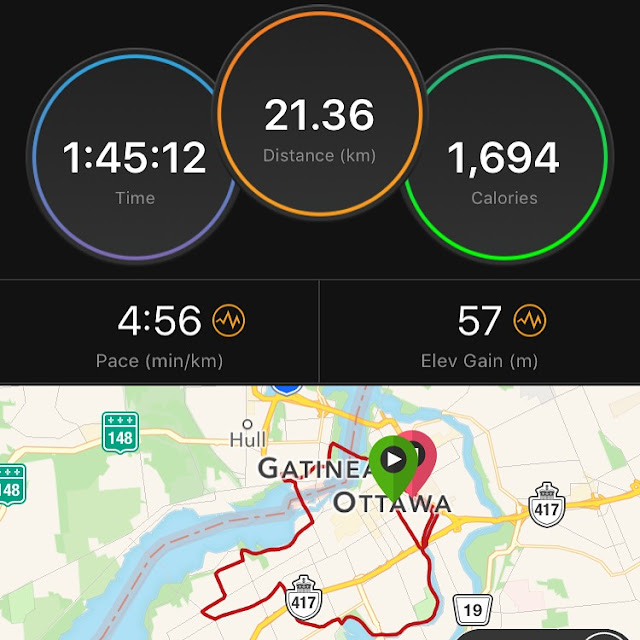 We headed back to the house for some lunch and a few more rounds in the kiddie pool for E.  Needless to say, when we got in the car to go home, he was quick to fall asleep. 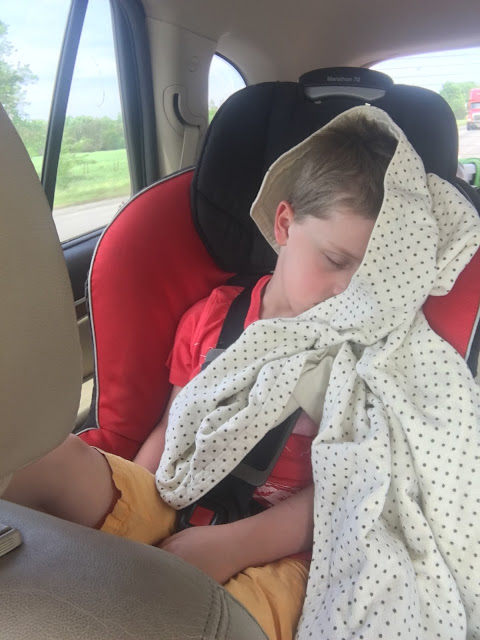 We stopped in at the Big Apple on the way home, you know what this is if you've ever driven on the 401 east of Toronto.  There is a lot going on there.  We got some supper and bought an apple pie to take home.  E had the grilled cheese with apple and bacon on apple bread.  I will be getting that next time too! 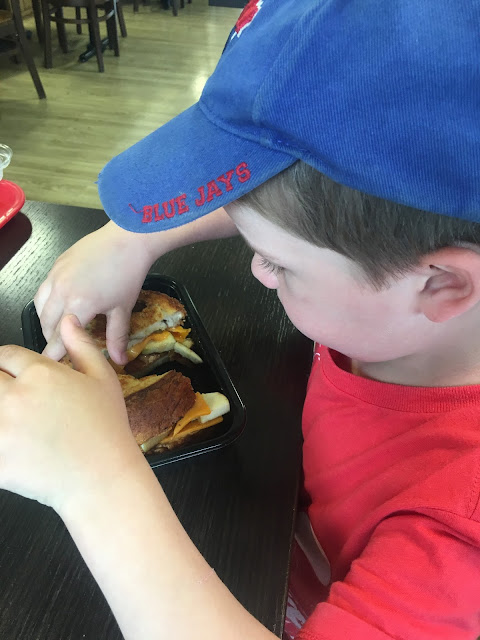 A very successful weekend and we are looking forward to doing it all again next year.  They have a 2K race that E would like to do, and I could do it with him with the baby in the stroller.

My only regret is that we never got a group photo of everyone! :(
Posted by TorontoSAM at 6:00 AM