Media Wednesday - The Couple Next Door

I picked up The Couple Next Door from the library recently. This book is our book club's final selection (and my choice) even though I won't be attending anymore, I still wanted to read it on my own. 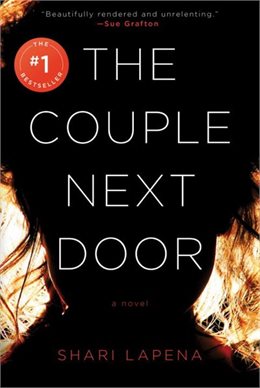 The book is by a Canadian author, Shari Lapena, although it was not set in Canada (at least not that I could tell).  The setting was kind of generic.

It is a mystery type book, written like The Girl on the Train or Gone Girl, you know half of the story but you don't get the whole thing until the end.  I thought it was okay but I wasn't a big fan.  I like a mystery book and novel where if you're paying attention you're able to figure it out by yourself rather than just being told what has happened.   This was a mystery but there were no clues that could lead me to solving it, and a lot of red herrings.

Another thing I did not like about the book was the title.  I don't want to give too much away, but it was not what I expected.  I knew absolutely nothing about the book when I started reading it, which I prefer, and I was expecting something else.  I know this is vague, but I think it's better to read it with no prior knowledge of the plot.

Despite its shortcomings, I did want to keep reading the whole time and I finished it fairly quickly.  I sympathized with the characters, or at least one character.  I really wanted to know what would happen and I thought it could have gone any number of ways.

If you want an easy read, pick it up, but I wouldn't put it in the same category as Gone Girl (that book I really could not put down).