Q and I had a pretty quiet weekend but Dave and E did a few fun things!  On Friday night we made some homemade fish and chips and then Dave and I watched American Made.  It is based on a true story with Tom Cruise as a pilot in the 1980s, we liked it.  We also watched the first episode of David Lettermen's new series, where he interviewed Obama.

On Saturday morning Dave and E hopped in the to go to E's first ski lessons of the season.  Q and I went to swimming lessons.  I made the mistake of letting him "jump" off the side when we first got in the pool so that was all he wanted to do for the rest of the lesson and did not appreciate doing the other things.  Fortunately we got to jump off the side during the lesson too and again at the end.
Enjoying a snack on the way home. 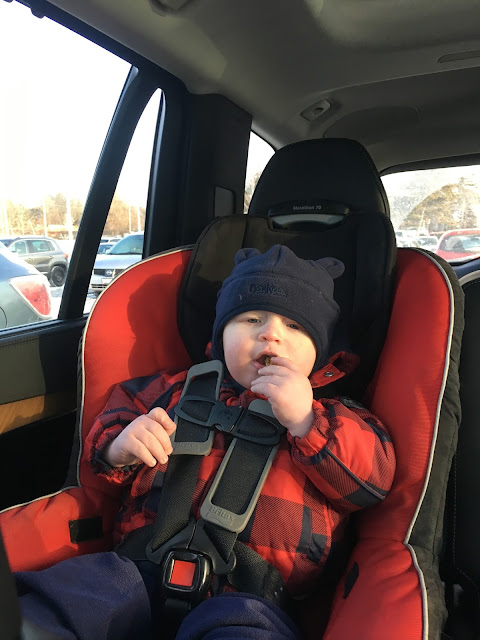 After his morning nap we went to Costco.  Dave had signed us up last week but I had to go and get my own membership card.  It was very busy of course, but we managed to get a few things and Q made friends with a few ladies by waving and smiling at them. 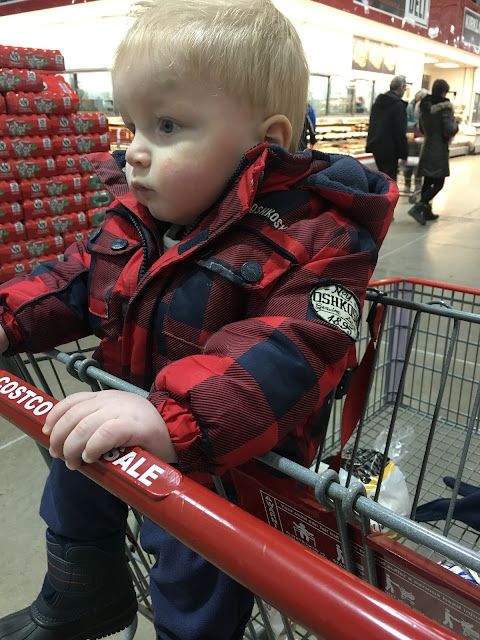 Meanwhile, E was suited up for the race team. 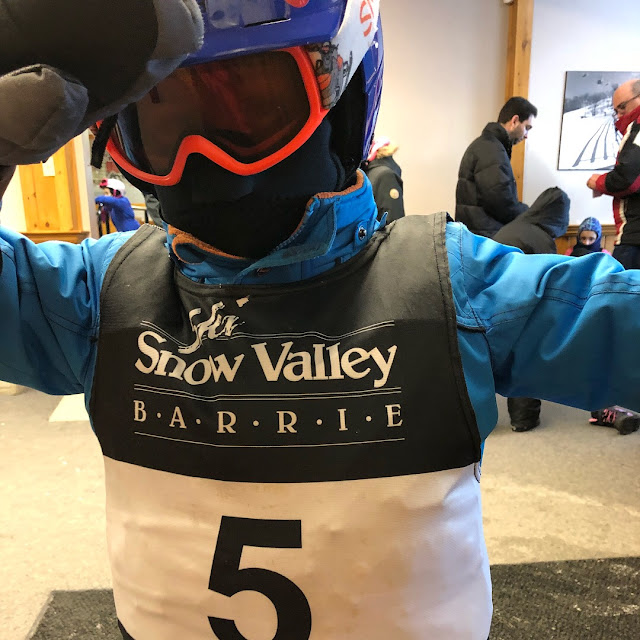 His friends are in his group. 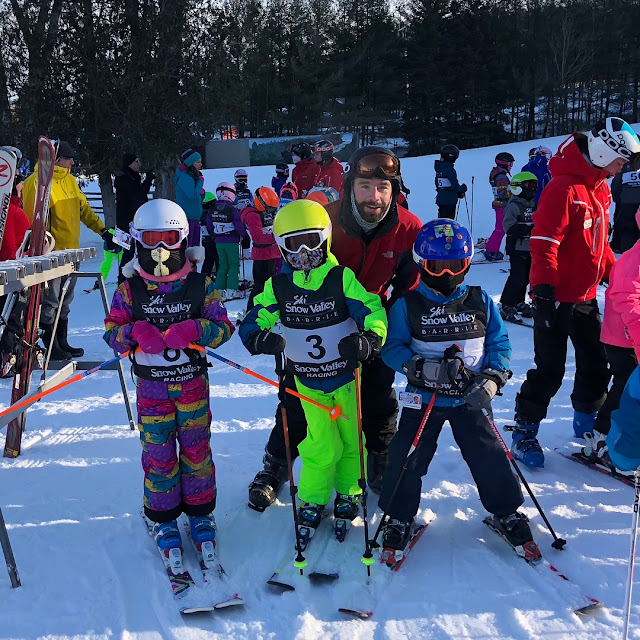 Q slept for awhile but then when he woke up he had a fever so just wanted to snuggle with me and then we had a further nap in our bed. 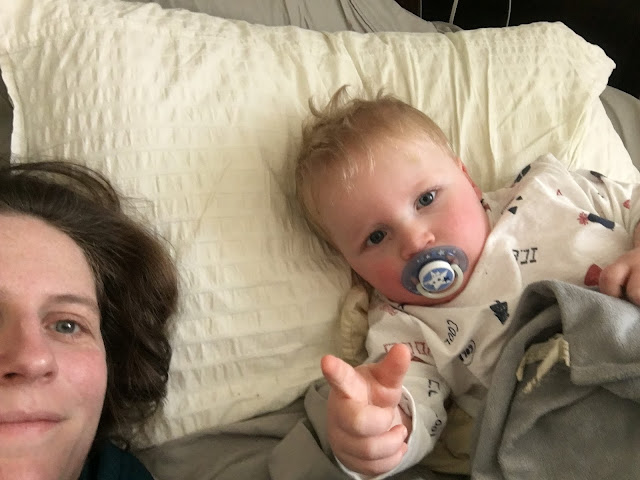 Since I hadn't seen E all day I made him pose for a picture with me (or rather I took this while he watched his show).  Note the chocolate Tim Bits all over his face. 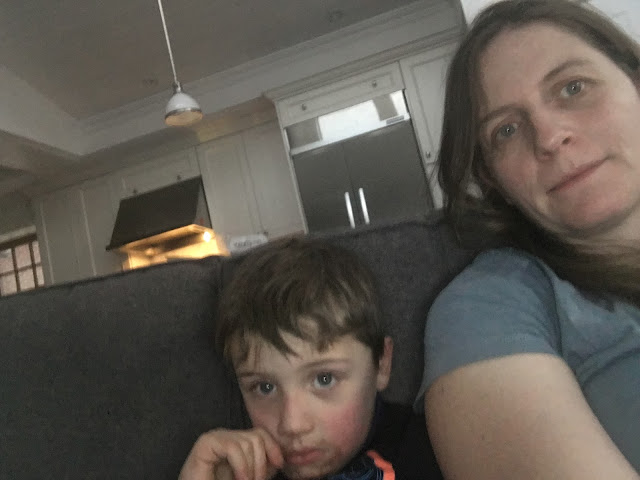 I made a vegetarian shepherds pie for supper that was very good.  It had mushrooms instead of meat.  After the boys went to bed, Dave and I watched Battle of the Sexes about the tennis match between Billie Jean King and Bobby Riggs.

On Sunday morning Q still wasn't feeling well so he stayed home and I went to church by myself, and then took a quick trip to the grocery store before E and Dave went to the Monster Truck show. 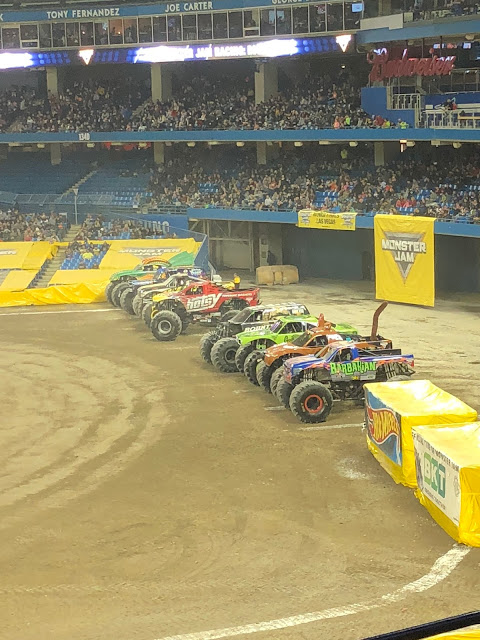 Q didn't do much all day except nap and sit with me on the couch.  I think his fever was attributable to the chicken pox vaccine he got last week.  The doctor said that a fever may occur about a week later.  He was hungry though and ate two little tacos that I wrapped up for him. 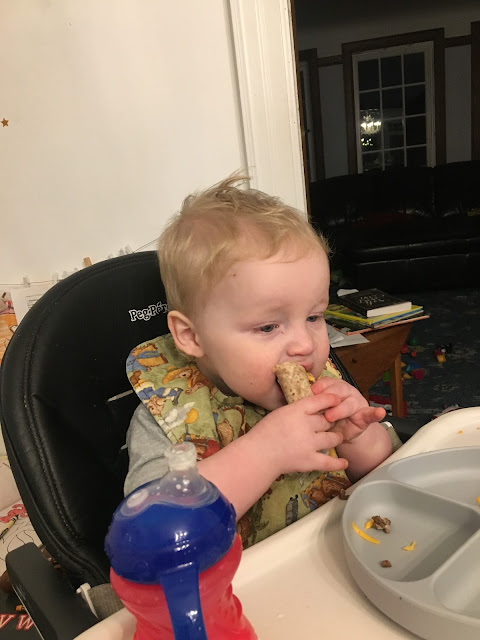 Since I knew my post would be pretty Q heavy, I made sure to snap this photo of E as he got ready for bed. 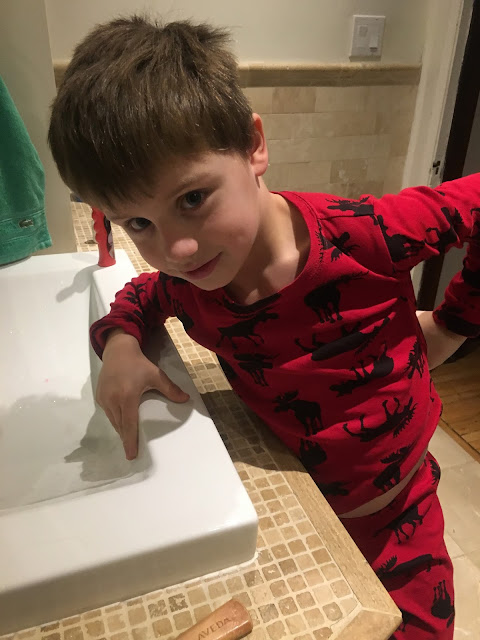 Q took the day off school on Monday since he needed the rest but his fever is gone so he is back to school today.