Here is a photo leftover from Thursday night at the school's Party in the Playground.  The fire department came by to show off their truck.  Q was a little more excited than this photo shows, but he was getting tired at the end of the night! 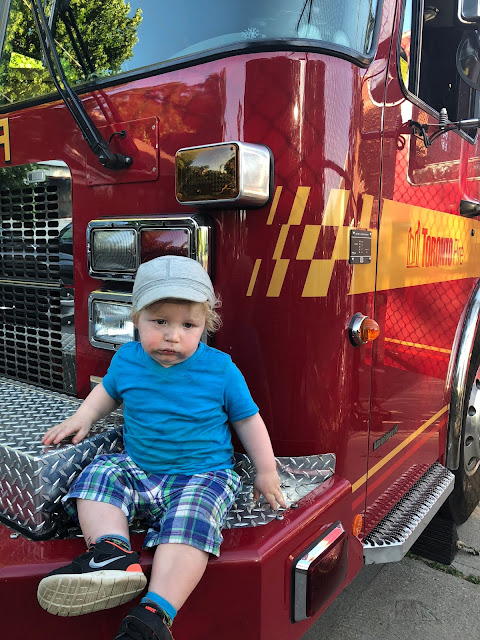 On Friday we ate a quick dinner so we could go for a walk with our neighbours to get an ice cream cone.  I thought I would be able to share mine with Q but he wasn't content with just a lick or two so the ice cream lady gave him a tiny scoop on his own cone and he was happy with that. 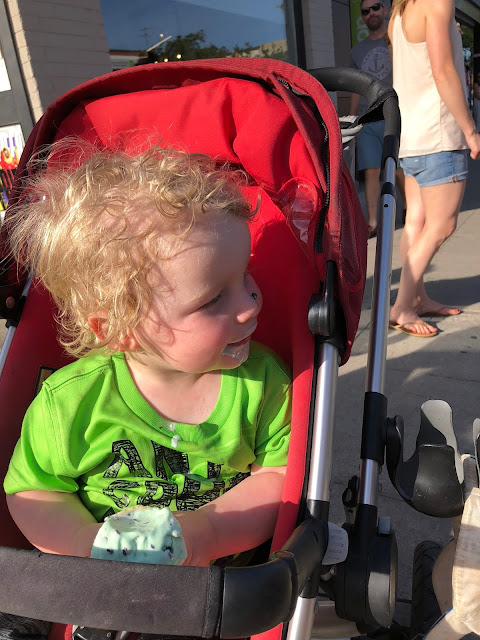 Yes, that's a chocolate chip on his nose. 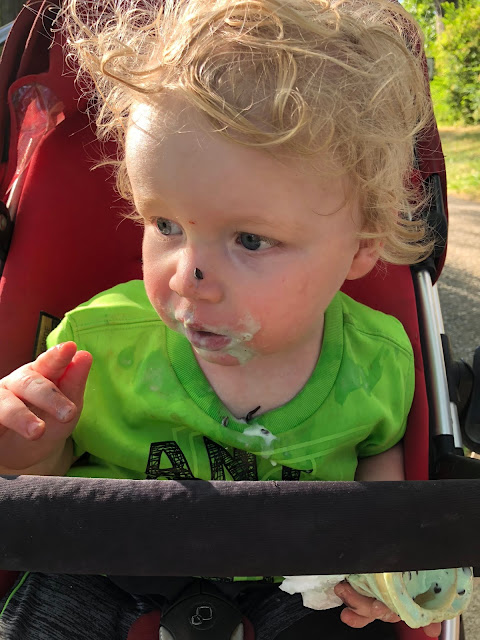 After the ice cream we stopped by the playground for a little while and then home to bed.  Dave and I watched Game Night.  It was pretty good, we like Rachel McAdams and Jason Bateman.

On Saturday morning the boys went to High Park for 8:30 t-ball practice, and Q and I followed later.  I ran and he fell asleep. 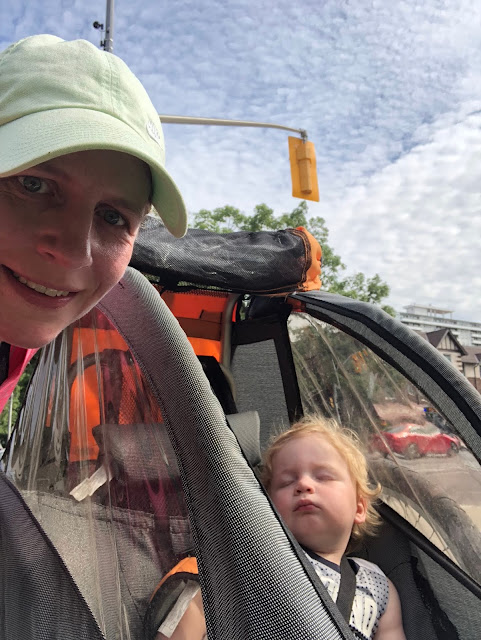 We watched E's baseball game and Q played by the garbage bins. 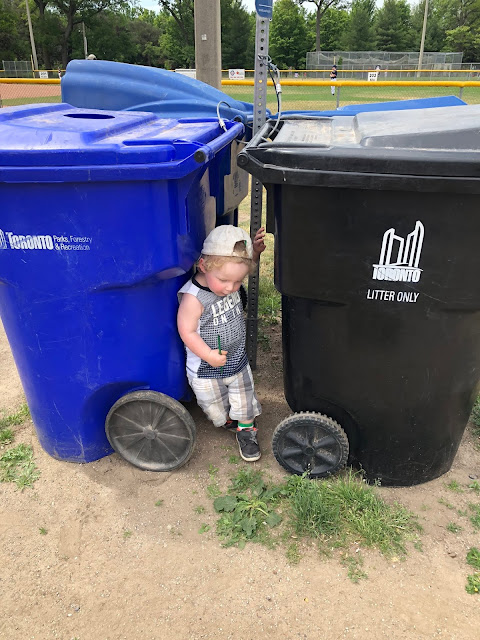 Striding to the plate. 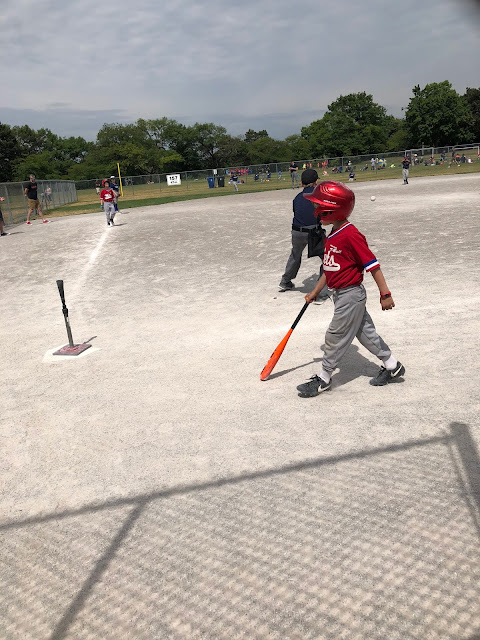 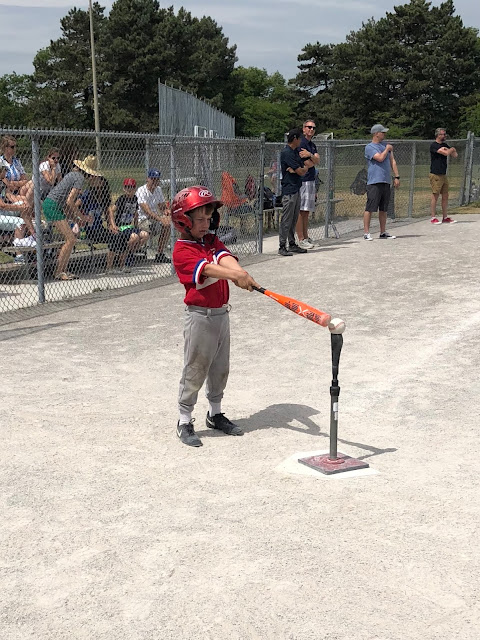 Q and I did some errands on the way home and then it was nap time for him (again).  We watched a bit of the World Cup and the golf, and then We got the pool out. 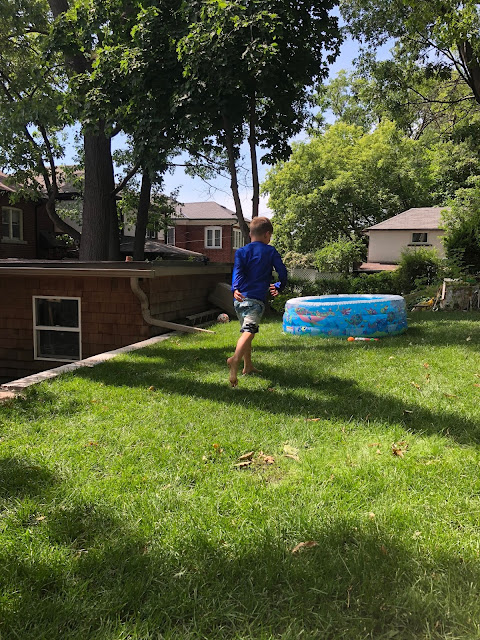 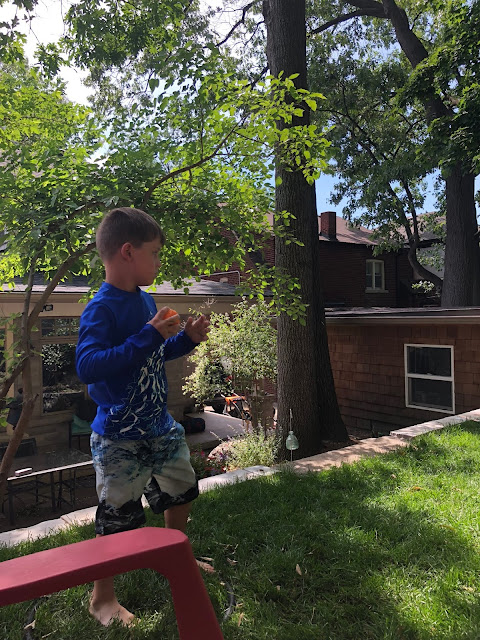 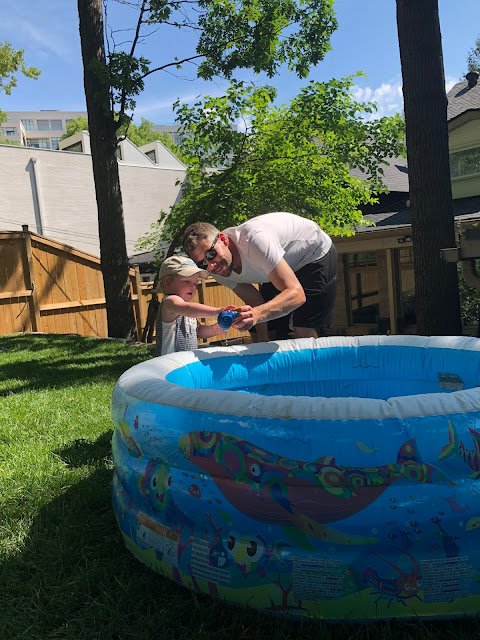 Enjoying one of my birthday gifts. 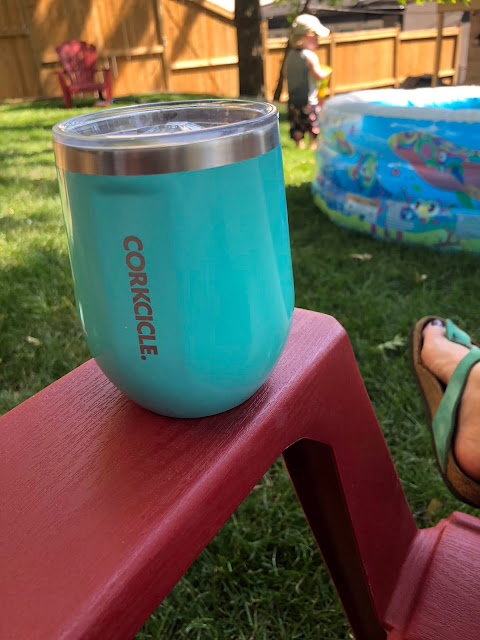 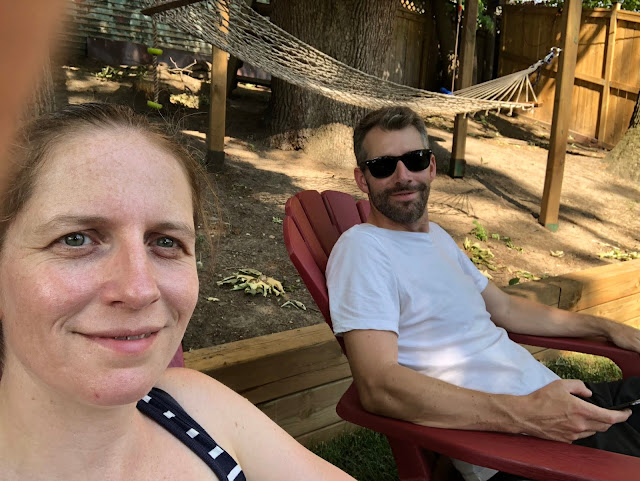 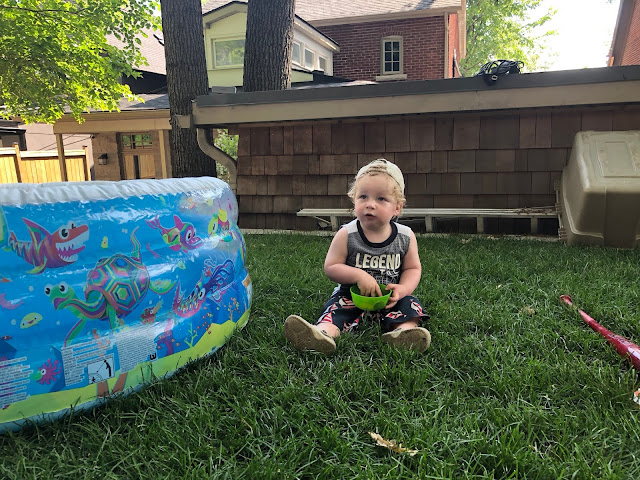 One of E's friends stopped by too 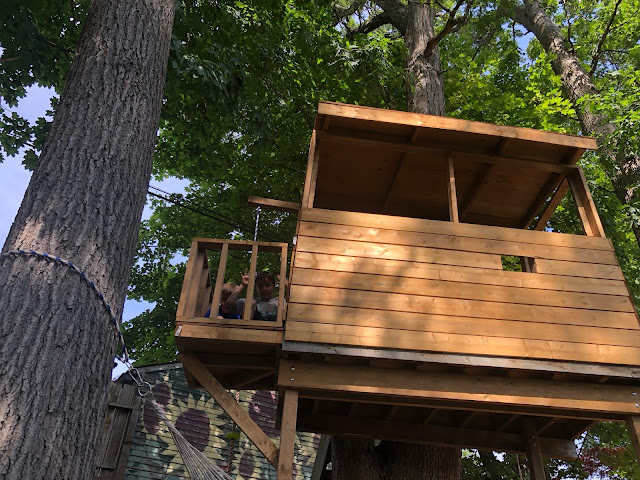 We had a shrimp pasta salad with roasted vegetables and a pesto sauce.  Dave and I watched some TV before a relatively early night.

The next morning Dave headed out for a run and I got to work making some cinnamon buns for Father's Day breakfast.  I have only once attempted the yeast version and that takes way too long, and I have tried Dave's grandmother's recipe but it never really turned out for me.  When I found this recipe for a no yeast bun that is made in a muffin tin, I thought I would try it and they turned out really well.  I will definitely make these again. 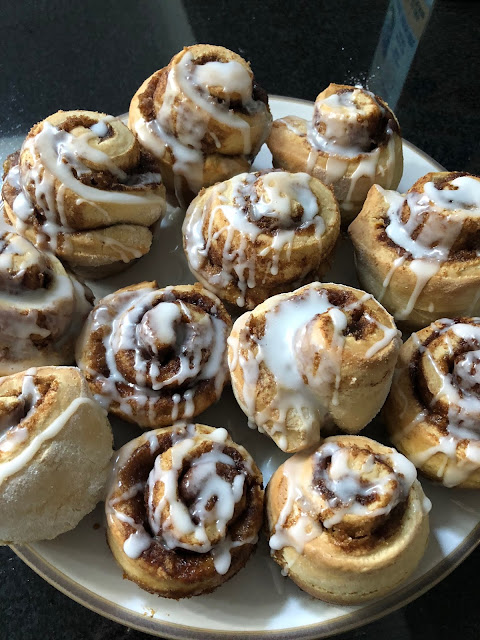 Dave opened his cards and enjoyed the cinnamon buns and smoothie I made.  E and I went to church while Q stayed home with Dave so he could have a good morning nap and get ready for our afternoon adventure.

We have been craving some tacos so I thought about going out of our usual neighbourhood and trying out Grand Electric in Parkdale.  We got a seat on their patio and enjoyed lots of great food. 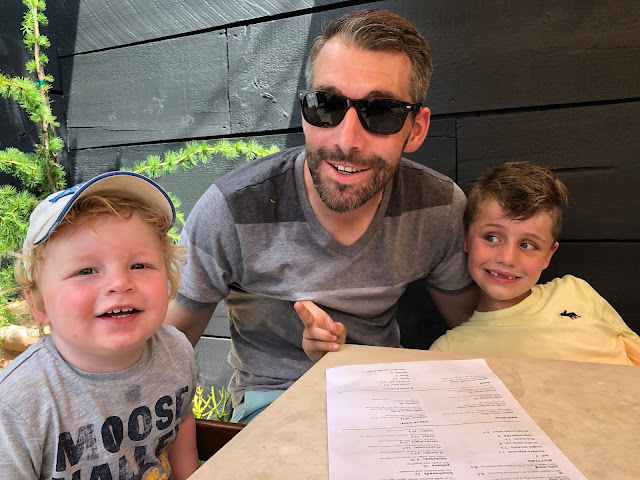 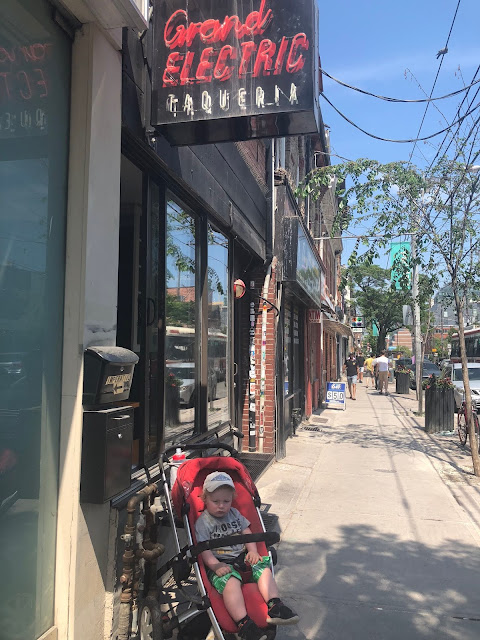 Then we just headed West to Roncesvalles and took the streetcar up to the subway to go home.  I liked this art - There is no Them, there is only Us. 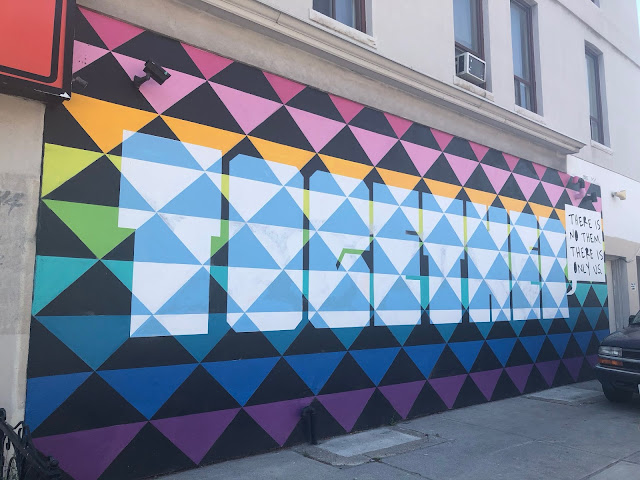 We had a quick detour to a playground and then we found this cookie place.. 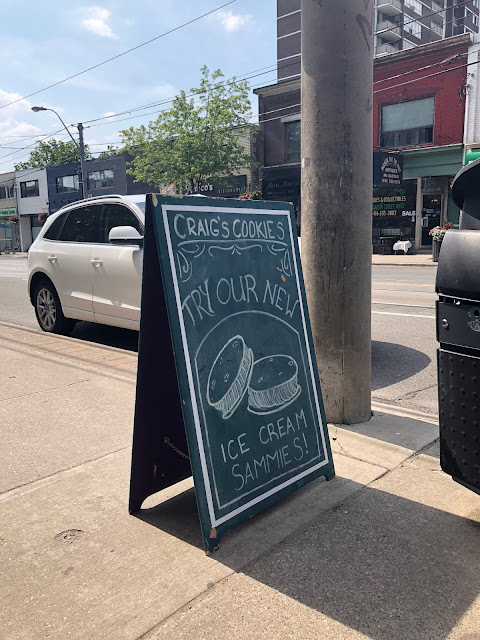 Q picked out the Pride cookie with the rainbow chocolate balls (and I enjoyed the other half). 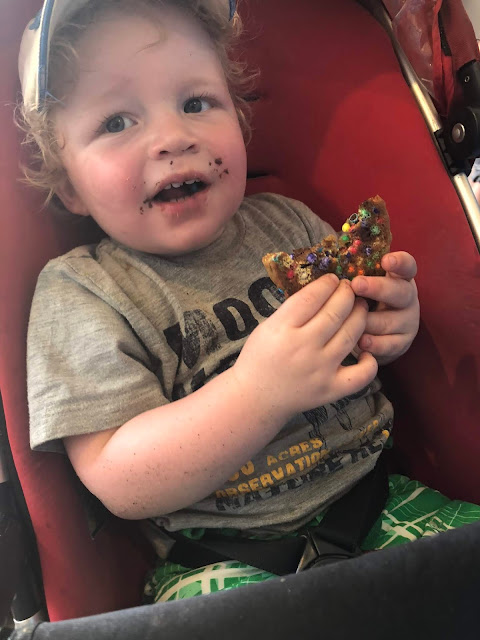 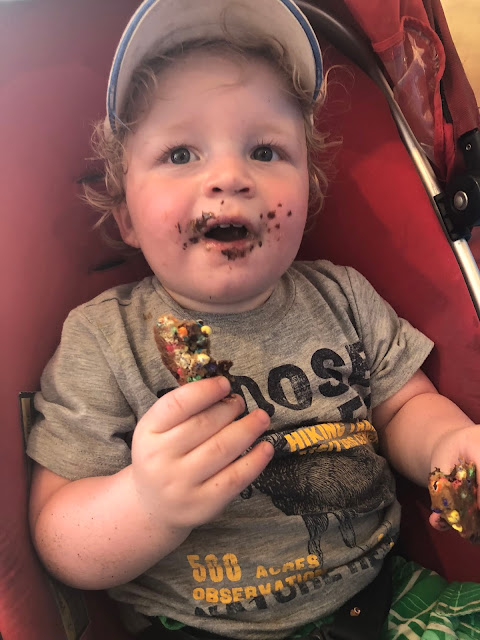 The owner is from Newfoundland and has this photo gallery of NL photos and drawings. 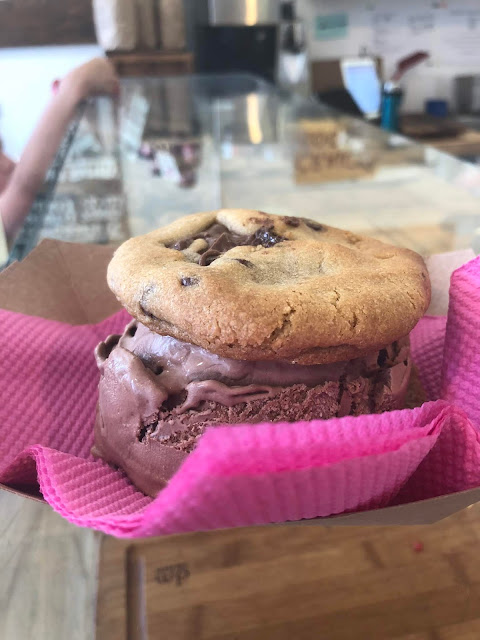 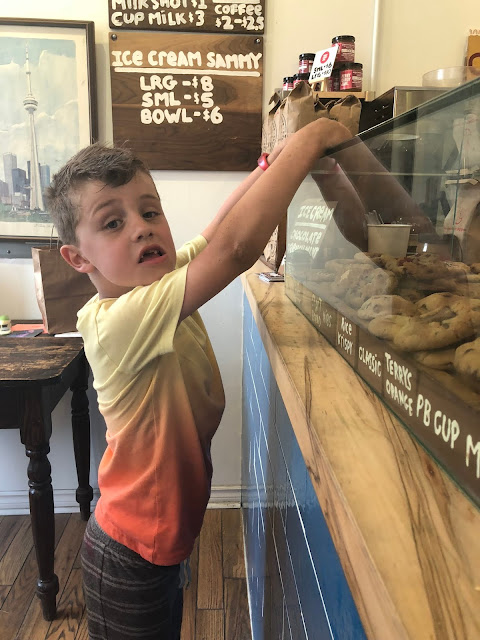 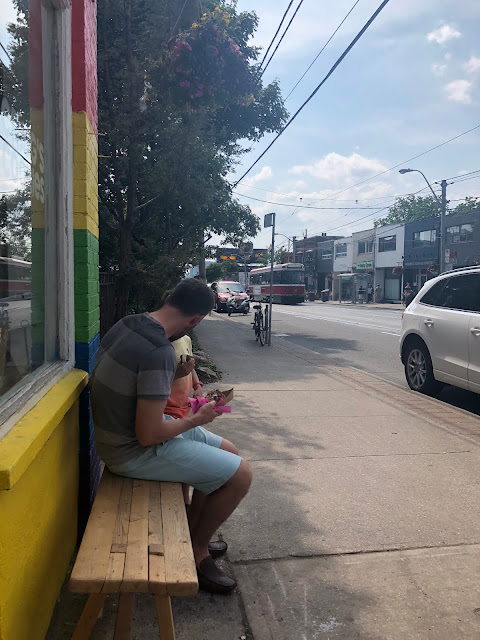 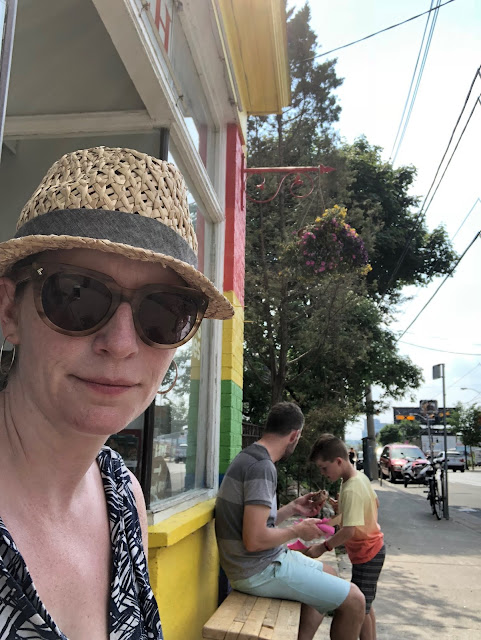 Pit stop at McDonalds before going home.  Queen and King. 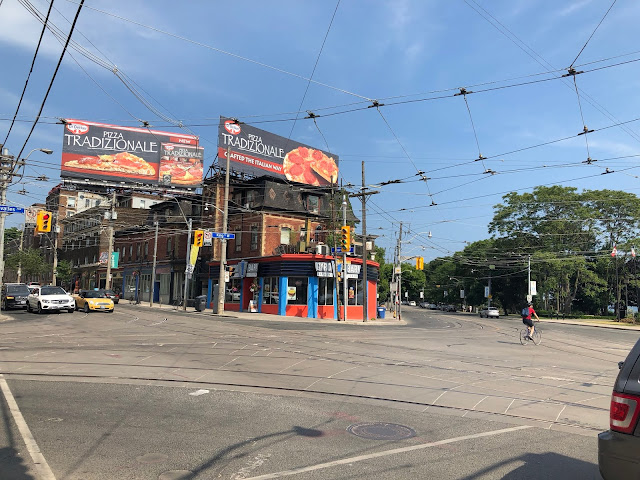 We set up the sprinkler when we got home so the boys could clean themselves up and cool down.  A shower was a welcome sight after that long hot day, but we enjoyed ourselves.