Today's topic is how we talk to our kids about adoption (because the ladies who host this link up have both adopted children from China).  This is not really relevant for us since no one is adopted here and we aren't considering adoption.  So instead I'm writing about how I talk to my kids about everything.

I remember walking around the block with E in his carrier when he was only a couple of weeks (days?) old and talking to him about the leaves changing colour and I realized "he doesn't know anything, like anything about anything!" and Dave and I were now responsible for teaching him everything!  So in that moment I started telling him about photosynthesis and the reason why leaves change colour in the fall.  And I had another realization is that I don't know everything and although I get the general concepts, I have forgotten some details, but if I was going to be teaching someone about something I should probably know more.   I can't know everything (although I sometimes tell E that I do) but I also can't make stuff up.

I have always tried to speak to my kids as humans, not babies, and I will choose my words carefully but I don't dumb it down too much. I tend to launch into a prolonged explanation of something, and perhaps give more details than necessary, but I think it is a good approach.  Whether it is something complicated like "what happens when we die?" or simple, I try to be considerate in my answer.  And if I don't know the answer, then I say that I don't know, but we can look for the answer online or in a book.   I know they are listening and often E will repeat something back to me even weeks later, and I know he got it.

It's not just when they ask questions, but I look for opportunities to explain things, and try to give as much background as I can.  And I ask questions of them and see what they already know, rather than just putting words in their mouths.  I also try not to say they are wrong, but rather that there is more to the issue and go onto explain it.

I'm hoping their curiosity continues as they get older and know that we can talk through their questions and find the answers somewhere even if we don't know them immediately. 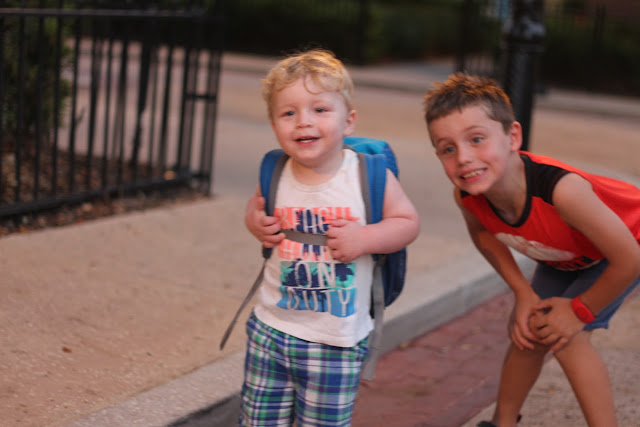 Linking up with Shay and Erika today.
Posted by TorontoSAM at 6:00 AM

Labels: How We Wednesday, Kids