Our Friday night started off with a lot of excitement.  My friend Jonathan, from law school, was on Jeopardy!  And (spoiler alert) he won!  I was so nervous watching him but he kept his cool even though he got off to a slow start.  I love that Alex referred to him as a "professional curler"; we played on a team together in law school so I guess that makes me semi-professional...? 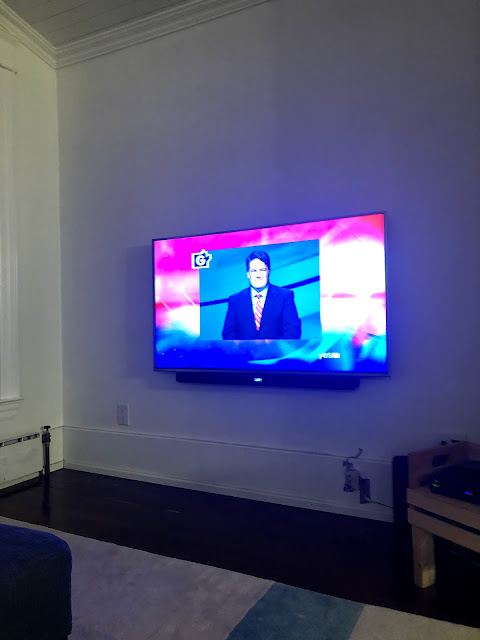 E was into it too! 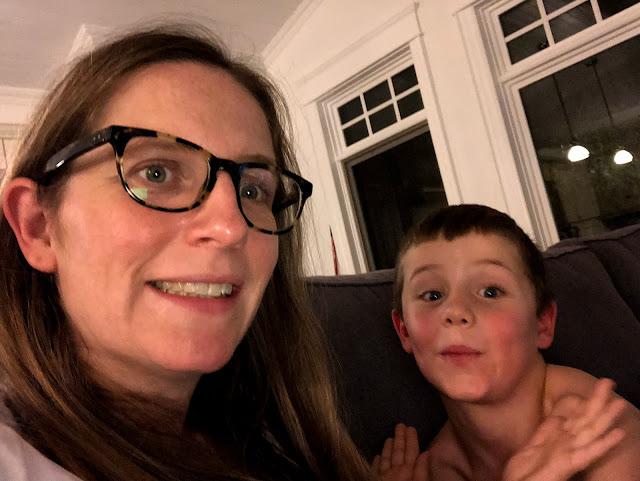 After the kids went to bed, we finished off The Haunting of Hill House. This is a Netflix show they borough out just before Halloween.  It was so good!  I don't typically go for scary movies, but this was also a bit like "This Is Us", a story of a family hopping back and forth between past and present.  The actors were so good and we really enjoyed it.

On Saturday morning we headed out to Shoppers to Dave and E could get their flu shots (Q and I got ours at the doctor's office a couple of weeks ago).  After Q rearranged the kids book selection and then hugged all fo the Christmas stuffies, broke out some Paw Patrol while we waited. 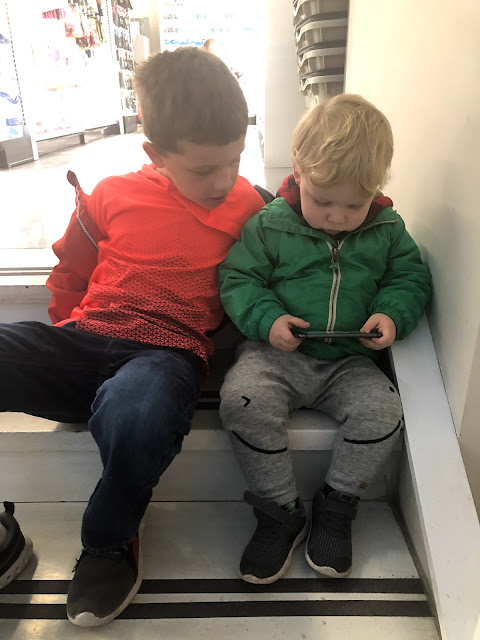 Then we went to Mastermind Toys.  E had his birthday money to spend and we also needed to get a gift for a birthday party next week. 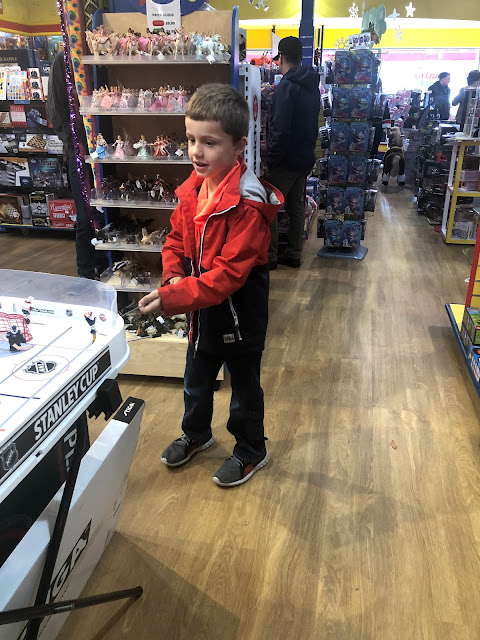 We went home for lunch.  Q had a short nap, Dave went for a run, E did some reading practice, and I made muffins.   It was kind of grey so we didn't do too much else other than play in the basement and watch more Paw Patrol.

Just before supper Dave headed out to a party at a friend's house. 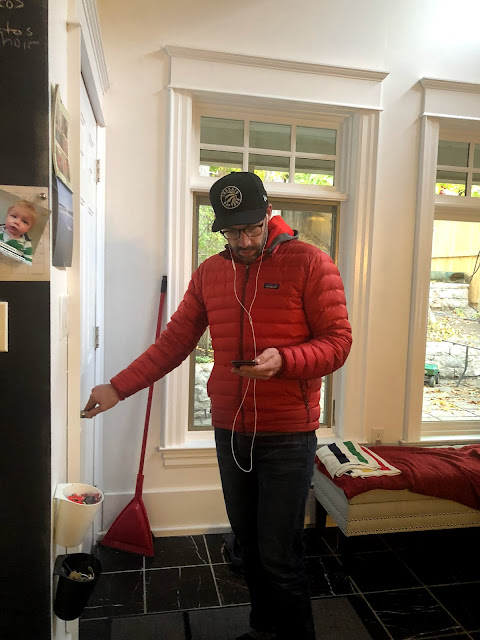 I made quiche and hash browns for our supper.  After Q went to bed, E and I did some work on his Lego.  He took my phone to take a few photos... 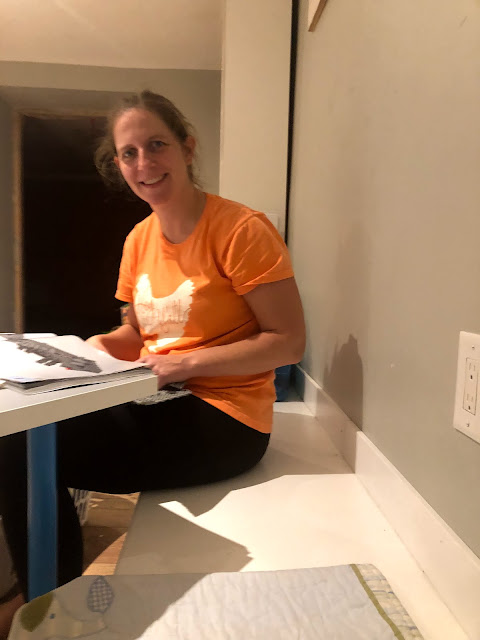 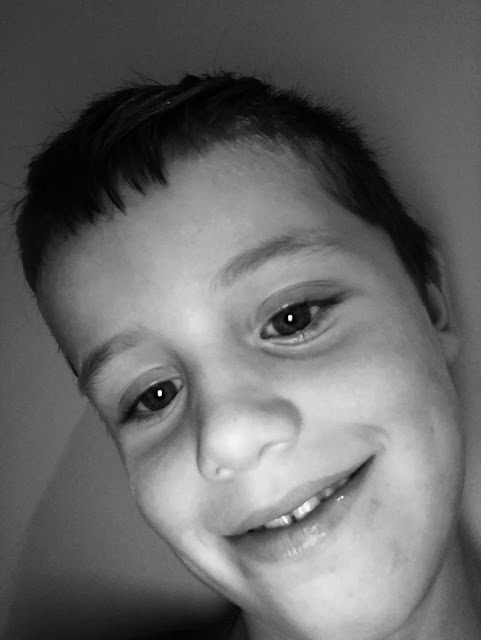 (this is our new set up in the basement) 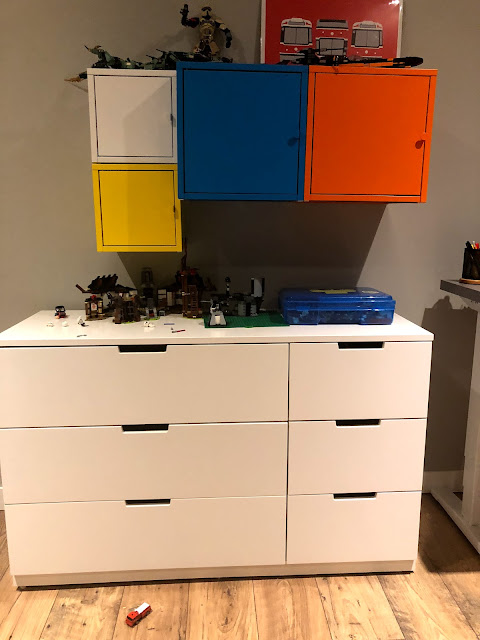 He set up this battle to photograph. 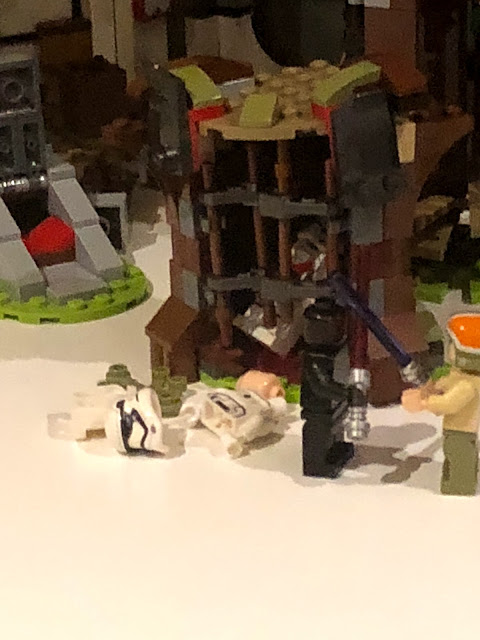 I caught up on This Is Us before going to bed late.  I am one of those people that stays up later when we put the clocks back, rather than just get the extra hour of sleep.

We had sunshine on Sunday which was so nice.   The boys and I went to church.

If we leave this pumpkin out long enough, the squirrels will get rid of it!  They only seem to like this one though, not the others. 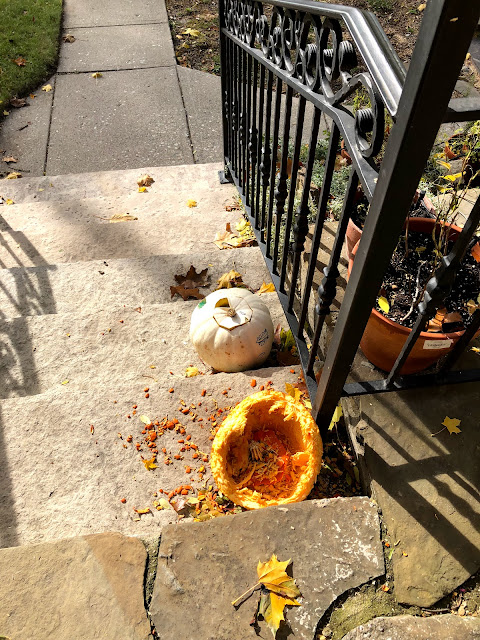 I got groceries after lunch, helped E with his math workbook, and then we went for a little walk to get a coffee and play at the Catholic school playground.  Unfortunately by the time we made it outside the sun was gone and it was a little chillier than it had been, but still nice to get out for some fresh air. 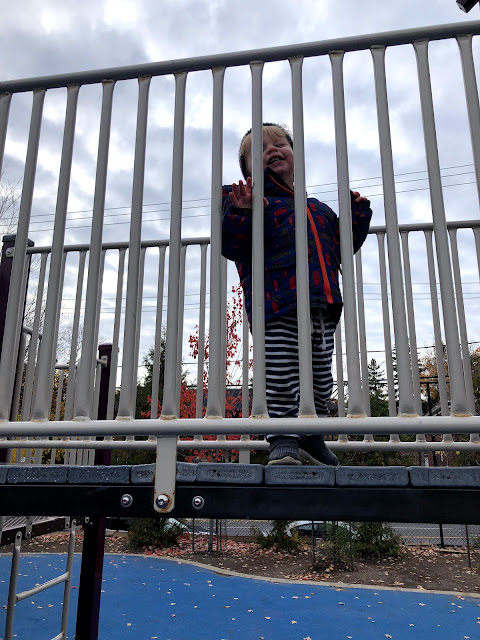 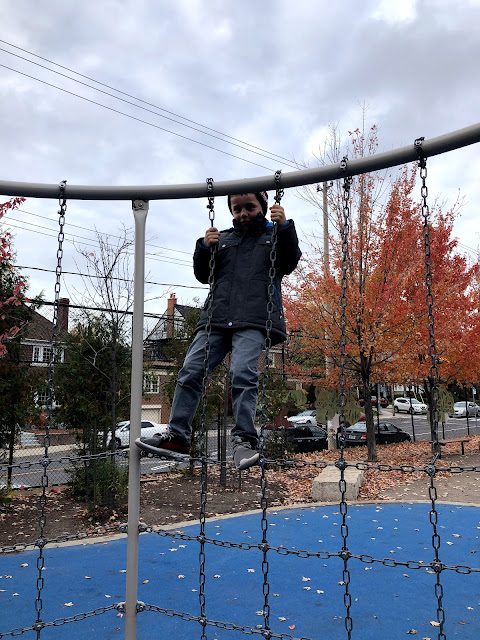 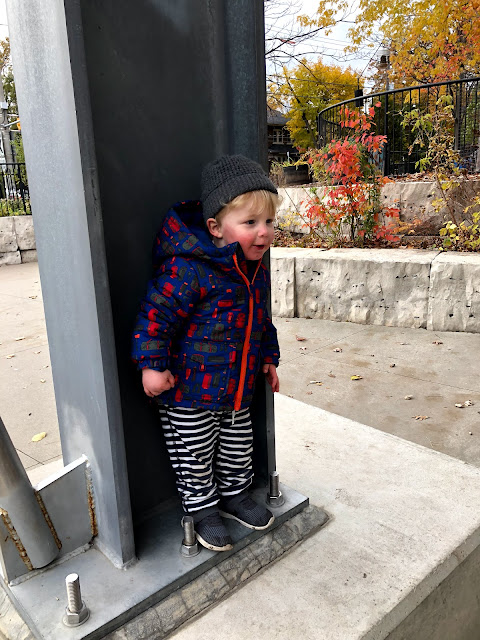 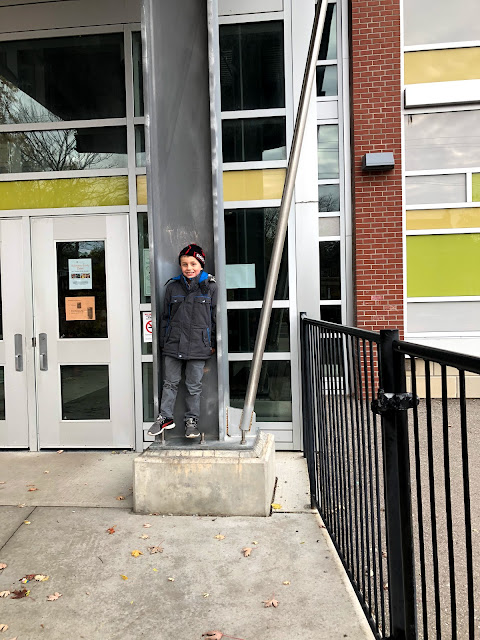 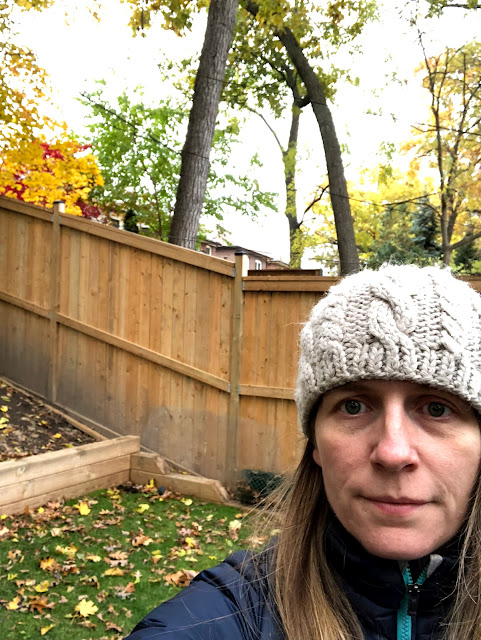 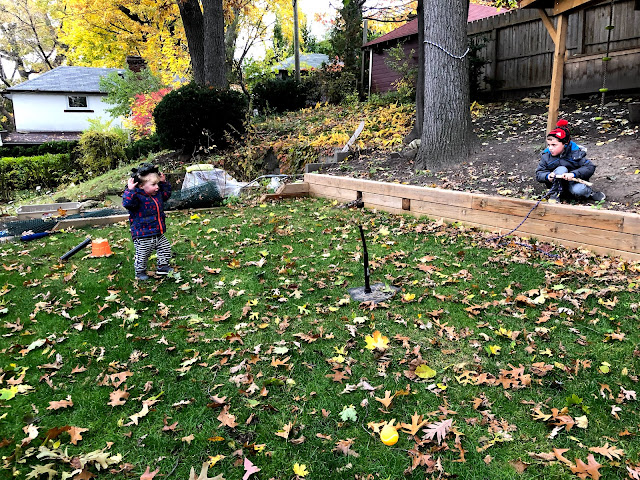 Trying to wear Dave's old catcher's mask, but it's just too big and heavy for him. 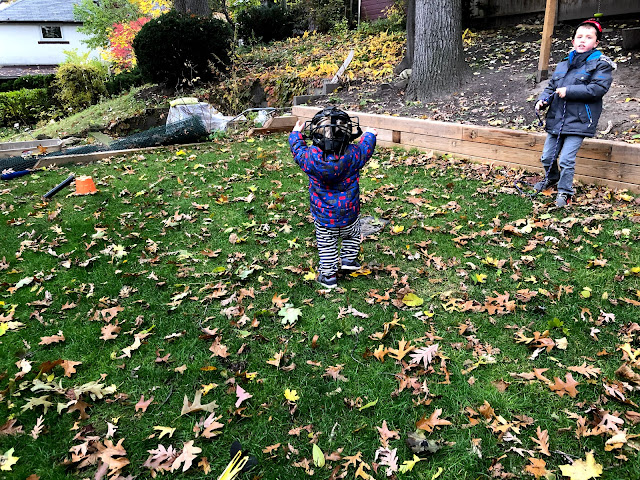 We had one of my favourite suppers - lasagna, caesar salad, and garlic cheese bread.  Not pictured the nice bottle of Malbec that Dave's aunt brought us from BC this summer. 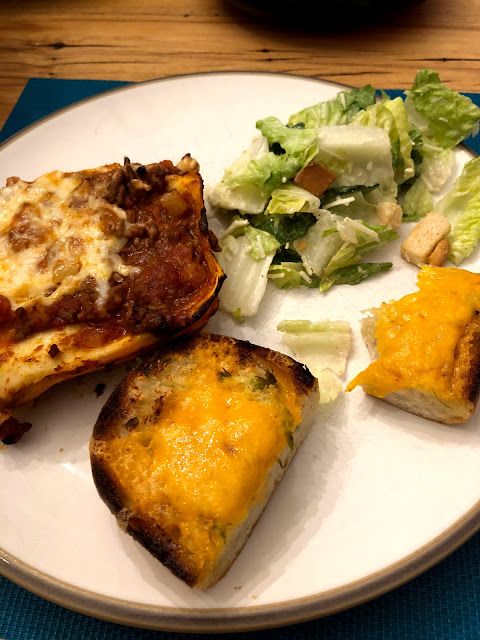 I only had one glass though, because I was heading to yoga.  I did have more when I got home though ;)

Our event filled weekends start up next week so this was a nice one to just hang out and have no set obligations.