As part of my goal to try new things this year, I introduced a few different things to my diet that have stuck.

Spaghetti Squash.  I used to scoff at the people who would eat spaghetti squash instead of actual spaghetti, but then I tried it and it was so yummy.  It's not pasta, so don't think that it is, but it is a good substitute and I do feel better after eating a plate of this instead of regular noodles.  We have used it for pad thai and also with tomato sauce and meatballs.

Oat bran.  I am a fan of oatmeal so I thought oat bran would be harder to make. Although I do use the stove instead of the microwave, it does not take that long and is a nice alternative to oatmeal.  E and Q love it too.  This is how I make it.  I top mine with sliced almonds, honey, coconut, and sometimes plain yoghurt. 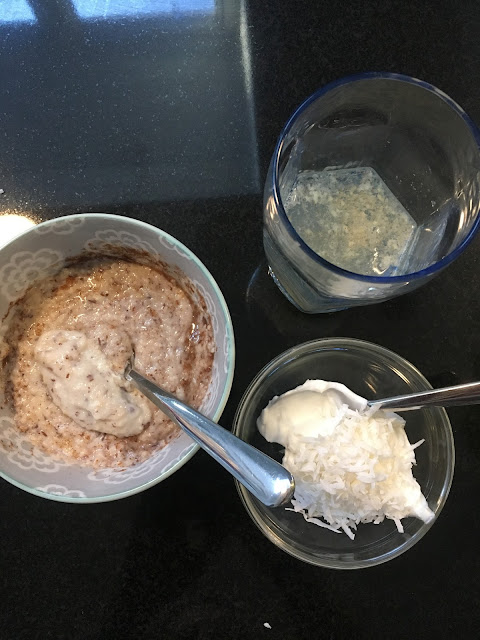 Smoothies with vegetables.  I have made smoothies with spinach but was never a big fan.  The recipes I use now include zucchini, celery, and cauliflower (I know right!). But they are delicious.  E has caught onto me now and always asks what it in the shake before he takes any, but I did have him fooled for awhile.  I like that I can add vegetables, and less sugar, into my breakfast.

Alternative flours.  I have used coconut flour, oat flour, almond flour, and spelt flour in various recipes and I love having the different options to add different aspects to our baking.  And it is even better that the Bulk Barn has all of these various ingredients!

Lemon (and ginger) water.  I know people have been touting the benefits of this for years, but I'm just now making it a habit.  I try to drink it most mornings or at night in hot water.