I had an exciting Friday night, first I had dinner with my friend Janna at Cafe Landwer.  We both had good meals and caught up. 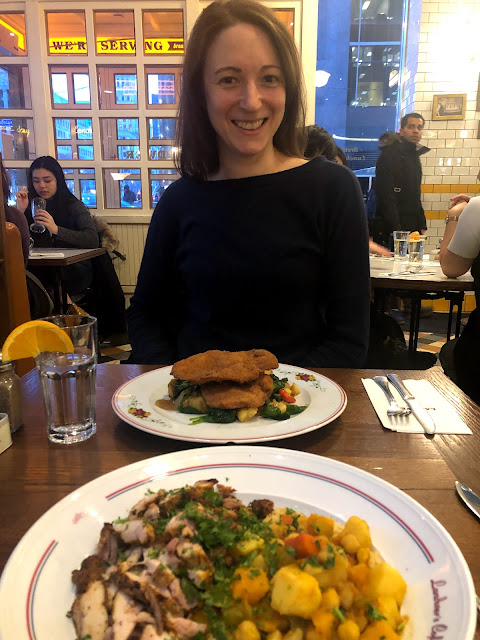 Then I walked down to the Raptors game.  My seat was in a Gondola Box, and I was a guest of my office building's property management company.  We were high! 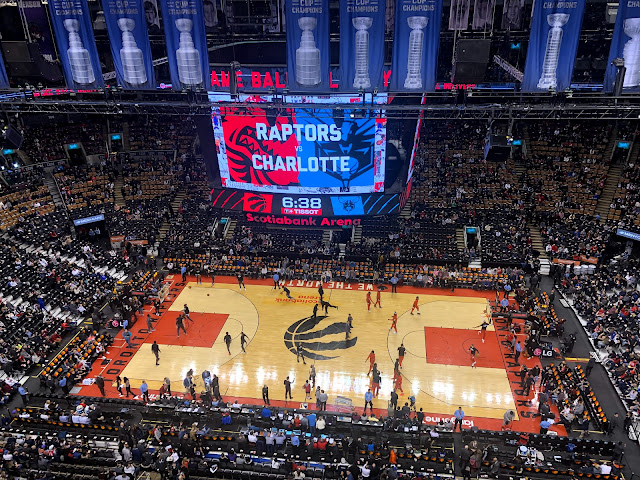 I was full from supper which was probably good since there was a lot of food that I didn't really need to eat, but I did enjoy a few Coors Banquets, popcorn, and some shrimp. 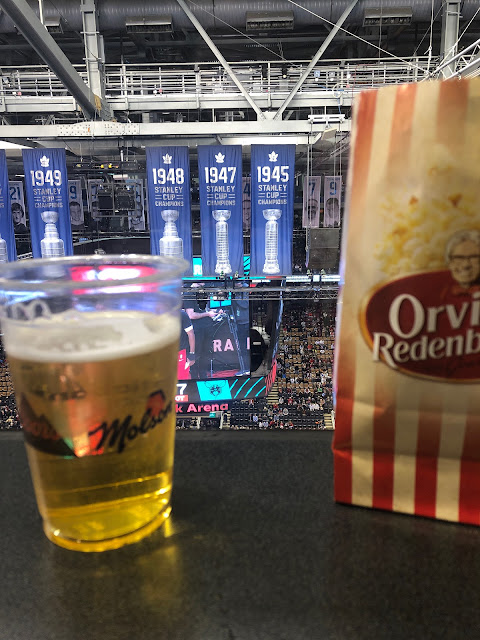 The Raptors lost but it was still fun to be at the game!  While I was gone, E went to a friend's house to play and Dave and Q watched Frozen.

On Saturday morning, Dave took E to his t-ball assessment.  It's not tryouts since he will be on a team, but they want to sort out the skill level of the players so the teams aren't stacked.  Meanwhile I took Q out to shop.  First stop was Sweet Potato for a few speciality items like soba noodles and spelt bread.  Q enjoyed the free apple :)  We saw a neighbour there and then a friend of Q's from daycare at Loblaws. 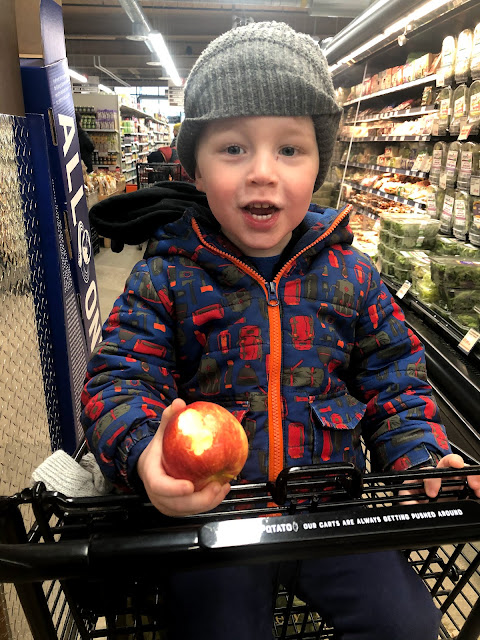 In the afternoon we went out sledding. 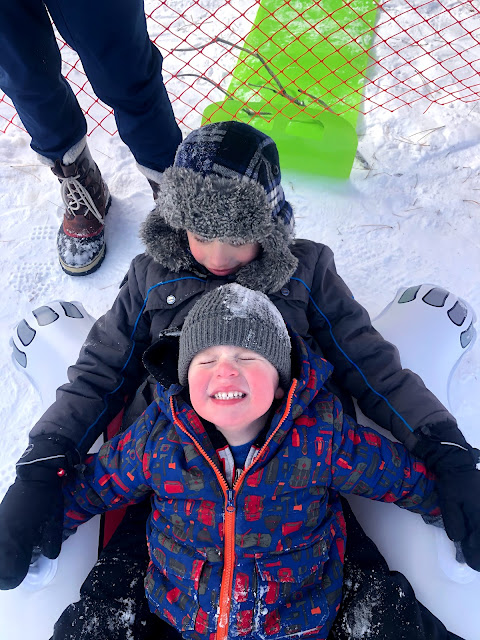 And it was pretty successful until the last run when our polar bear ran over some sharp ice and popped :( 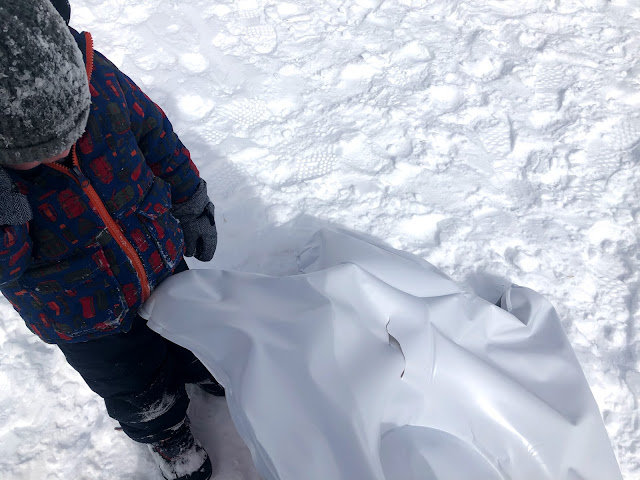 Hot chocolates and coffees when we got home 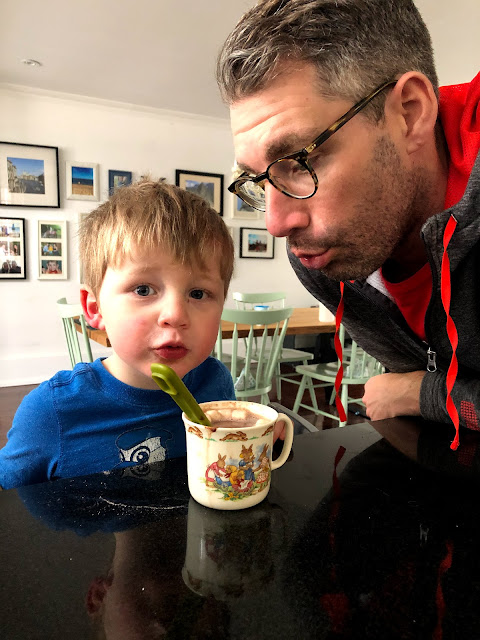 (and curling in the background) 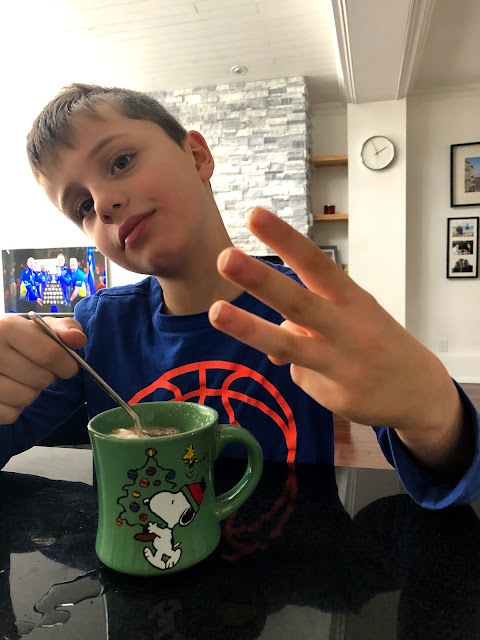 Chess for Dave and E 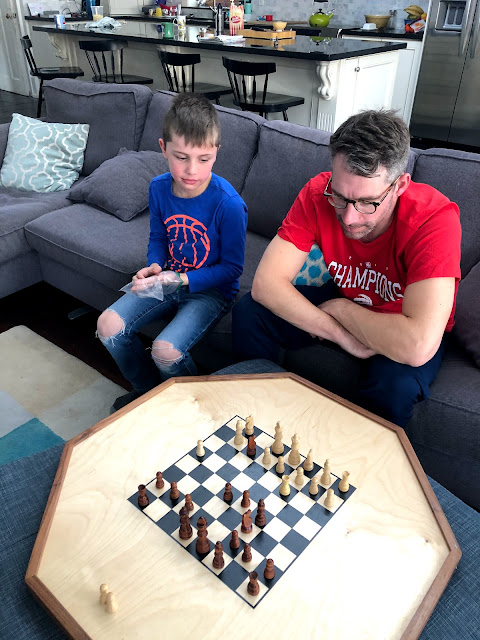 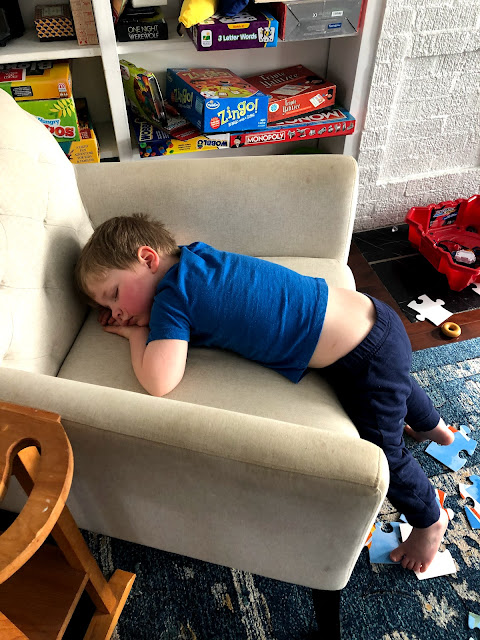 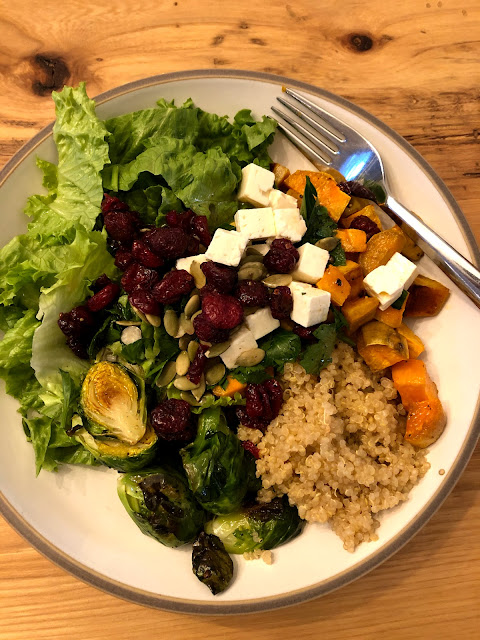 We went for a walk after supper to enjoy the evening light (however short-lived). 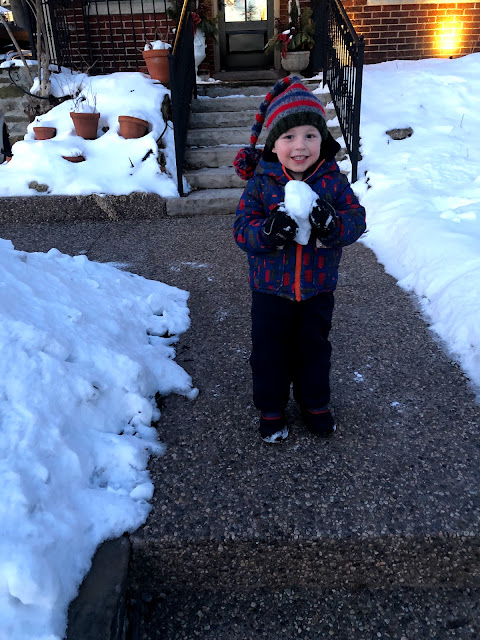 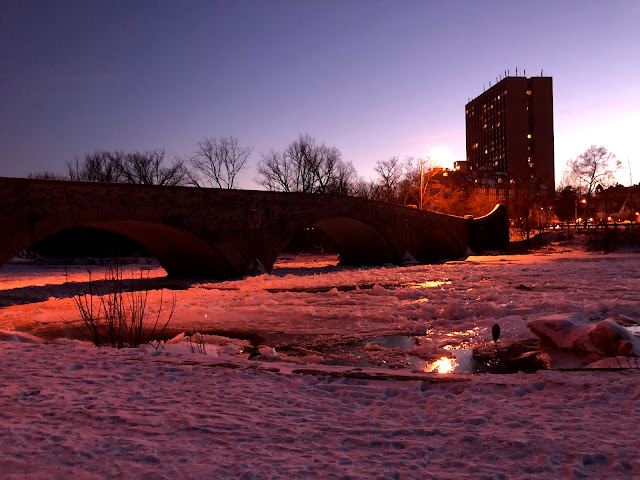 We watched some Harry Potter before the kids went to bed. 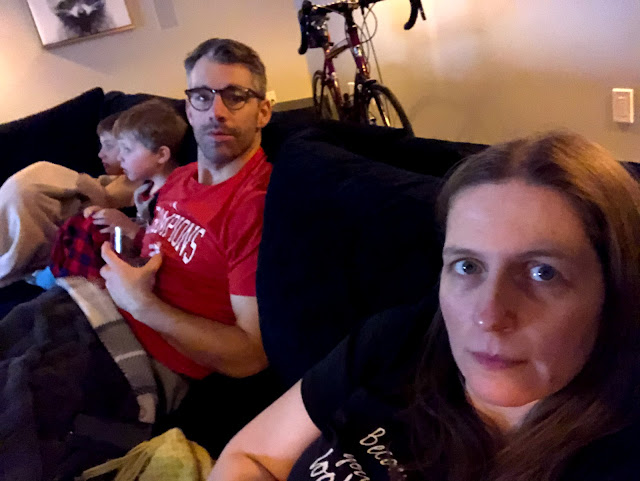 I liked these guys creeping in the background. 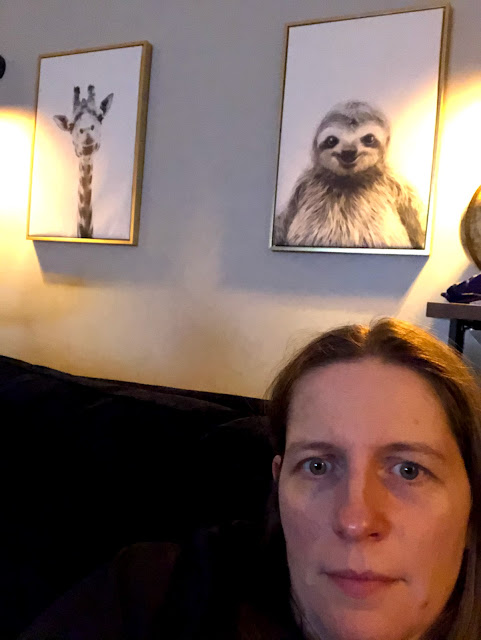 On Sunday we went skiing, it was such a beautiful day.  Lots of fresh snow and the sun was out making it wasn't that cold. 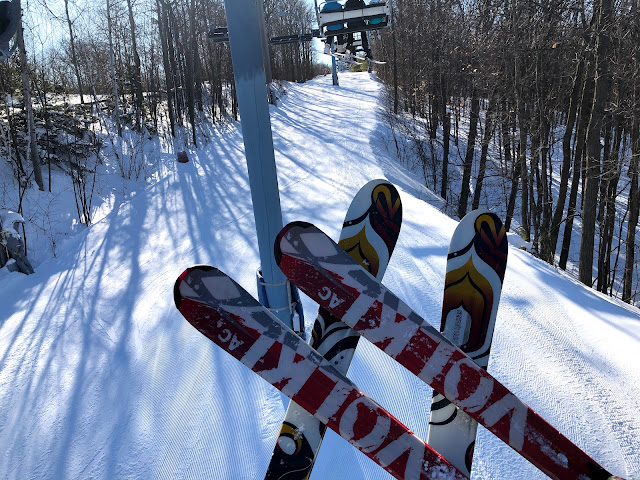 Q was at the top coming down on his own at his lesson.  He had such a good morning. 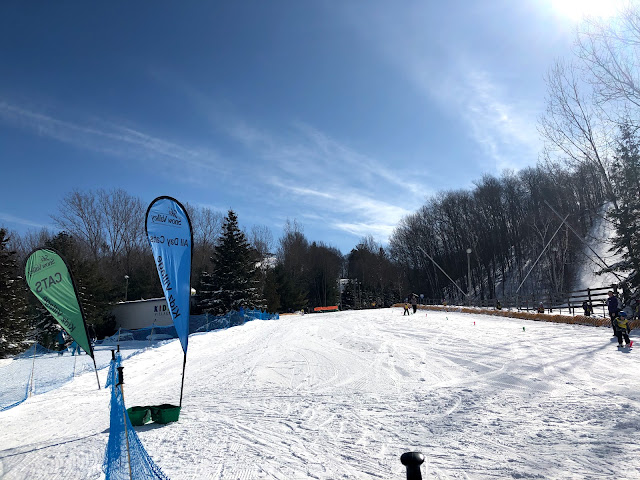 Then we all went up on the chairlift together. 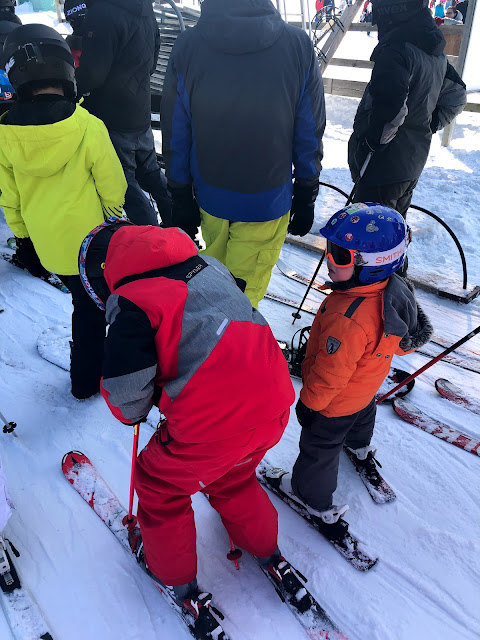 It was so busy so we decided to leave instead of doing a few terrain park runs with our friends like we usually do.  Donuts on the way home :) 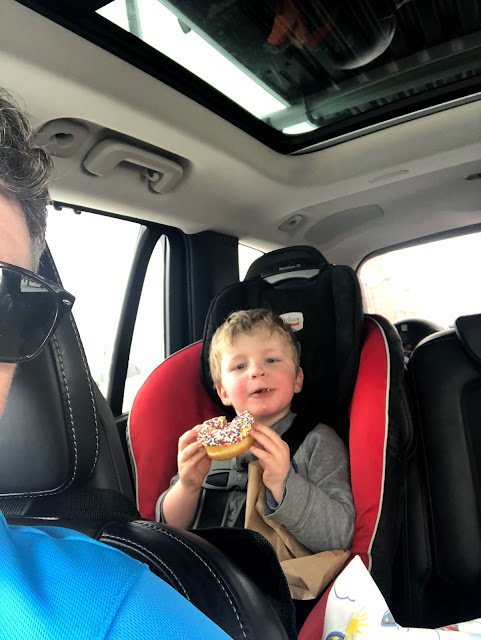 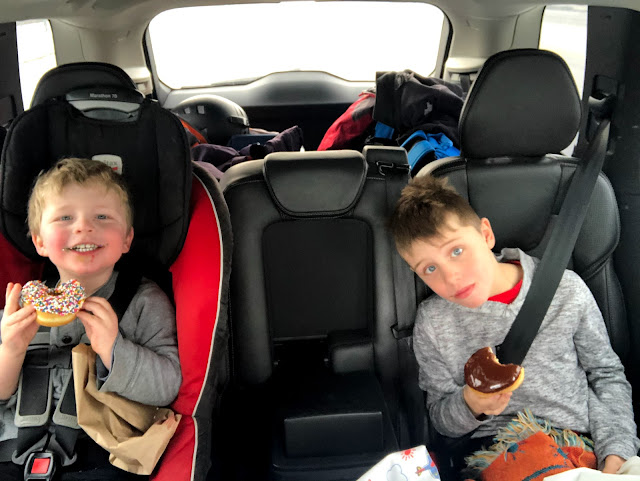 We got home, unpacked the car, had supper (baked beans and crusty bread), E had some friends over, and we watched the Raptors game and the curling.