Dave was away on the weekend so that meant I was in charge of mowing the lawn on Friday.  Sadly I found this dead squirrel in the backyard.  It looks like a baby that probably fell out of the nest.  I left it there for the afternoon hoping someone (i.e. hawk or raccoon) would come by and pick it up, but no one did, so I had to dispose of it myself. 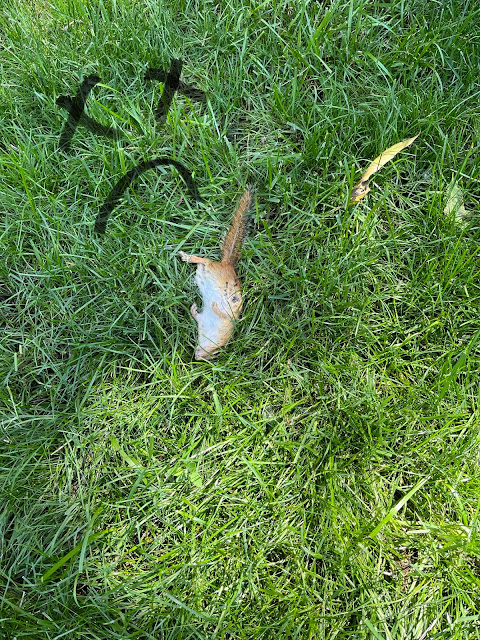 Saturday morning was our usual ball hockey for Q and baseball for E.   I dropped E off at baseball and stayed with Q at ball hockey and then went back to see the end of E's game.  This is me at hockey, note the wet shirt where I spilled my coffee and then rinsed it out with water. 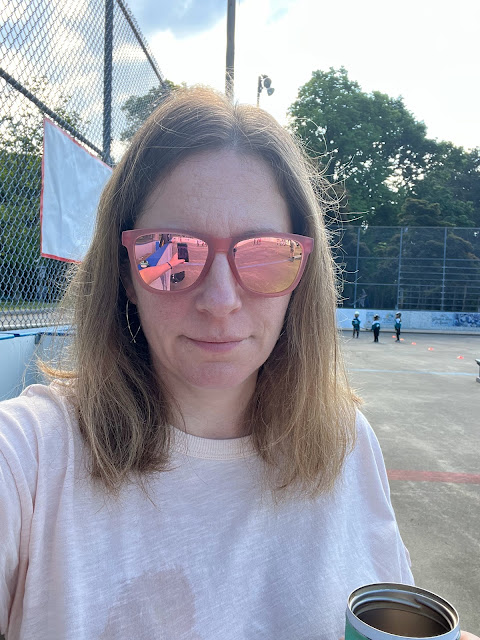 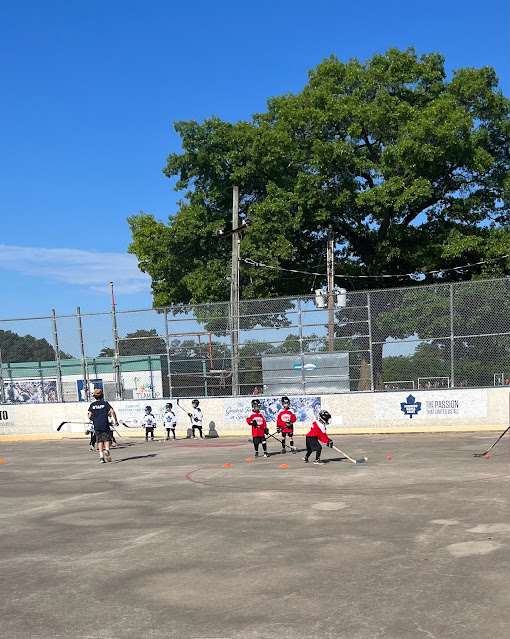 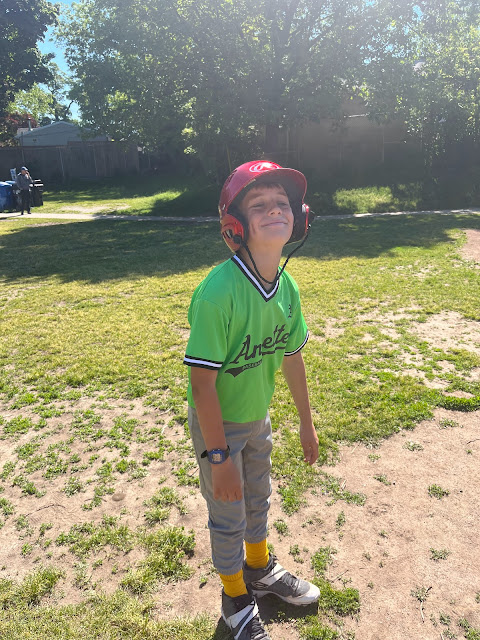 I bribed the kids with Booster Juice so they would come with me to do a few errands on our way home. Then I made myself a buffalo chicken wrap with the leftover chicken fingers. So delicious! 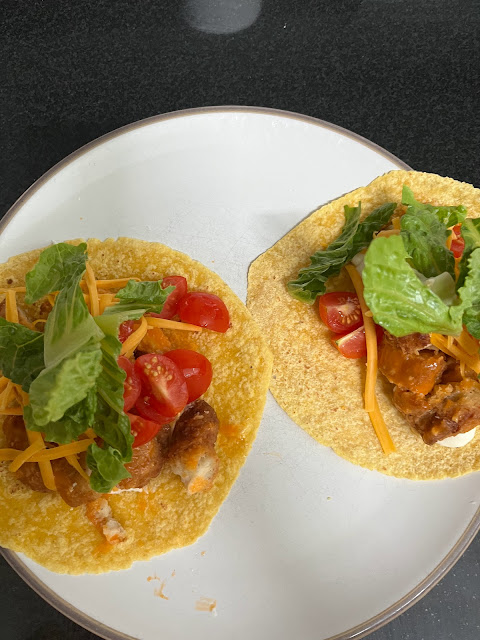 I did a quick Peloton ride after lunch and then spent the rest of the afternoon cleaning the house.  We ordered some pizza and ate it downstairs while watching The Floor is Lava. 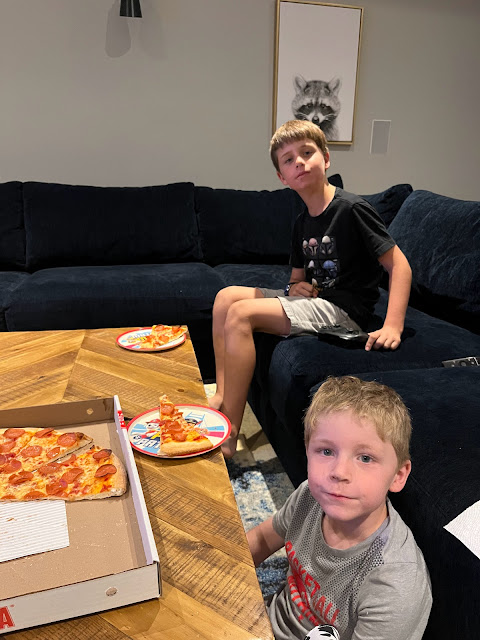 I have invited some ladies over for drinks in the backyard so I got everything ready for that. 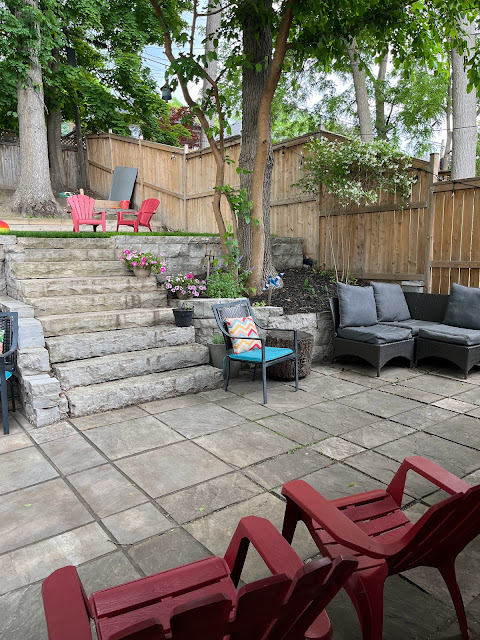 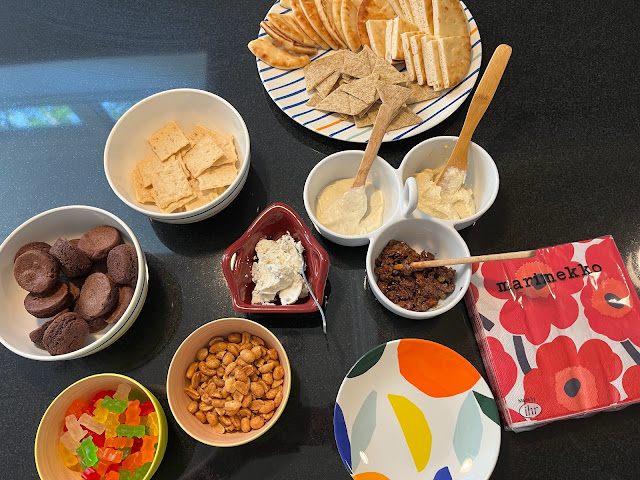 My new dress from Simons. 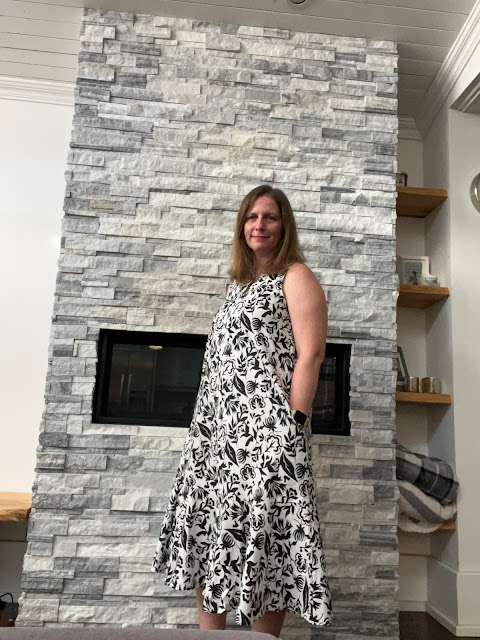 It was a late night on Saturday but it was nice to have people over.
The next morning the kids watched TV and played games while I watched the F1 race on my phone.  Dave's parents arrived in the early afternoon for a quick visit on their way down east.  I left the boys at home with them so I could return some stuff at the mall.  I popped into Nordstrom and had to buy a few things from Zella. 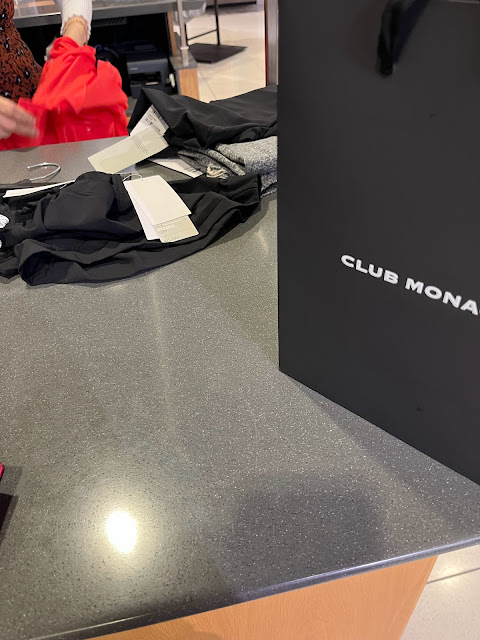 When I got back from the mall, the boys had set up a lemonade stand with the neighbours. 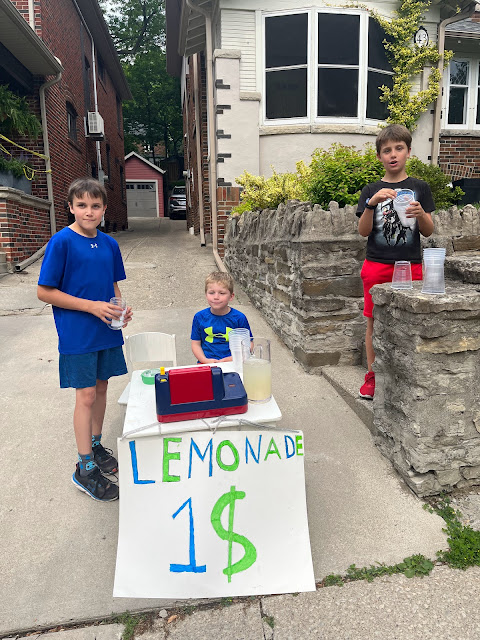 I had made ribs that were slow cooking in the oven all afternoon, so I finished those off on the BBQ and put together coleslaw and potato salad.  Everything was so good if I do say so myself! 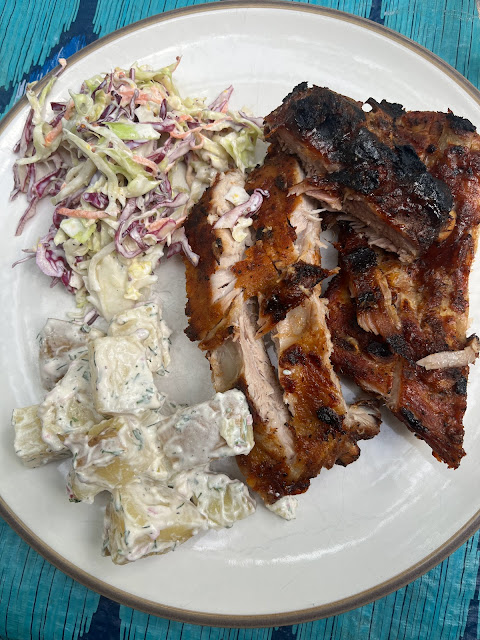 Cliff and Q were happy to be there, I swear! 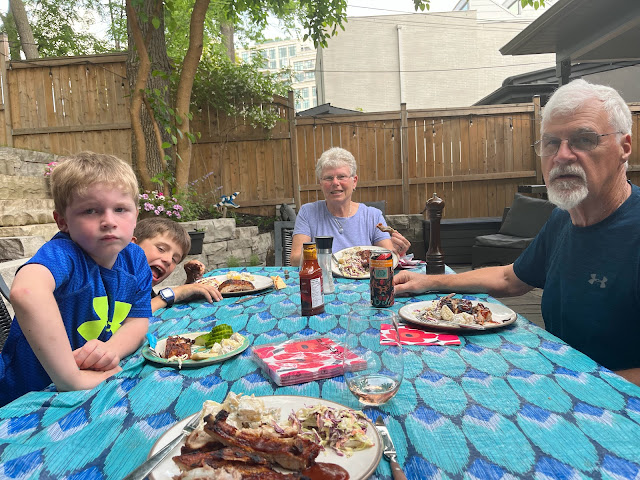 Showers for the kids, a couple of rounds of Mario Kart and then bedtime.  I watched an episode of Ted Lasso with Dave's parents but we were all tired so it was an early night for everyone.
Meanwhile, Dave was in PEI on his annual golf trip. They had amazing weather. 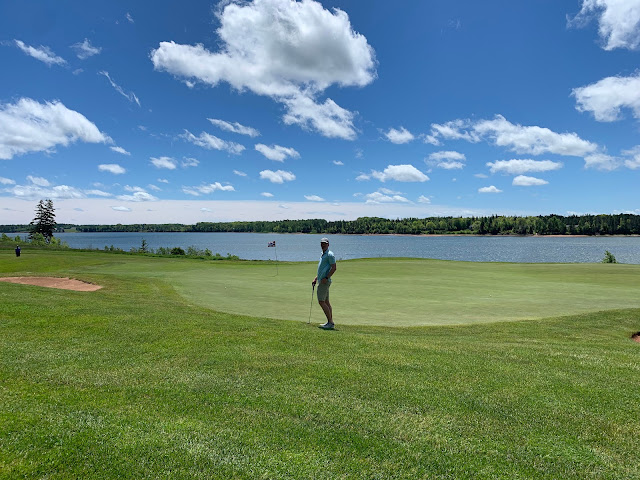 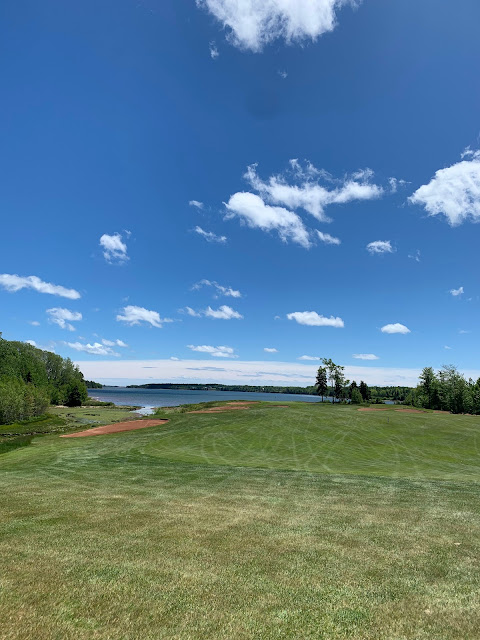 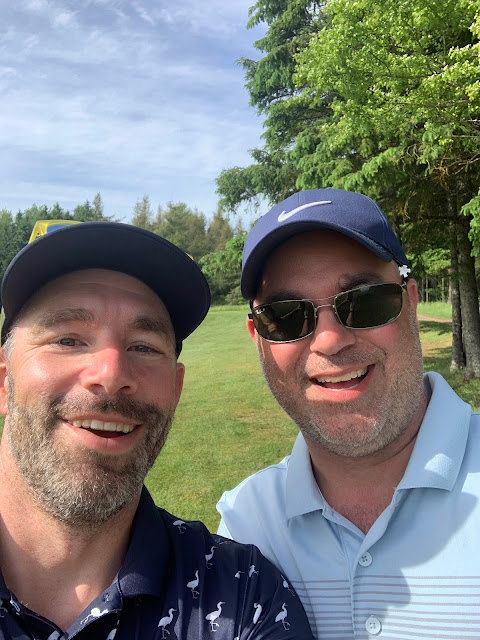 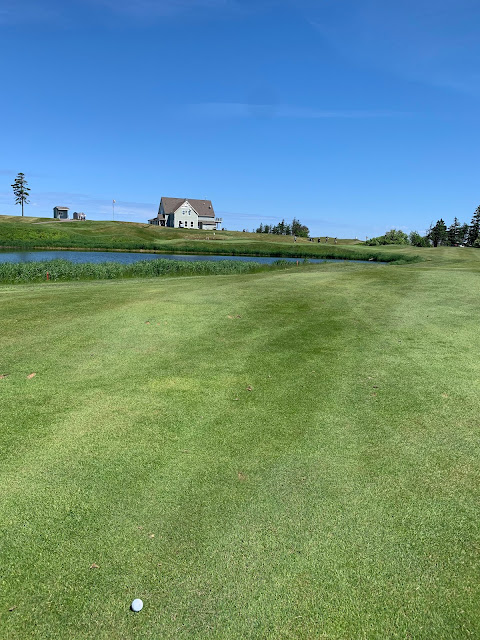 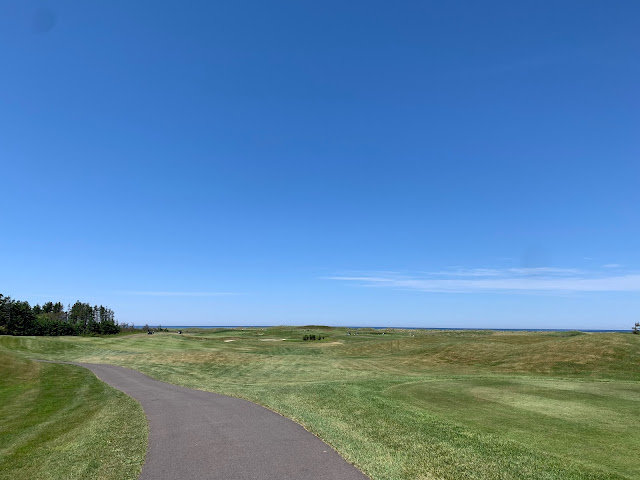 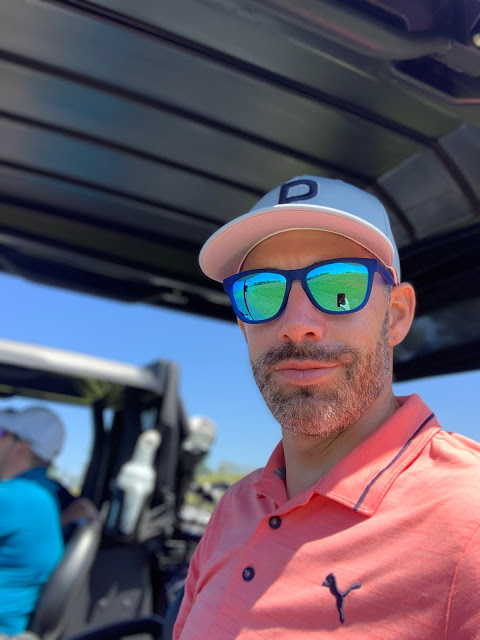