I started my Friday on the beach! My work did a garbage pick up at Woodbine Beach as a corporate event/community clean up type thing.  It was such a beautiful day.  I biked down, it took me about an hour, so that made my day even better.  After we finished up we had lunch at Mira Mira which was quite lovely, maybe the East side isn't so bad... :) 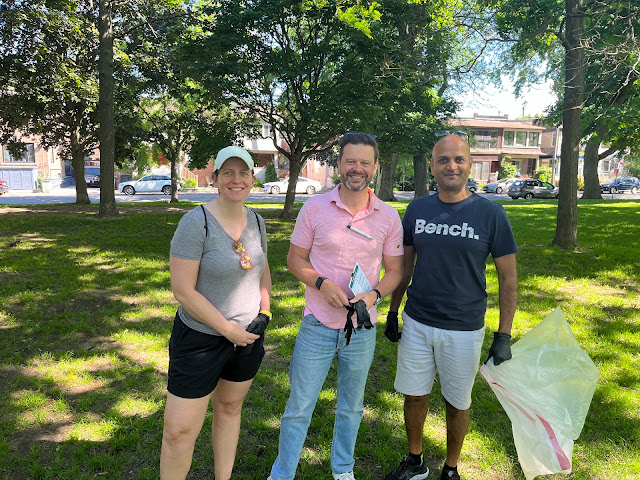 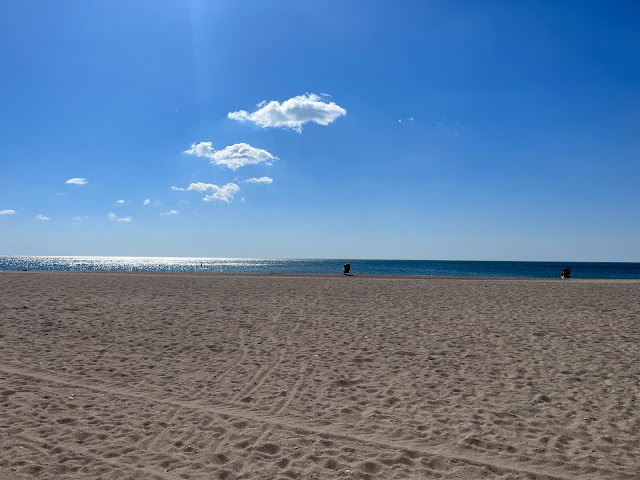 After my morning outside and my two long bike rides, I admit I was exhausted when I got home.  I did some work but I did need to take a nap!
Friday was Pizza Night and then we went over to our neighbour's house for a couple of drinks. 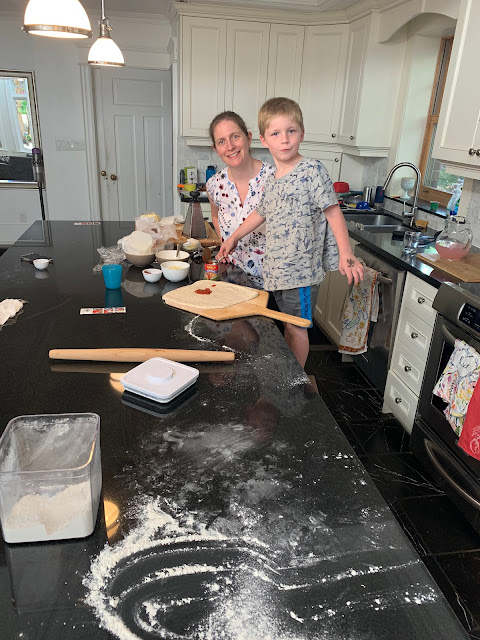 My pizza of the week - I went with the white base and fresh basil. 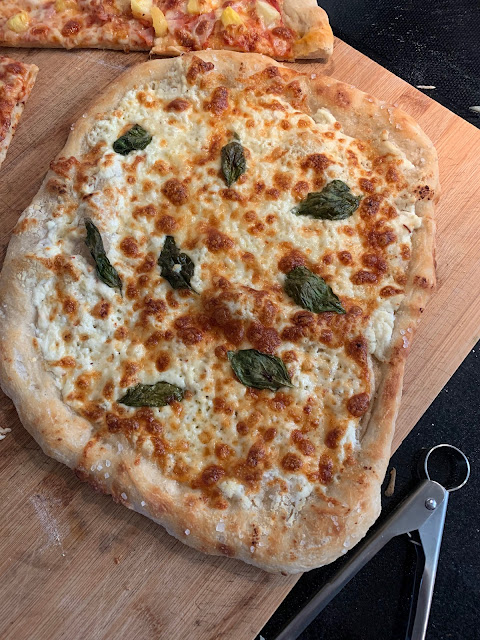 I got up for an early run on Saturday.  I have music downloaded to my watch now so I don't need to bring my phone, but of course this was the time I wanted it because as I ran down to the river there were three deer crossing the water, all lit up by the rising sun, but I could not get a photo!
Then it was ball hockey and baseball time. 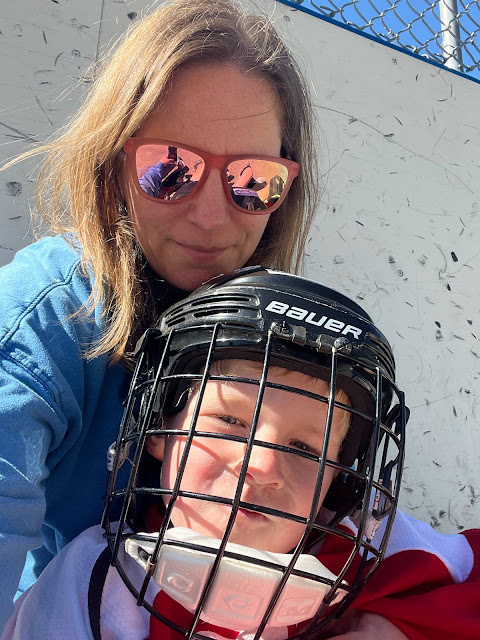 In the afternoon Dave had men's opening day at the golf club.  The boys and I walked up the street with our neighbours.  First stop was free cotton candy, we did not expect that, but its was being offered by the local Business Improvement Association. 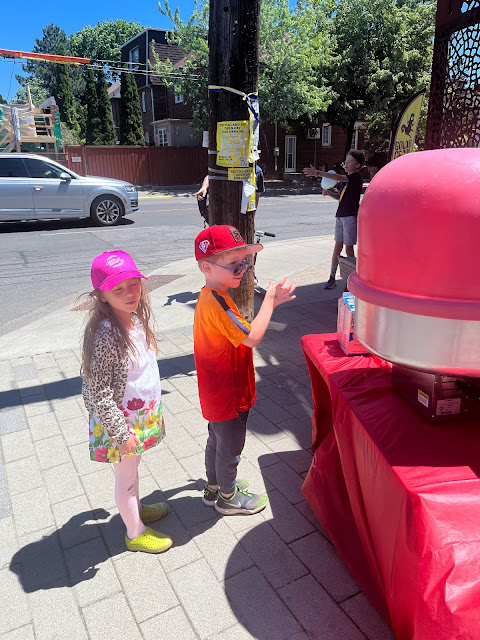 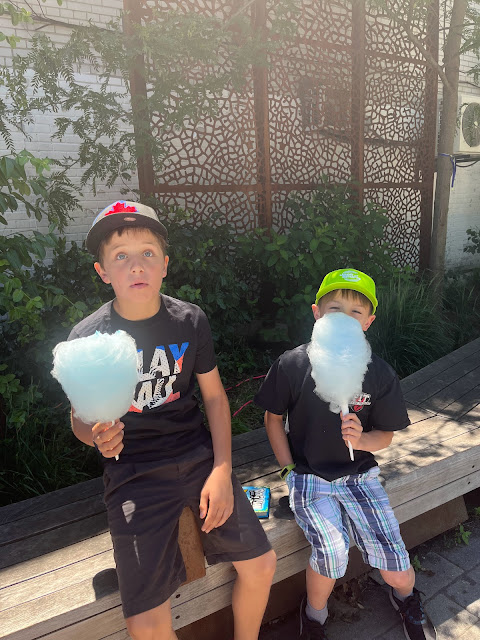 If you're keeping track that is two cotton candies in one week for these kiddos! 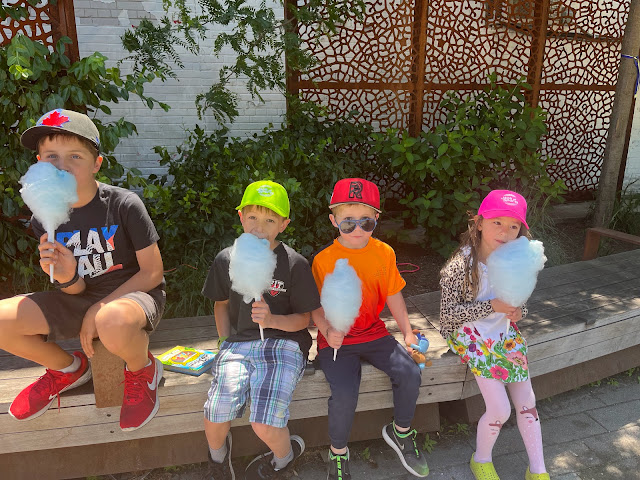 Then we got to see Dogman!  He was at Moonbeam Books on Jane. 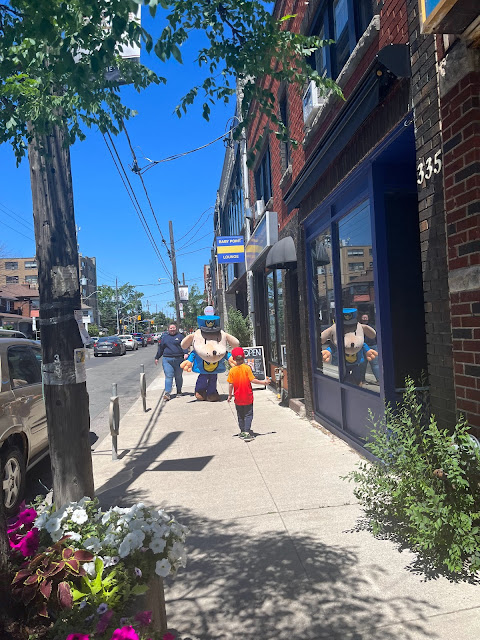 E brought his books and we have a little Dogman stuffy that we brought too. 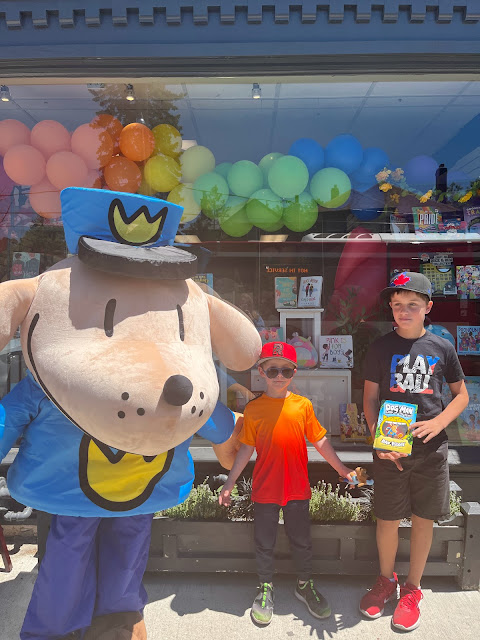 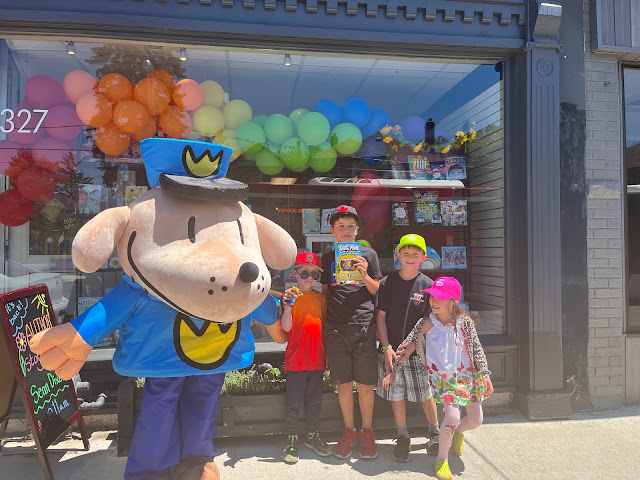 And then we went inside and picked out a few new books and toys. 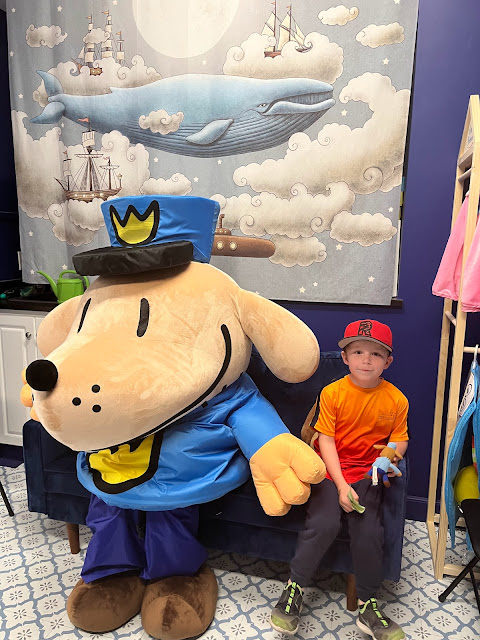 Next stop was the Golden Gecko for ice cream/doughnut/iced coffee. 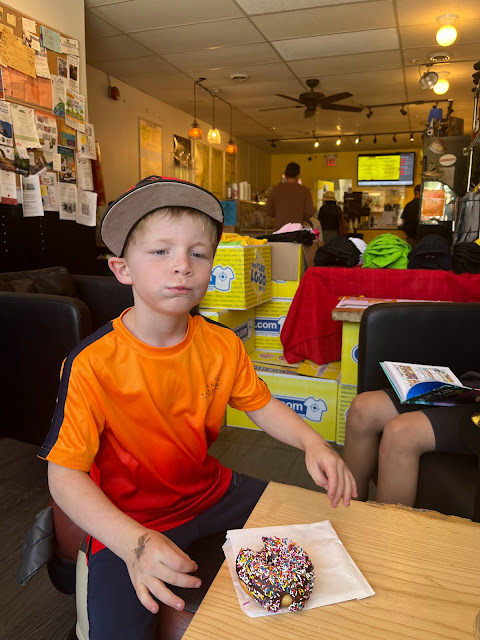 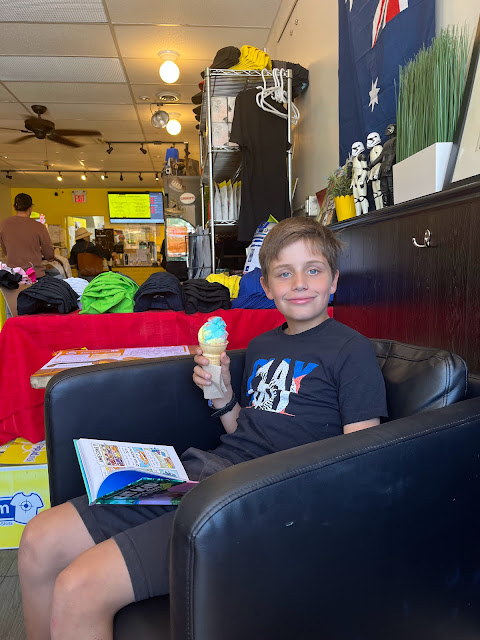 We stopped by the playground on our way home.  I got some groceries and then we had an easy supper and I tried to get the kids to bed at a decent hour.
The next day was Father's Day. Dave was not feeling very fit after his day and night at the golf club so I didn't get any photos of him, but we did have a nice morning.  We had some pastries and fresh fruit. 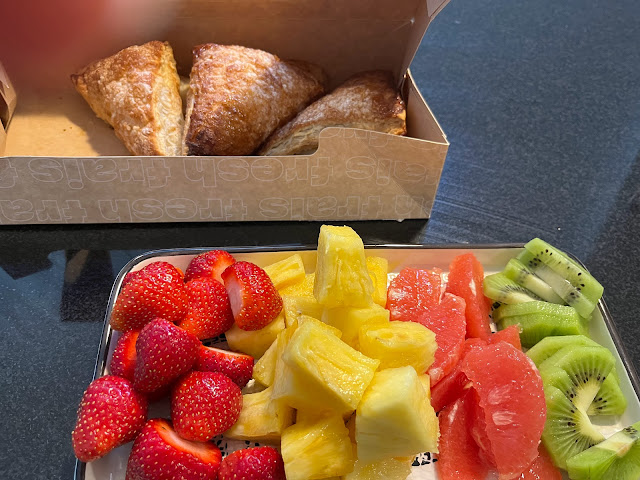 And a few gifts. 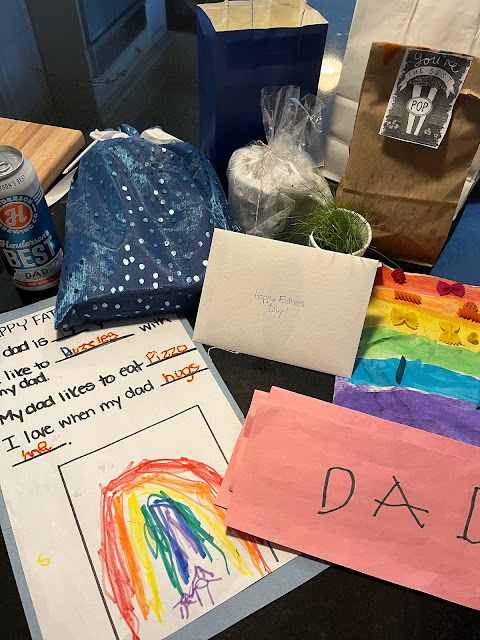 Our minister at church is retiring and Sunday was his last service so we went to church and the luncheon afterwards. 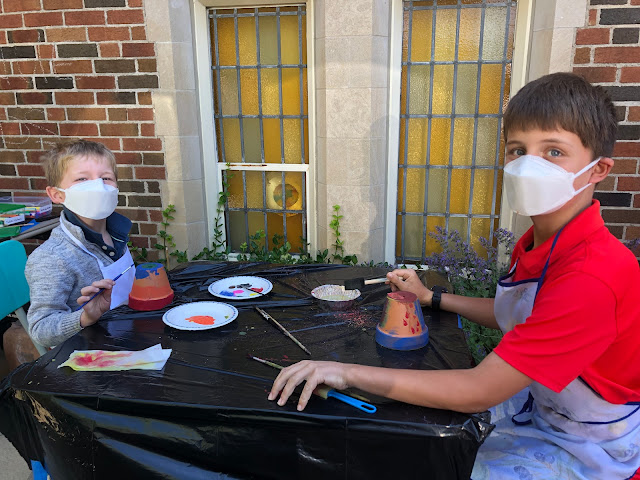 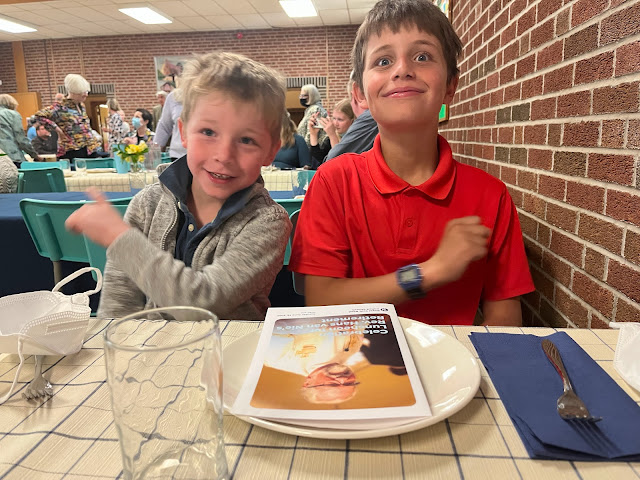 When we got home, we watched the F1 race from Montreal, then golf, and baseball. The kids did another lemonade stand. 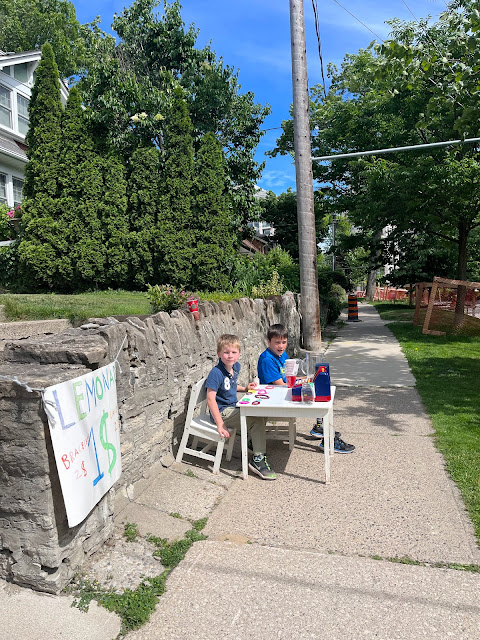 We had a charcuterie board in the afternoon and then went to the movies.  We saw Top Gun Maverick and it was just as good the second time (for me), no one else had seen it yet.  E said it was his second favourite movie ever (after Ready Player One). A bit of a late night for a Sunday, but a great way to finish the weekend.
Posted by TorontoSAM at 6:00 AM