A few weeks ago, in this post, I was complaining about the snack schedule for E's soccer team.  Mostly people have brought fruit, usually watermelon but we've also had pineapple and mango, and once we had popsicles.  My beef with the fruit is that there is always so much and there is no limit on how much the kids eat.  Our son tends to overeat when given the opportunity (actual quote of mine from his after-school program application), so he would eat all of the fruit if he could, and definitely eats more than he needs.  Because the parents are encouraged to leave the kids alone (and I am a rule follower even if most of the other parents don't obey), then I don't go over and try to stop him from eating everything, and the other parents don't care if he keeps eating, they just want to get rid of the food they brought.

So anyway, it was our turn on the snack schedule this week and I hemmed and hawed over what to bring.  I didn't want anything too complicated, but I wanted something different than more fruit.  I thought about buying some granola bars that I saw another team with last week, but I couldn't bring myself to do it.  I know they are harmless but I just thought I could do better.  I decided instead to make mini carrot muffins. 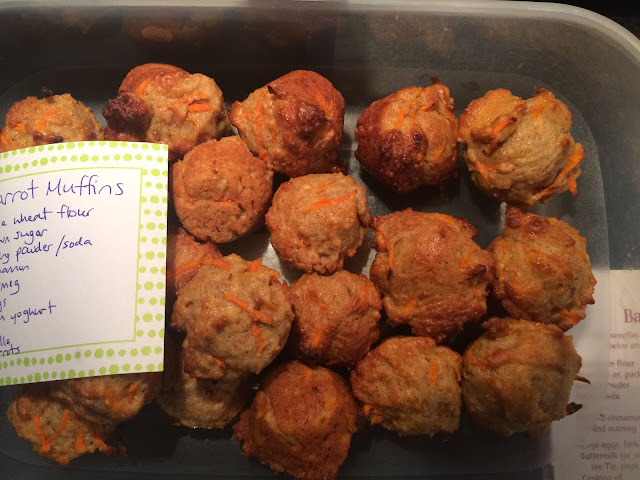 In no way am I trying to set some sort of impossible standard by which the other parents could never measure up, I just felt that I had time to make muffins, they are pretty healthy, and they are different than fruit, and so that's what we brought.  It also resolves my issue with overeating because I only put 20 in the container so the most a kid could have would be 2 or 3.

On the note of setting impossible standards, I read a great article this week that someone linked to on Facebook.  The article can be found here.  The title is "What it Means to Mother in the Middle" (really it should be called "parent" in the middle but then we would lose the alliteration).  Anyone, it describes me pretty well I think.  I am not perfect in everything I do, but if I can bring homemade muffins as our snack, then I will.

Here is the recipe for the muffins if you're interested:

Fill 12 regular muffin cups.  I used mini muffin tins and got 36 out of them.  Bake in a 375 degree oven for 20 to 22 minutes.  If you're using mini muffins it will take less time.  Start with 10 minutes and then check to see if they are done.  If not, then just keep checking them.

Remove from pan and cool in a wire rack.