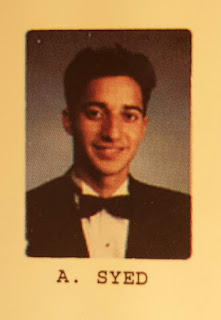 If you were fans of Season 1 of Serial and have followed the case since, you will know that Adnan is appearing in court today.  A few months ago the judge granted the motion to go ahead with this hearing, calling it, "in the interest of justice".  His lawyers are going to present new evidence that was not heard from at trial, specially the alibi to be provided by Asia McClaine, and that incoming cell phone call records are not to be given the same weight as outgoing call records.  Since the prosecution built basically its entire case on the cell phone records, linking most of them to Jay's testimony, then it is possible this new consideration of the weight given to cell phone records would have changed the outcome.  They will argue that these records were misleading and should never have been admitted as evidence at trial.

I recently re-listened to Season 1 and I was left with the same conclusion that I had when I listened the first time - I just don't know!! I really can't figure out if he is guilty or not.  I'm not convinced that Jay was being entirely truthful, and there are some indications he was being led by police in his interviews, and that his counsel was chosen (and probably paid for) by the prosecutor, which is a serious conflict of interest.  If Adnan is guilty, then I don't think it happened the way that the state said that it did.  So does that mean he should be set free?  The way the criminal system is set up is that defendants are presumed innocent and it is the prosecution's job to prove guilt beyond a reason of a doubt.  When you actually look at the prosecution's case against Adnan, I don't think it was that strong and as a juror, I don't think I could have voted to convict him.  The problem with that position is that I am basing this on what I heard on Serial, not what the jurors heard in the courtroom.  Adnan's lawyer didn't even speak to Asia McClaine so there was not even an opportunity for her to be a witness and say she saw Adnan at the library at the very moment the prosecution said he was in the Best Buy parking lot committing murder.  Adnan's lawyer also didn't get her own copy of the cell records and failed to attack their viability.  Maybe she didn't so it because of strategy or maybe she just wasn't doing her job.  Think of all of the people in jail that haven't received proper legal counsel, should we go back and overturn their convictions?  If the prosecution is able to put together a case and there is no reasonable doubt, then the jury must convict.

But the other thing that always sticks with me is that Adnan maintains his innocence and I know that everyone in jail is "innocent" but his consistent position that he is innocent stuck with me.  So he's either completely innocent but extremely unlucky, or he's a sociopath, which I guess is also possible.

At the end of the day, this is a tragic story, a young woman died, and a young man went to jail.  Maybe he sent himself there or maybe it was truly a case of wrongful conviction.  In any case, the potential for both of these kids ended back in 1999.  While I was graduating from high school, this was going on in Baltimore.  I think that's why I continue to be so fascinated with this case.

We will see what happens.

For more information, you should follow @rabiasquared on Twitter.  This is the Rabia that Sarah Koenig of Serial spoke to in the first episode who has continued her crusade to free Adnan.
Posted by TorontoSAM at 6:00 AM