Narrative that switches between past and present. Check.

Our book club selection for this month was Requiem by Frances Itani.  It hit all of the things I look for in a novel and has easily taken first place for books we have read this year, and is in the top five of the books we have read over the years. 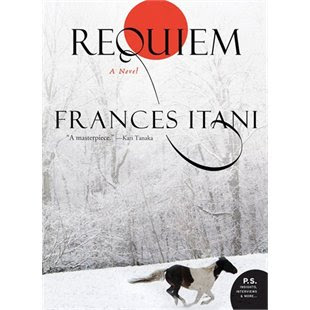 The story is that of the Japanese Canadians who were interned during the Second World War after the bombing of Pearl Harbor.  I think we all know this happened, but it was still shocking to read how these people were treated, most of them born in Canada with no ties to Japan, other than distant relatives, and how the Canadian government rounded them up and made them live like animals for several years.  It is shameful and although the government has apologized and made reparations, it doesn't seem to even out.  Although this is a work of fiction, the stories are taken from real people.  I actually felt that the stories were told in such a way that they seemed very real and couldn't have been invented.  That's kind of hard to explain but perhaps their simplicity made them seem true, had they been more elaborate, I wouldn't have believed them.

The story is that of Bin, the youngest of three children, who were sent away from the coast of British Columbia to live in an internment camp.  Bin is older now, and has just lost his wife to a stroke, and decides to take a road trip from his home in Ottawa out west, not quite sure where he is going.  He flips back and forth between his drive, times with wife and young son, and his time in camp and afterwards.

I found the book to be very emotional and got choked up many times reading it, particularly at the end when I was almost sobbing (not quite, I have sobbed while reading, but this wasn't as extreme).  The times when this happened were always when someone was kind to Bin.  The kindness really stood out to me in place (the camp) where there was a lot of suffering.

I read Snow Falling on Cedars in university (and saw its terrible movie), and it was a really good read, but this is way better (and Canadian).  Read this book, particularly if you know nothing of how the Japanese were treated in Canada during the war.  It is a worthwhile humbling lesson.