On Friday we ate up some leftovers for supper and then got to family movie night, this time the new Jumanji.  We all liked it and it helped that we had just watched the old one a few weeks ago since there were a few throwbacks to that movie in the new one.

On Saturday morning I went to my workout class; when I got back E and Dave went to get a couple of things for t-ball while Q and I did some stuff around the house.  He was taking a few minutes on the floor while I folded my clothes. 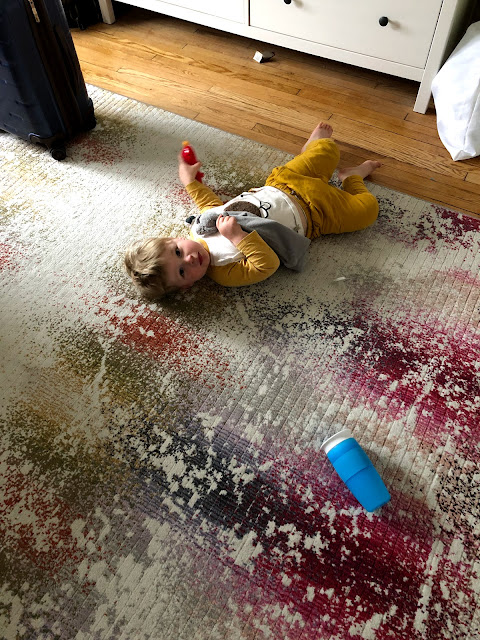 Then we bundled up and headed to High Park for E's first t-ball game.  It was about 4 degrees but it felt colder than that. We had toques and mittens on, and we had blankets.   E seemed unfazed by the cold; here is his first at bat. 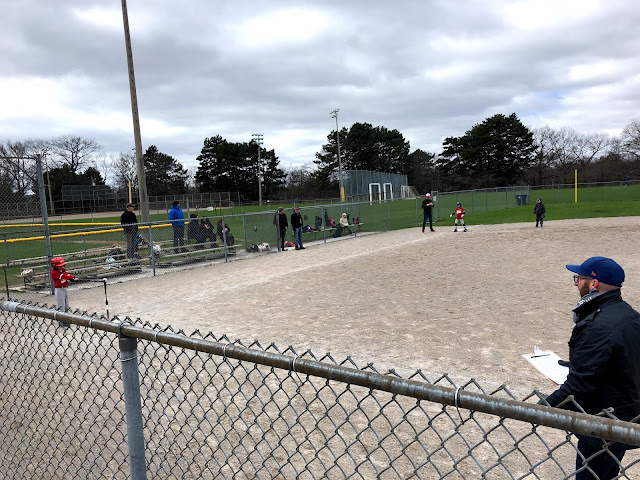 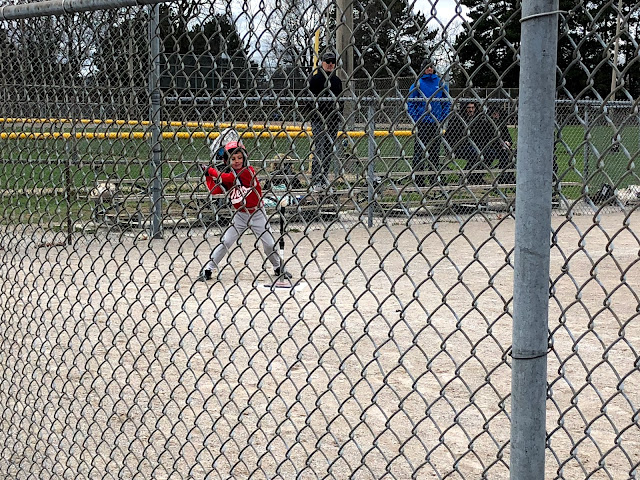 The game was from 12 to 2, so we brought a picnic lunch and Q enjoyed some pitas and hummus and yoghurt in the stands. 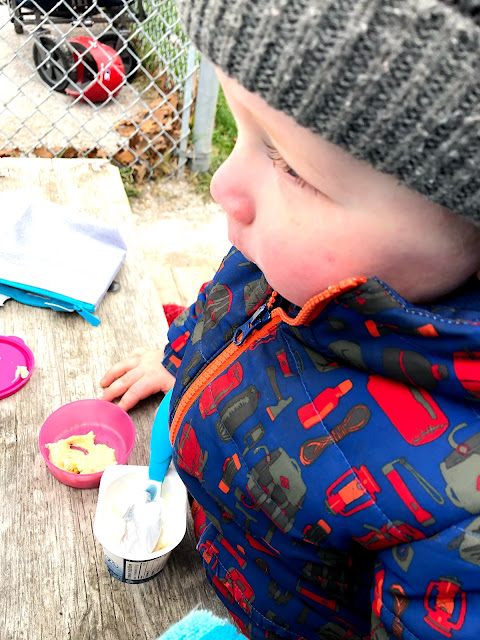 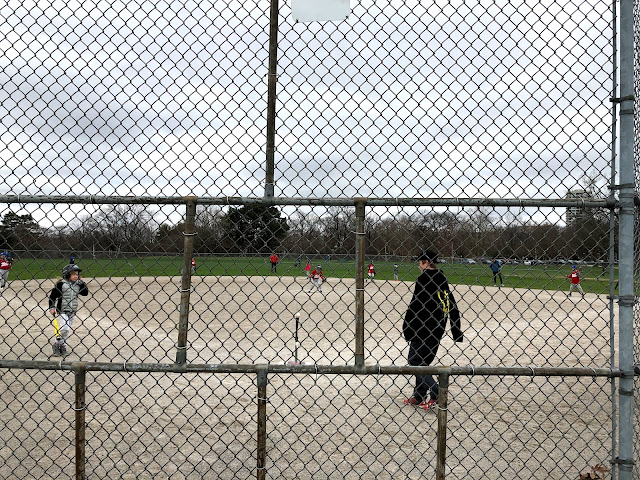 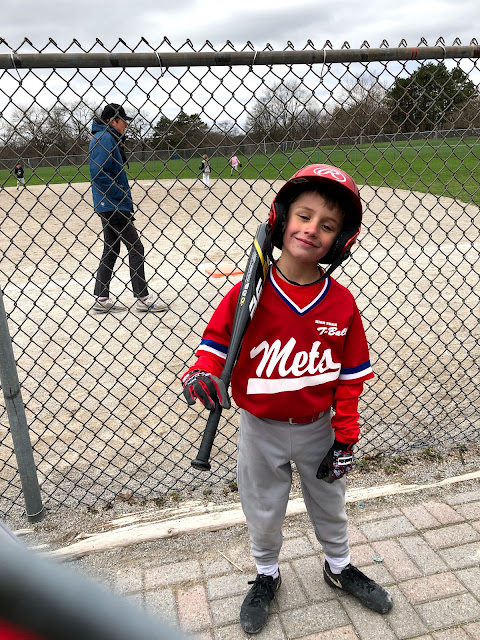 After we got home Q had a nap and then our neighbours invited us over for supper, which was great since we had no plans and were just going to order something.   The kids making supper out on the deck. 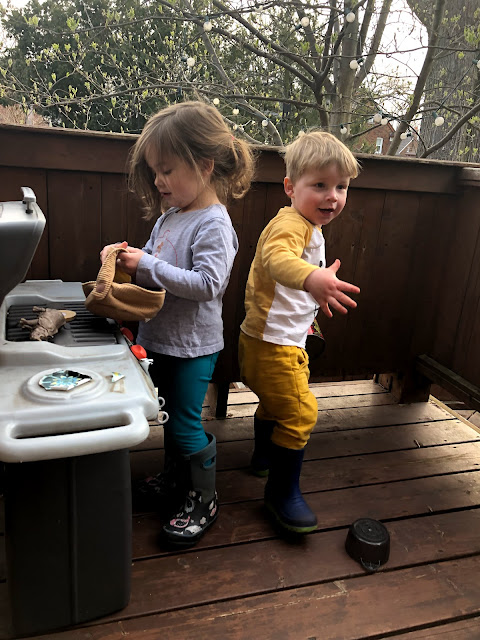 No feet on the table!! 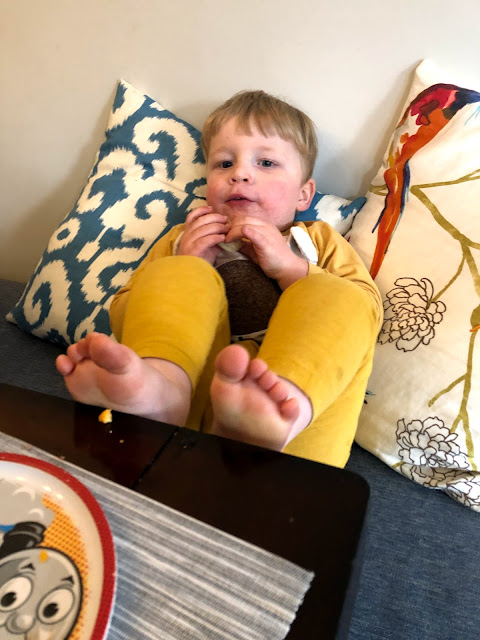 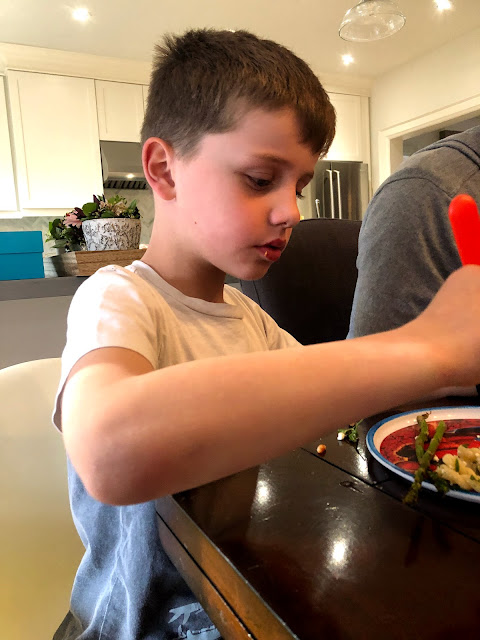 We watched the Raptor game and then tried to get to bed early.  Dave was headed to Florida on Sunday morning for work.

When the boys and I got up, I tried this recipe for homemade bagels.  They don't have the same density as regular bagels but they were tasty - I sprinkled the tops with poppy seeds, sesame seeds, dried onion, and salt. 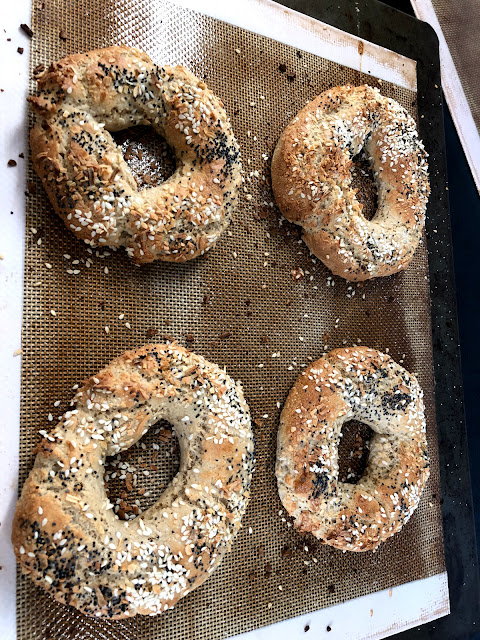 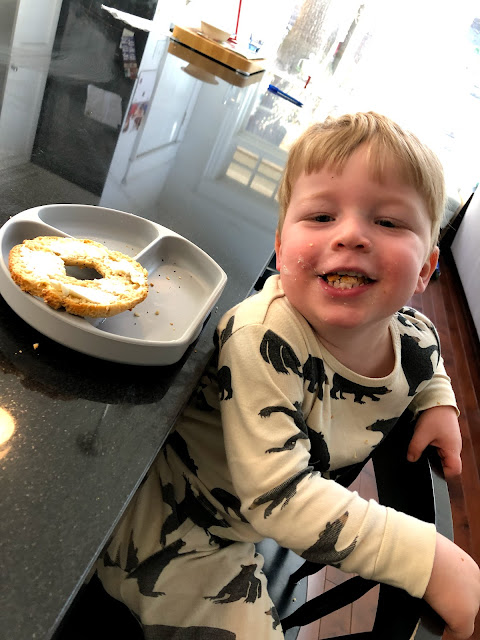 Then it was off to church, still not super warm, but a big difference than the day before since the sun was out! 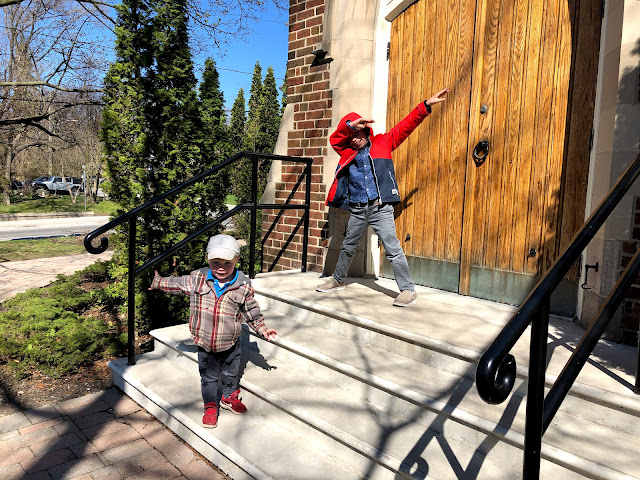 Since Dave was away, Q had to come to E's swimming lessons which pushed his nap again on Sunday, but he hung in there.  I see I caught one of his little buddies from school in this picture, she is wearing the pink suit walking around with her dad, Q was excited to see her.  E is in the bottom corner of the pool, but you can just see his face. 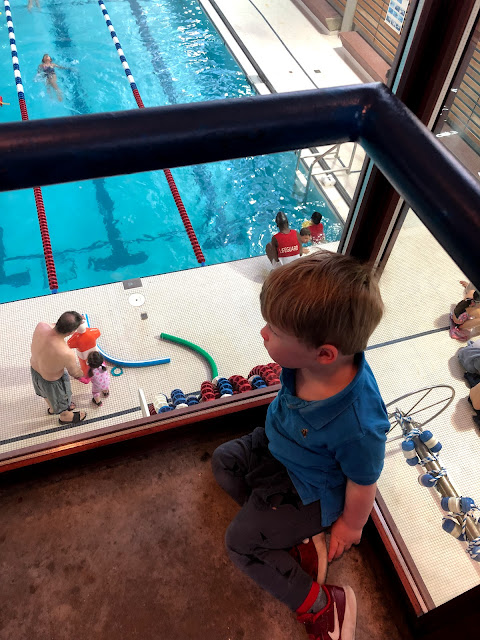 We hurried home so Q could get to bed.  E worked on his homework and I did a bit of work too.  Then E finished his movie (we had watched part of Ready Player One the day before), and I had a 20 minute nap.  We got Q up so we could go and get our grocery order, and then come home, leave the groceries, and walk up the street so we could make it to the bakery and the library before they both closed at 5:00.  We cut it close (walking into the library at 4:50), but we got our errands done!

Although we were starving with plans to eat supper at the local pub, Q wanted to go to the playground behind the library so we went there for a few minutes. 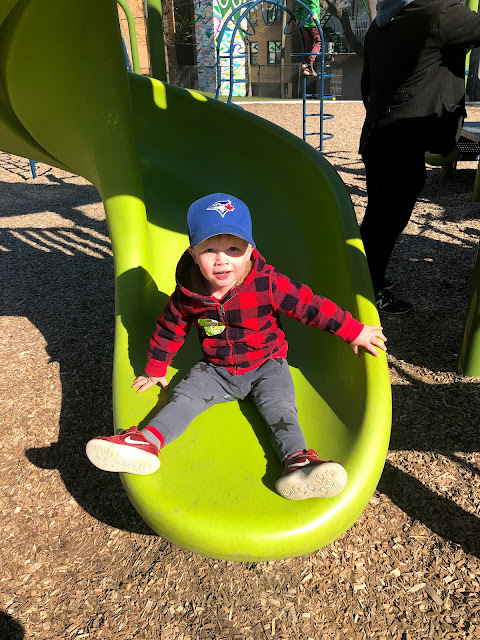 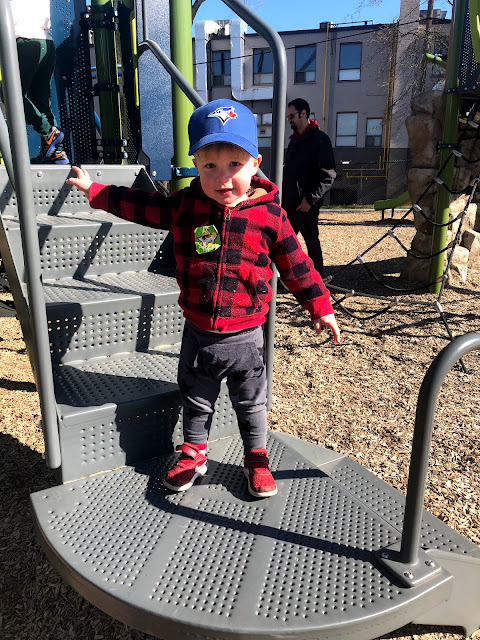 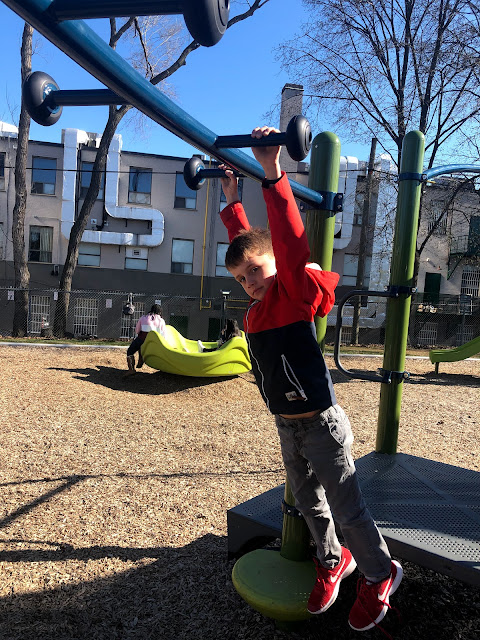 We were going to order pizza but since it was nice out, I thought it was better to walk up the street to grab dinner.  Plus they had Guinness, which we did not have at home ;)

Milk in a soup container with lid as suggested by the waiter (but it worked, he didn't spill it!) 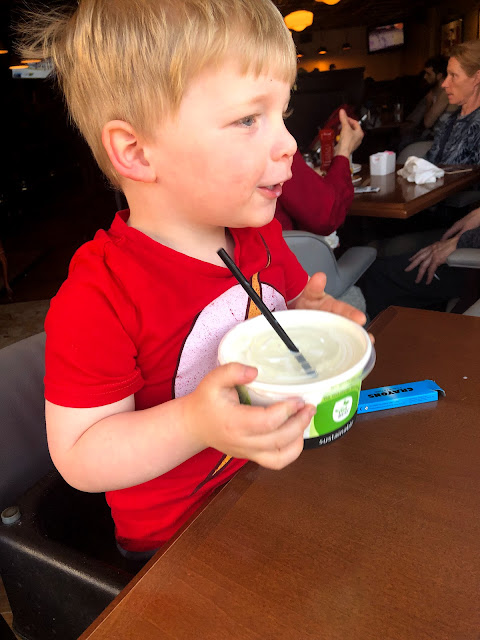 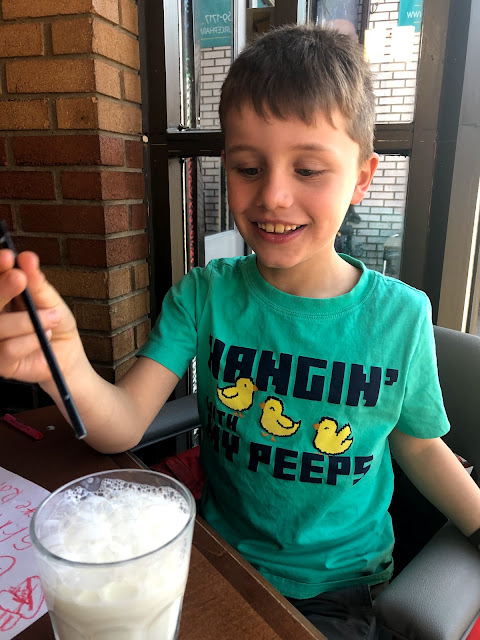 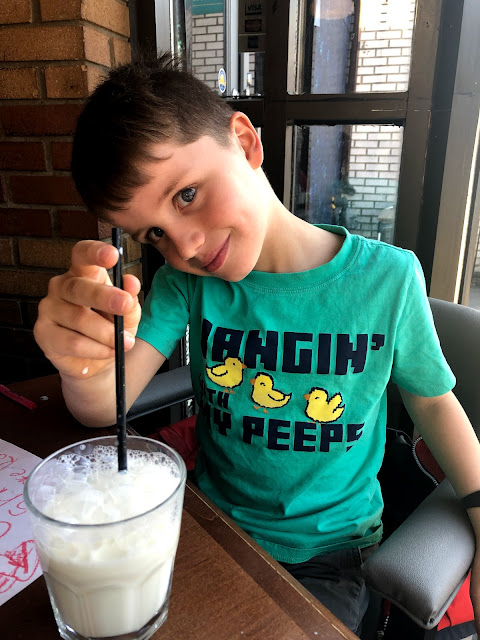 We walked home, had baths, and got ready for the week.  Then I settled in for Game of Thrones.  I stayed up too late to watch a bit of Talk the Thrones, I could not resist, I wanted to know more!