Last Thursday I took pictures all day for this edition of a Day in the Life post.   You can read previous days in the life here. 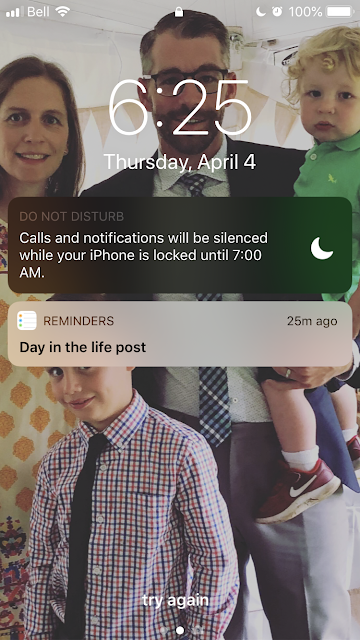 Dave was away in the States last week for a couple of days, this was the second morning without him and Q was not happy that he wasn't there.  He was fine on the first morning but today he just wanted Dad.  So he refused to let me get him up and I left him in his bed while I got ready.  Whenever I would go and check on him to see if he'd changed his mind, he would tell me to "Go!!" E had slept with me so I went back in to get him up and brought him his clothes. 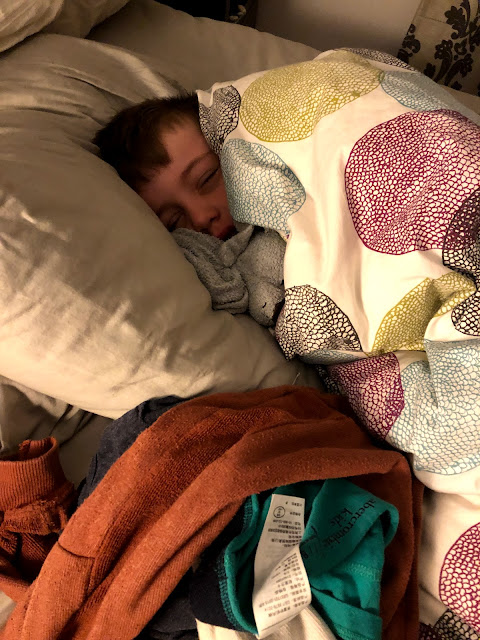 Meanwhile I went downstairs to make our breakfasts.  Oatmeal with grated apple and cinnamon.  (this is before they went into the microwave) 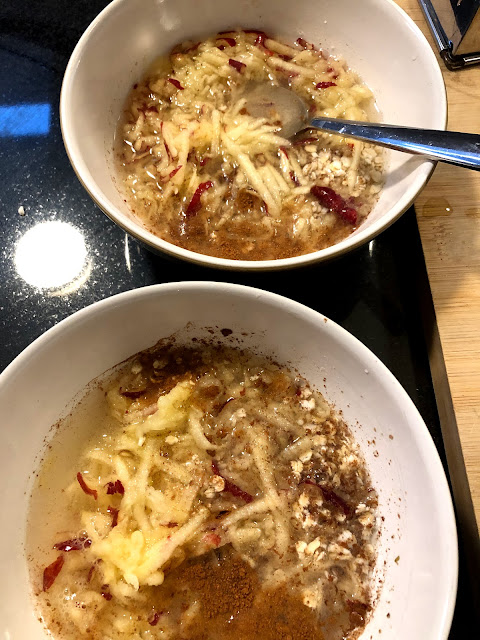 Eating at the counter. 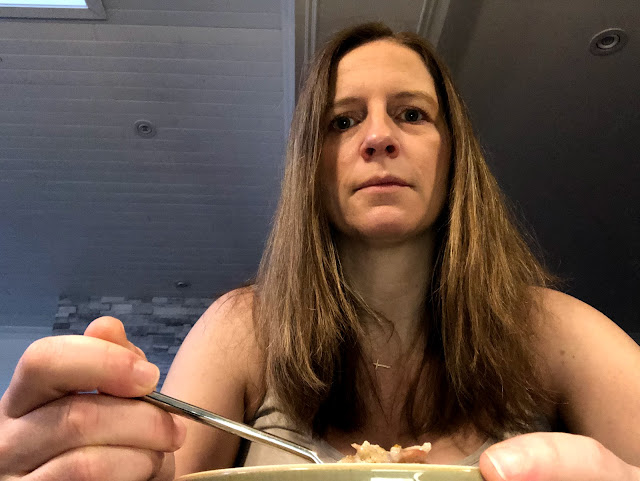 E came down and set up the music to the (original) Mary Poppins soundtrack, it's been getting a lot of play around here lately. 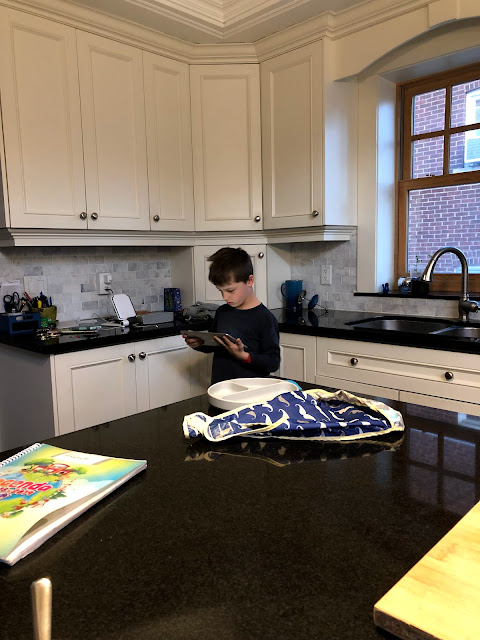 I wasn't sure if Q would join us for breakfast or if I would have to tear him out of bed right before we needed to leave.  But when I went up again he allowed me to get him dressed and then he came down and needed some cereal. 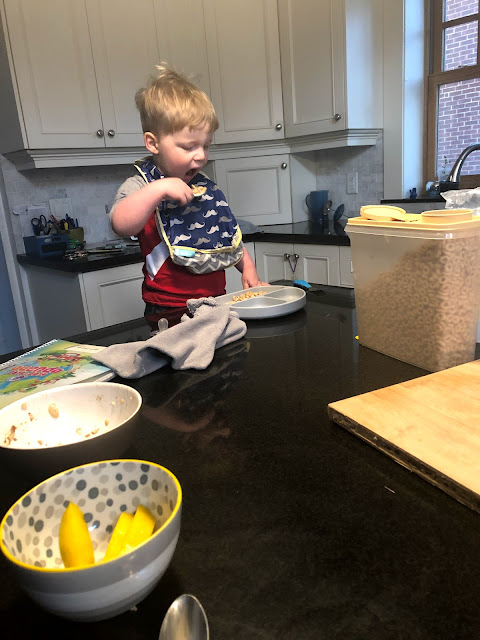 Despite the challenges to get out the door, both boys were all smiles when we got in the car.  On our way, the car started acting weird and I thought maybe we had a flat tire but when we stopped, it was not flat.  Then the service light came on to say it was the suspension.  So not great, but fine that I could drop both boys off at school and take the car home. 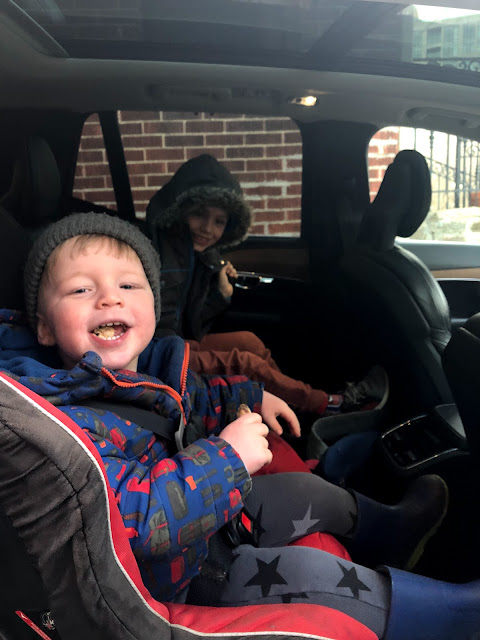 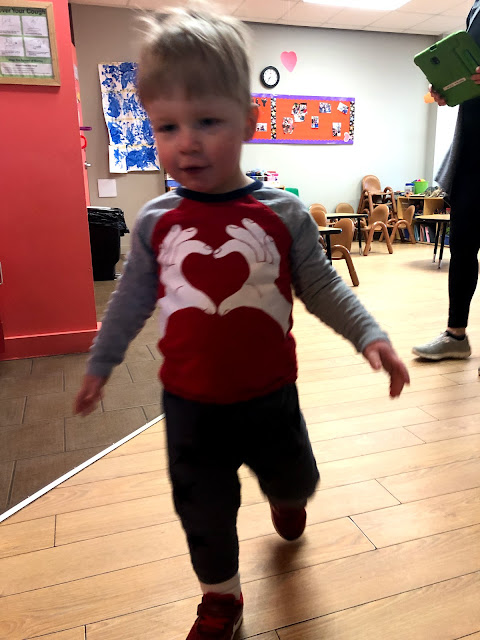 Then E got to school.  Nice sunny day. 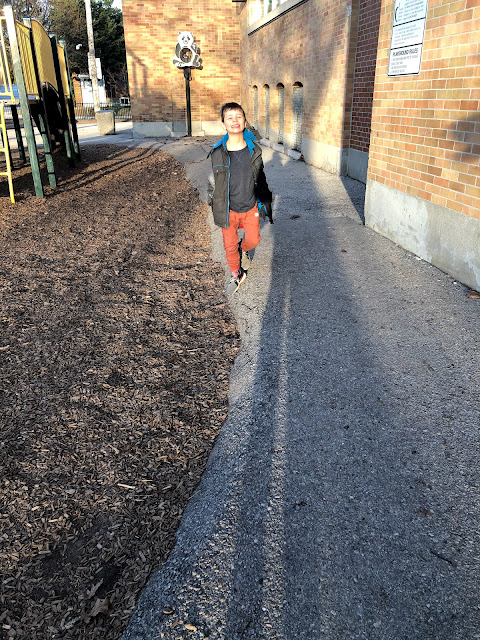 I carefully drove the car home and parked, then grabbed my bag and headed to the subway.  I am usually leaving the house between 7:20 and 7:30 to get to work as close to 8:00 as possible.  Since I had to drop the boys off at 7:30 I was later than usual, but was at work by 8:30 and that was fine. 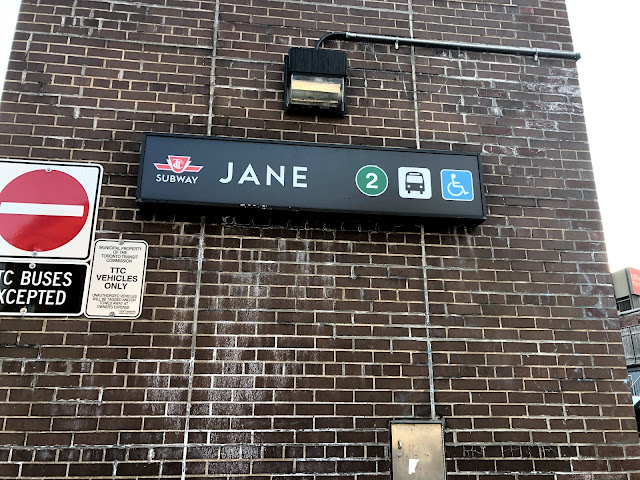 I got a coffee from the kitchen (since Dave was not home I didn't bother making a pot).  I got to work reviewing a few contracts and meeting with people in my office. 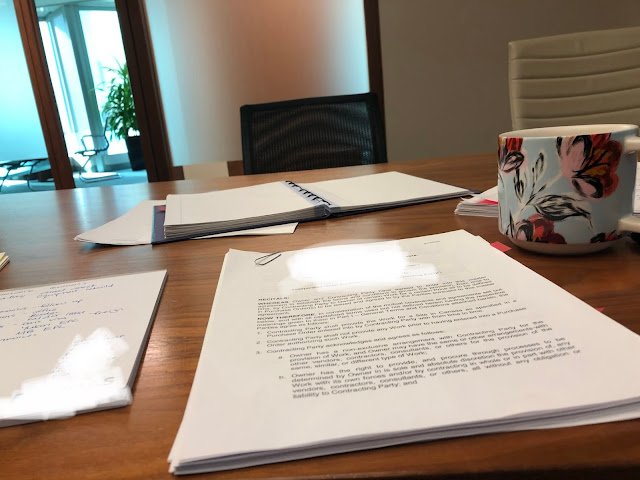 I ate lunch in my office - leftover red lentil and chickpea curry with mango salsa.  Then got right back to work on a contract summary so I could get it sent to someone else by "early afternoon" as I had promised (I tend to give vague deadlines where possible). 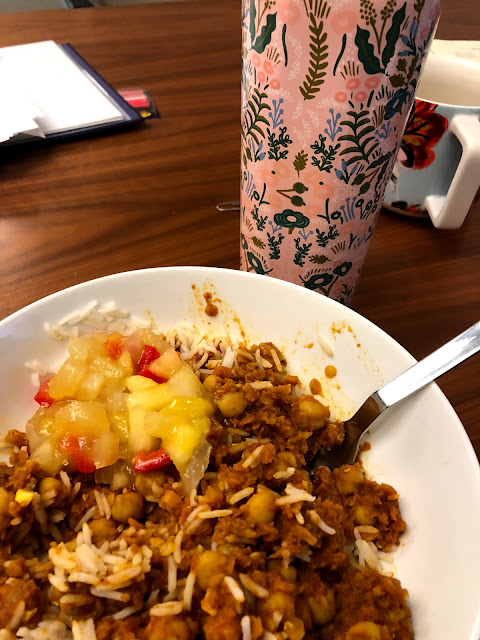 So after I got that sent out I took a quick walk over to Balzac's by the St. Lawrence Market.  It was still chilly, but so nice to be out in the sun 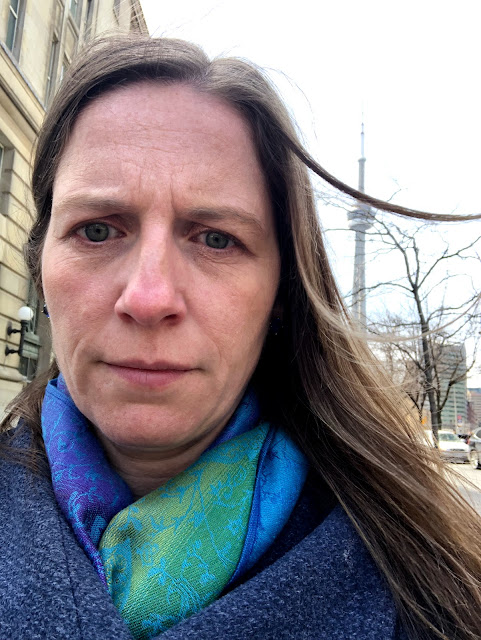 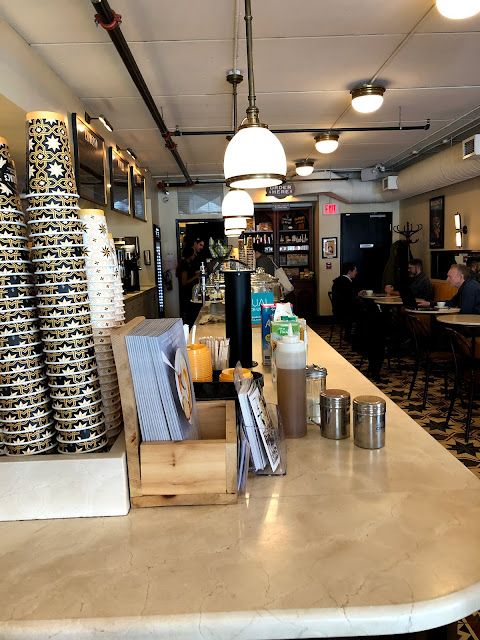 I finished up work for the day and left around 4:20 so I would  not have to rush to get the boys from school. 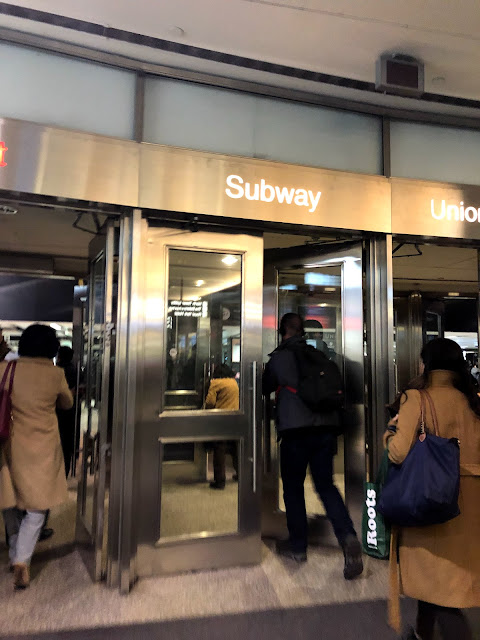 Q not super happy on the way home, but that's typical.  He did not want to change into his boots or put on his jacket, so I carried him out wearing his indoor shoes, sans coat. 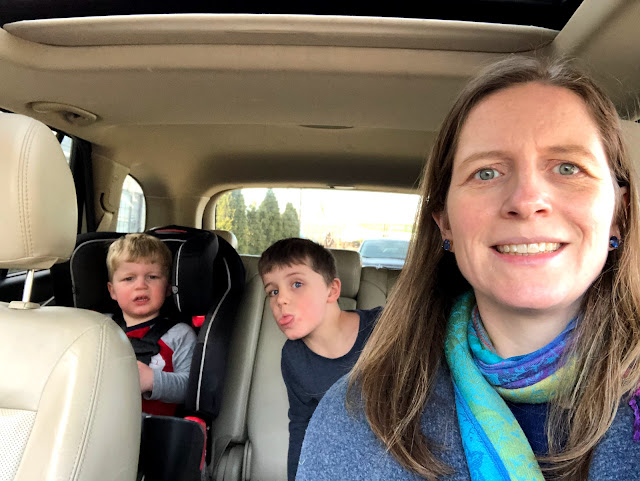 We were having leftover macaroni and cheese so no prep required except for warming it up.  Q didn't feel like joining us at the table, so he laid down by the back door for a little while.  He doesn't usually have his soother and Guy outside of his bed, but since they were downstairs from him being sooky in the morning, he quickly found them when he got home. 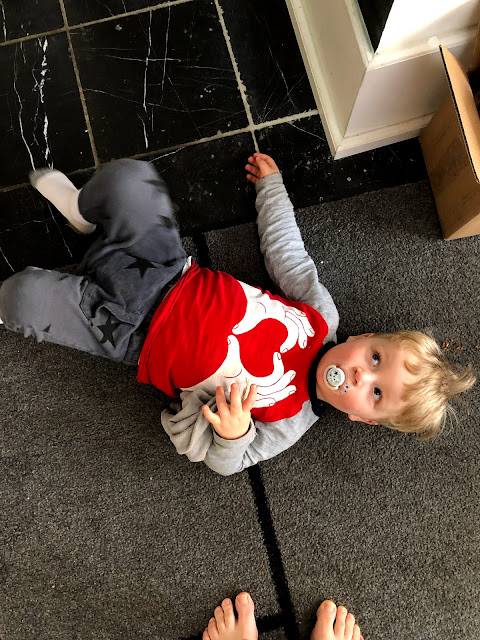 E and I ate our meal and then we sat down for E to do his reading.  While we were doing that, Q sauntered over to the table and started eating his meal. 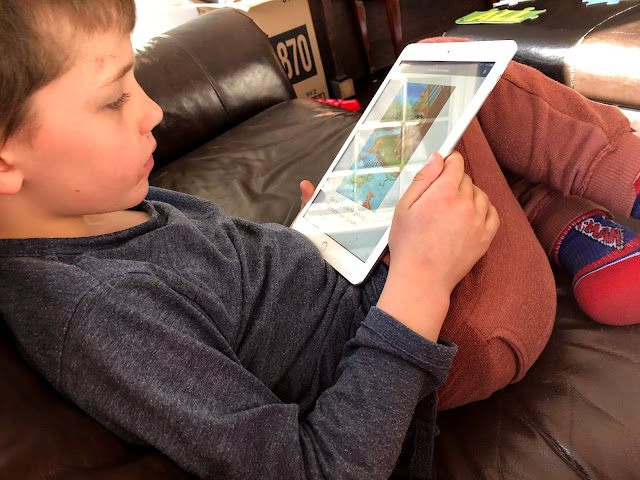 It was early and so we decided to make cookies.  This guy loves to help out in the kitchen. 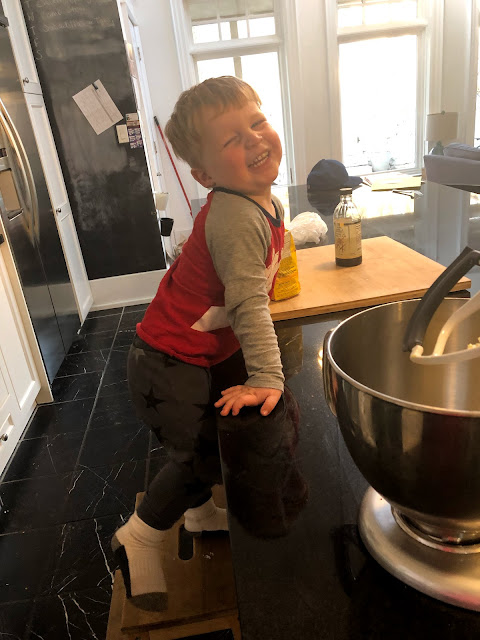 E worked on his math homework while we did the cookies and then he played on the iPad. 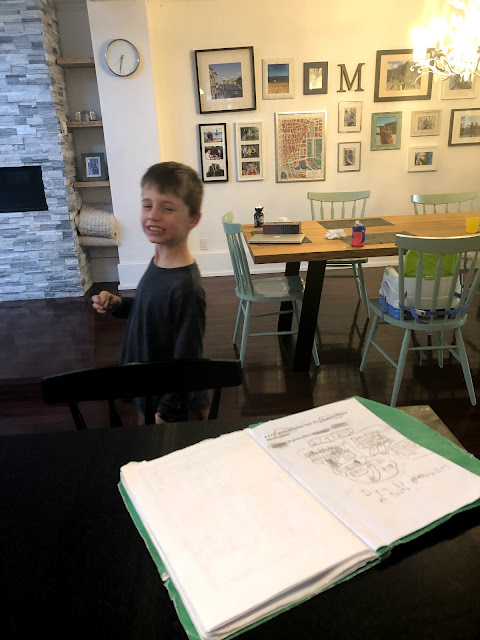 Yummy!  Q was actually a really good helper.  The cookies are just plain sugar cookies that you roll into a ball and then roll them around in the sprinkles.  When they are on the pan, you push them down slightly with the bottom of a glass.  E did all of the rolling in the sprinkles. 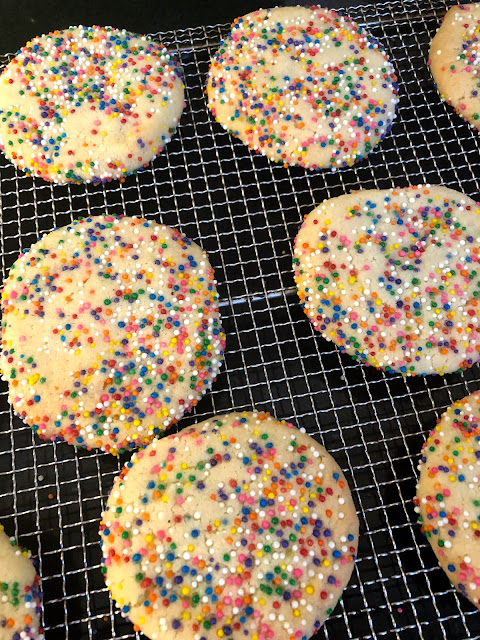 Q went to bed after that, and then E and I sat down to watch Mary Poppins. 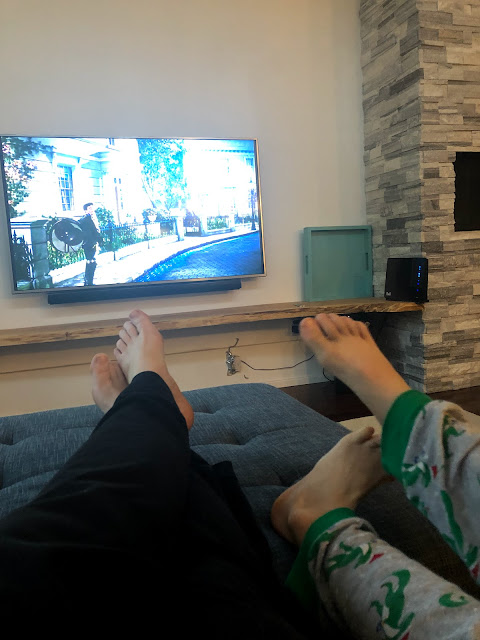 He went to bed and I came down to make our lunches and tidy up. 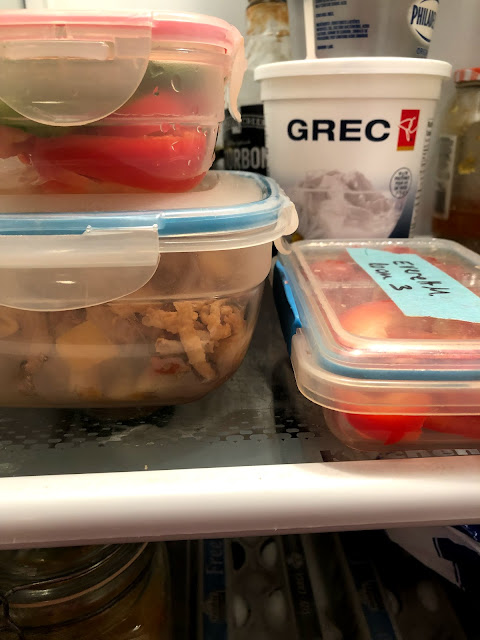 After that I watched a few episodes of Queer Eye and then went to bed.  Dave flew in that night and got home around 11:00.   Although I can do it without him, it is definitely better when he is home!