On Friday night we had pizza night again and then watched a bit of TV.  We tuned into the Leaf game (the one where they came back from being down 3 and then winning in overtime) and then tried to get to bed fairly early.

Saturday was our big day.  I got up early to go for a run followed by a workout.  It is hard to get up early sometimes but I never regret it.  Then we got in the car and drove up to Shelburne to visit with my family.  One of my mom's cousins passed away in June and we would be having an outdoor celebration of life on Saturday.  We haven't been up there since last year so it was great to see everyone. 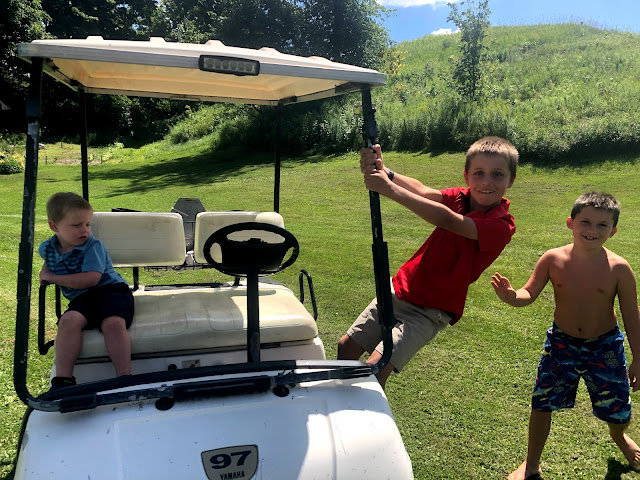 Jean, the cousin that died, always took the kids out for a Gator or golf cart ride and let them drive, so E felt he was adequately trained.  (I actually didn't let them go out like this, I said A could drive while E held onto Q, who was sitting in the middle, and that worked out well.) 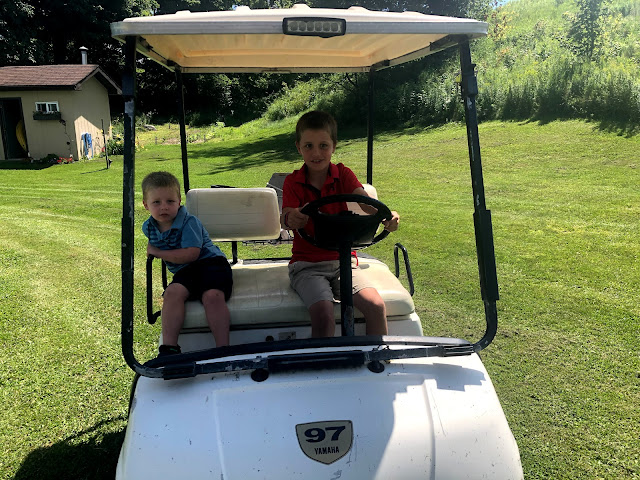 After the service, we just hung out around the yard for the rest of the day with everyone.   The boys went out in the field and dug a few potatoes. 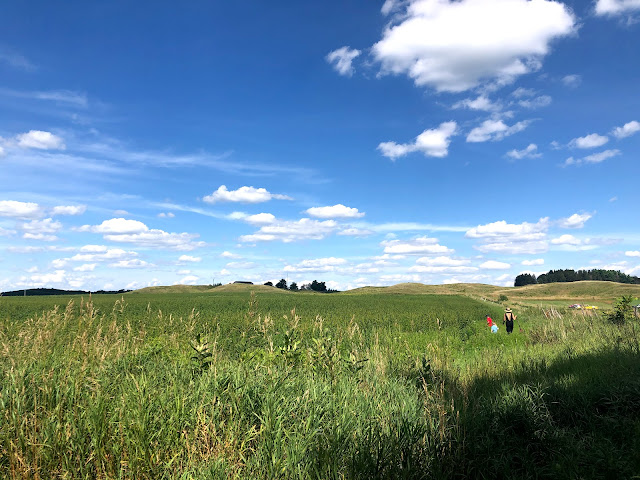 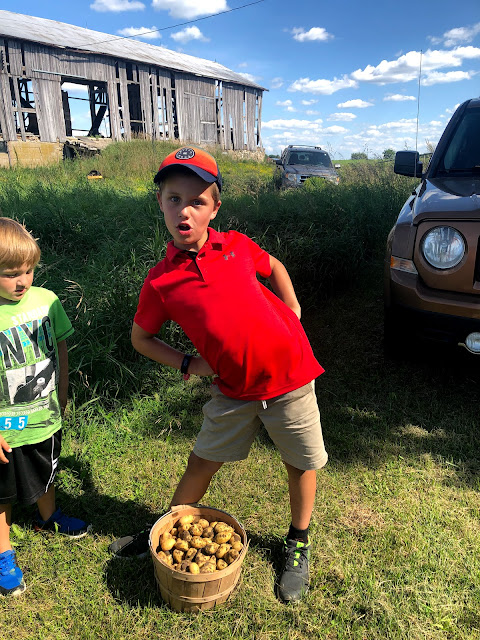 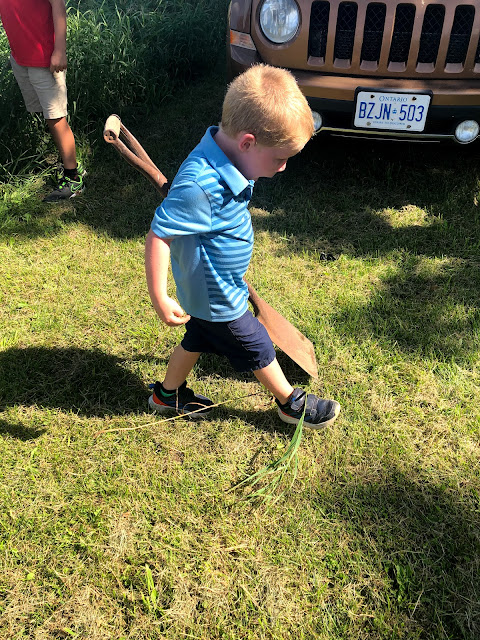 Then cousin Ryan took Q for a ride in the side-by-side, and he was pretty excited! Ryan will have to take over for his mom now and take the kids out for a ride when we visit :) 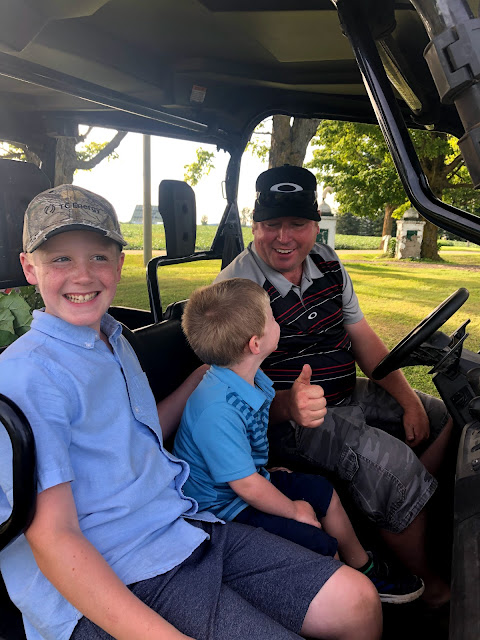 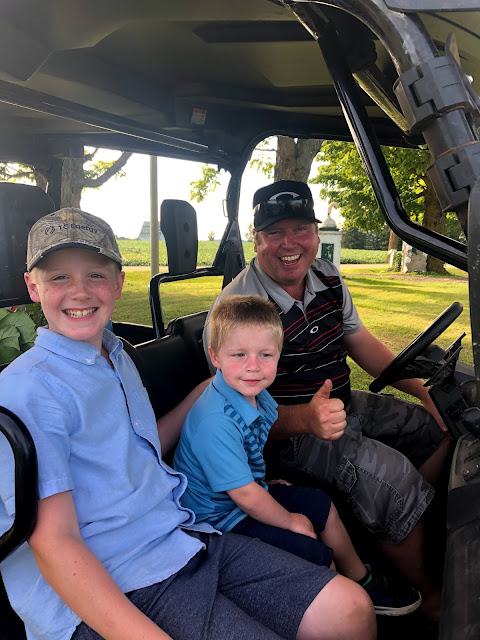 This farm house has been in the family for four generations. 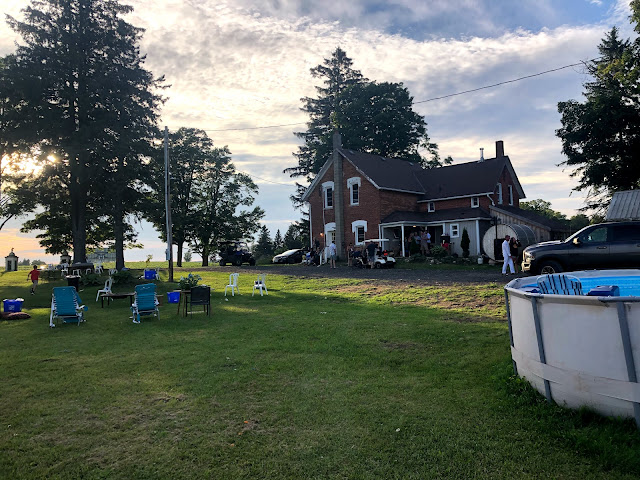 Can't get enough of these skies. 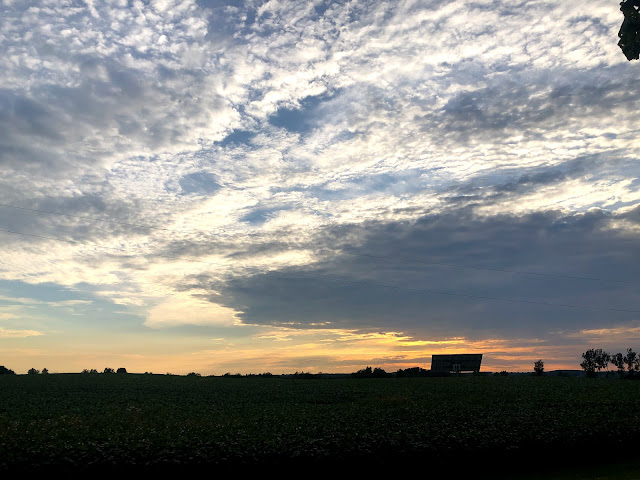 Mel broke out some cheesies for the kids, she was popular. 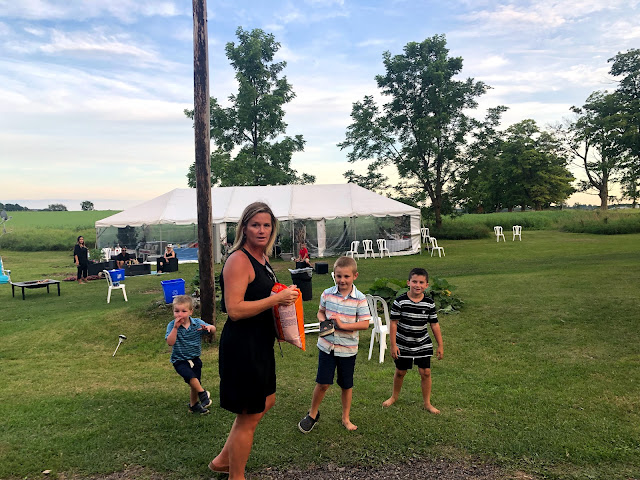 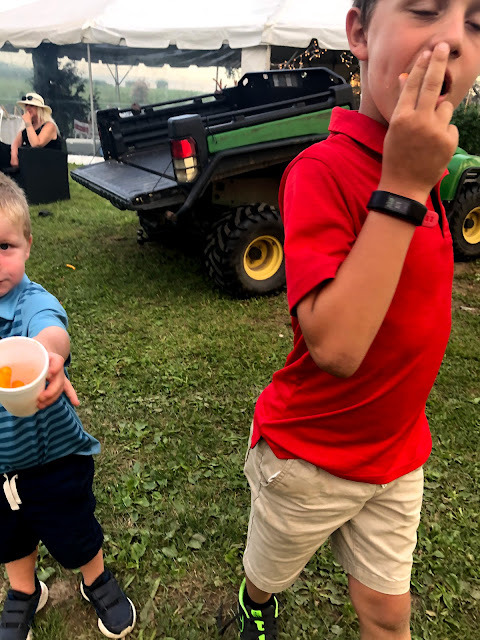 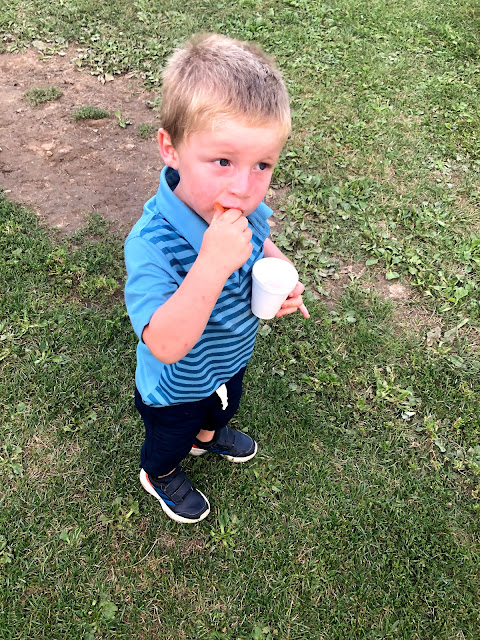 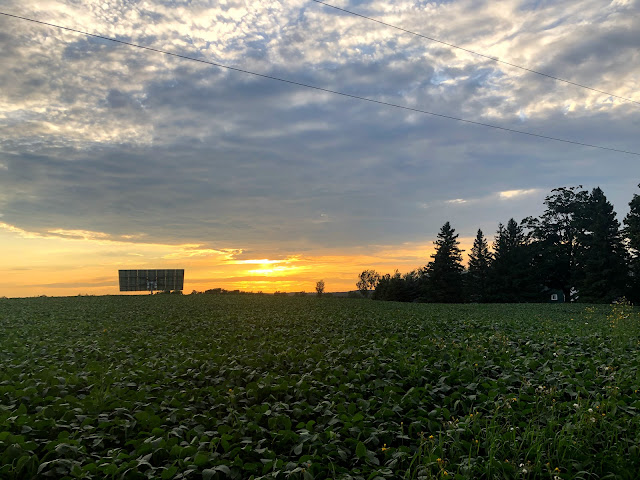 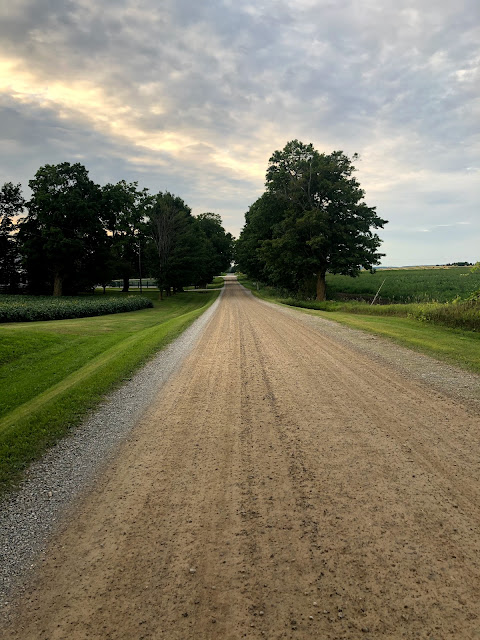 We brought our tent to sleep in and set it up right on the property which was convenient.  We had a fire and then the kids basically asked to go to bed.  Once I got them settled, I snuck in there myself.  Unfortunately E threw up after he got into bed and had been sleeping for a bit, so I had to get up to drag the air mattress outside where Dave and Ryan helped me hose it off.  Dave stayed up a bit later.  Then it started pouring (we all agreed rain was not in the forecast!) and that kept me awake for most of the night (also Dave and I were sharing the remaining non-puked on sleeping bag, and sleeping on the upside down mattress with the plastic side up, not super comfortable).

The next morning we were pretty tired.  I helped clean up from the service/party and then we had breakfast at Brian and Nancy's and then had a swim before getting in the car to drive home.  We had thought about spending the day there and heading home on Sunday evening but it was not in the cards for us, we just wanted to get home and rest.  I wish I had taken more photos but I was too  busy catching up with everyone.  I hope we can get up to visit again soon.

Here are some photos of Jean with the kids from last summer when we were up there. 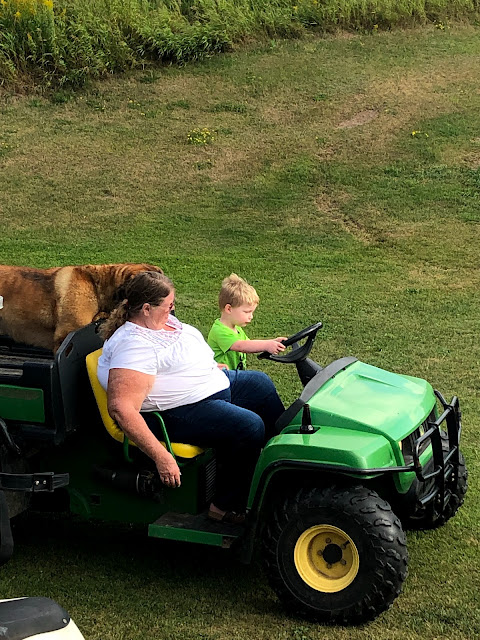 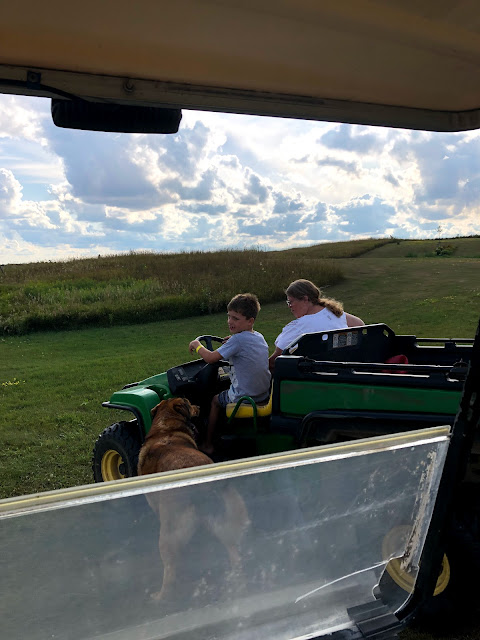 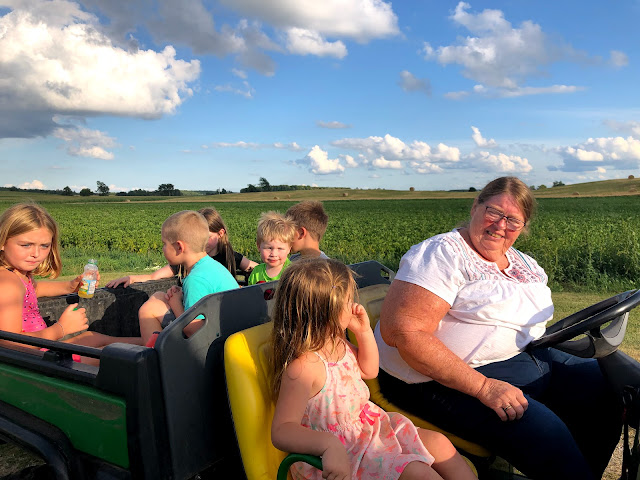 And a sky photo from last year because I can't help myself. 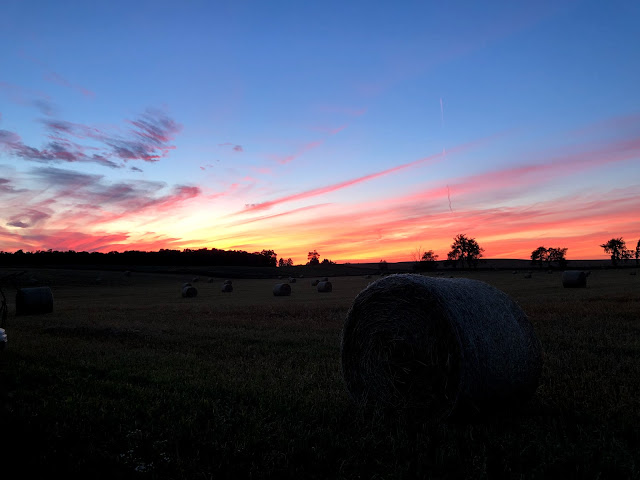