I documented my day on Monday to show you how things are going now that the kids are back at school and my work days are a bit more streamlined. 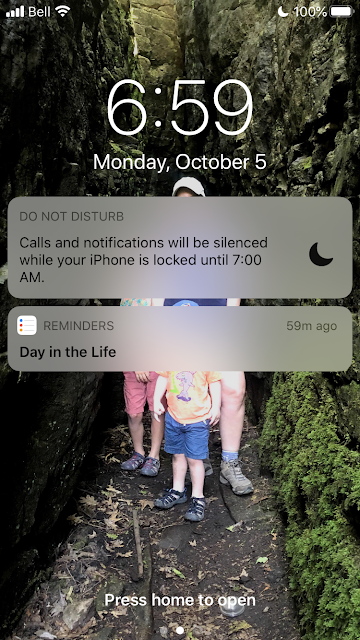 I had a quick shower while Q got himself dressed. 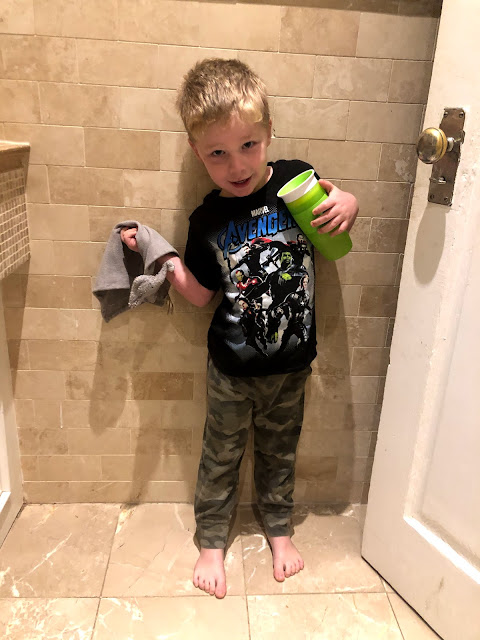 Then downstairs to make lunches.  Q had 3/4 of a bagel (all that would fit), cupcake, yoghurt drink, and peppers and nectarines (those two things coming home untouched). 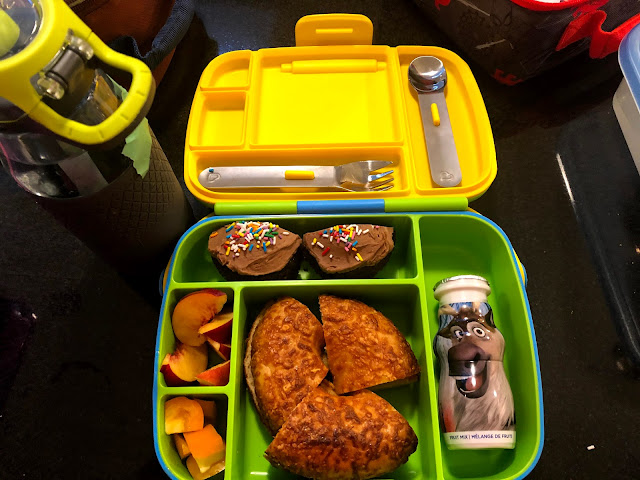 E had a bagel and cupcake too, along with vegetables and some banana chips.  He didn't eat all of his snap peas but the rest was gone. 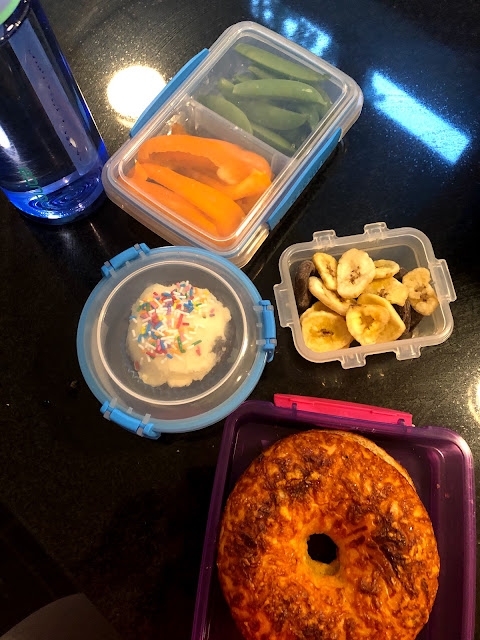 E was up a bit later. 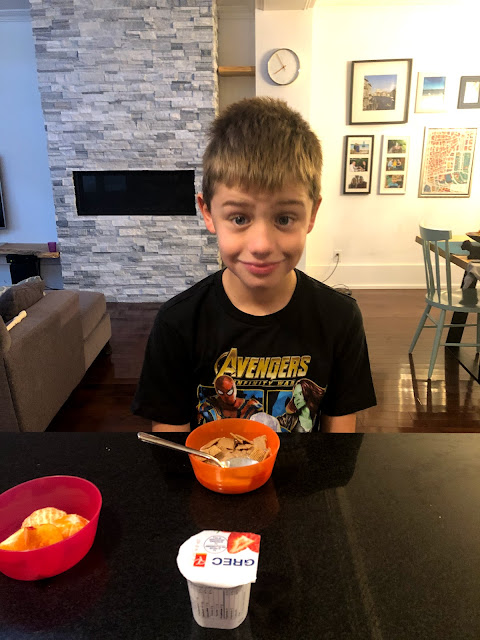 Then I took the kids to school.  Q had a small cut on his lip and the scab had come off, so he was using a kleenex here.  He put his mask on later after the bleeding stopped. 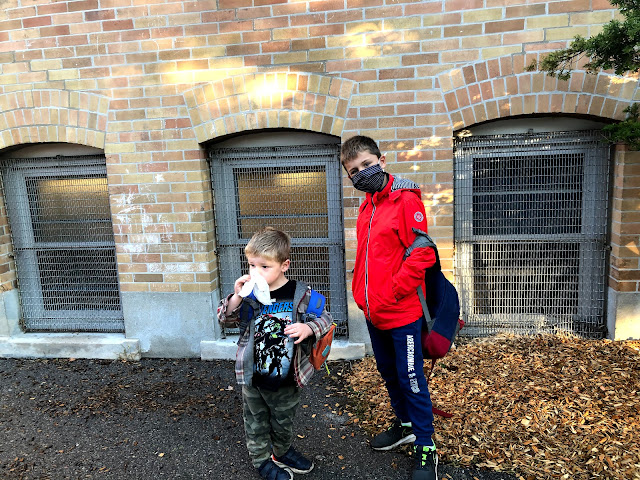 Then I picked up our grocery order. 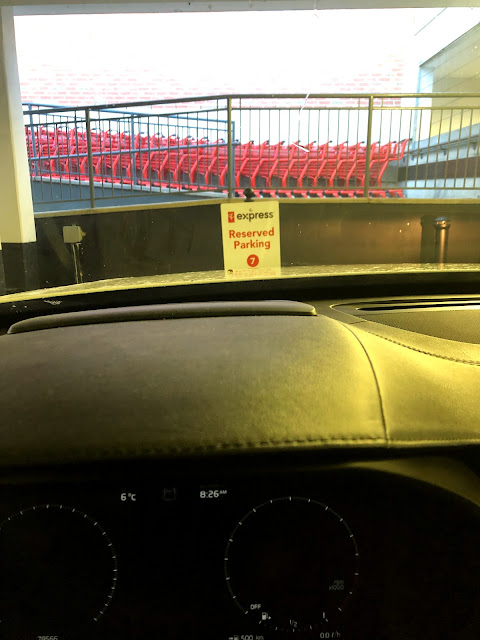 We had been doing grocery pick up before Covid anyway, but we have definitely increased our use of it lately.  We have always had good luck with everything, but this time we had a miscommunication.  I had chosen three vine tomatoes, but instead got three bunches of tomatoes.  Salsa and pasta sauce coming up! 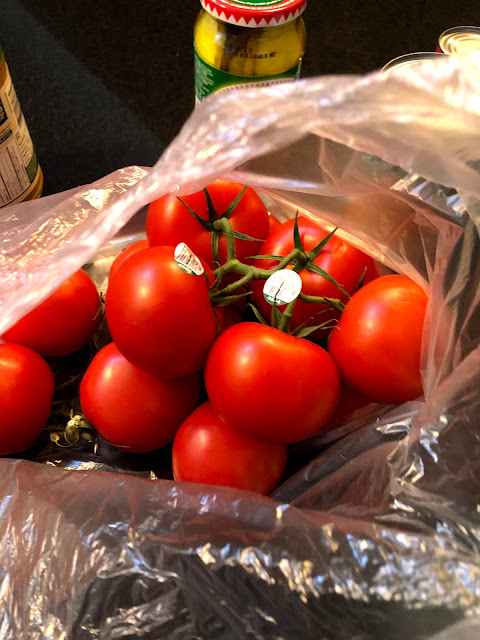 I had eaten Q's remaining 1/4 bagel with some lemon water before I took them to school. When I got home I was able to have my coffee and some granola with cashew milk. 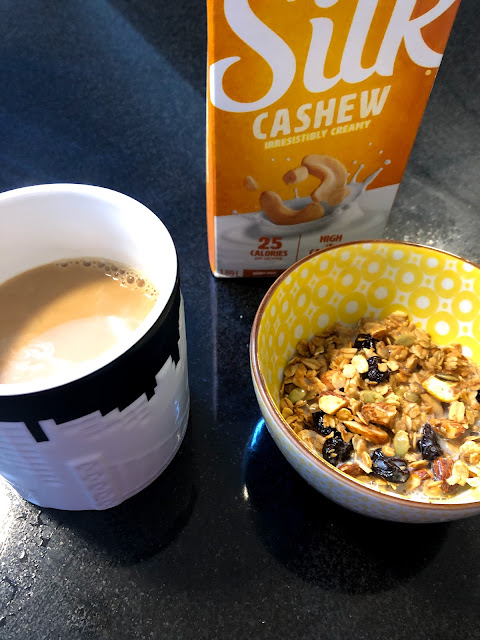 Settled in at my desk.  I got to work on reviewing some agreements and drafting a memo regarding our security in Mexico. 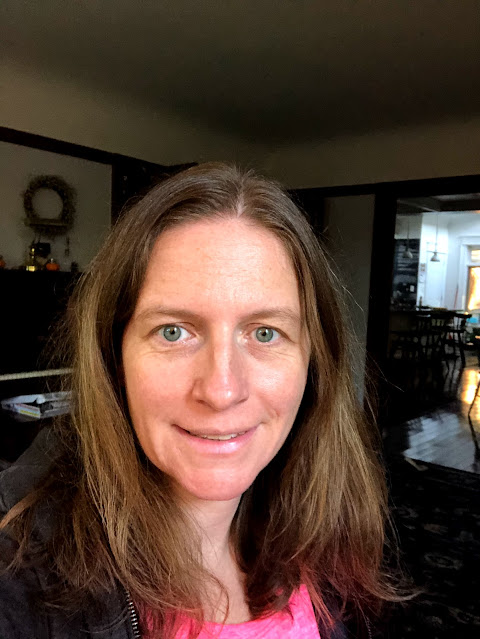 Midway through the morning I had a call from the library to say my holds were in.  Two new books, eek!  I've got to get reading! 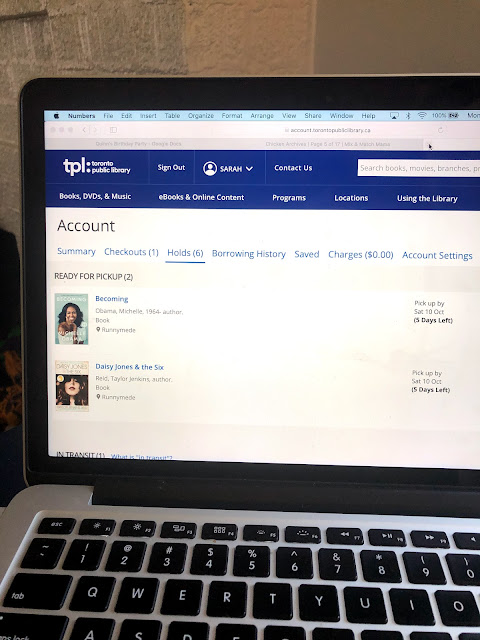 I had a meeting scheduled for 12, so I wanted to eat before that.  I took a couple of minutes to run upstairs to make the beds and tidy up, listening to The Daily podcast while I did so. 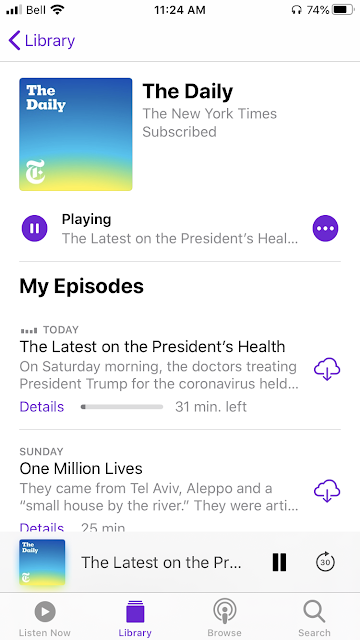 I had asked Q to make his own bed and he said it was "too hard". 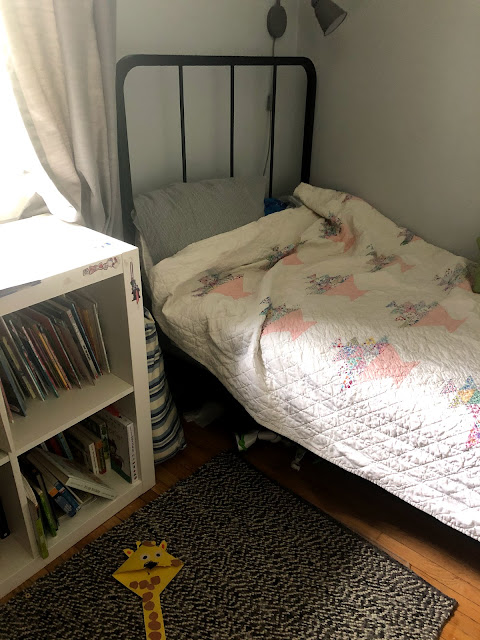 Lunch with my office mate.  We had leftover Popeyes. 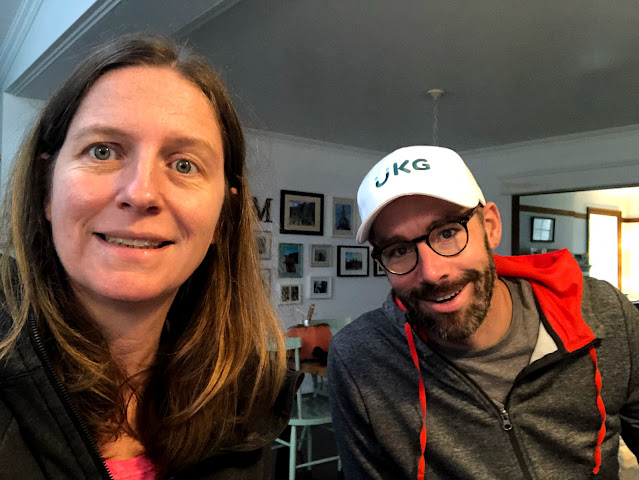 I had a few meetings, and then got the swimming bag ready for later that afternoon. 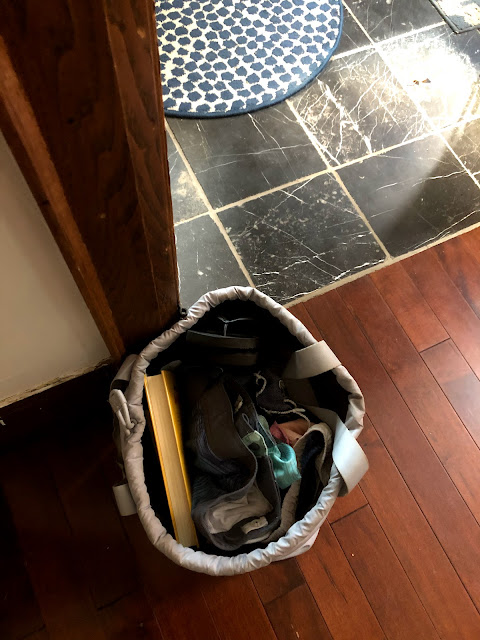 Before I left to pick up the kids I put on some real clothes (i.e. pants with a button/zipper) 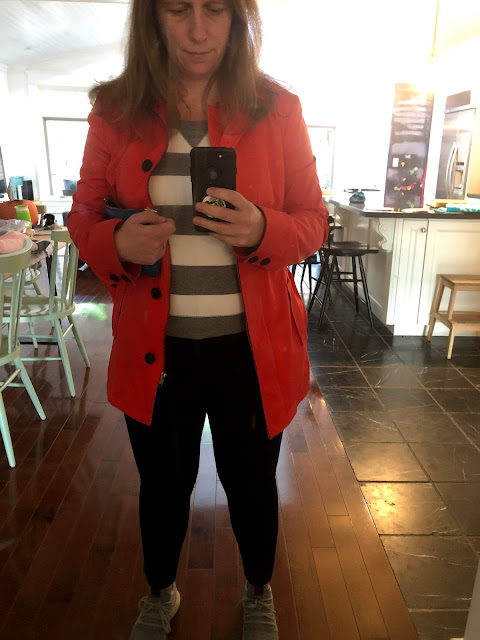 I picked up the kids from school while Dave finished up a phone call, then we went back to get him and went to the pool. There are only two classes at a time at the pool so there is hardly anyone there.  E was first, and we watched from above. 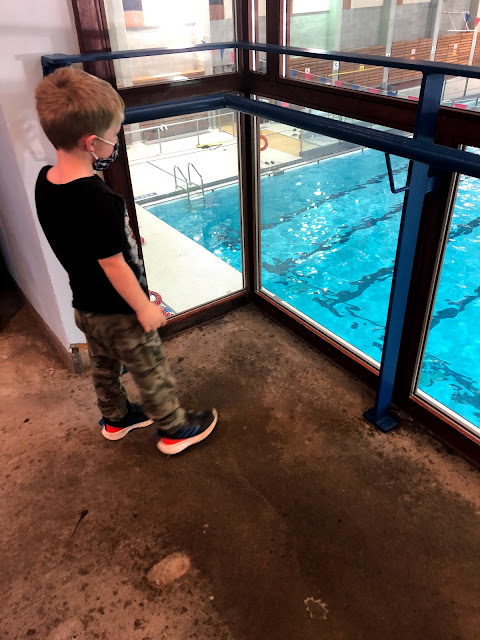 Then it was Q's turn.  The way they are doing the small children's lessons is with a parent since they can't swim alone and the instructor isn't allowed to touch them.  E read a bit of his book (and oops, he forgot to put his mask back on after getting changed, I only noticed after I took this photo). 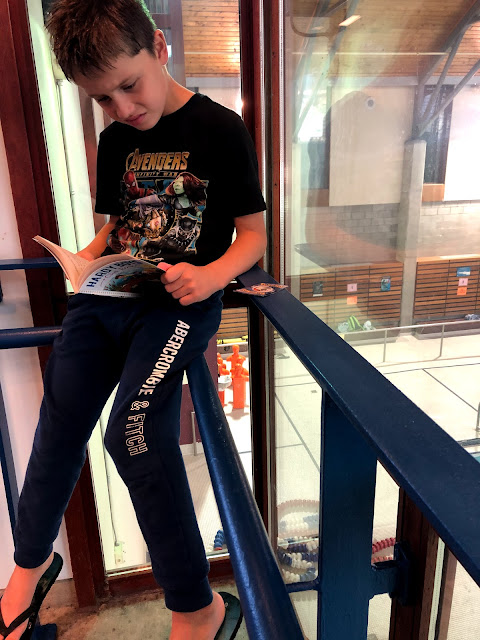 When we got home I got dinner ready while E worked on a project for his drama class.  He said he needs to make a car, and since we don't have a big cardboard box, he is making four wheels out of a smaller box.  This is his template.  Q was in on the action too. 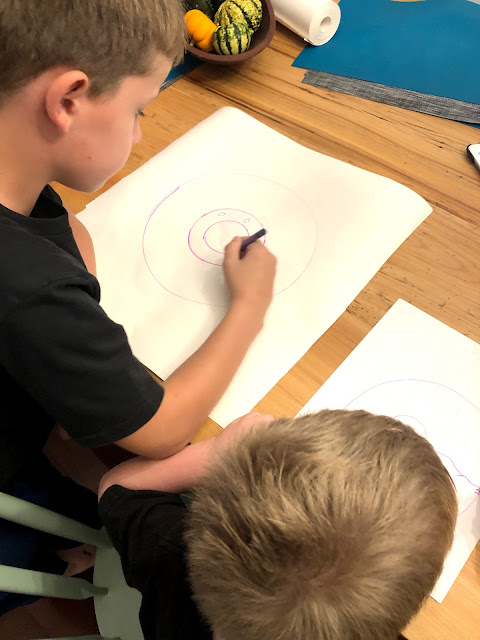 Because of the art project, we ate at the counter.  We had salmon, sweet potatoes, carrots and broccoli. 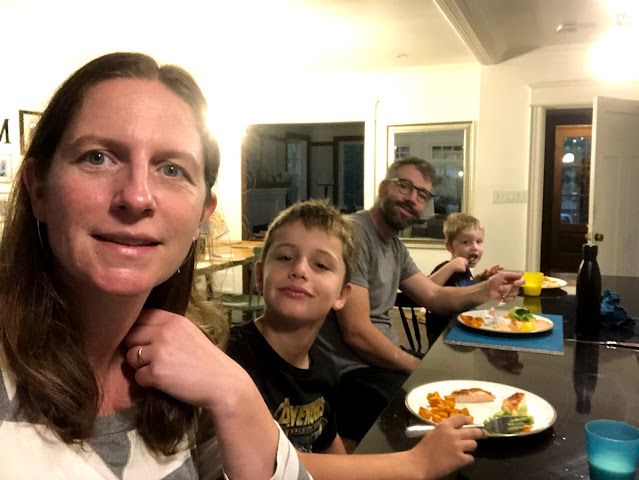 After supper and a quick clean up, we went downstairs to watch the rest of Into the Spiderverse.  Q went to bed around 8:00.  I started Dancing with the Stars shortly after that (everyone did so well!!), and worked on my blog post. E did a bit more on his project and then Dave read Narnia to him starting around 8:30. 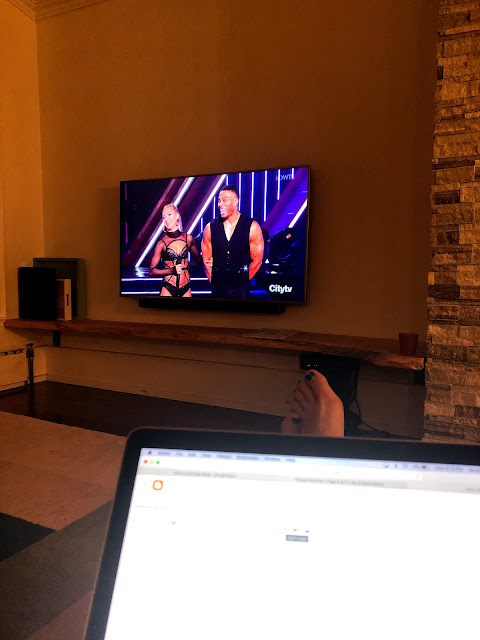 After DWTS Dave and I watched Broadchurch and then got to bed around 11:00. 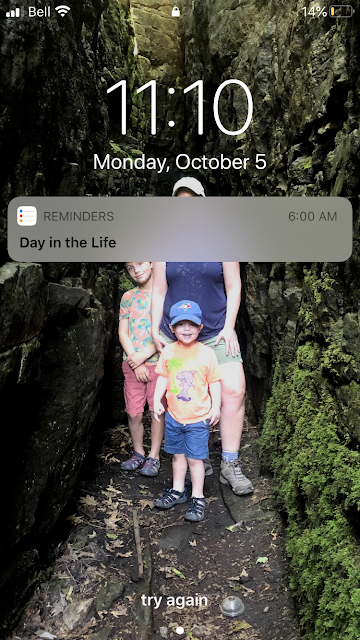 You can read past Day in the Life Posts here.
Posted by TorontoSAM at 6:00 AM