How we do Pizza Night 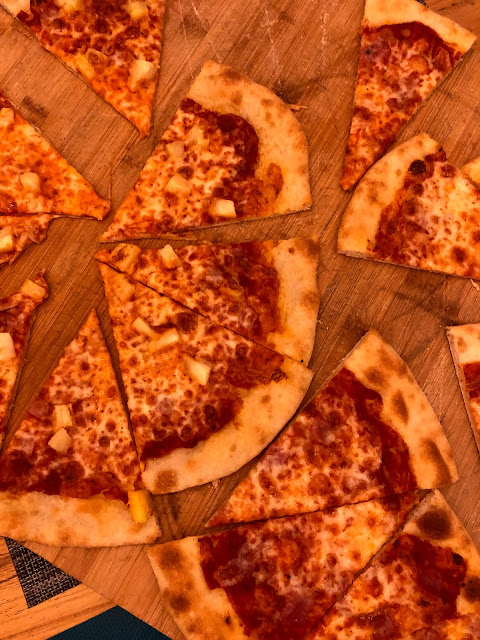 Since March, Friday Pizza Nights have become a staple in our house. Since we were stuck at home, this was something fun to look forward to, and helped maintain morale.  Pizza night is common for many people on Friday nights, and this is what ours looks like:

Dave makes the pizza dough from scratch.  He has spent time developing his recipe and method.  I'll share his recipe at the end of this post.

Dave makes a separate dough for each of us and we all make our own pizzas.  It makes quite a bit, but it means we always have leftovers for lunch on Saturday and we made use of that several times to take somewhere for a picnic lunch during a hike or bike.

Dave makes the doughs around 3:00 and then lets them rise until 5:00.  Then he gets them onto the counter where they sit, covered by a tea towel, until we are ready for them.  He preheats the oven to 500 degrees with the pizza stone inside so it gets hot too.  Meanwhile I prep the toppings.  While we're doing that, the kids are usually buzzing around, we're listening to music, and having a drink. 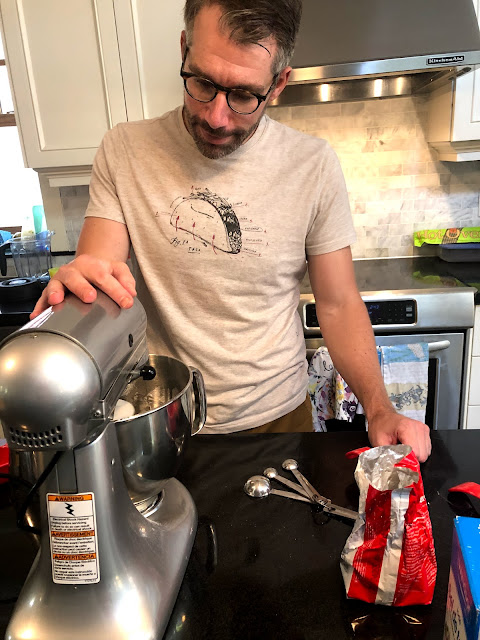 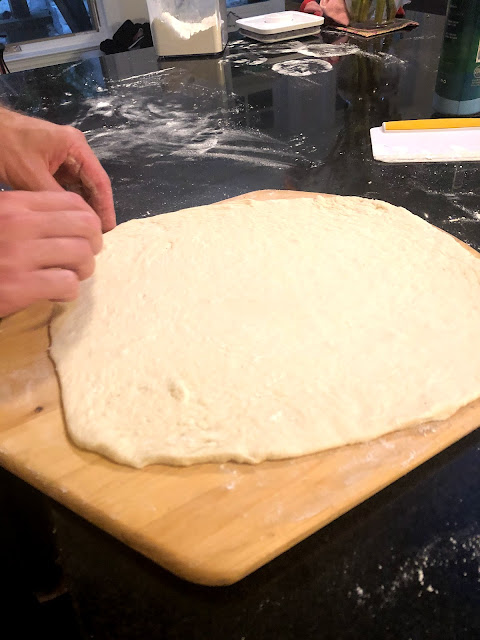 We do not precook the dough, the ingredients go directly onto the raw dough.  The pizza is assembled on top of a wooden pizza paddle, dusted with flour, and then Dave can slide it onto the hot pizza stone in the oven (dusted with cornmeal). 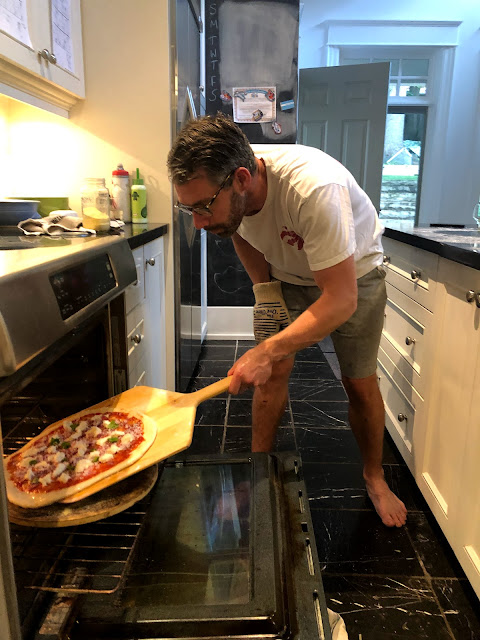 Q goes first.  He usually just puts cheese and salami.  He is pretty good at doing it himself, with some guidance.  His pizza is usually the best because the oven is hottest. 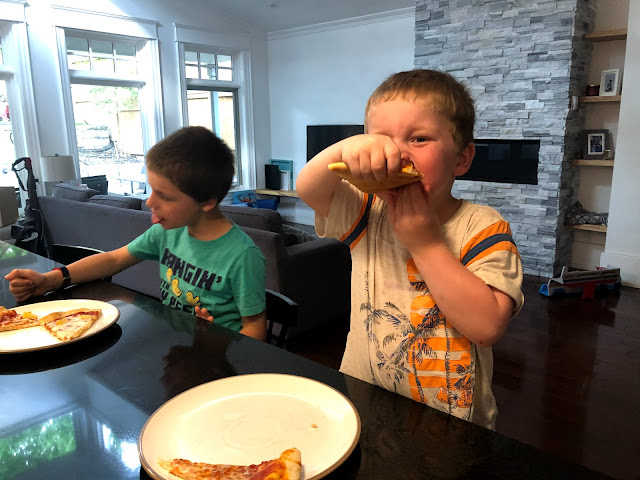 Then E makes his. He always has pineapple and ham on his. 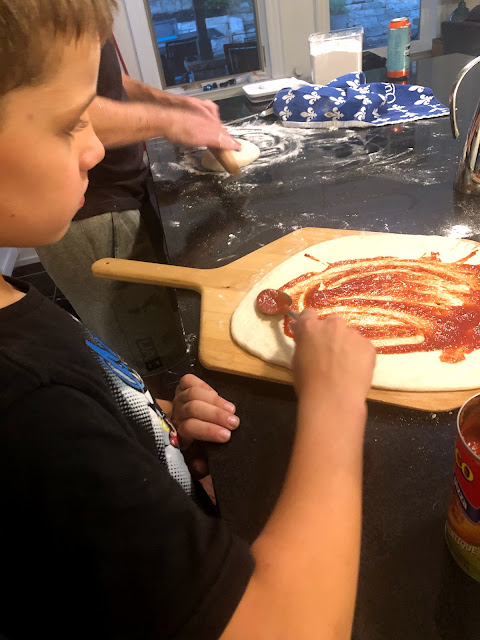 Then me.  I have usually stuck with black olives and sliced tomatoes, but will also add salami and mushrooms (precooked) if we have them. 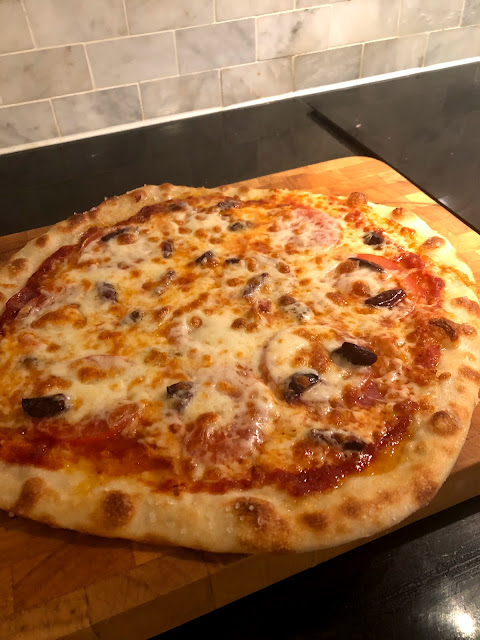 Dave is last, and if we have the fresh buffalo mozzarella, he will make a Margherita pizza with fresh basil from our garden, but otherwise he takes what is left of the salami and ham.

Each pizza is cooked one at a time and they have sit for a bit before we can cut them.  The kids eat fairly quickly and then we usually get a movie started for them, while Dave and I finish up our pizzas and tidy up.

My tips for ingredients - Cut everything small so it doesn't cause the whole thing to slide off when you bite in.  Drizzle olive oil directly onto the dough before you put your sauce on. If anything has extra liquid in it (like cooked mushrooms, tomatoes or pineapple) squeeze out as much moisture as possible before adding it to the pizza.  Use good quality mozzarella (like the big block from Costco), and a little goes a long way. Spread olive oil and sprinkle coarse sea salt around the edges of the crust before cooking. 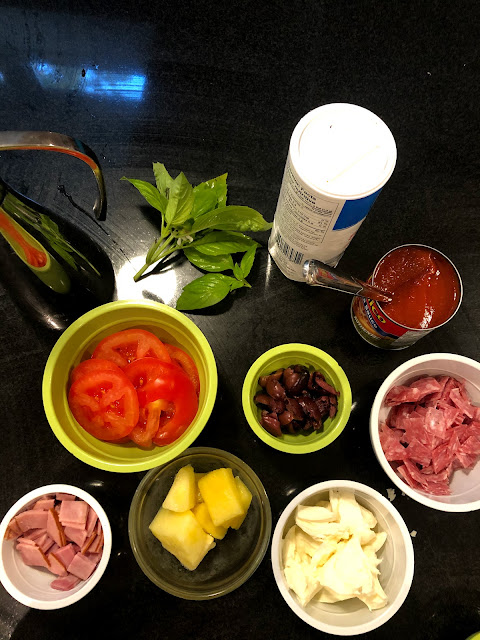 I used to feel like this was a lot of work but we have it down to a science now and we all really enjoy it.

1. In the mixing bowl of an electric mixer add hot water to yeast, sugar, and salt.  Mix lightly and let sit for 2 minutes.

2. Add 1 cup of the flour and mix with dough hook.  Let it combine.

3. Add remaining 1/4 cup of flour and drizzle some oil down the side.  Keep mixing.

4. As the dough comes together to form a ball, continue "kneading" the dough with the dough hook for 4-5 minutes.  The dough should now be smooth.

5. Collect the dough from the bowl and dough hook. Form into a ball with your hands. Spread olive oil over it.  Put in a clean bowl, cover with a tea towel, and let rise for 2 hours.

6. Before you're ready to use it, remove from bowl, form into a ball. Cover with a bit more oil, and let rest, covered, on the counter or a plate for another 30 minutes or so.