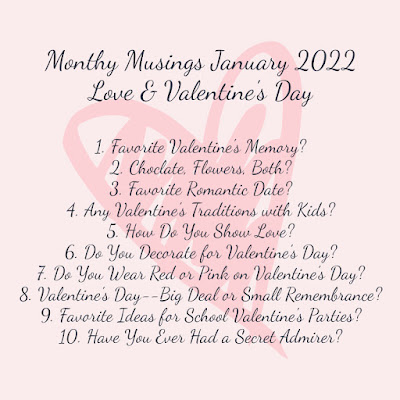 1. Favourite Valentine's Memory?
When Dave and I started dating, he made me a nice dinner and we ate it together in my room.  I know that sounds weird, but my apartment didn't have a dining area so we had to eat at my desk.
A close second memory was in Grade 3 when I got the new New Kids on the Block cassette tape and brought it to school to play it at our class Valentine's Day party.
2. Chocolate, Flowers, Both?
Flowers
3. Favourite Romantic Date?
A leisurely meal at a restaurant (preferably Italian) where we can order all of the things - cocktails, appetizers to share, bottle(s) of wine, mains, and dessert.
4. Any Valentine's Traditions with Kids?
We usually have pancakes or waffles with sprinkles and have a few heart themed gifts.
5. How do you show love?
By making food.
6.  Do you decorate for Valentine's Day?
Yes, we have a few things, including a banner to hang across the fireplace and some hearts for the windows.
7. Do you wear Red or Pink on Valentine's Day?
Yes.
8. Valentine's Day - Big Deal or Small Remembrance?
Big enough deal, like most holidays.  We like to recognize it and have an excuse for treats, but we don't go all out.
9. Favourite Idea for School Valentines' Parties?
Uh, see my answer to number 1 above, NKOTB dance party, am I right? Haha. Our kids don't do parties at school for anything anymore but any sort of craft that requires pink and red construction paper is a win.
10. Have you ever had a secret admirer?
I don't think so but who knows?  Maybe I was someone's cafeteria girlfriend at university and never knew.  The concept of a cafeteria boyfriend/girlfriend was this - at university I lived at Shirreff Hall at Dalhousie, and at that time, it was an all girls residence, but the co-ed residence, Eliza Ritchie, ate at our cafeteria too.  There were a few boys that we always had our eye on, and we would have our own cafeteria boyfriend that we would look for and try to maybe even speak to.  If you ever did speak to them then you were considered "broken up".  In first year I broke up with my cafeteria boyfriend (who was also in my English class) after I spoke to him at a party, and in third year I actually dated my cafeteria boyfriend in real life (incidentally we started dating on Valentine's Day).
Linking up with Holly and Patty.
Posted by TorontoSAM at 6:00 AM