Two books to write about this month.  I really thought I would do more reading on March Break when we were away but we were so tired by the end of the day there was no time for reading!

The first book I read was What I Remember, What I Know by Larry Audlaluk. 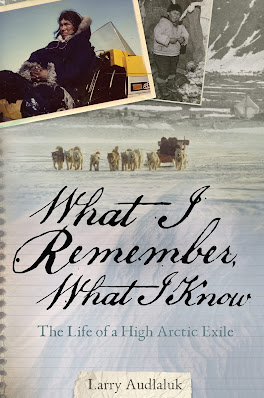 As you know I am a fan of Peter Mansbridge's podcast, The Bridge.  He was travelling in the North last summer and mentioned this book, written by his friend.  The author's family was one of the ones relocated from their homes from Northwestern Quebec to the Far North.  This was government policy in the 1950s as a way to claim that land as Canada's for sovereignty reasons.  The families were told that they would be well provided for, have more hunting lands, different opportunities, and when people showed hesitancy, were outright lied to saying that others had agreed to go so they should to  (telling everyone that same story).  They were also told they could move back anytime, which was also not true.  When they arrived up in the Far North, they were very unfamiliar with the land and game up there and had a hard time surviving.  They were not given the supplies and support they were promised.  Larry's story starts there and then takes us through the rest of his childhood, early adulthood, and into the present.
I don't know how they survived the elements in tents, feeding families only by hunting and gathering, but they did survive, despite many tragedies.  It was also a good reminder about how slow everything used to be - slow communication, slow travel times, long days that stretched out for the kids with "nothing to do".  Not only is it an environment I am unfamiliar with, it is a time that is gone now.
What I know about Indigenous history in Canada is pretty sparse, and this book is a wonderful tool to add to one's knowledge.  Not only was the relocation policy something I've only just recently heard about, I also heard about how the Northern communities were checked for tuberculosis, moved to hospitals, and had "escorts" when travelling out of the North to Ottawa and Winnipeg and wherever.  I liked hearing about the different job opportunities people had and how they had relationships with the RCMP, naturalists, and visiting Greenlanders.  Fun was had even with the challenges they faced.
The other thing to be reminded of is that Indigenous people, Inuit, Far Northern communities, they are not all the same, everyone has a different story and we need to know these nuances.  We hear a lot about the horrors of the residential school system, and I am not dismissing that at all, but Larry didn't have an extremely horrible experience, he did not love being away from his family but he had many good memories from the school, and other places he stayed.  I also appreciated his commentary about being pulled in two different directions - following traditional practices but still wanting the "modern" life.  It's an internal struggle that is probably not unique to Indigenous people but also immigrants to Canada.
If you can find this book, read it.  I got it at my library so it's out there.  Would be good for teenagers to read too.

The second book was Anxious People by Fredrik Backman. 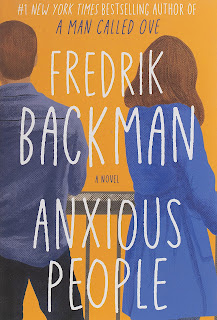 This is a popular book that many people had recommended.  Although I am a fan of this author, A Man Called Ove is one of my top five favourite books, I wasn't sure if I liked the sound of the plot.  But after enough people said to read it, I decided to add it to my reading list. The book is about a bank robbery/hostage that doesn't really go according to plan.  I was kind of annoyed with the story and the various characters at the beginning, but then about half way through it all clicked for me and the author's writing that I know and love grabbed me and took me to the end.  He is so good at tugging at your emotions with his writing with a turn of phrase.  He creates heartache and hope all at once.  I realized later that the annoyance I felt with the characters was on purpose.  If you've enjoyed his other books, get this one too, you won't regret it.
Posted by TorontoSAM at 6:00 AM