Prince Edward Island is one of my favourite places in Canada.  I have visited many times and most of those times have been to visit my good friend Cindy.  I met her in law school and she was maid of honour at my wedding.  Dave has been going on golf trips with his buddies since I've known him and they often go to PEI.  This year I tagged along to stay with Cindy while Dave golfed.  E stayed back in Ontario with his grandparents. 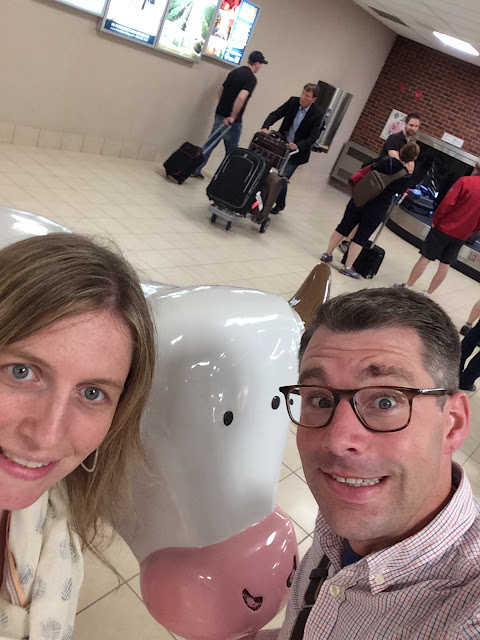 At the Charlottetown airport

We arrived on Thursday afternoon and went to Cindy's new house.  What I love about Charlottetown is that everything is so walkable.  Dave's hotel was actually 400 m from Cindy's house, and the bar where we went to eat was a couple of streets away from both.  Cindy and I went out with the boys for some drinks and food.  They also had trivia with questions I could actually answer, and my team won 4th place which was a $20 bar credit. 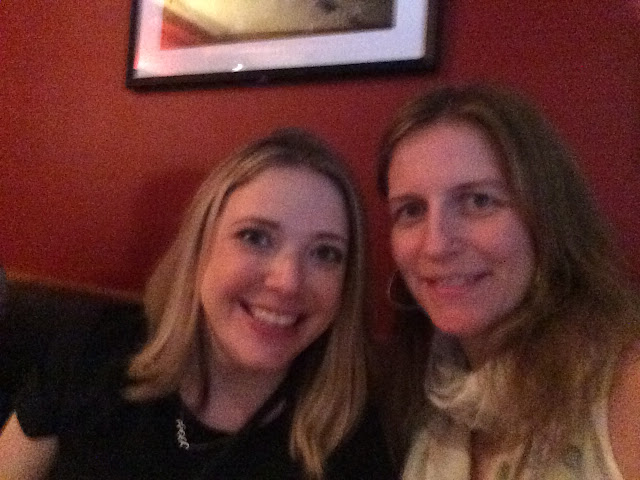 Cindy and I at Hunter's Ale House. Their menu is extensive, but I decided on the chicken curry poutine, it was amazing, but since their portions are huge, I was unable to finish it.

The next morning we went for a walk around downtown Charlottetown to get some coffee.  This is such a great tourist town but the season hadn't really started yet. 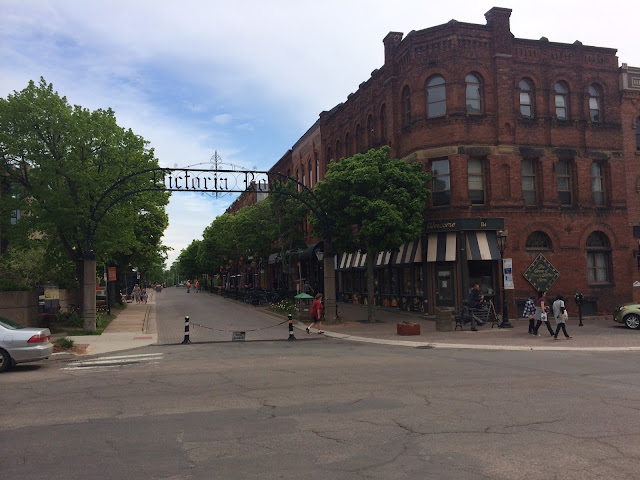 Victoria Row has lots of restaurants, bars and shops. 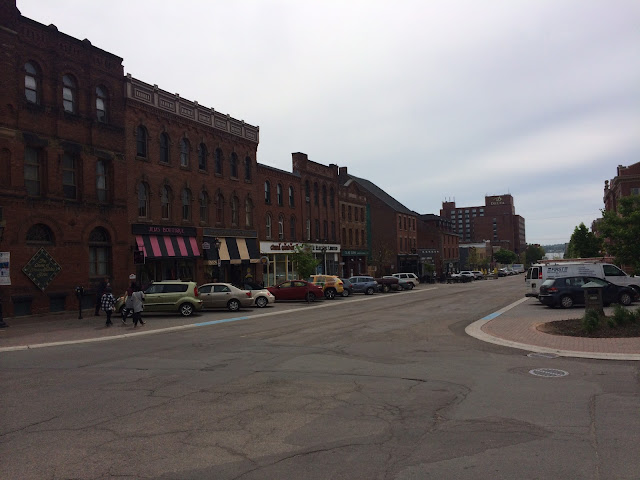 Looking down Queen Street toward the water. 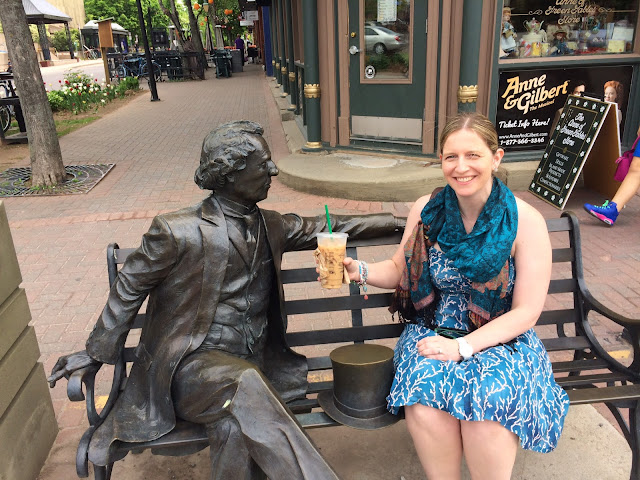 I did run into John A. McDonald and offered him some of my iced coffee 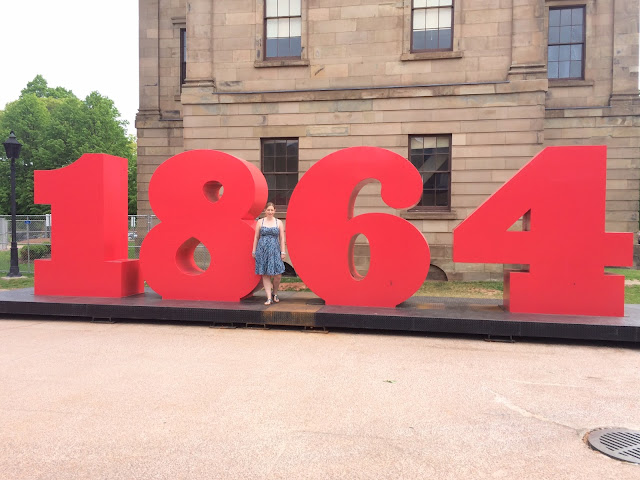 The year when the Fathers of Confederation had their infamous meeting on the Island.

For fans of Anne of Green Gables or Road to Avonlea, you will recognize the building below.  It is the White Sands Hotel, otherwise known as (its real name) Dalvay by the Sea.  We went here for lunch on Friday and met Cindy's mom and our friend Jonathan.  It was lovely, and the food was tasty, but again, not a lot of people there yet. 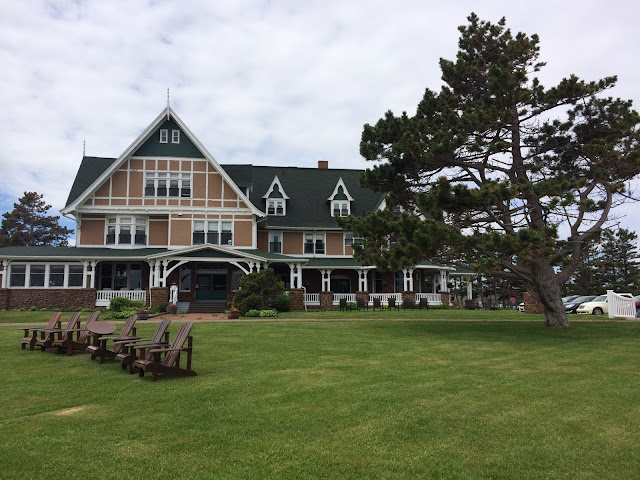 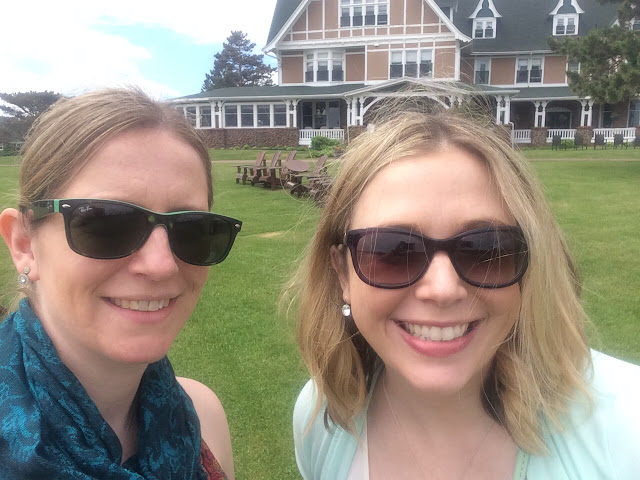 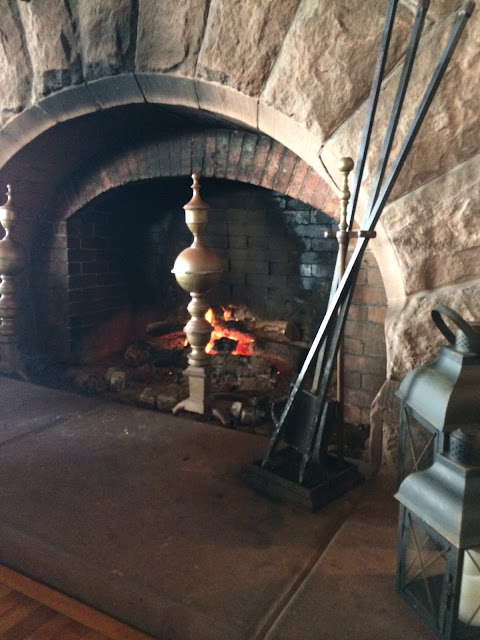 They had a nice fire burning in the lobby.  It was quite cozy.

We had an easy afternoon and evening which was great.  One of the things that is nice about travelling without kids is that you don't have to constantly worry about keeping someone else entertained and fed. 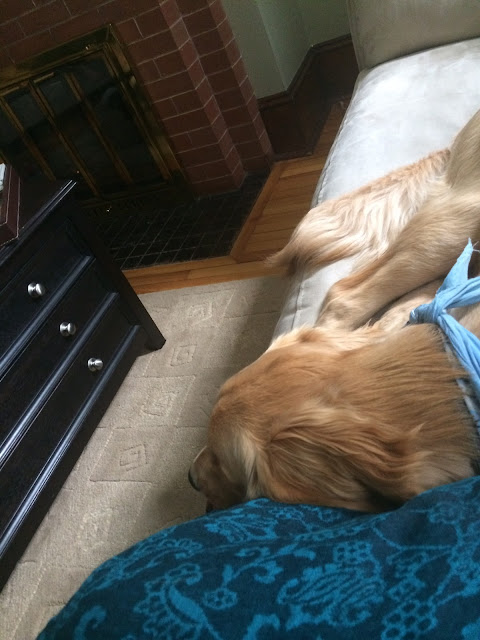 Tucker and I watching some TV.

On Saturday morning we went to the Receiver Coffee Co. to meet up with one of my friends from university, Laura.  We enjoyed some really tasty coffee (with the roaster going in the corner while we sat there), our breakfast, and the welcoming atmosphere. 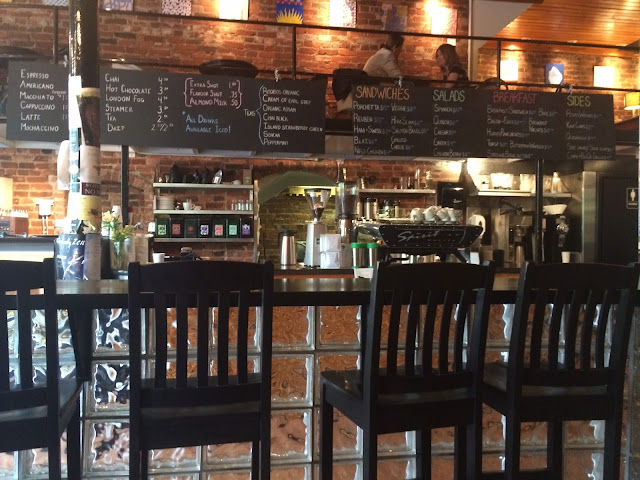 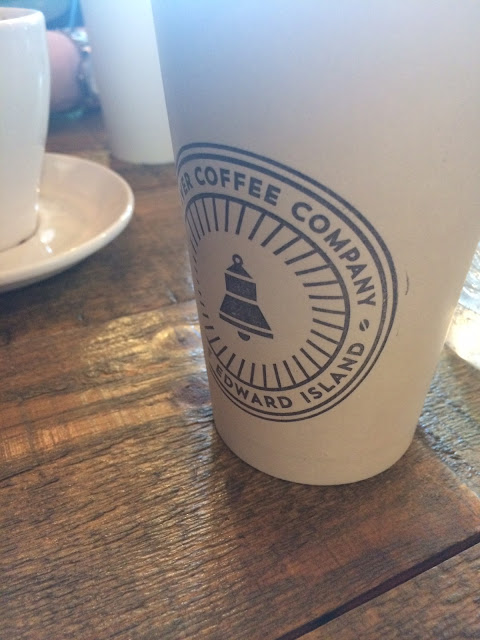 Not only was it great to catch up with Laura, I also got to use the opportunity to get a sneak peek of Upstreet Craft Brewing, where Laura's husband happens to be the co-founder and master brewer.  It was a privilege to be invited to the brewery and see how they are getting started with this business.  They should be open in a couple of weeks, and the Island seems ready to embrace this new venture.  I can't wait to visit next time and sample their brews. 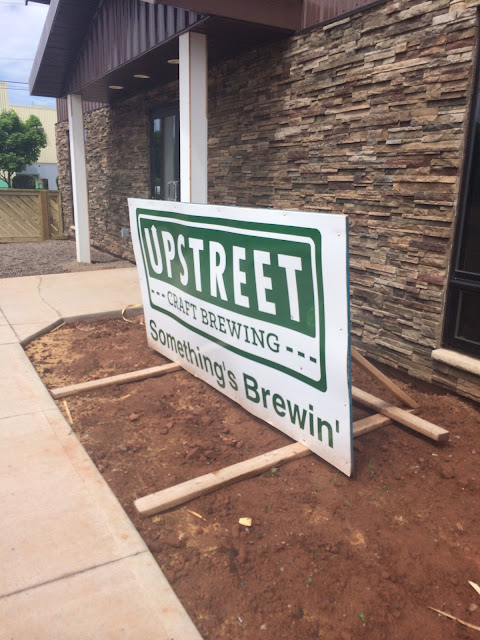 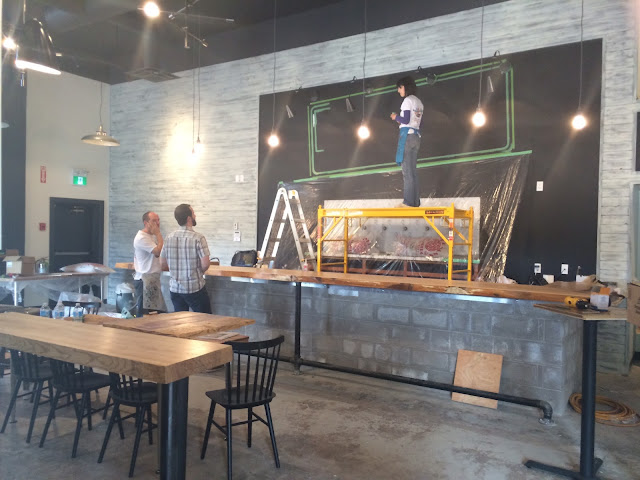 The tasting room, getting a chalkboard wall with painted logo.  The bar is actually made from one of the large elm trees that had to be cut down over the last year in Charlottetown.  The elms were infected.  It was a pretty big deal for the city, so to be able to see one of the salvaged (and kiln fired to kill the infection) trees used here will be meaningful to many. 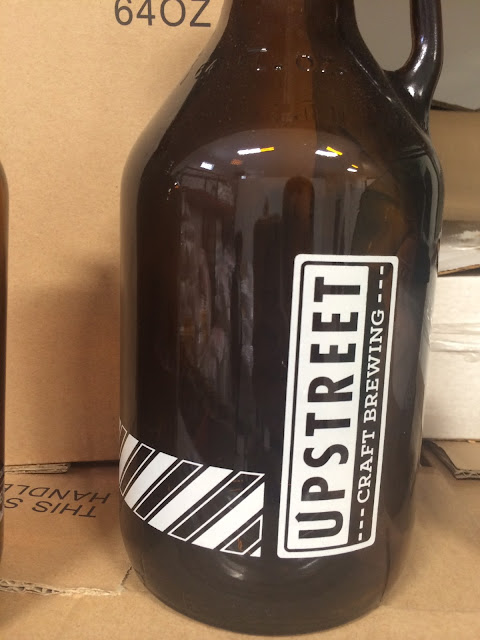 One of the growlers ready to be filled. 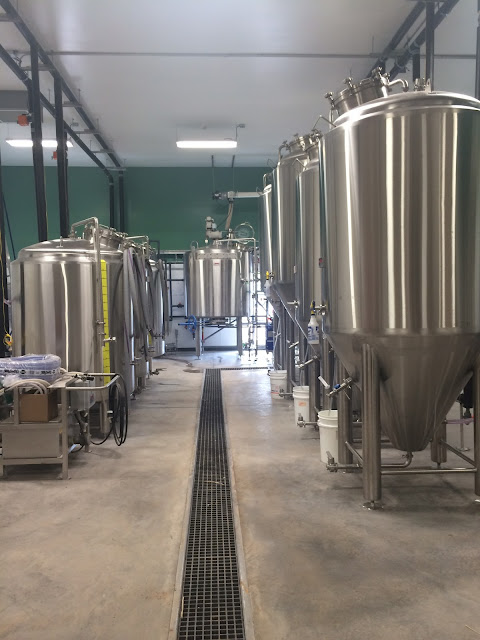 State of the art machinery, all made in Charlottetown as a matter of fact.

We had to make the requisite stop to Cows for an ice cream and to pick up some souvenirs.  Then we went to see the Entourage movie.  I really liked it; it was pretty much an extended episode which was all I was looking for. 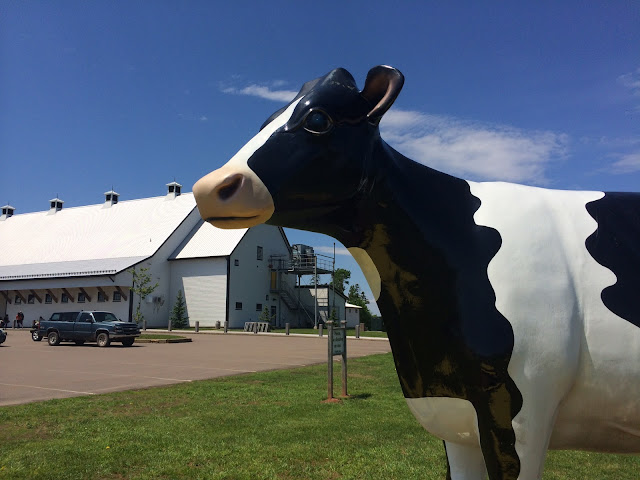 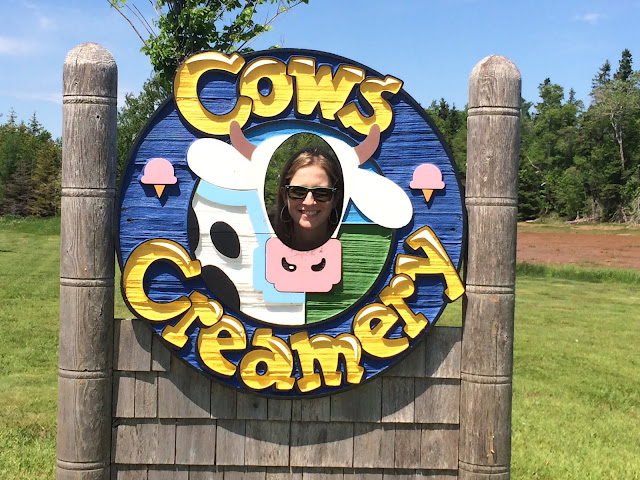 For supper we went to Terre Rouge for supper.  I had a very large bowl of mussels, one of my favourite wines, and the chicken dish.  We all enjoyed our meals and our waiter was great. 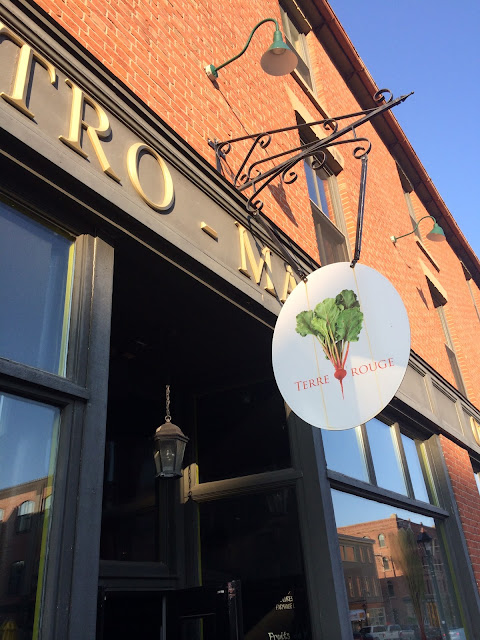 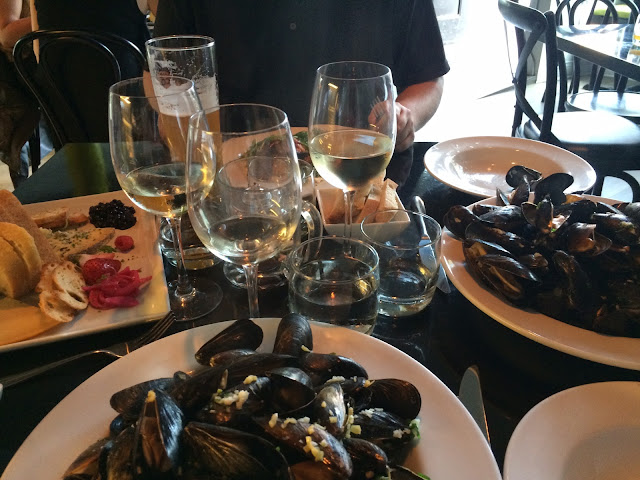 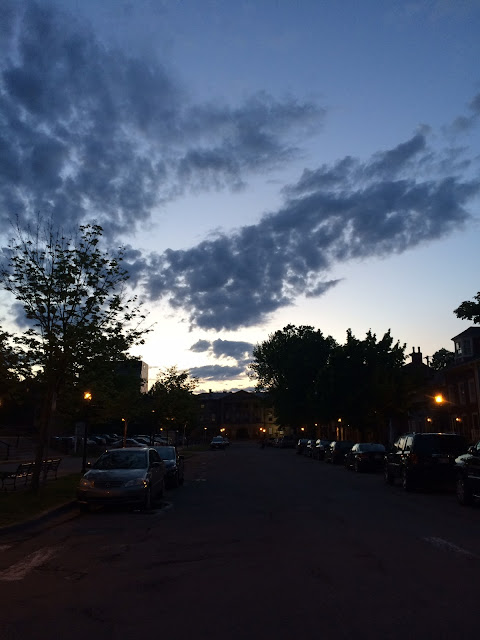 Walking home. This is supposed to be Province House in the night sky but it's a little too dark to see it. 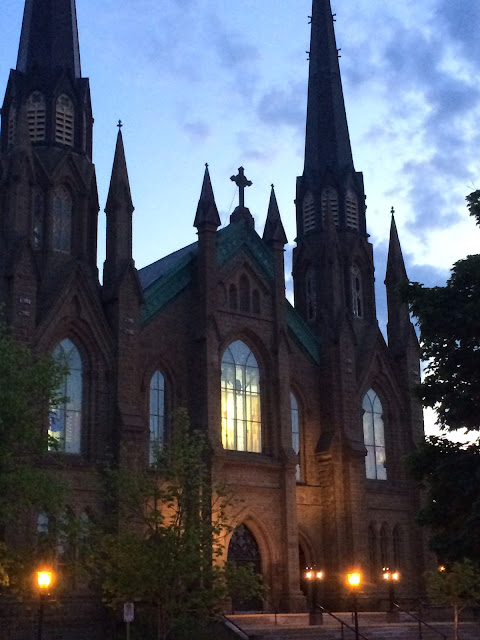 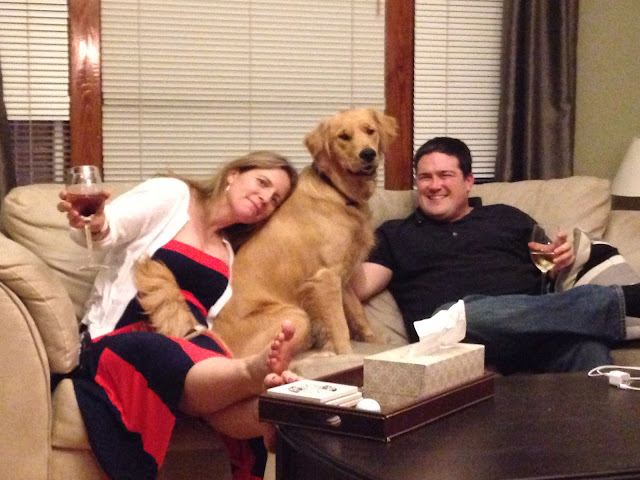 Me, my new friend Tucker, and Jonathan

As usual, when I leave PEI, I am excited to return.  There is so much more to see and do.  If you have never been there, book your trip now.