This month's book club's selection was The Girl on the Train by Paula Hawkins.  I'm probably one of the last people who has read this book since it has been around for awhile and on everyone's reading list. 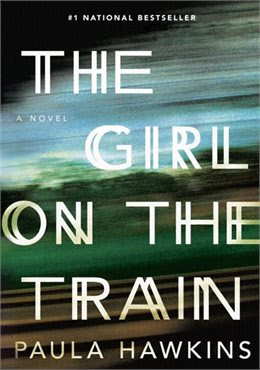 I have seen the movie twice, before reading the book, and that sort of ruined the book for me.  The whole appeal of the novel is that it is suspenseful and you don't know the connection between the three women telling the story and that Rachel's memories from the night in question are missing.  Since I knew what was going to happen, I found the book to be a long slog through to the end.  I read it because I wanted to finish it for our book club, but if I had picked it up just for fun after seeing the movie, I would have stopped reading it.

Last year we read Gone Girl and I saw the movie after reading the book.  The movie was of course less good for me since I knew the ending.  For stories other than these suspense novels, I would still recommend watching the movie first if you can because the book will inevitably be better and you can still enjoy both.  However for The Girl on the Train and Gone Girl, and similar titles that will probably be made into movies at some point (The Woman in Cabin 10, etc.), I would say what I said last year in my Gone Girl post, if you like movies, watch the movie first (and then probably skip the book), if you like books, read the book first.

I did not like that they changed the setting of the movie from England to New York.  I guess North American audiences can't identify with a British setting? I suppose that the sweeping train scenes with the larger houses on the banks of the lake look better for the movie than the smaller houses backing right onto the train tracks in the suburbs of London.  Maybe I'm just biased because I love anything British, so I would have been quite happy with that setting in the movie so everyone could have an accent, not just Emily Blunt.

Anyway, so as you can tell, I wasn't a big fan of the book.  I'm looking forward to reading some book with some "substance" in the upcoming months.