A busy weekend for everyone here!  Dave's parents arrived for the weekend on Thursday evening.  On Friday Dave and his dad went to Home Depot for some supplies to renovate our tree house. 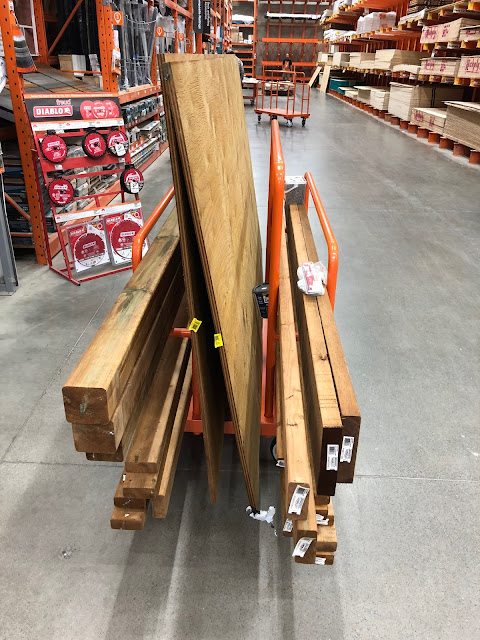 This is the "before" shot while they supported the floor to replace the posts. 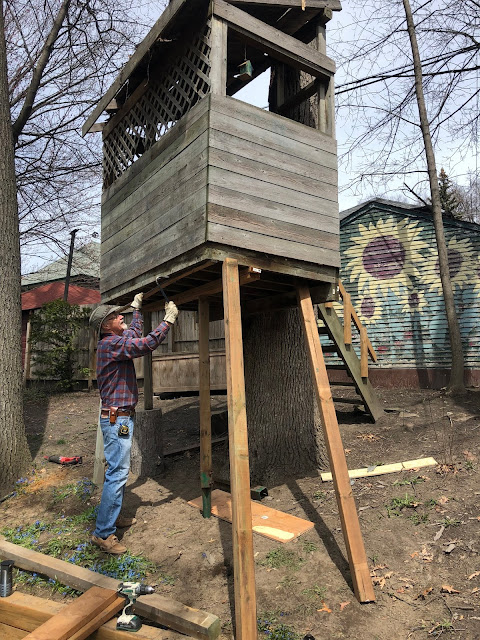 On Friday night Dave's parents went to see Come From Away, and Dave and I watched the Raptors game.   Up early on Saturday morning for my barre class and Dave got breakfast ready.

I snapped this photo before going on a walk with E up the street. 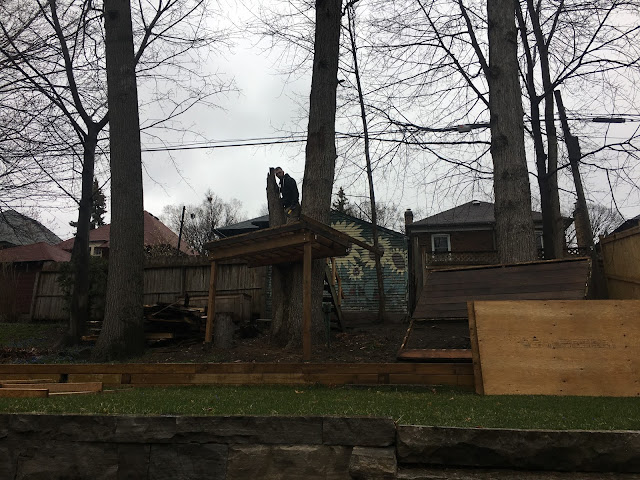 I had asked him if he wanted to go for a walk with me (and bring money to buy candy at Bulk Barn) or work on the tree house with Dad.  Hard choice.  We had a fun walk up the street and he picked out two kinds of candy and those sour cream and onion puffs. 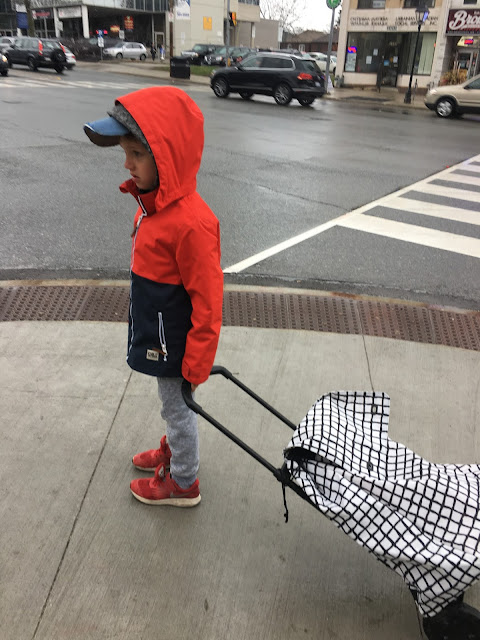 After lunch, the work continued on the tree house, and Q joined in after his nap. 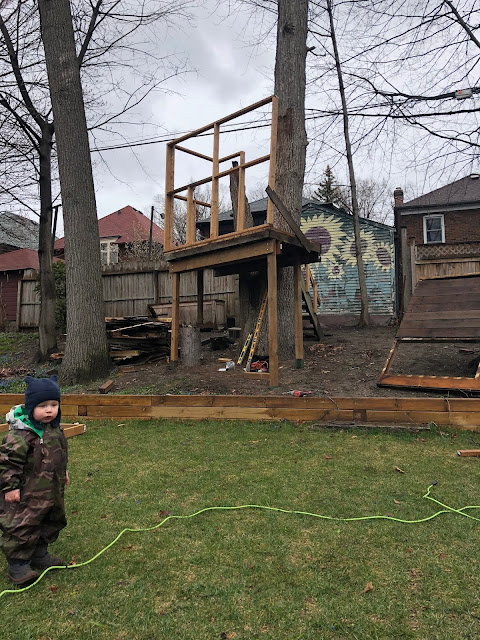 Dave's mom and I headed off to a bridal shower for Dave's cousin.  One of the games was a cupcake decoration contest.  My cupcake won a prize! 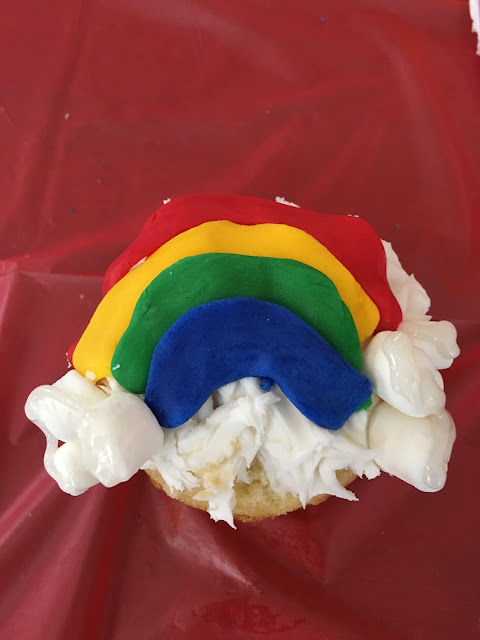 Dave's mom with the homemade cake. 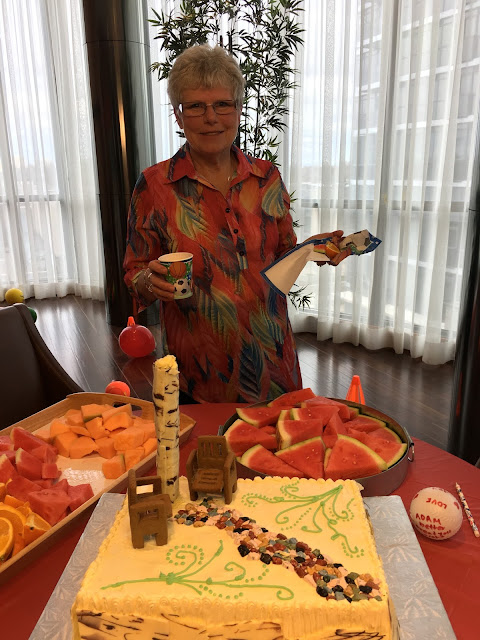 The bride-to-be, her sister-in-law, and me.  The bride's skirt is made out of her mother's wedding dress! 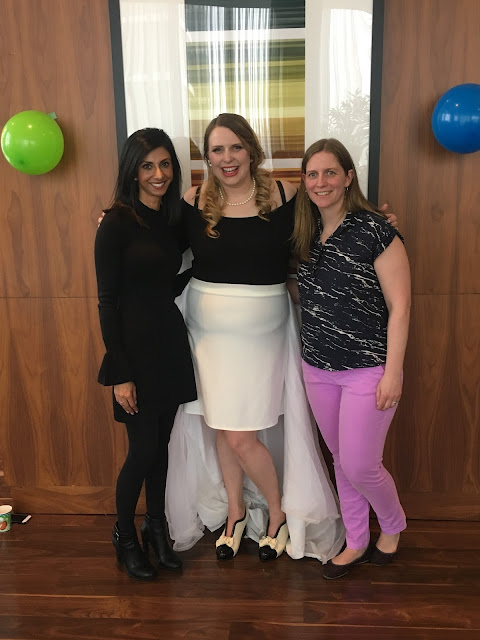 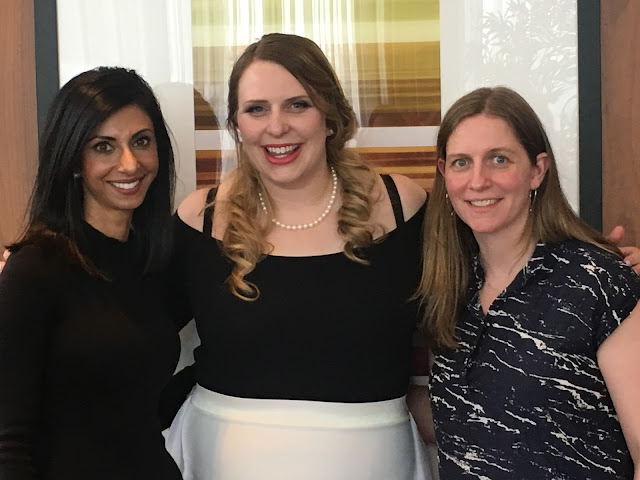 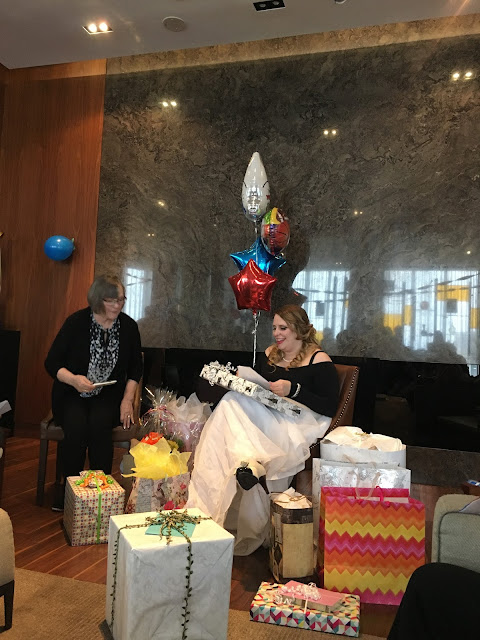 We had superfood salads for supper - assemble your own. 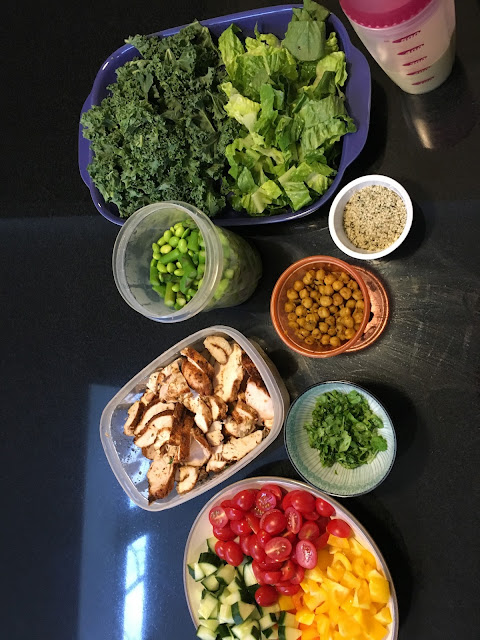 And then toast with jam for those who did not enjoy the salad ;) 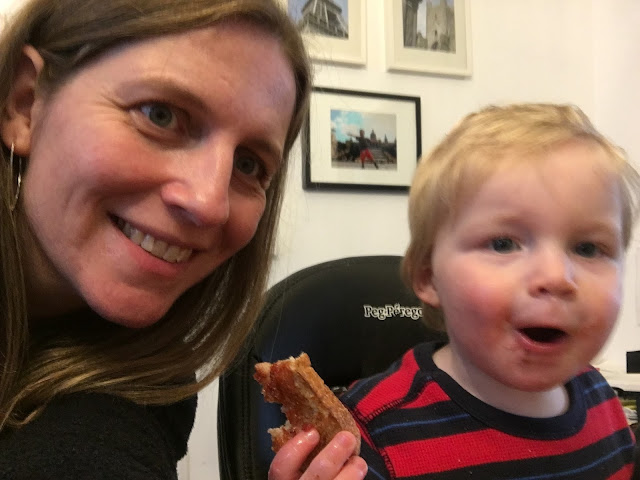 A round of UNO after supper. 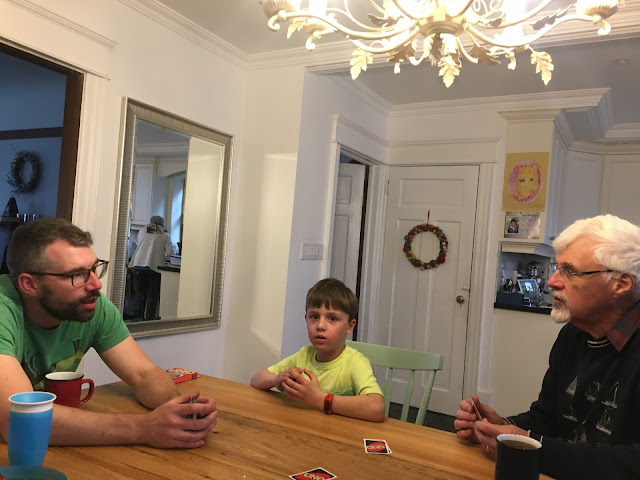 Dave and his dad went to see the Avengers movie, and I watched the Malala and Jay-Z episodes of My Next Guest with David Letterman.

The sun was out on Sunday, although it was chilly.  Dave and his dad went for a run, and then I went on my own run. Post-run snack. 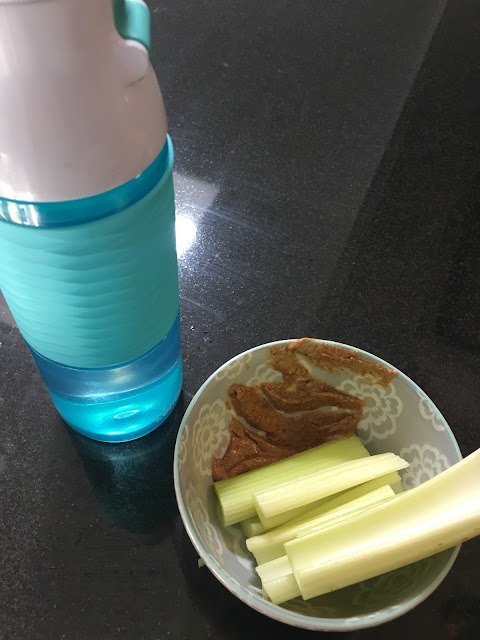 Work resumed on the tree house.  They did most of the work but there are a few things for Dave to finish up. 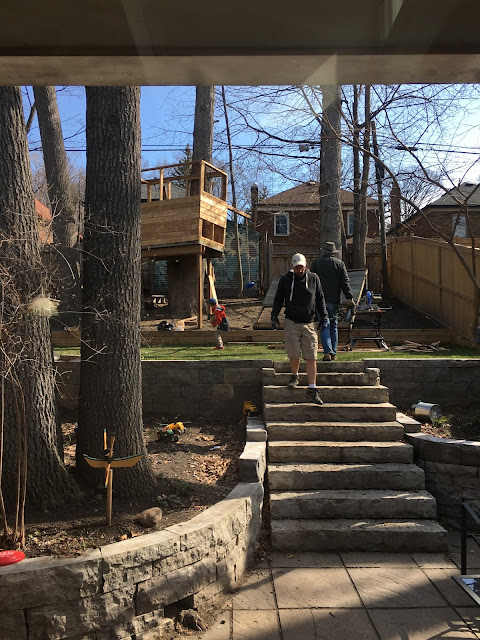 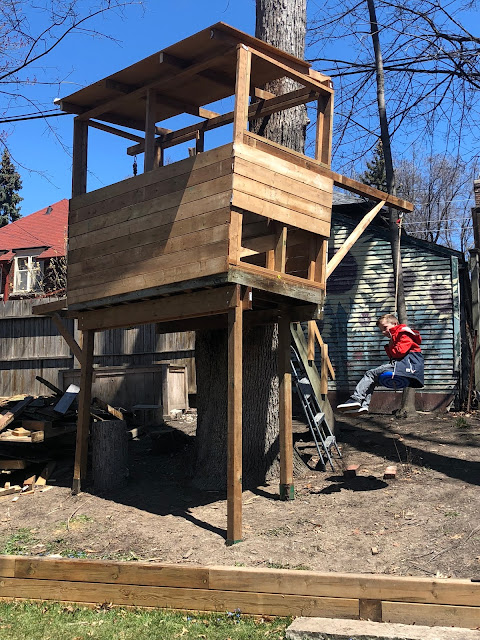 Then we all got cleaned up and went to a baptism for our friends' daughter.  It was a Greek Orthodox ceremony. 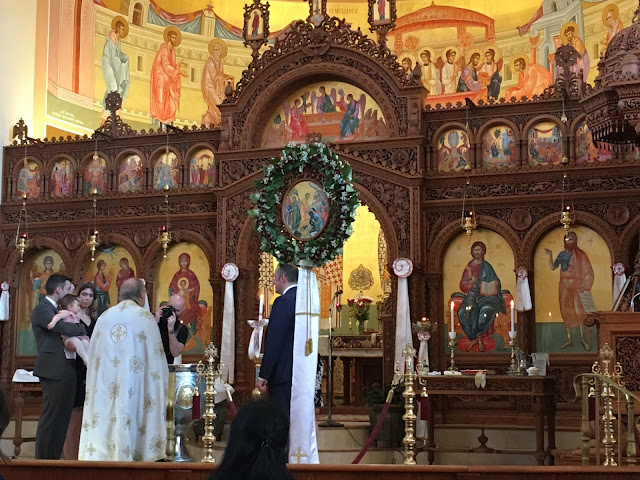 Then we went to the reception.  The boys had so much fun.  Q had never seen a buffet (for the appetizers) before so he enjoyed choosing a few items for himself.  Then they brought chicken fingers and fries for the kids and he loved that too!  He loves the ketchup! 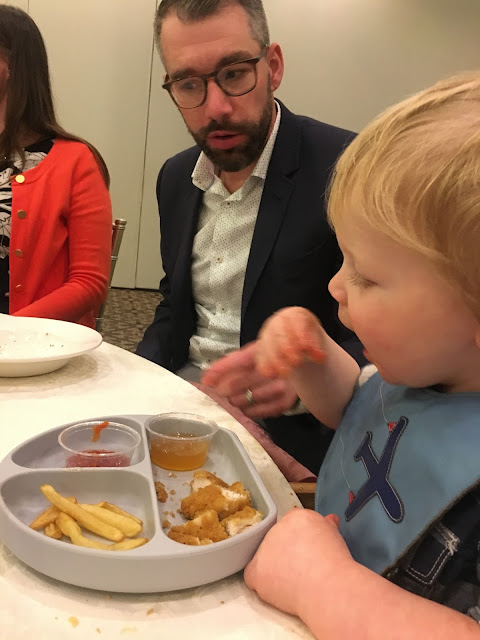 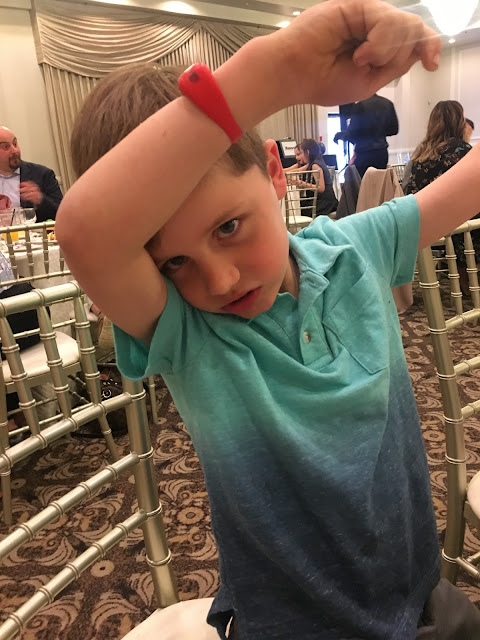 When the Greek dancing started, E found himself in there with the family and he kept up pretty well!! 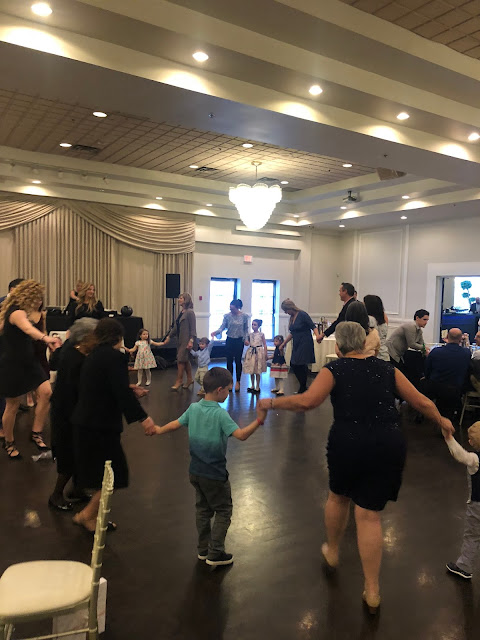 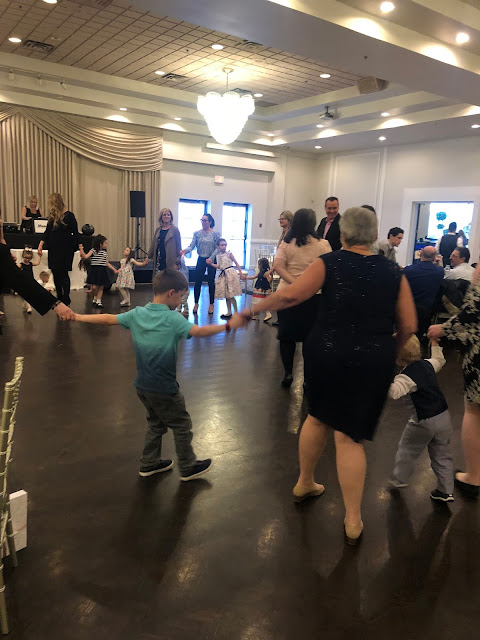 We weren't too late coming home, but it was right to bed for both boys while Dave and I relaxed before an early night for us too!