I read two books this month, one was a birthday gift from Dave and the boys and the other was on my reading list.

Dave often buys me a book for Christmas or my birthday, and this year he picked out Sing Unburied Sing.  I see it is currently on some best seller lists so even though it wasn't part of my reading list, I thought I should write about it in case others were interested in it. 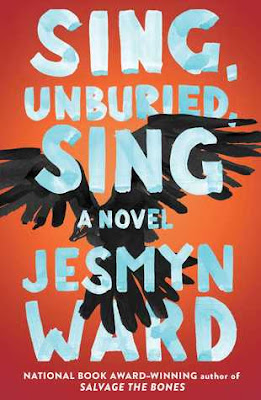 This story is set in the south, in the present day, but it reminded me of a Faulkner novel (if you've ever read those).  The people are in sad circumstances and there is very little hope, or so it seems.  We meet a young boy who lives with his grandparents, mother, and baby sister.  His father is in jail, his mother is rarely around, and his grandmother is dying.  He seems like a smart young man who wants to do the right thing, listens to what his grandfather tells him, looks after his sister, and tries to stay out of trouble.  There were many instances where I felt so sad for him and wondered how he could ever find a way to succeed in life when it seemed like everything was against him and his mother wasn't very nice to him.

The title comes from the few "unburied" people who appear to the boy and his mother at different times to speak to them.  I did not really care for that part of the story; I didn't think it really added anything to the plot, other than perhaps getting some backstory about the grandparents.

It was a quick read once I got into it, but it was depressing.  I would have liked it better if there was anything uplifting about it, but it was one sad scene after another.  The boy does nothing wrong and yet seems doomed.  It does seem to be popular though, so if you like a good old Southern book, pick up this one.

The other book was Exit West. 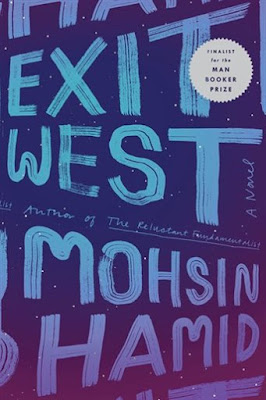 This was unlike any book I have read before and I do recommend it if you're looking for an intelligent but still easy read.  The topic is particularly timely as it focuses on two people, Nadia and Saeed, as they flee the war happening in their country as refugees.  We hear a lot about refugees now, where they are coming from, why they are leaving, how they get from place to place, and their impact on the countries where they end up.

We are never told what country Nadia and Saeed are from, although you could guess it is Syria or Afghanistan since you know there is a war between the government and rebels, and Saeed is a Muslim, and Nadia wears long black robes (not because she is religious but to keep men away from her).  I don't think it is really important where they are from exactly, but you get an idea of how people get caught in their home country until it is too late to leave safely.  I always wonder why people don't leave when things start getting bad, but since change happens slowly and then all of a sudden the situation becomes dire, you can understand a bit about why people get stuck there.

Getting from place to place is taken care of by a neat little trick (I don't like to give anything away), but I liked it.  Travelling out of a war torn country to a refugee camp, and then to another country where you may be a little safer, would be a novel enough on its own.  This book, rather, focused on what happens after Saeed and Nadia arrive, and their experiences in each place.

I realized later that no other characters are given first names, which I think just highlights that the story is about the two individuals and their journeys.  Perhaps because it is easy to sweep all refugees and migrants into one category without giving them any personality.  Since everyone seems to be on the move in this book, we could get carried away by following more people, but this way we may hear details about other individuals, but since they aren't named, we move on and back to our main characters, Nadia and Saeed.  When you stop and think that this is how people live in this day and age, and compare that to most of us who just happened to be born in a safe and wealthy land, you can really get some perspective and empathy for others' experiences.

Add this to your reading list.
Posted by TorontoSAM at 6:00 AM