This first picture is actually from Thursday night.  Q and I read a few books and then he went over to his crib, grabbed his soother and little guy that he sleeps with and then laid down on the floor.  So I guess it was time for bed! This was a full half hour before his usual bedtime. 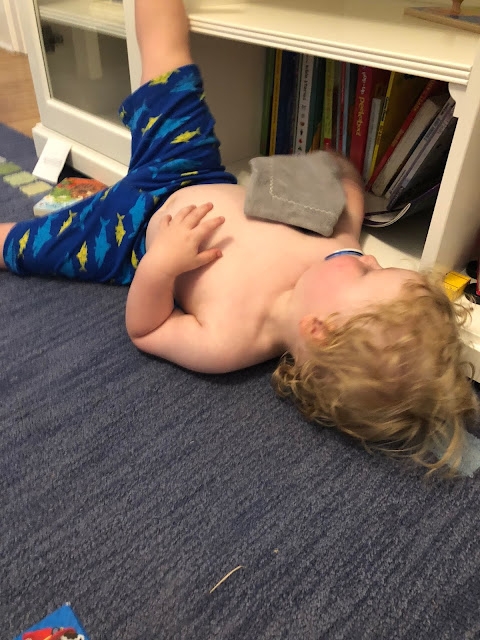 On Friday morning I went to a client's house for a meeting.  He lives on the Scarborough Bluffs and this is the view.  What a spectacular morning! 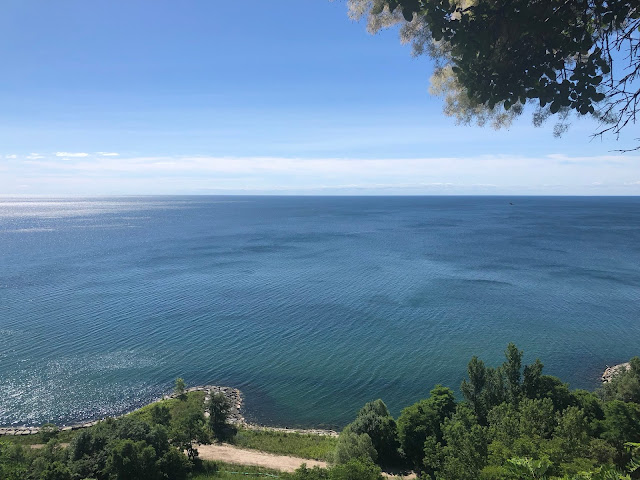 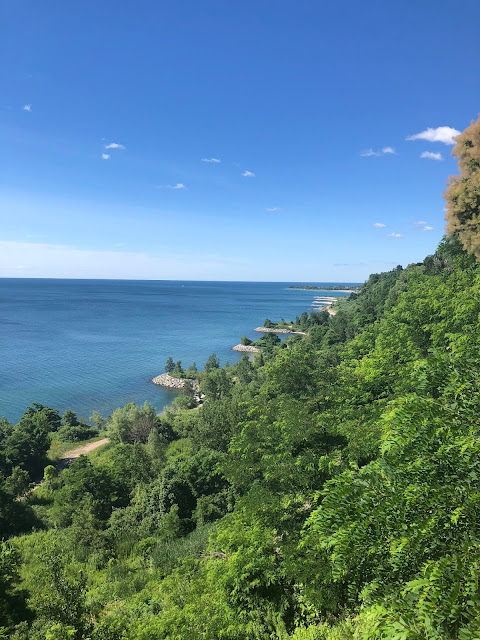 I picked up E from camp and then we got some groceries.  It was our plan to make pizzas for supper but we could only get frozen dough and so we decided to have leftovers and save the pizza for another night.  And since we had an easy supper we had time to go for a bike ride.
Mandatory snack when we stop. He knows where the good stuff is. 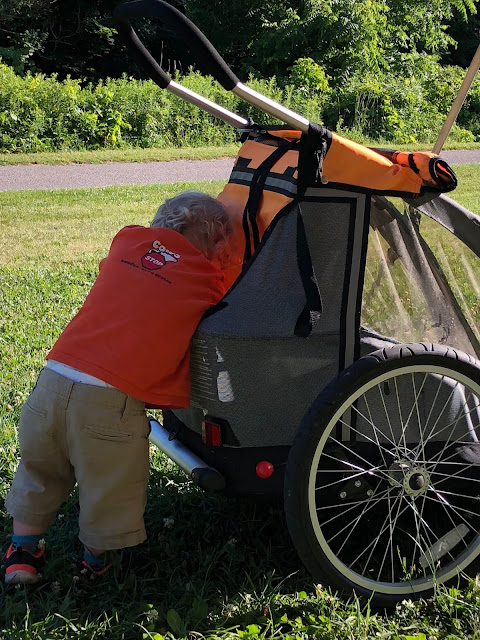 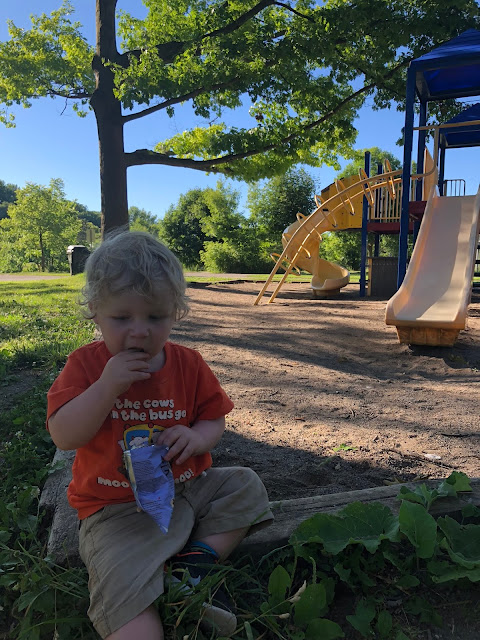 A game of catch. 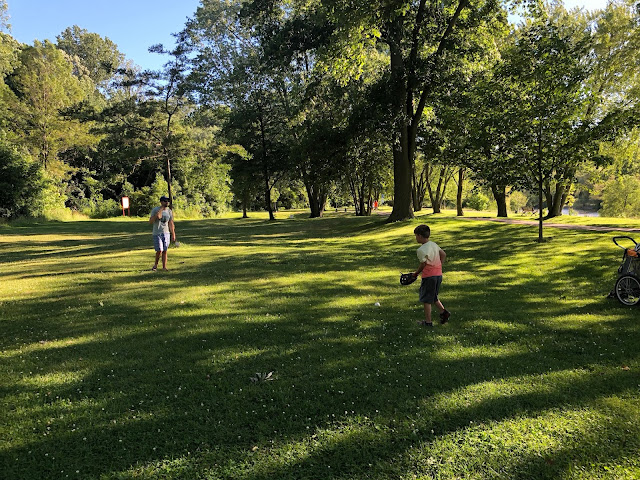 Ice cream cones when we got home (with sprinkles and candy). 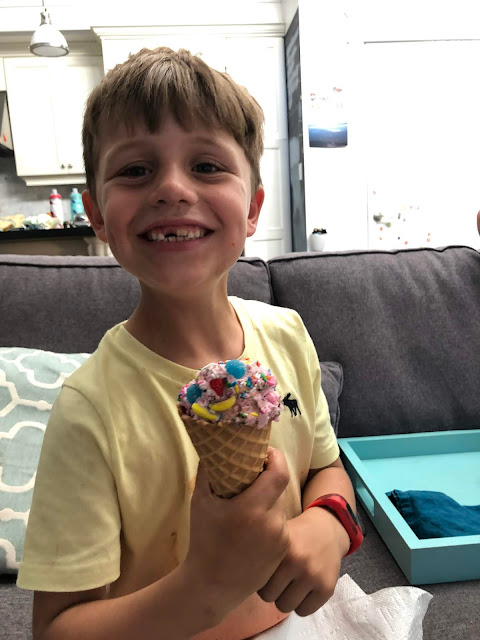 On Saturday morning I was actually the first one up as I snuck out of the house to go to my workout class.  I biked there and it was such a lovely morning with no humidity. 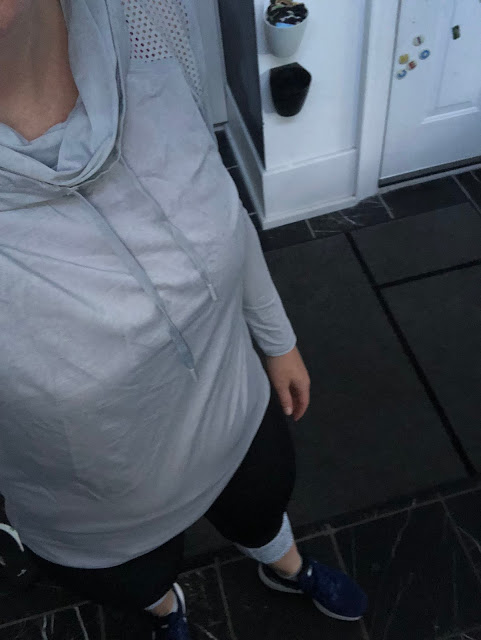 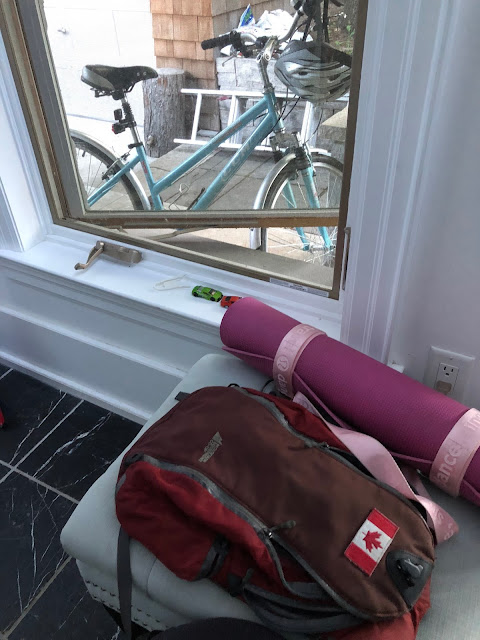 Then when I got back Dave went for a run and Q went to nap, so E and I watched the England World Cup match. 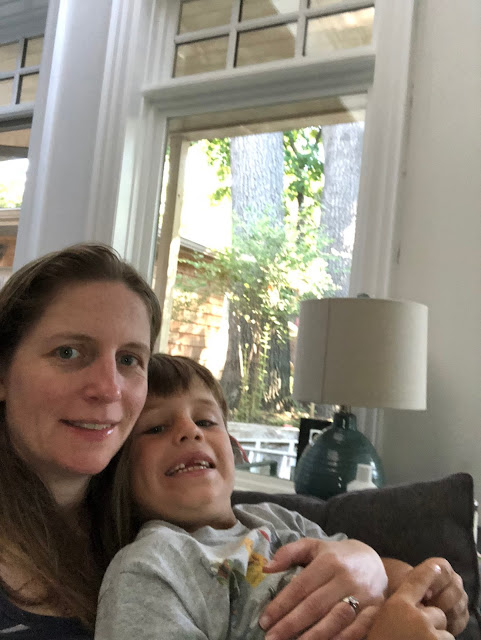 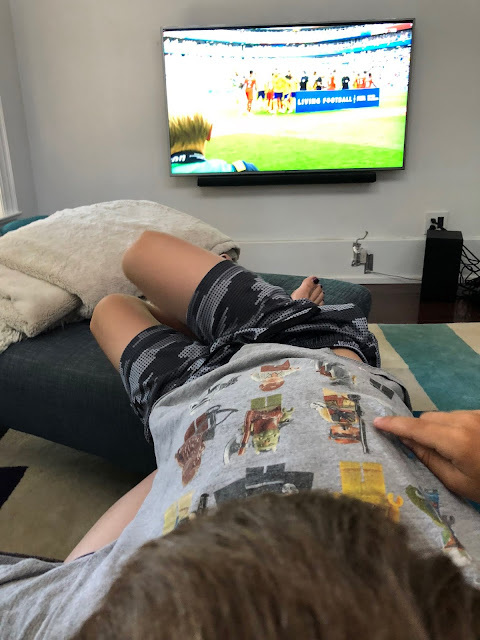 Since the England game was taking care of itself, I did a bit of baking, and Dave did some yard work.
A small snack of goldfish when Q woke up. 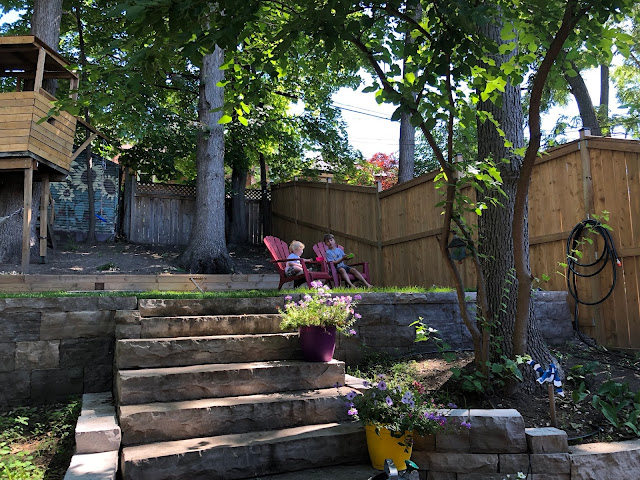 We had lunch and then Q had another nap, while E watched some TV.  It's hart to see but Dave is in the hammock and I'm laying on the grass. 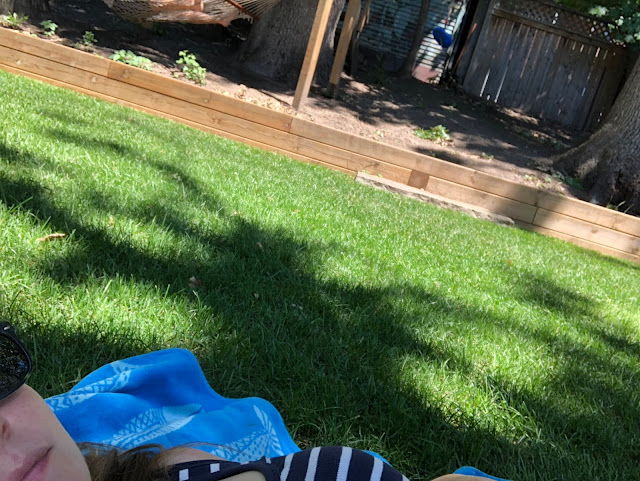 Then we got ready for the Blue Jays game.  It was Q's first time on the subway without being in his stroller.  He loved it. 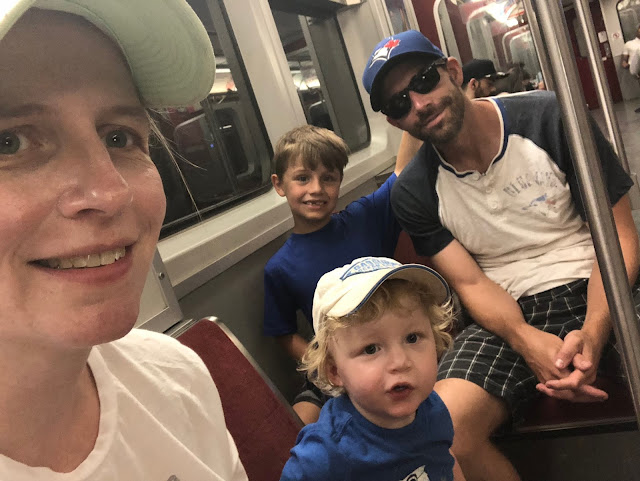 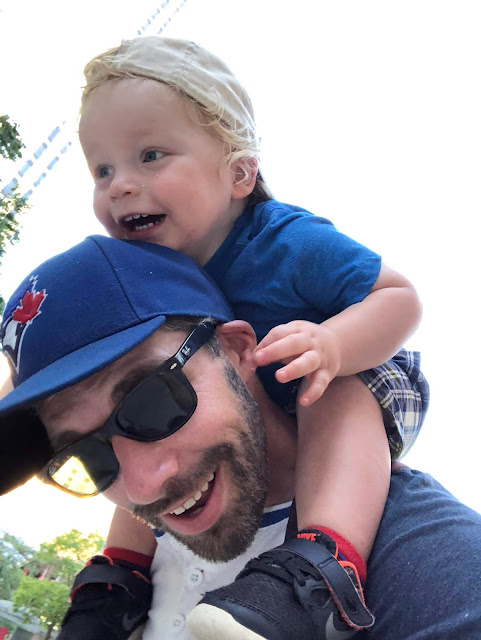 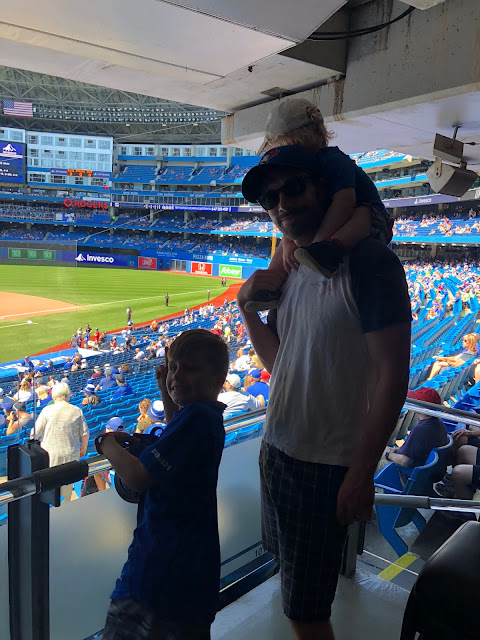 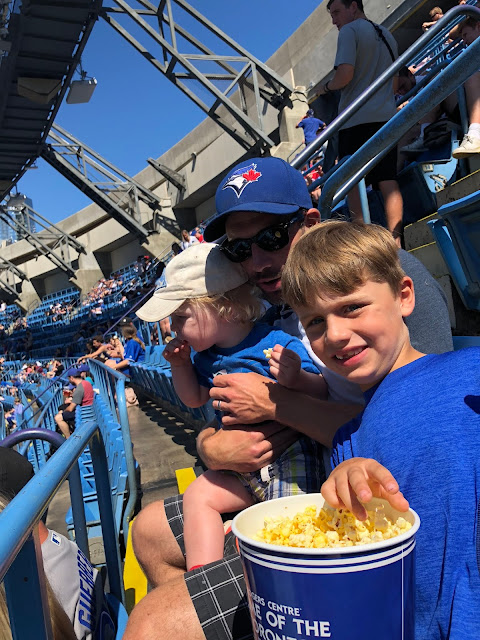 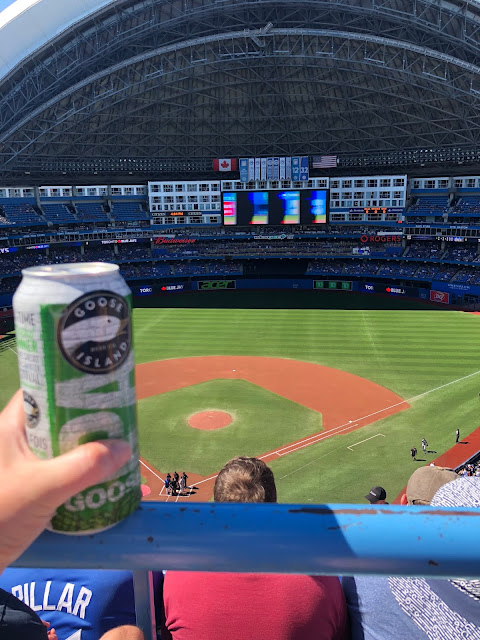 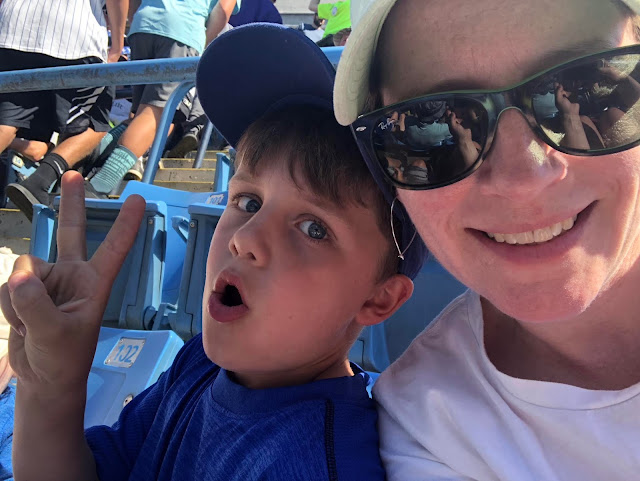 Everyone loves the popcorn.  Q actually put his face into the bucket to eat it (Dave would say "like mother, like son"). 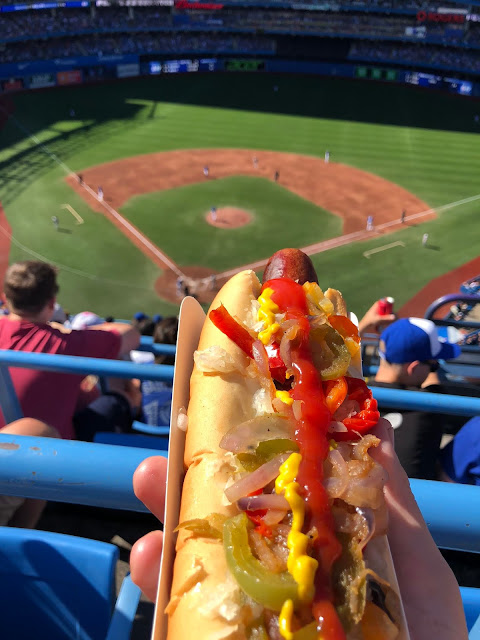 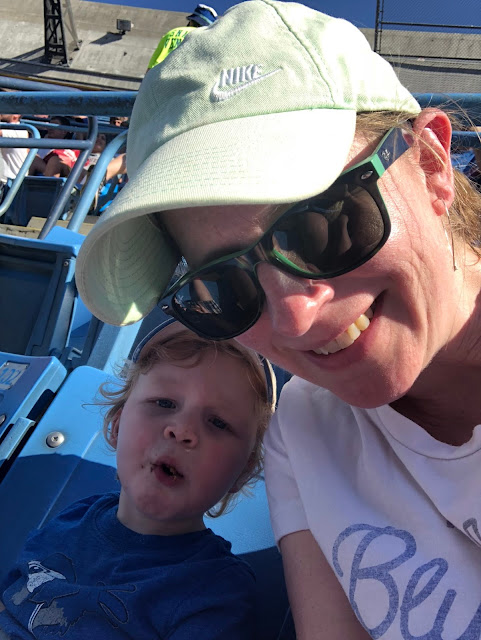 We shuttled children to the subway. 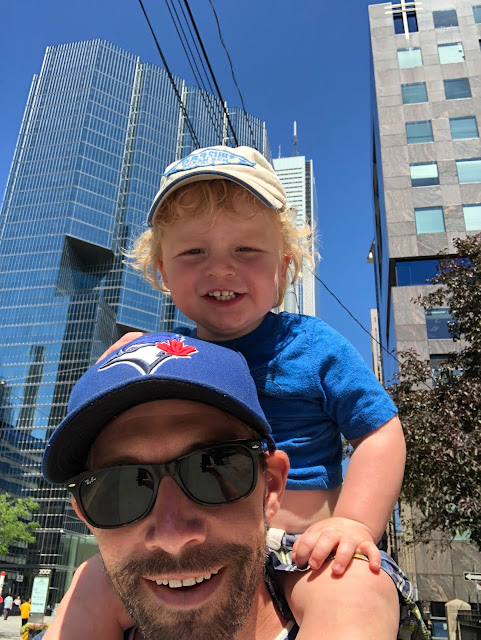 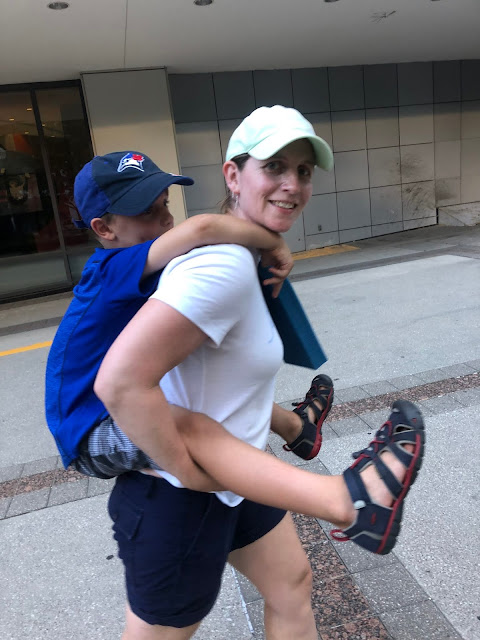 E found this foam J at the game, and the bucket has to come home with us too of course. 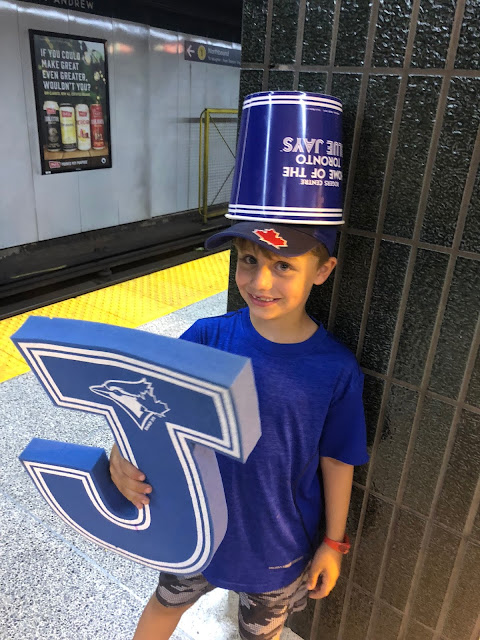 Everyone was hot and tired when we got home, but it was a good afternoon at the ballpark.

On Sunday morning Dave went for a long run and then took E to the driving range and mini-putt. 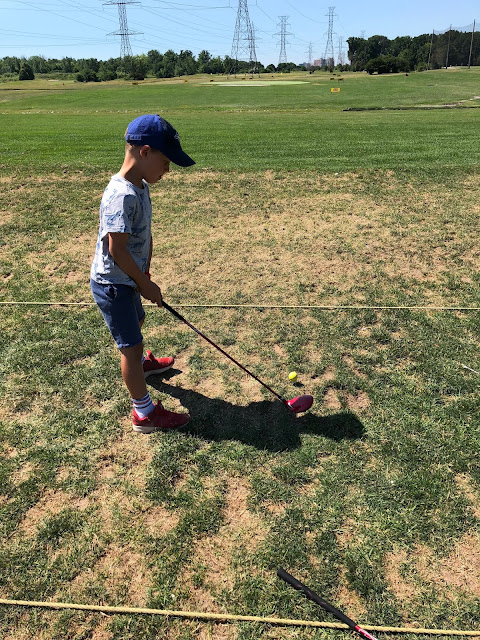 Meanwhile Q and I went for a walk to pick up some groceries and then stopped at the park on the way home. 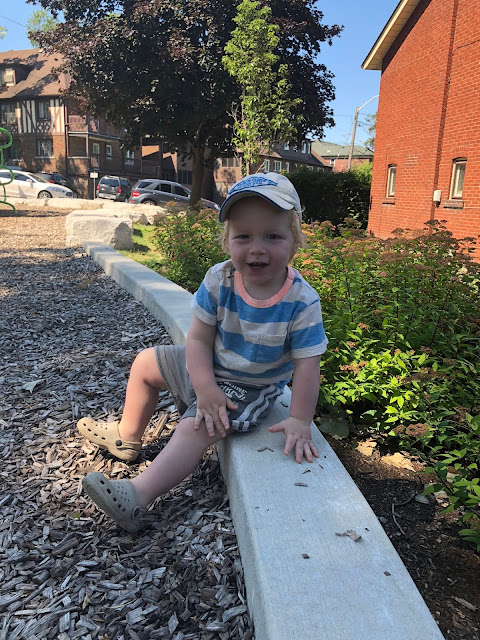 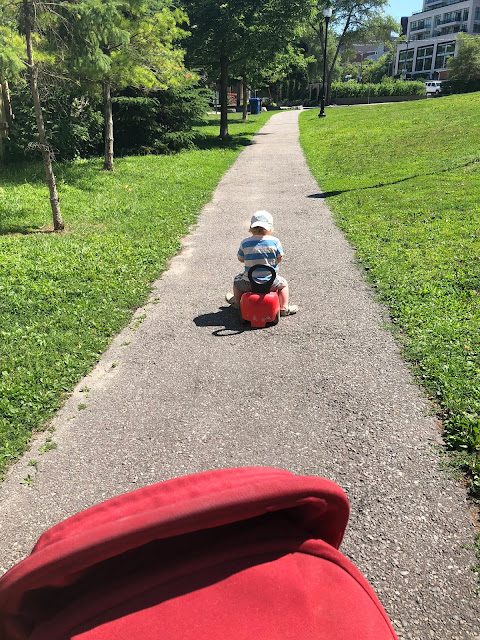 After lunch of BBQ'd sausages and pasta salad we got our pizzas prepped for supper because E had a t-ball game until 5:00 and we knew we wanted to eat quickly when we got home.  Dave made the crusts and I cut up the veggies and grated the cheese.

Dave was the head coach for this game.   They didn't have a full roster but it was all fine, some players just got to bat twice.

We were in charge of snack - watermelon and oatmeal chocolate chip cookies. 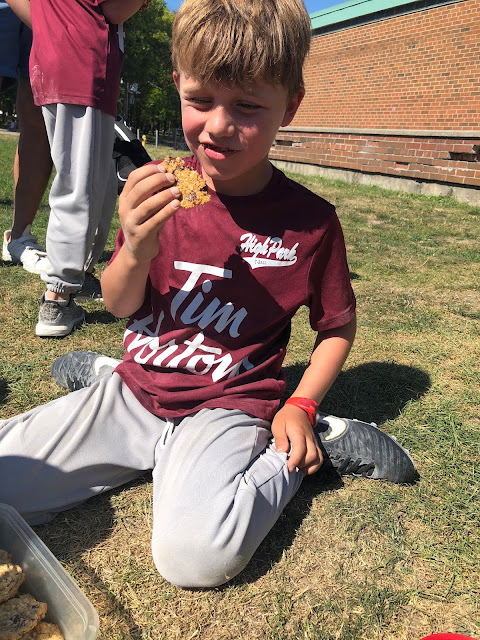 Great weekend with amazing weather - this is what it's all about!