E had a t-ball game on Friday night so after a quick supper, he and Dave headed to the game, while Q and I picked up our grocery order from Loblaws.  He is pointing at the train going by while we sat in the parking lot. 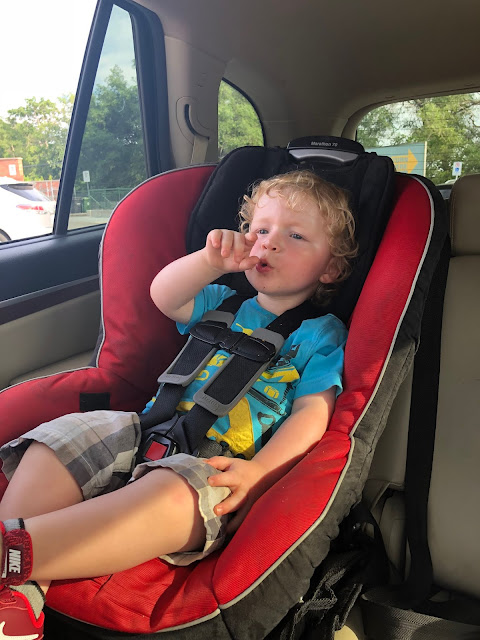 Then we split a popsicle when we got home. 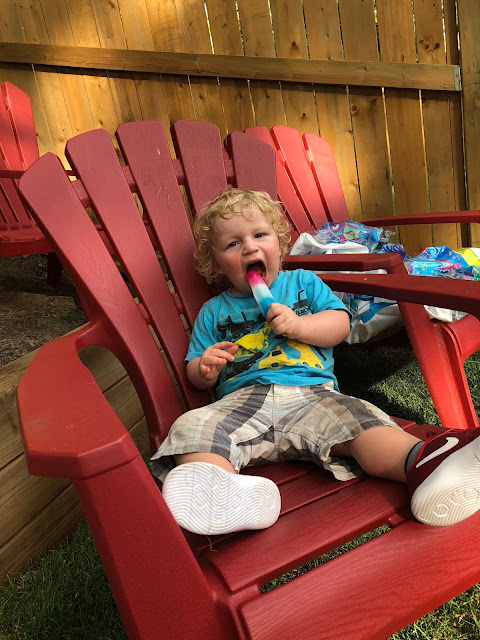 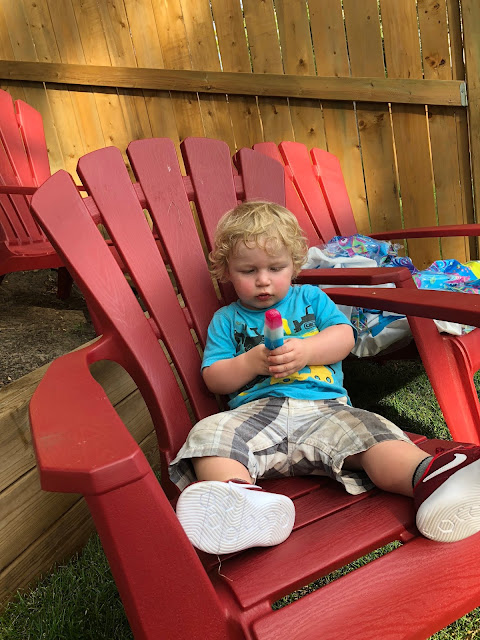 After the boys got back from the game and the kids were in bed, Dave and I watched A Quiet Place and part of Blockers.

I got up early to go to my workout class and after a quick breakfast and shower I walked up to get my haircut and do a few errands.   I just got a trim so not much difference, but it felt good to get the ends cleaned up. 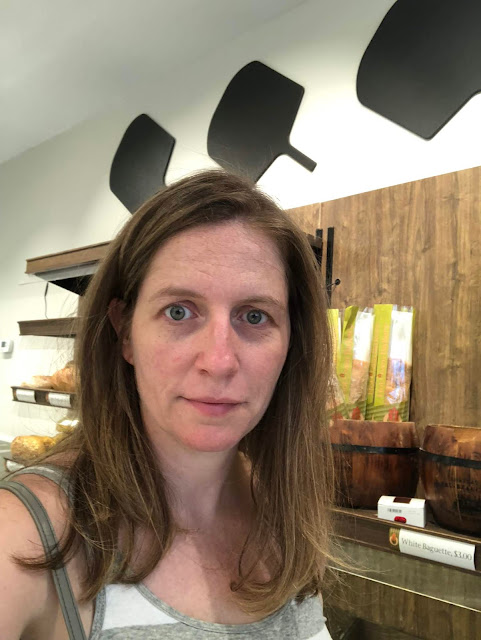 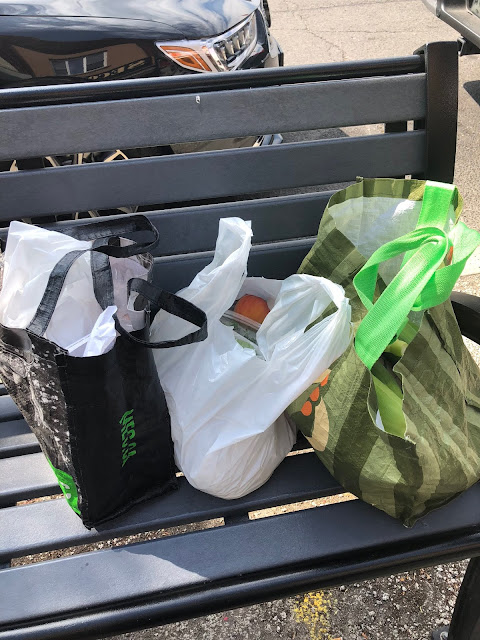 When I got back E had a friend over to play and then we had lunch.  E had another t-ball game so off he went again.  While Q napped I tided the kitchen, folded laundry, watched some golf and baseball, and then vacuumed.  When everyone was back and awake, we played in the backyard.
My yoga mat drying became a tent. 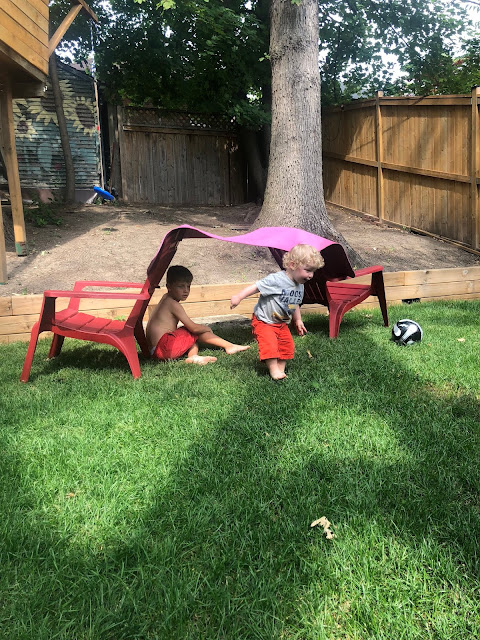 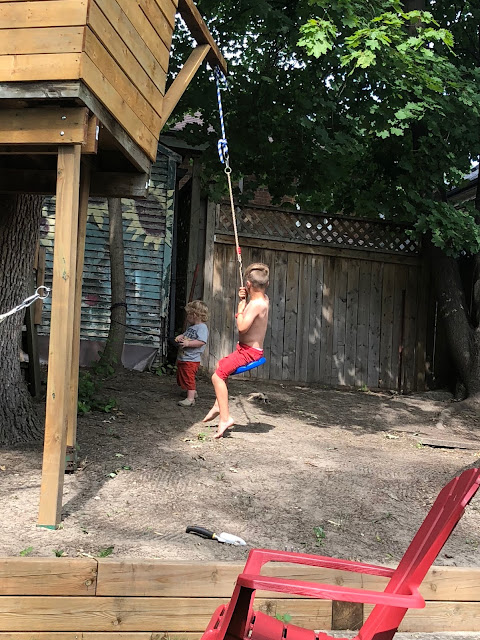 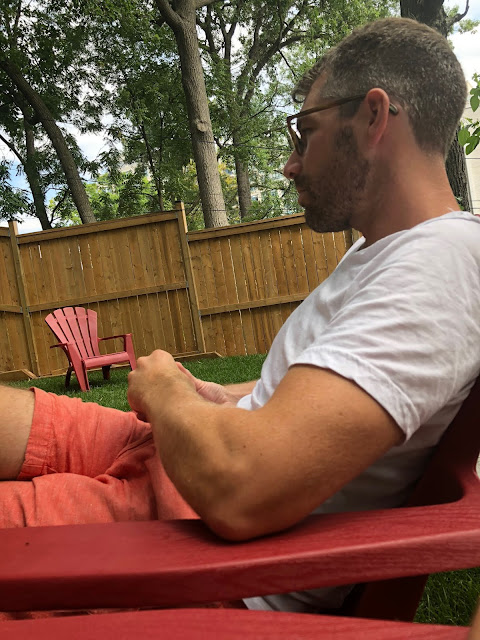 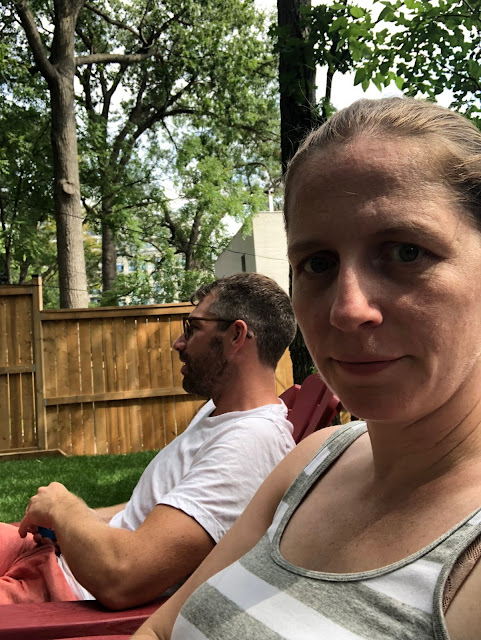 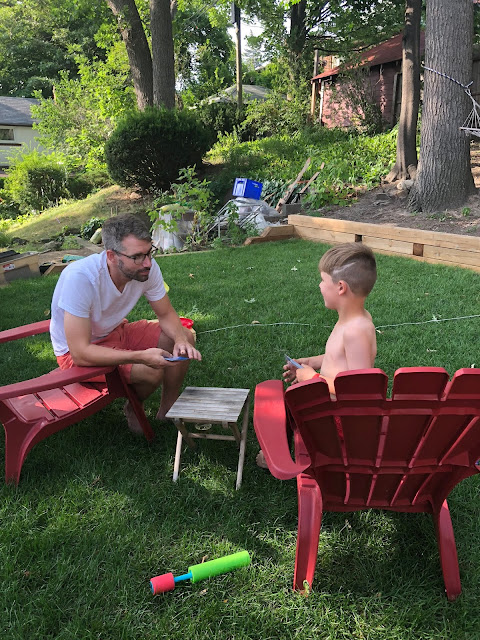 I made a salad with arugula, nectarine, snow peas and a lemon-mint vinaigrette and we just grilled some chicken and potatoes to go with it. 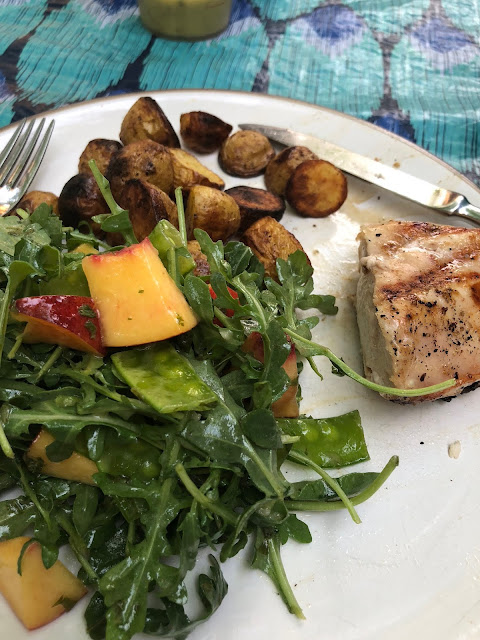 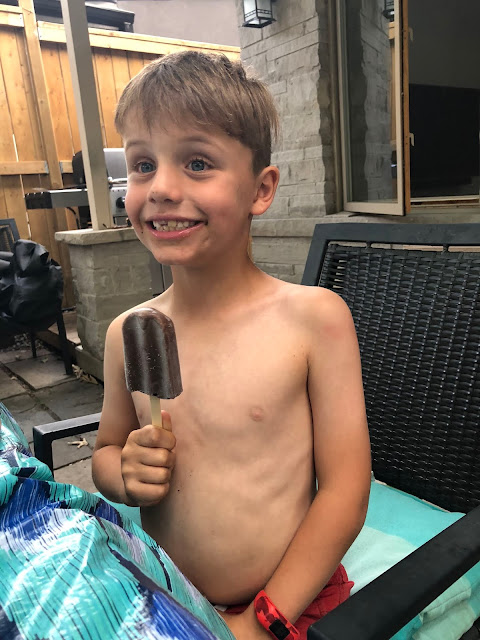 Yes that's ketchup above his eye. 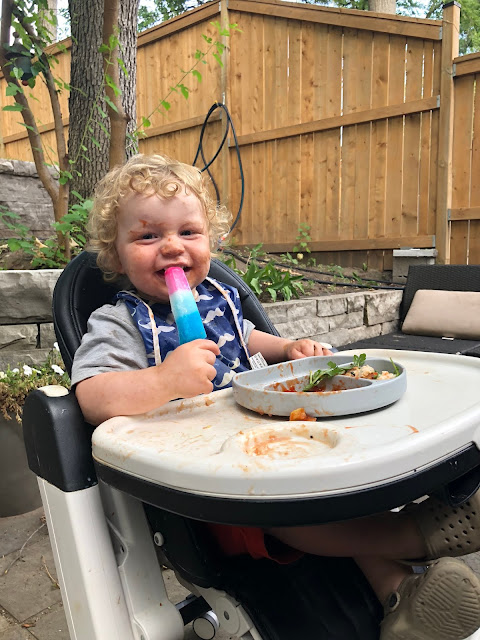 We were supposed to go to the beach at Centre Island on Sunday but we woke up to a rainy day.  Fortunately The Open was on so we tuned into that.

We took a little walk in the rain just to get outside. 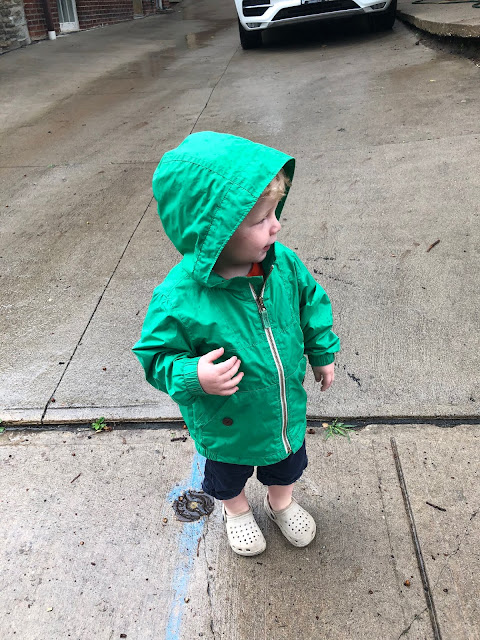 We enjoyed our picnic lunch at home instead of at the beach. 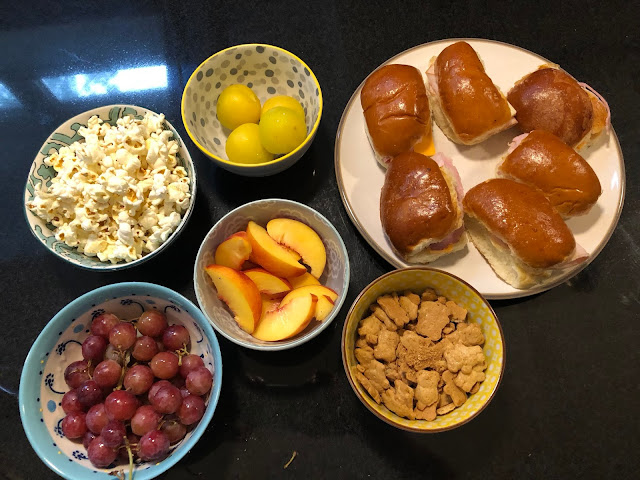 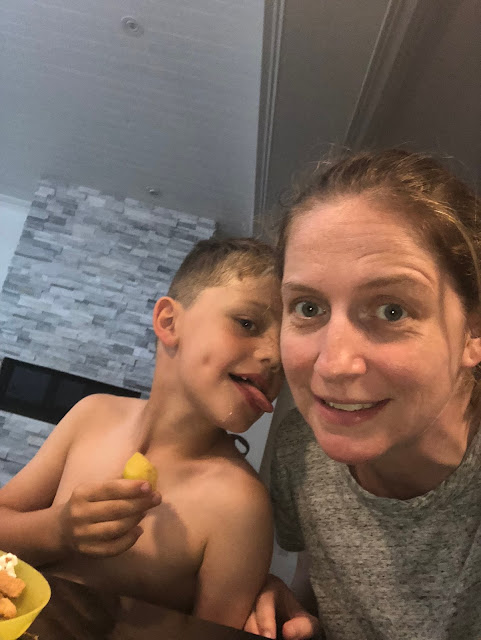 He deconstructed his sandwich to get the cheese out. 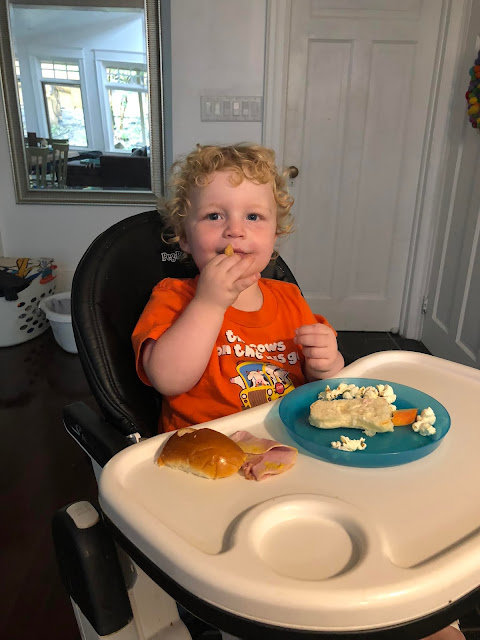 We made some cupcakes and then E, being inspired by the Netflix show Sugar Rush, decorated them with a campfire theme.  It's hard to know what little details were actually suggested by Dave and I, but the main idea was his and he was right into the decorating. 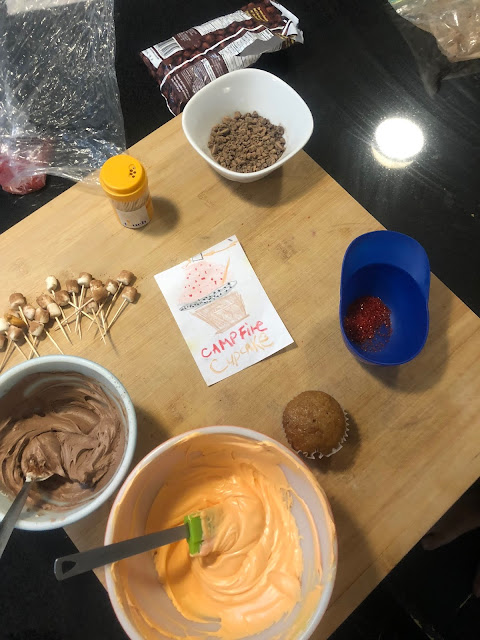 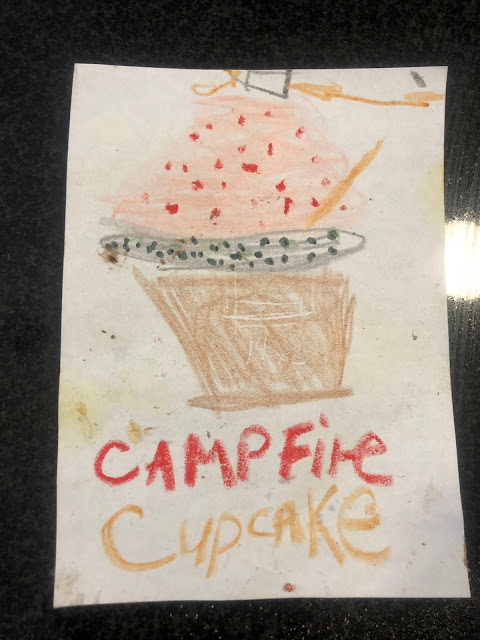 The cupcake was a carrot cake, representing the flames of the fire.  The topping included brown frosting and crushed chocolate chips as the coals and wood of the fire.  The orange frosting and red sprinkles are the fire.  This is topped by toasted marshmallows (mini ones rolled in cocoa) on a toothpick.  He did a great job and had fun! I am not one for crafts/projects so Dave helped him with the execution and they made a good team.  I have a hard time letting E do his own thing even if it is not perfect and I don't like messes, so I took Q for another walk to the park and still got to enjoy the fruits of their labour. 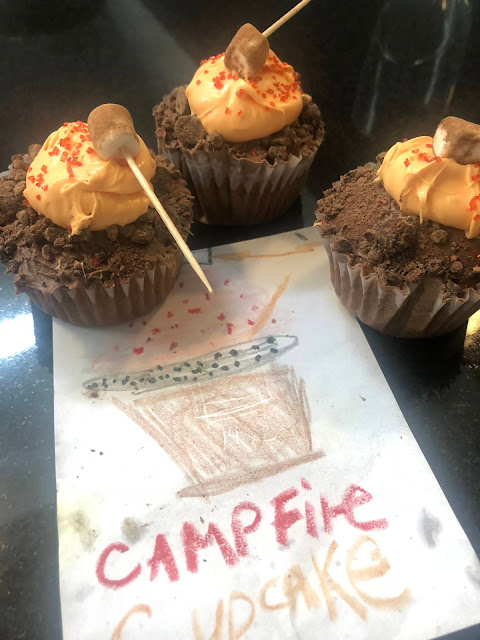 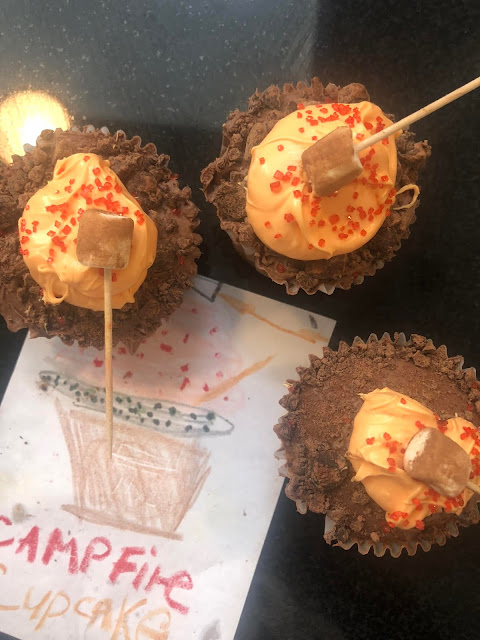 After supper I went to yoga and then we ended our night with the Quebec episode of Anthony Bourdain's Parts Unknown (I think the first time he went there).