On Friday night after supper, I took E swimming at the Sunnyside Pool.   It was very refreshing and we had a good time. 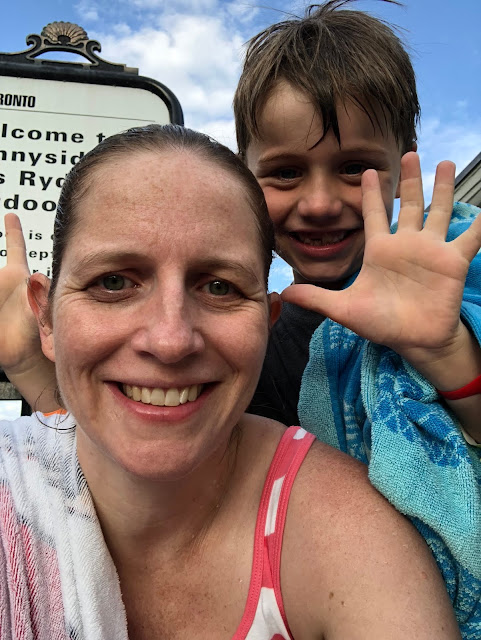 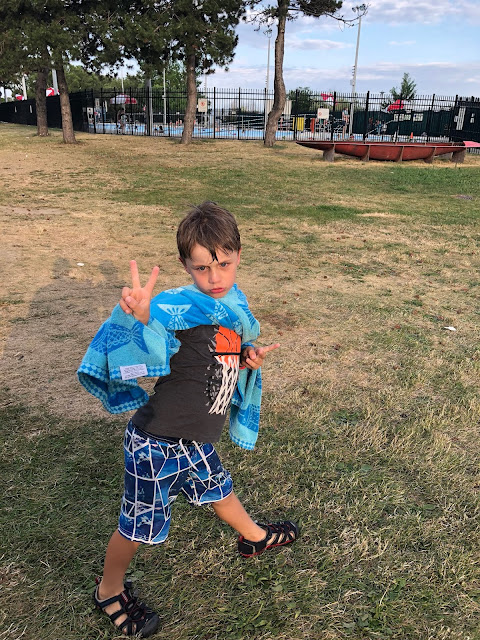 Minion popsicle and a ride on the dinosaur before we left. 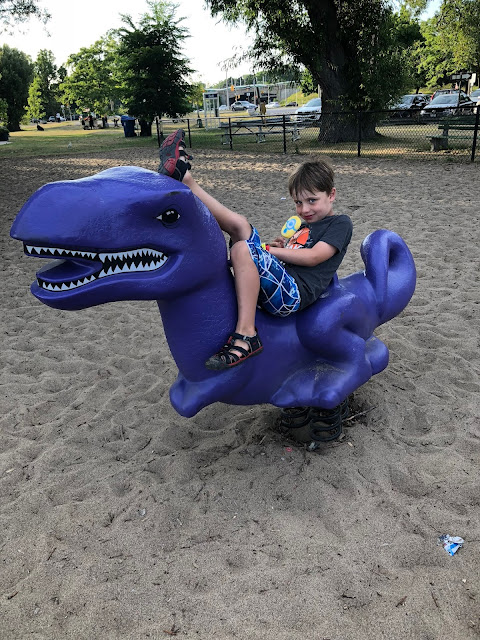 On Saturday morning I biked to my workout; it was such a lovely morning to be out early.  When I got back, I made my breakfast and took it outside to eat.  Although he had already eaten, Q was sniffing around for a few bites of my toast. 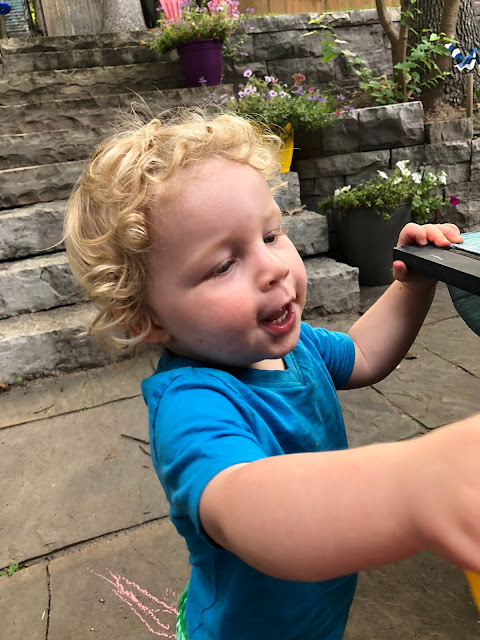 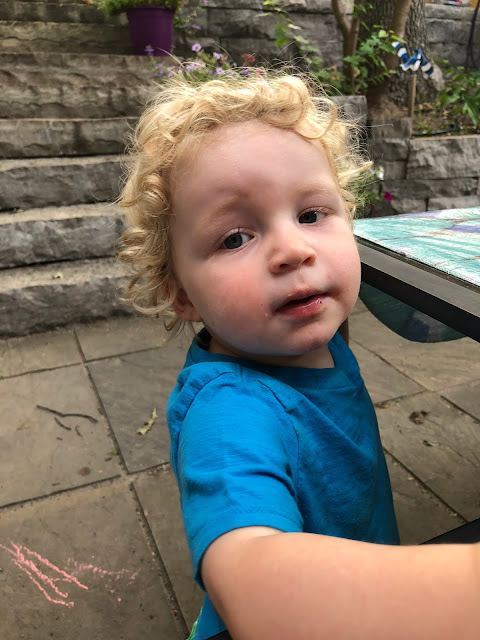 We walked up the street around 10:00 to see what the Bloor West Street Fest had to offer.  Bracelets for the rides were only $5 so we got one for each of the boys.  Good thing they were only $5 because Q lasted on the bouncy castle for less than 30 seconds. 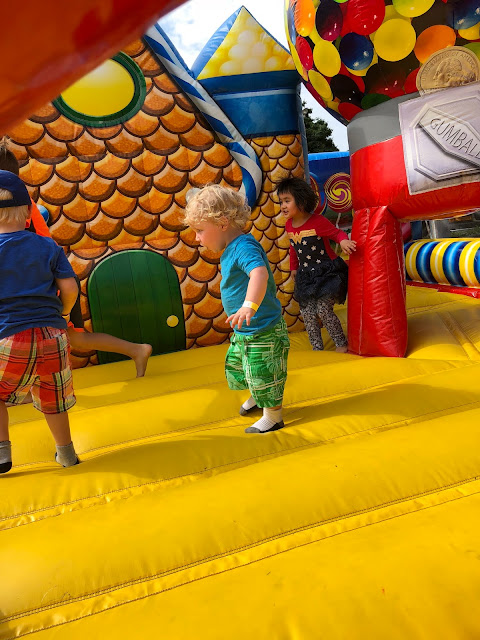 E tried all the rides a few times, and we ran into some friends from his t-ball and soccer teams. 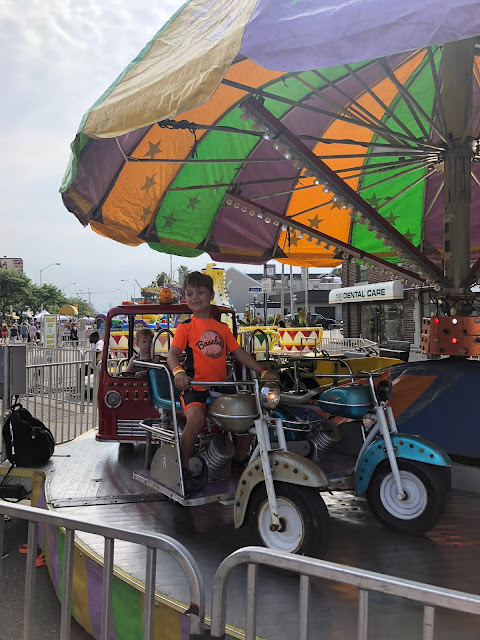 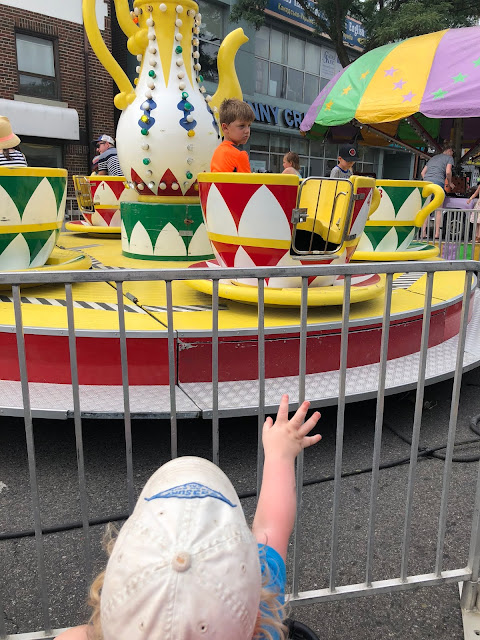 We settled in for the President's Choice Super Dogs Show. 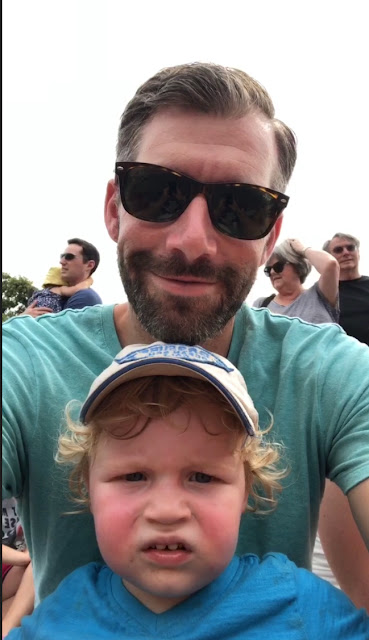 We were right up front and Q loved it, even with the dogs running right up to his face sometimes. 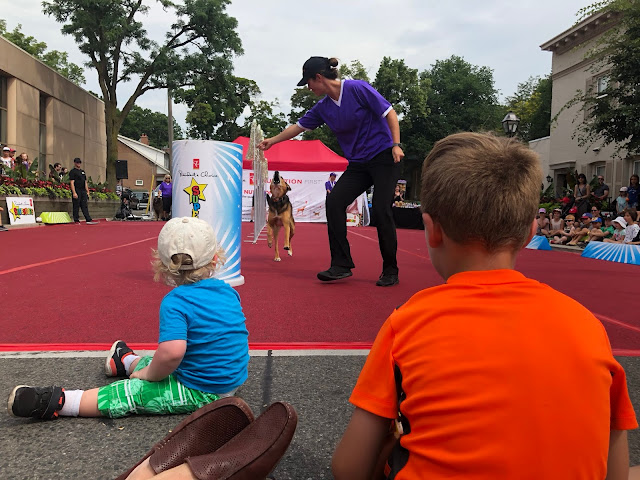 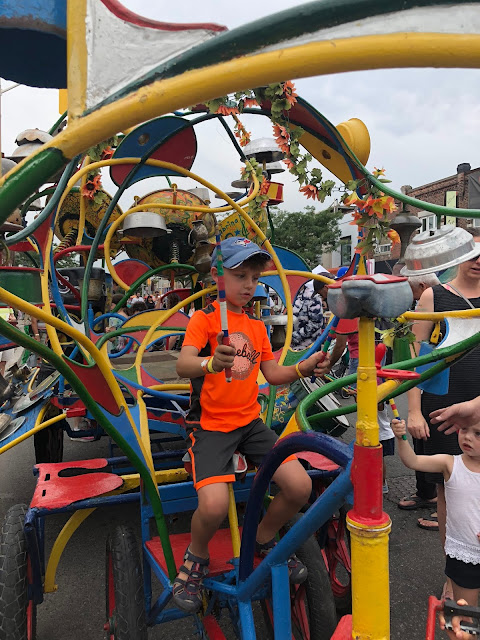 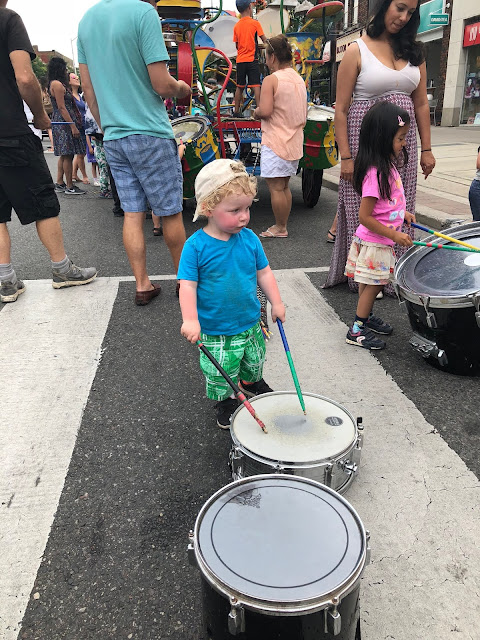 We were going to get a sausage from the Kingsway Deli for lunch but the line was way too long so instead we had a gyro from the new Greek place.  When we got home Dave and E went to Home Depot to get some supplies for making washer toss.  They set to work on that and I went to the grocery store. 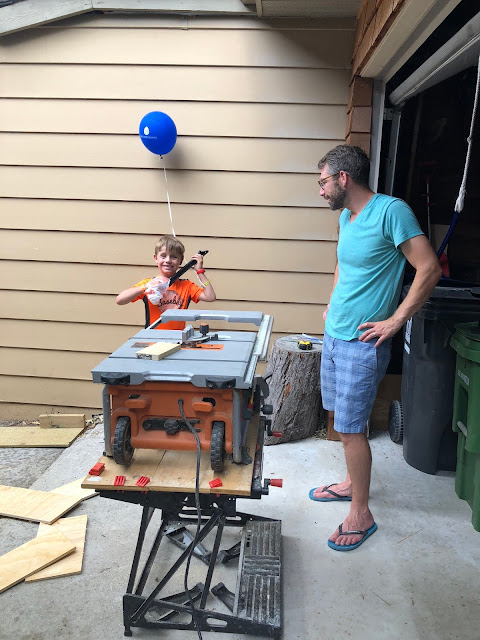 We had grilled chicken and salad for supper, and then some popsicles.  This was better than going back up to the Street Fest when it was so hot. 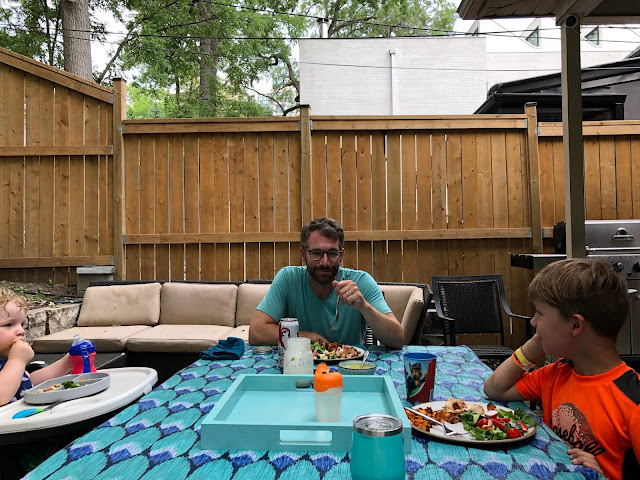 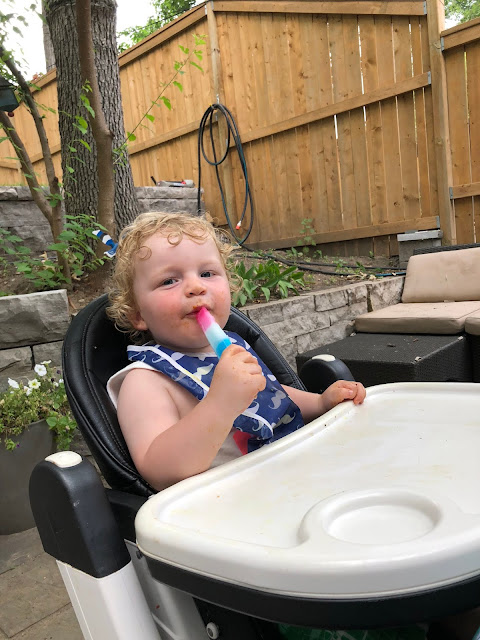 A little soccer before bed. 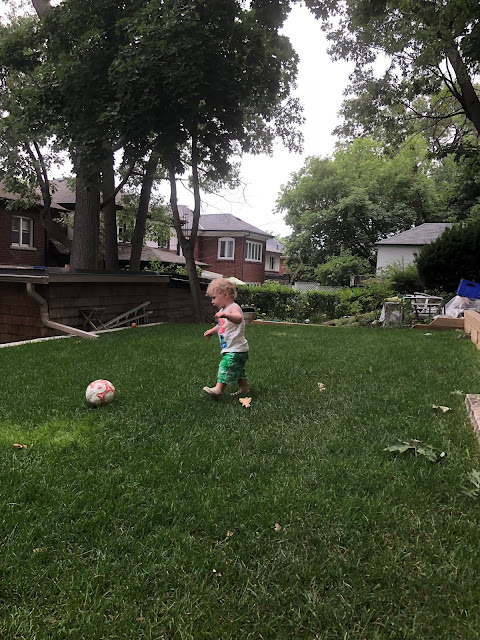 On Sunday morning I went to church.  We were having a special service as part of the Affirm United Conference.  We had lovely music, as always, and a guest speaker.  See the rainbow ribbons hanging from the tree. 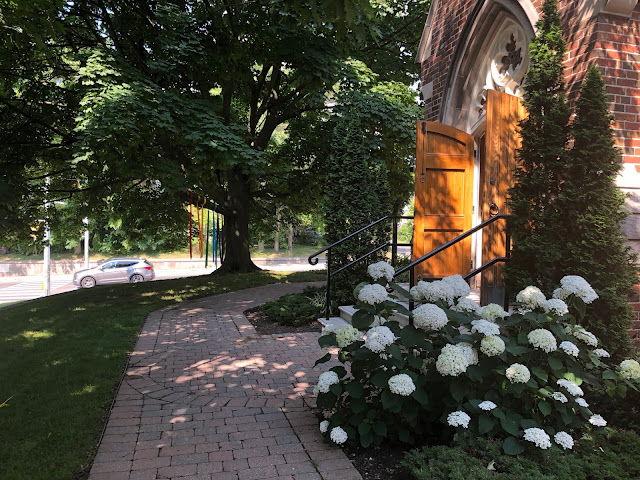 While I was gone, the boys broke in the washer toss and got the kiddie pool out. 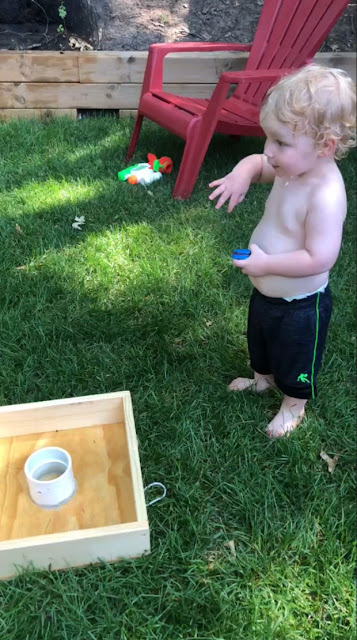 Q had his nap and E went to his t-ball game and then a birthday party, so I helped myself to a fudgsicle and read my book outside. 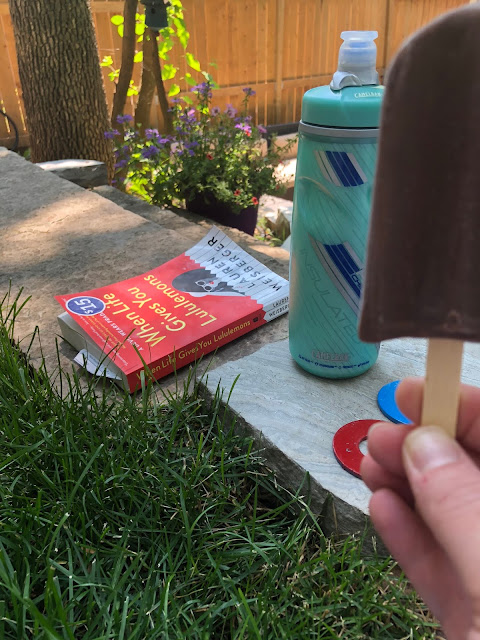 We played more washer toss, jumped in the pool, and had a few beers. 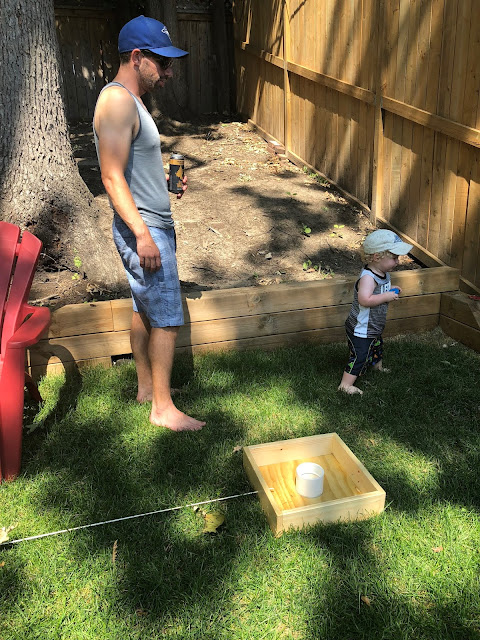 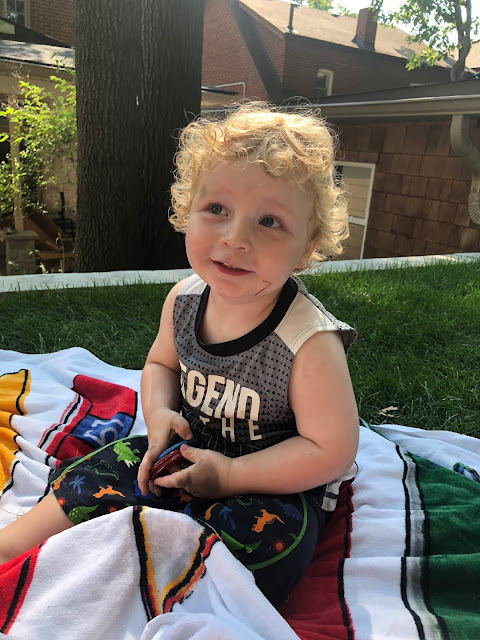 E had a great time at the party.  It was at The Monkey Vault with lots of things to jump on and off. 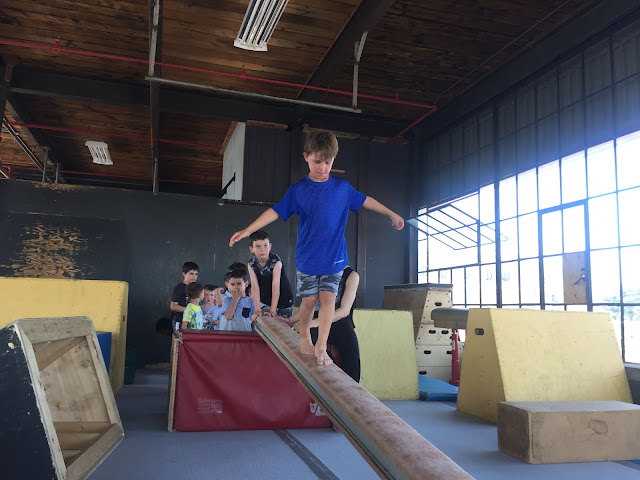 I made beer butt chicken for supper, we had a family water fight, and then Dave and I watched The Handmaid's Tale season finale after the kids went to bed.  A successful weekend!