After another busy week at work, I came home to some homemade steak fajitas made by Dave.  Dave's parents had taken E to to the aquarium for the day so he was pretty tired.  I went for a run after supper.  We watched one episode of a new Netflix show, Narcos, and then I went right to bed.

On Saturday we all got on our bikes and went to Centreville on the Toronto Islands for the second time this summer. (See our first visit here.) It was busier this time but still pretty fun. 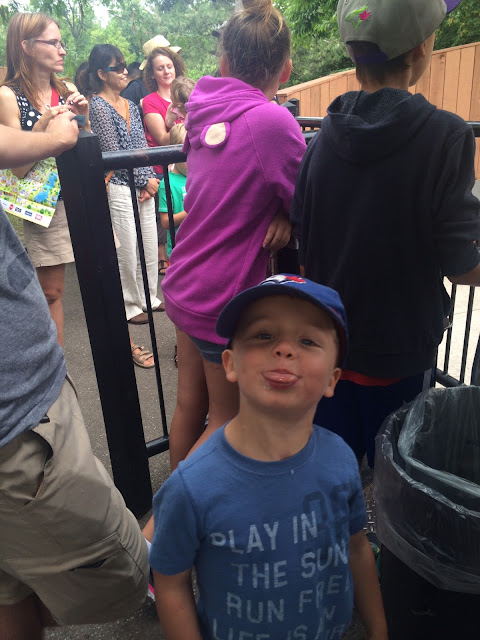 Waiting in line for the first ride 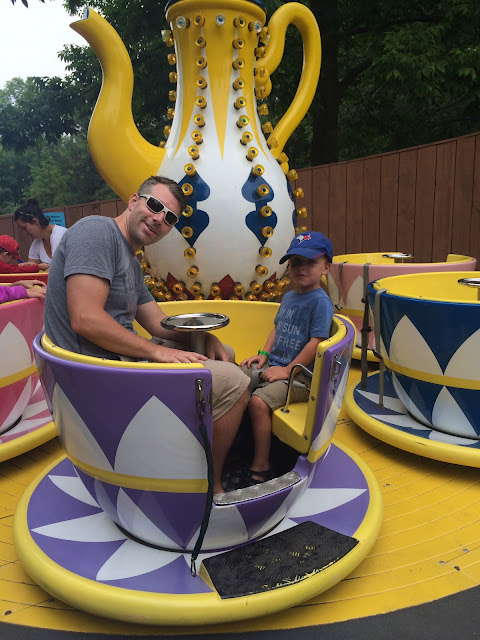 Tea cups.  Last time Dave and E both had bracelets, but this time only E had a bracelet and we got a bunch of tickets so we could take turn on the rides with him. 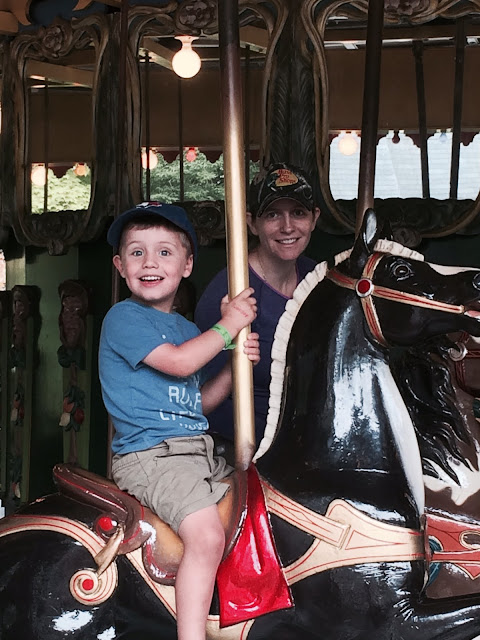 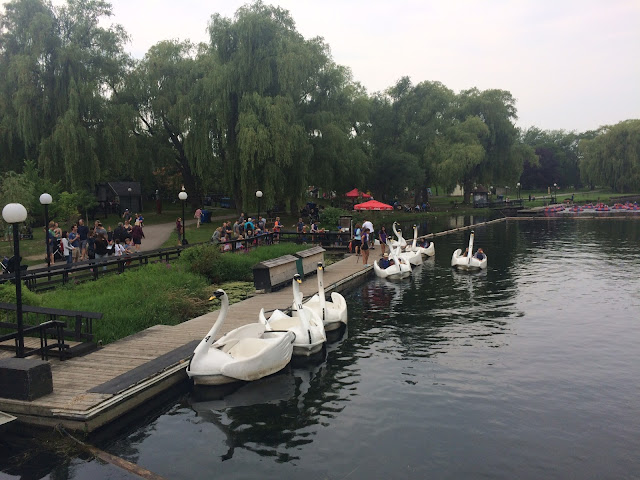 E and Papa in line for the swans (I realize you can't really see the, but I wanted to get a picture of the whole scene) 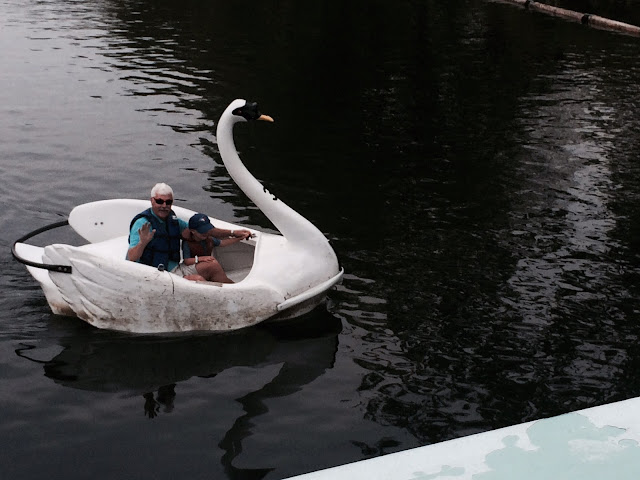 There they are (fighting over who gets to steer) 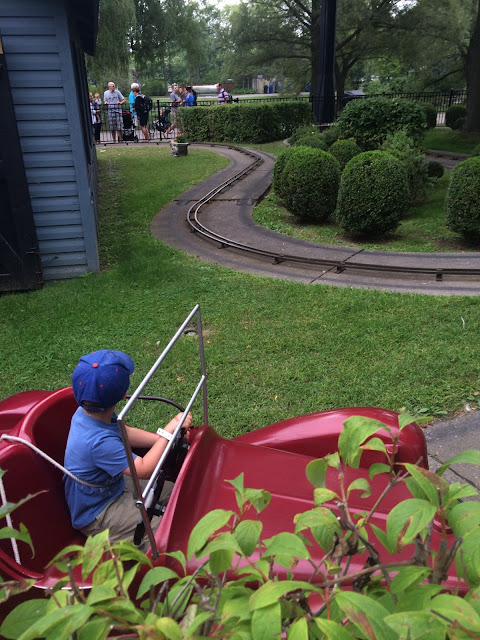 One of E's favourite rides, the cars that he gets to "drive" 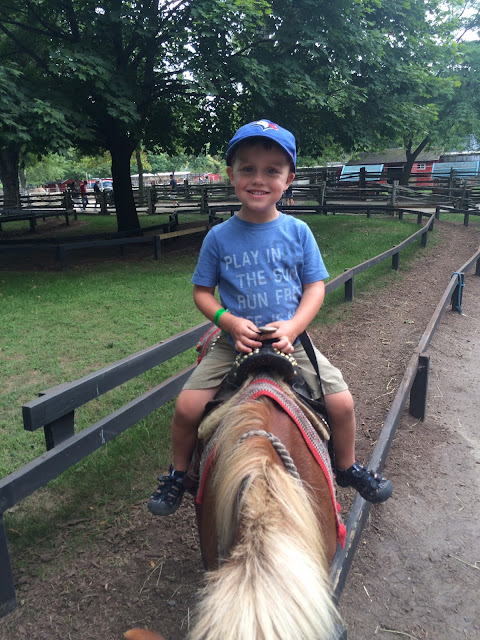 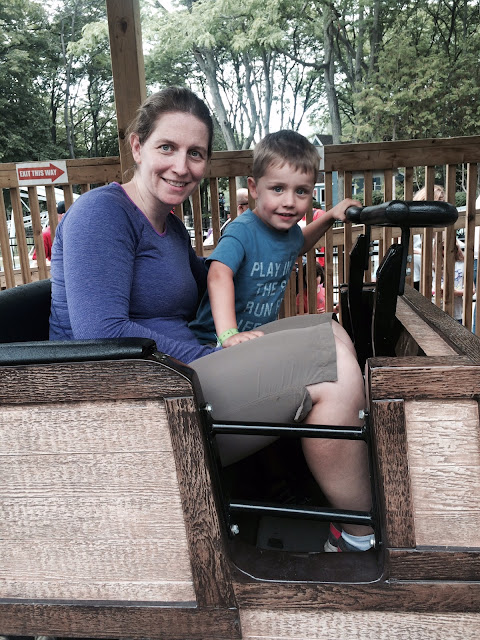 This time I went on the roller coaster with E 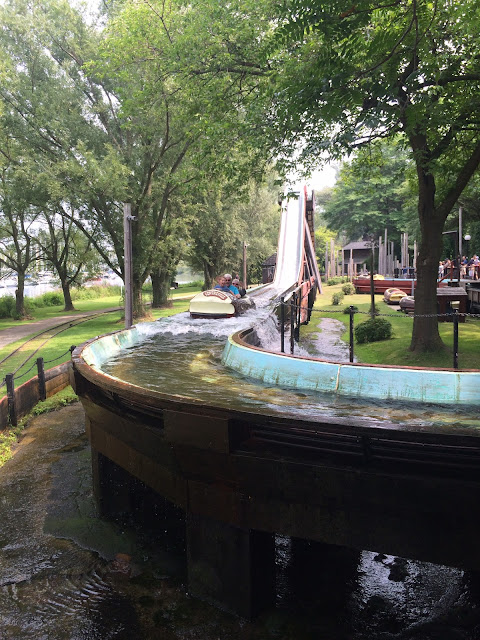 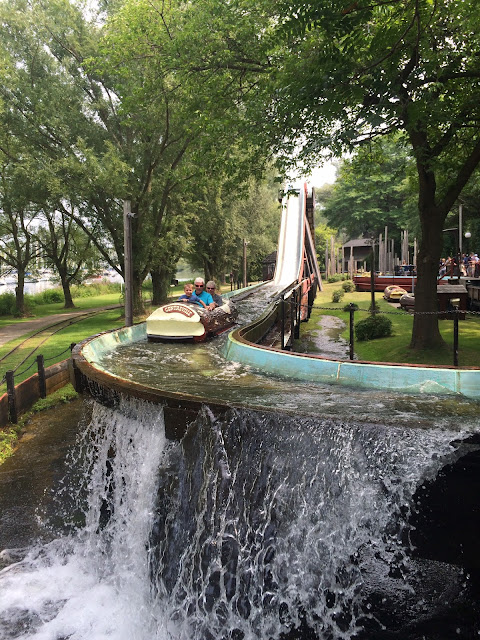 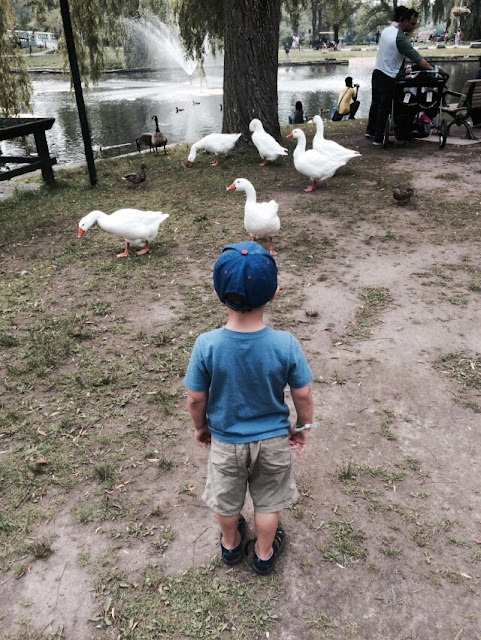 These geese were waiting around like extras for a nursery rhyme

After spending the morning and part of the afternoon at Centreville, we explored other parts of the island.  Dave had found The Franklin Children's Garden (yes, Franklin the Turtle) on the map so we went there first.  It had some beautiful flowers with some bronze statues and a children's activity garden. 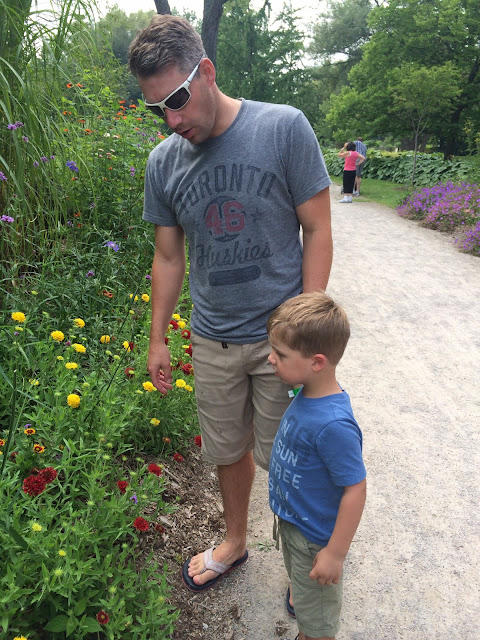 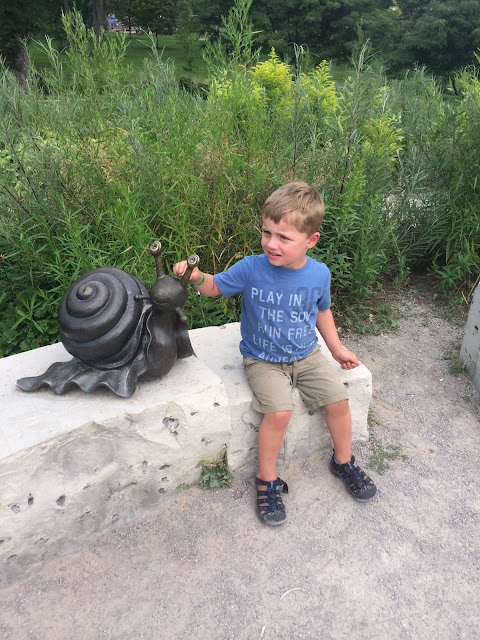 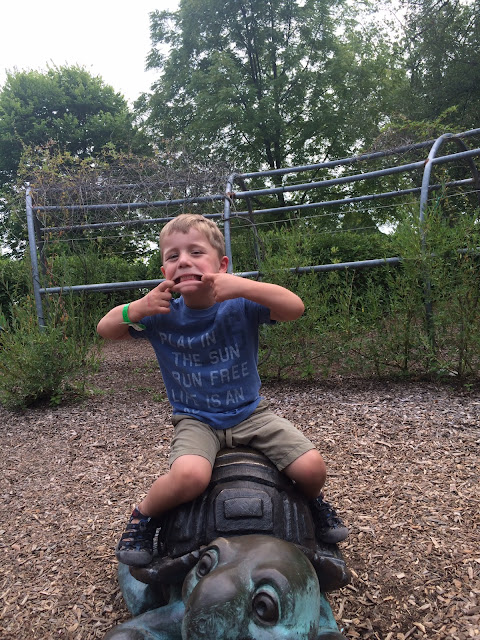 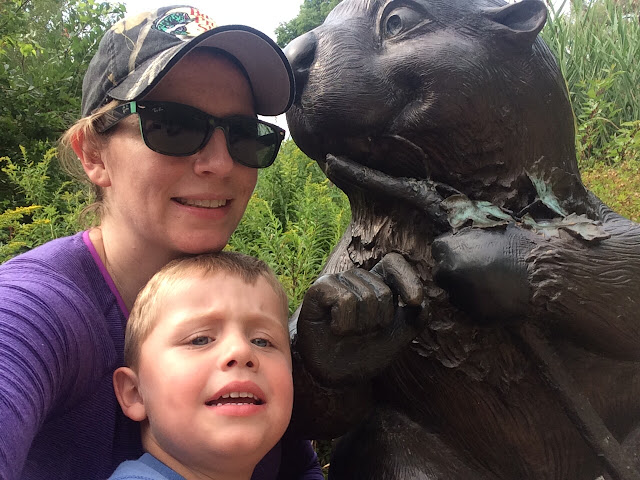 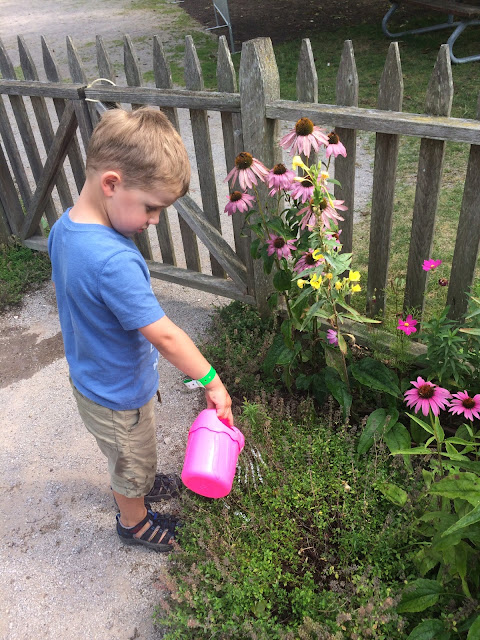 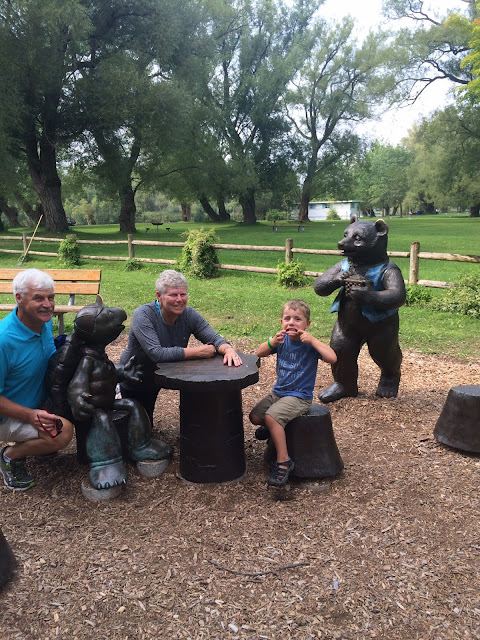 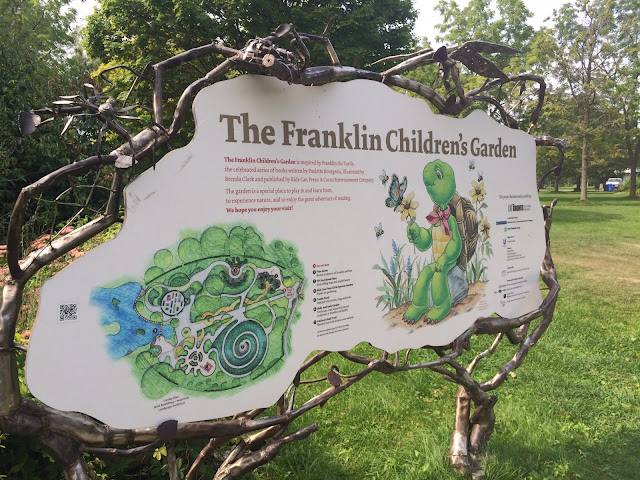 Definitely a worthwhile trip for small kids when you're on the Toronto Islands.

We rode through part of the neighbourhoods on Ward's Island and the beaches.  It's really neat to be on the island and to still be so close to downtown Toronto.  Our ride home was good although the hill up to our house was challenging for everyone (except Dave) so we were happy to get home.  I put together a quick supper with food we already had in our cupboard.  Then we made ice cream in our new ice cream maker.  It's in a ball form so you have to roll it around on the floor to mix it up.  E loved that part and liked the ice cream. 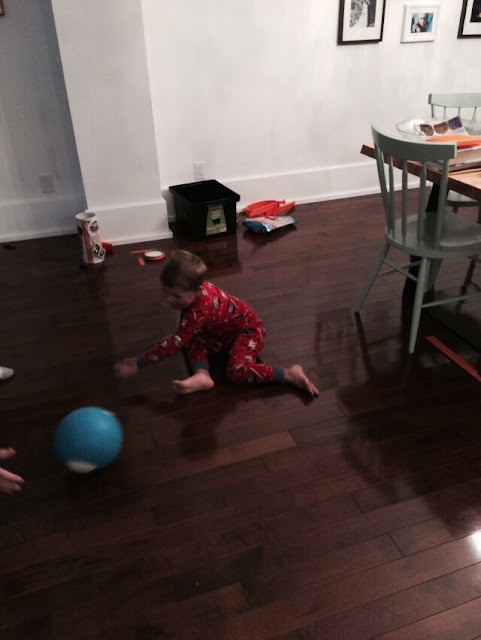 On Sunday I went for a run and then came home to make pancakes.  Then Dave and his parents went to Costco (and came home with enough paper towel for at least one year), and E and I walked up the street for our usual errands.  After lunch he headed to Sarnia with Dave's parents for the week.  We will miss him but he says "don't worry we will face talk everyday".  He means FaceTime.  Too cute. 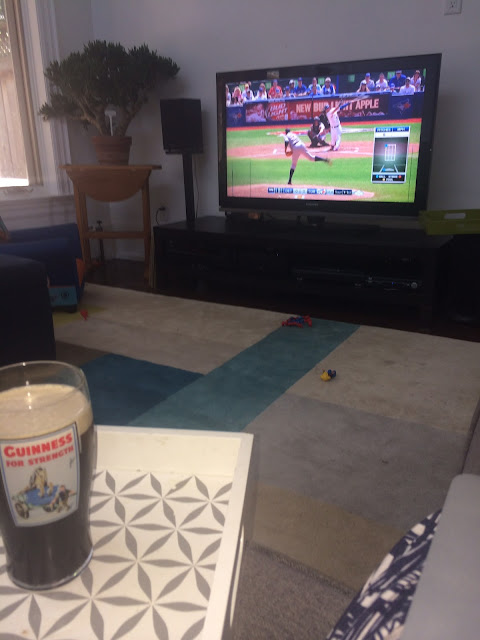 So this was pretty much my afternoon - a drink, the Jays, and some blogging.

In the late afternoon, we went to my boss's house for a garden party with the other lawyers and our spouses.  We usually bring E with us and he gets to swim in the pool.  This year we missed him but it meant we could talk to more people instead of keeping track of him. 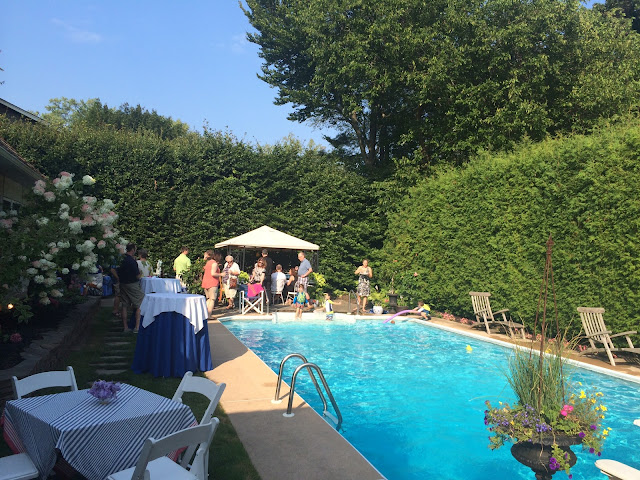 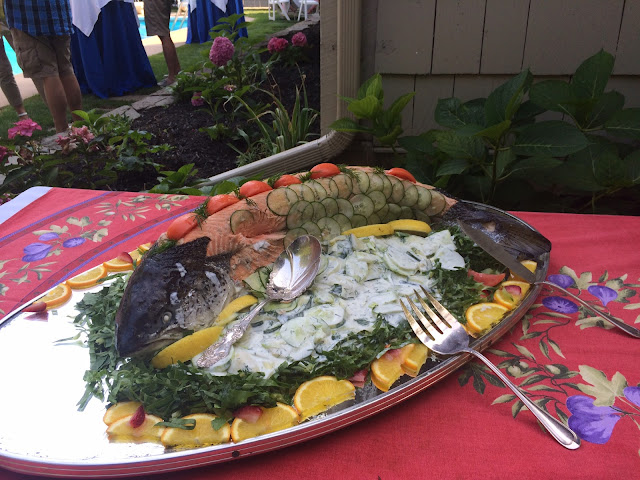 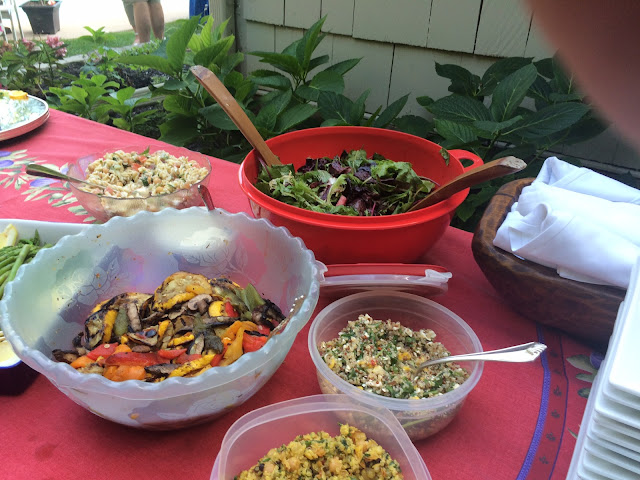 That's my salad in the red bowl, Roasted Beet, Pear and Feta Salad 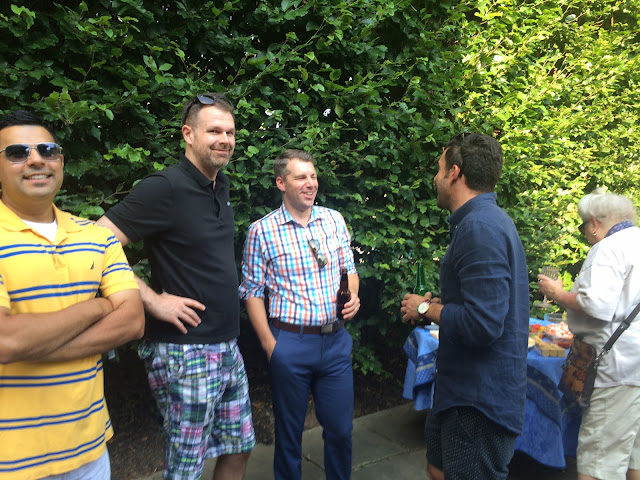