This is a two part Media Wednesday.

First up, is my book club book review.  This month we read Outline by Rachel Cusk. 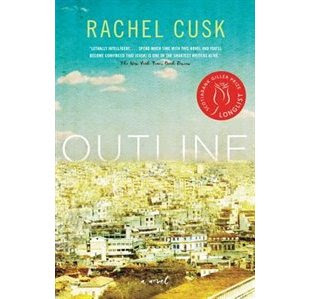 It is not a book I would recommend.  I only finished it because I thought I should for book club, but not because I was enjoying it.  It is Giller Prize finalist, which would usually be something I enjoy.  This book, however, lacked an actual storyline, so even though the language used and the descriptions were lovely, there was little to no continuity between the (long) chapters.  The general story is a British writer is spending a week in Athens to teach a writing course.  But the book isn't really about her, it is about the people she meets on this trip, some friends, some strangers, and the stories they have to tell.

During her first writing class, I felt like the comments made by the students were a commentary on her book.  One of the students talked about how their "consciousness...was so crammed full not just of her own memories, obligations, dreams, knowledge and the plethora of her day-to-day responsibilities, but also of other people's - gleaned over years of listening, talking, empathizing, worrying...".  Then she goes on to tell a story about a story her sister told her about a friend of a friend.  So it was not in anyway her own story to tell, but it was the one that came to mind.  I wondered if the author of the book chose to tell stories of other people because they were more interesting than her own stories.

To end the chapter of the first writing class, one of the students, says "she had been told this was a class about learning to write...she didn't know what had been achieved here, and she wasn't all that interested in finding out...I don't know who you are, she said to me, getting to her feet and collecting her things, but I'll tell you one thing, you're a lousy teacher".  I read this instead as a message to the author but replacing "class about learning to write" with "novel", and "teacher" with "writer".  This was only half way through the book, if I had left the class/book like the woman in the story, I wouldn't have missed out on much and would have saved myself some time.

Aside from a few interesting passages and lines (that were all independent of each other), I didn't enjoy the book.

The second part of this post is in honour of the last episode of Downton Abbey.  I am really going to miss the characters, but thank goodness for You Tube clips.

(some repeats here, but still good)


Something about seeing the cast being real people brings me great joy.


I found Tom, Mary and Anna on Instagram so I can "keep up with them" even though the show is over.
Posted by TorontoSAM at 6:00 AM