This link up was actually last week but I was writing about our trip to Nova Scotia so I just thought I would write it up today.

Keeping in mind that school starts in less than three weeks (!), we are writing about how we pack lunches.  My lunch packing for E did not stop during the summer, although I have a two week reprieve coming up, since he needed snacks and a lunch for his camps, but I do feel like I'm ready to start fresh for the school year.

The first year of school I made ham and cheese sandwiches almost everyday, and then E asked me at the end of the year if I could stop making those.  I don't blame him but when your school doesn't allow peanut butter, sandwich options are limited.  The second year I tried mixing it up a little bit, but a few things (like the pita wraps with hummus and vegetables) did not work out so well.  I was even so proud of myself for making a pizza pasta salad for his first day of school and then when I gave it to on the second day, he said "but I had that yesterday!".

Last year we settled into a good groove and I think I will continue with these items:

- Ham and cheese sandwiches (every few weeks won't hurt him!)
- Sunflower Butter (you can find this in the natural food section of most grocery stores) and jam sandwiches (some schools don't allow anything that looks like peanut butter even if it isn't, but I haven't had any issues, I wrote a note the first few times I sent it and now E is old enough to tell people it's not PB)
- Fried Egg on a Bagel (I wasn't sure how eggs would go, but he likes it)
- Quesadillas (best if made the night before, E doesn't care if they are cold)
- Cheese and crackers (but the cheese has to be shredded and it is a little messy but good when we don't have any bread)
- Any leftovers kept warm in the Thermos
- Pasta with cheese and/or tomato sauce in the Thermos (we always have these ingredients so it is a go to)
- Toasted bagel with cream cheese and jam

Although I don't love prepackaged snacks, I must admit I fell into the habit of buying packets of apple sauce, fig bars, granola bars, and goldfish crackers and adding them to the lunch.  But my favourite things to add to a lunch are:
- Apples (E is old enough to eat these whole now, but I used to cut them up and sprinkle some lemon juice on them to keep them from turning brown)
- Pears (cut up, not whole since they are too fragile)
- Peaches (wrapped in paper towel and protected in a plastic container)
- Snap peas or snow peas
- Grapes
- Cherry Tomatoes
- Cucumber
- Homemade muffins and cookies (without nuts of course)

If something comes back uneaten, it goes back the next day. This is rare but does happen occasionally.  There have also been a few instances where E doesn't get a chance to eat his whole meal because he was in the bathroom and then got talking and ran out of time.

We will take advantage of the Lunch Lady service on Fridays - I pre-order online for a few months in advance and then they deliver the food to E at the lunchroom.  They also have the ability to buy white milk or chocolate milk so we do that too. 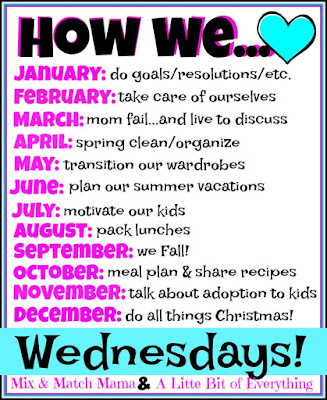 Labels: How We Wednesday